The Ku Klux Klan in Canada: A Century of Promoting Racism and Hate in the Peaceable Kingdom

In January 1930, a small group of white men drove to the home of a white woman who was allegedly living with a Black man in Oakville, Ontario, and kidnapped them both. This was the Canadian Ku Klux Klan in action: The captured man was not tortured and lynched; he was driven to his parents’ home and told to stay there. And the kidnappers did not disappear back into the murky depths; they were arrested on their way home, still dressed in their robes. Three were charged but only one was convicted — of wearing a disguise after dark — and fined fifty dollars. Their trial became a minor sensation, and the verdict was appealed, ultimately leading to a jail sentence for the Klan member, a Hamilton chiropractor. As for the couple, their house was torched — the Klan was suspected — but they reunited, married, and lived out their lives in the Toronto suburb. It also turned out that the kidnapped man was a war veteran and not Black after all; he was of Indigenous descent.

This episode says something about the nature of the Canadian Klan, an imported racist fraternity that, once here, took on a few of the distinguishing characteristics of the True North strong and free. Compared with that of the United States, as the former intelligence analyst Allan Bartley explains in The Ku Klux Klan in Canada, the “Canadian scene was similar — but not the same.” With the Klan came its structure and regalia and its unique, contrived vocabulary of klaverns, kligrapps, kleagles, and cyclops. Under it all lay a message of hate directed at non-whites, non-Protestants, and non-British people. It was “an organization foreign to Canada but one that found fertile soil to take root.”

In this thorough study, Bartley traces the origins of the Canadian Klan to the First World War and to the widely popular screenings of D. W. Griffith’s The Birth of a Nation. The three-hour silent film, with its depictions of hooded Klansmen on horseback terrorizing former slaves and northern carpetbaggers, is credited with sparking a Klan revival and with introducing the signature flaming cross. Canadian moviegoers by and large embraced the film, famously the first one screened at the White House, and the primarily white audience lodged few complaints over its flagrant bigotry.

Bartley documents the Klan’s appearance in the early 1920s and the establishment of its national office in Toronto, in 1925. Early leaders, or kleagles, actually came from the United States. Some were fleeing American justice and others merely saw virgin territory, where they could sell a handful of memberships and robes and then move on: “The opportunity to skim cash, abscond with cash or simply embezzle proved irresistible to the average kleagle.” The ineptness, scheming, and other shenanigans of the new arrivals would be laughable if their message of hate weren’t so offensive. 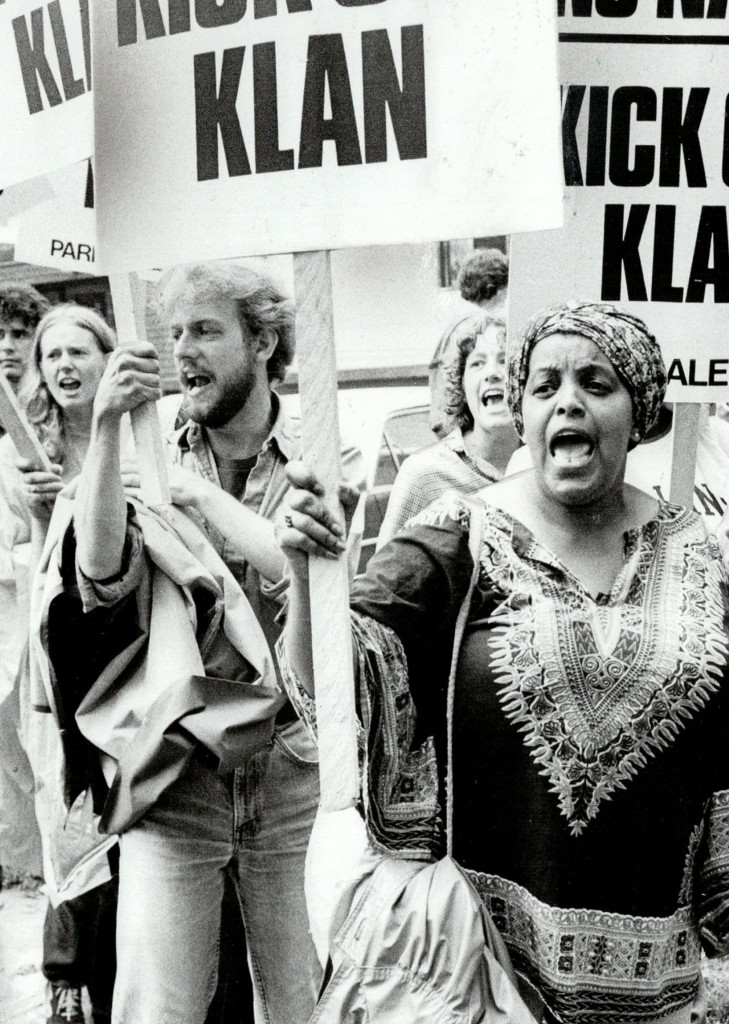 There were always those who stood against it.
Image by Michael Stuparyk, 1981; Toronto Star; Getty Images

A kind of pattern emerged as the Klan dipped into this country’s deep well of religious and linguistic animosity between Protestants and Catholics, English and French. The first stop for most organizers was the local lodge of the Loyal Orange Order, the staunchly pro-British fraternal group. Selling itself as a “good Protestant organization,” the KKK would launch a recruitment campaign, perhaps even renting the town’s Orange Hall as its local headquarters. Next came the initiation ceremonies, parades through town, and the cross burnings, which were part public spectacle and part threat — intimidation aimed at Catholics, Jews, racial minorities, immigrants, and francophones. Public support tended to fade rapidly, especially if the Klan actually engaged in violence, and there was considerable opposition from local and national newspapers, community associations, activists, prominent individuals, and even some politicians. Everywhere the Klan appeared, at least in Canada, there were people who stood against it.

Nonetheless, KKK branches in Nova Scotia and New Brunswick followed the Toronto office, and cross burnings dotted the Maritime countryside for much of the 1920s. Rallies, parades, and cross burnings that were staged across Ontario attracted crowds in the hundreds and sometimes in the thousands. In the West, the Klan took positions on gambling, prostitution, and public morality, and its members were willing to lie, cheat, and intimidate to get their way. In British Columbia, it was those of Chinese, Japanese, and South Asian backgrounds who were the focus of intimidation, threats, and attacks. In the Prairies, it was the Catholics who were the main target of the Klan’s wrath, with Jews and anyone who couldn’t speak English not far behind. Only in Saskatchewan did the Klan turn to direct political activity, helping to defeat the supposedly Catholic-loving and pro-immigrant Liberal provincial government of Jimmy Gardiner, in 1929.

By the end of the decade, the Canadian KKK had begun to fade away. That did not mean that racism and bigotry left with it; those things had never needed the Klan to flourish, and they would continue after the Klan had gone. But the organization’s Canadian roots were not that deep; certainly there were more-established groups drawing on religious bigotry, anti-French nativism, and anti-immigrant feelings.

Secrecy makes it hard to ascertain how many Canadians joined the group, but deeply committed members were probably in the hundreds, somewhat active members in the thousands, and occasional participants in the tens of thousands. Even if most of them eschewed violence, there were enough to perpetrate, or at least condone, threats, vandalism, and in some cases physical attacks. But, as Bartley argues, the Canadian Klan was far less violent than its American counterpart. Its impact in Saskatchewan notwithstanding, it never played an outsized role in everyday life or politics as it did in the U.S. Even when it tried, it was far less influential than the more mainstream Orange Order.

The Klan largely disappeared from Canada in the 1930s and returned only in the 1980s, somewhat surprisingly, in reaction to the Charter of Rights and Freedoms brought in by the Liberal government. Like its predecessor, this modern Klan never seemed to get off the ground.

A small number of thugs and misfits (many of whom were ex-military) had big dreams of a “whites-only” country, but they could not organize themselves out of a cardboard box. When they attempted to, they were regularly met — and usually far outnumbered — by local opposition. Before too long, the revived movement was infiltrated by the police, and members were more likely to murder each other than to target anyone else. It also dropped its anti-Catholic and anti-French edge, making a Quebec wing — with its homophobic and anti-Indigenous emphasis — possible.

Bartley’s section on the KKK’s involvement in the Mercier Bridge blockade, part of the larger Oka Crisis, in 1990, is one of the best in the book: “The Klansmen began distributing anti-Mohawk pamphlets to the predominantly white onlookers, highlighting their presence with placards urging the Quebec government to take a hard line.” Days later, a large group “collected at the north exit from the bridge in the suburb of LaSalle, watching the Mohawks negotiate their way through the police line.” These were Klan members and other angry locals, who “pelted the cars full of fleeing Mohawks” with “volleys of large rocks and jagged pieces of asphalt.” Bartley also includes a detailed chapter on the Klan’s remarkable if dubious plan to invade the small Caribbean island of Dominica, in the early 1980s. It is a fascinating story, but because the plot was financed and run out of the U.S., supported primarily by Americans, and not sanctioned by the intolerant fraternity, it doesn’t shed much light on the Canadian KKK.

Times changed, and robes and hoods were replaced by suits and ties. The Klan became more elusive as the lines between right-wing extremist groups, neo-Nazis, and skinheads became blurred. Whatever limited momentum the renewed KKK had was soon dissipated, and it met the dawn of the twenty-first century largely as an online hate organization adrift in racist cyberspace. Bartley ends his book with the election of Donald Trump, in 2016: “Events in the aftermath of the Trump victory spoke to the enabling nature of the relentless and crude hate flowing north to Canada. The months after Trump’s election and inauguration saw a spike in anti-immigrant, anti-Muslim, anti-Black and homophobic incidents and attacks across the country, many of them referencing the Ku Klux Klan but without real Klan organizations to back them.” Only time will tell if the one-term presidency represents the end of the group’s story here or the beginning of a new chapter.

Did the arrival of the Klan change the nature or direction of Canadian nativism, bigotry, and racism? Is it even a good model through which to examine racism in this country? Among the largest documented acts of Klan violence was the 1926 bombing of St. Mary’s Roman Catholic Church, in Barrie, Ontario. One of the three men arrested was an Irish immigrant and an ex-soldier who claimed his wife had been murdered by Irish Republicans in Belfast. The bombing was his revenge. Even if he was a card-carrying Klan member, was this really the KKK at work or was it part of a larger — and deeper — Canadian story of bigotry stretching back to the Protestant Protective Association and other nineteenth-century nativist organizations?

The Klan appealed to many of the same people and causes and differed primarily in its more open advocacy of violence and intimidation. The regalia and the cross burnings were new, but it was an expression of the same religious animosity, bigotry, and racism that had long been entrenched in Canadian society.