Seen but Not Seen: Influential Canadians and the First Nations from the 1840s to Today

In her preface to Writing the Circle: Native Women of Western Canada, a poetry collection published in 1990, the Métis scholar and poet Emma LaRocque asked, “Here are our voices — who will hear?” The question emphasizes Indigenous women’s determination to tell their own stories, in their own words. But, as LaRocque acknowledged, there are no guarantees such voices, even when spoken, will actually be heard.

The historian Donald B. Smith, an expert on Confederation and nineteenth-century Indigenous histories, makes a similar point in his new book, Seen but Not Seen. From the 1840s until the 1960s, many well-known politicians, artists, scholars, journalists, and clergymen, including Sir John A. Macdonald, Emily Carr, George Monro Grant, and Abbé Lionel Groulx, interacted with Indigenous people in their everyday lives. Some had important, personal relationships with them. Macdonald, for instance, sponsored a young Iroquois man, Thomas Green, in his civil engineering studies at McGill University; his beloved granddaughter Daisy, a frequent visitor to Earnscliffe, had a headmistress of Cree descent.* Upon her death, Carr willed her paints, brushes, and unused canvases to George Clutesi, a young Nuu‑chah‑nulth artist.

But with few exceptions, Smith argues, these white Canadians failed to truly see Indigenous people, much less understand them as they understood themselves. Macdonald referred to them as “savages” who required assimilation for their own good. And Carr, who adamantly opposed residential schools and empathized with those she saw as outsiders, demonstrated no interest at all in the struggles to assert Indigenous title to the land. Smith’s book is about such determined unseeing.

As Smith knows, North American history does not start in 1492. But by the mid-nineteenth century, when his story begins, Europeans had naturalized their presence on the continent, while selectively erasing huge swaths of the past from the public consciousness. 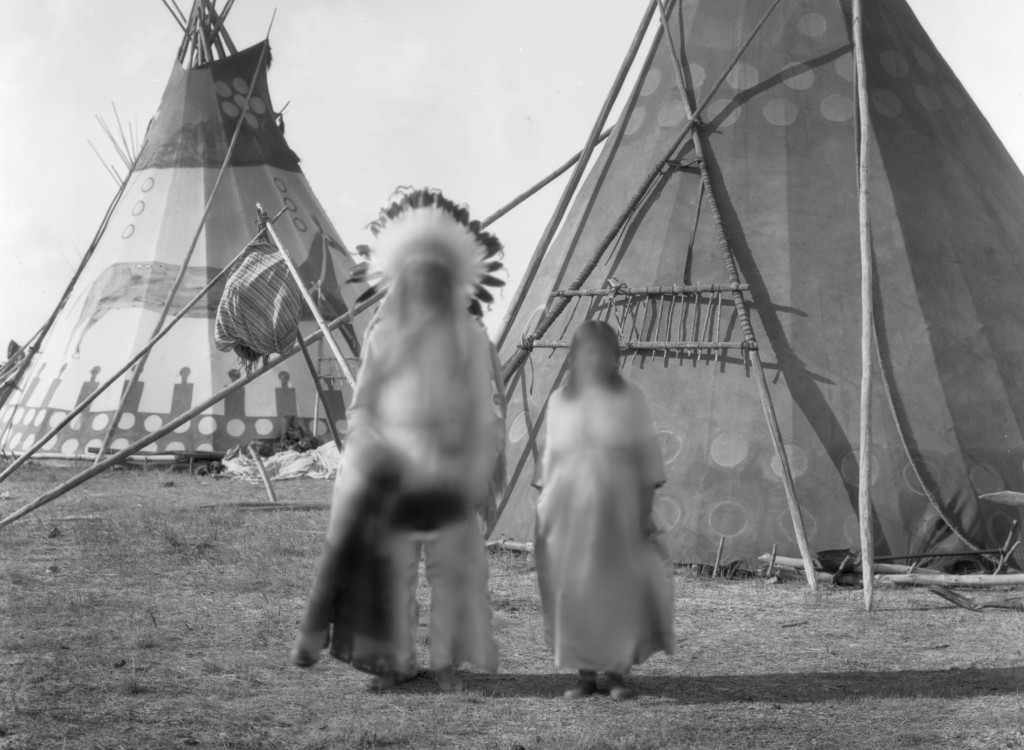 In 1845, young Sandford Fleming, the engineer who would one day invent standard time, described in his journal a prevailing assumption about Indigenous people: “They are dying away every year and it is supposed that their race will soon be extinct.” With few exceptions, such views persisted for decades. Consider how the historian Jacques Rousseau and the educator George Brown explained their inclusion of sixty-five seventeenth-century Indigenous figures in the Dictionary of Canadian Biography, in 1966: “Like fireflies they glimmer for a moment before disappearing again into the dark forest of unrecorded hist­ory.” In romantic tones that invoked the trope of the “vanishing Indian,” Rousseau and Brown saw archival and “fragmentary” curiosities.

Certainly, there was a radically diminished Indigenous presence by the 1850s: just 15,000 people, making up “less than one per cent of the total population of approximately two million” in the Union of the Canadas. But those numbers were the consequence of concerted efforts by politicians, missionaries, legal experts, and educators. Smith provides detailed, deft biographical sketches of some of these people — fifteen major individuals and many minor ones.

John A. Macdonald is, of course, among them. In 1857, at the Assembly of the Canadas, he introduced the Act for the Gradual Civilization of the Indian Tribes. The legislation, which passed with just one dissenting vote, was part of a larger push to establish reserves as “training schools” for adaptation to “modern conditions.” The aim was to enfranchise status Indians and grant them full citizenship rights as private individual landowners, ultimately ending the reserve system and the existence of “Indians” as distinct peoples. “Neither Macdonald nor any other Cabinet member consulted any chiefs or Indian councils prior to the legislative debate,” Smith points out.

Another portrait is of George McDougall, a Methodist minister whose adopted “Indian daughter” died in the 1869–70 smallpox epidemic. McDougall, who fought “paganism” his entire life, supported the removal of the Manitou Stone, an intact meteorite long incorporated into Blackfoot and Cree spiritual ceremonies in northern Alberta. Eventually, in an all too familiar appropriation of religious and artistic objects, the stone ended up at the Methodist Victoria College, in Cobourg, Ontario, where it could edify white audiences. (Today it is displayed at the Royal Alberta Museum, in Edmonton.)

A pious judge, John Alexander Boyd kept an “Indian notebook” with place names and histories, which he gathered from scholarly journals. He spent his summers in a series of cottages on Georgian Bay, in Ontario, next to the Wasauksing First Nation. Despite his amateur interests in ethnography, Boyd avoided any meaningful contact with his Wasauksing neighbours, as did many cottagers. And in a judicial opinion on June 10, 1885, he concluded that as “heathens and barbarians,” Indigenous peoples had no proprietary rights to their own lands — a judgment that helped affirm settler occupation like his.

A few decades later, in 1941, the McGill professor Stephen Leacock wrote Canada: The Foundations of Its Future, a popular book commissioned by the Seagram magnate Sam Bronfman. Leacock’s account began with “The Empty Continent,” a chapter that dismissed an Indigenous past: “The Indians were too few to count. Their use of the resources of the continent was scarcely more than that by crows and wolves, their development of it nothing.” (Tellingly, the Seagram representatives who reviewed an early draft objected to “swipes that Leacock took at immigrants, French Canadians, Roman Catholic priests, Americans, and the Irish” and asked him to revise those racially charged statements, which he did begrudgingly.)

Before the 1960s, only a handful of Canadians truly saw the realities and struggles of Indigenous peoples and understood them as contemporary human beings. A nineteenth-century Baptist minister, Silas Rand, became close to the Mi’kmaq during his (largely failed) attempts to convert them from Roman Catholicism, for instance. In an 1854 speech, Rand “shouted from the platform” an unusually lucid assessment of the continent-wide injustice:

Shame on us! We invade the territory of men made like ourselves, and fashioned in the image of God . . . we treat them as though they had no rights. We seize upon their country. We rob them of their lands. We drive them from their homes. We plunder them of all they hold dear and sacred; we deceive and defraud them — we violate the most solemn treaties made with them; we impoverish, degrade, despise and abuse them.

A dedicated few also pointed out the wrongs of colonial settlement and worked side by side with Indigenous communities as they struggled to maintain their cultures and relationships with their lands. In what became British Columbia, for instance, the ethnographer James Teit married a Nlaka’pamux woman, Lucy Antko, in 1892, so deepening a lifelong commitment to First Nations advocacy. In what can be read only as a compliment to Teit’s tireless efforts “as a translator, secretary, and lobbyist,” Smith notes that by 1913, “the Department of Indian Affairs had gathered a thick dossier on James Teit’s activities on behalf of Indigenous rights.”

In the 1930s and 1940s, the Coleridge scholar Kathleen Coburn drew on long-standing friend­ships with a Mohawk writer, Ethel Brant Monture, and the Tabobandungs, an Anishinaabe family who lived close to her Georgian Bay cottage, to learn about and later champion Indigenous voices and causes. Particularly with her reviews in The Canadian Forum, Coburn critiqued unfounded prejudices that were far too common. Around that same time, in 1944, Maisie Hurley, born in Wales, became the first woman admitted to the Native Brotherhood of British Columbia, as a lifetime associate. Two years later, she established the Native Voice, an advocacy newspaper with an otherwise all-Indigenous staff, including the editors Jack Benyon, a veteran of the First World War, and Ruth Smith, who graduated from the Coqualeetza Residential School. By the end of the decade, the paper had 3,000 subscribers.

The Marxist scholar Stanley Ryerson was another outlier. He adamantly refused to contribute to the erasure of Indigenous annals. In The Founding of Canada: Beginnings to 1815, which went through four editions in the 1960s and sold 12,000 copies, Ryerson observed, “The written record of our country’s history covers less than five centuries. Before that there were more than two hundred centuries of human habitation, struggle and achievements.” This record, he argued, was as meaningful as anything that came after. Ryerson would later be credited with producing one of the first non-Indigenous histories of Canada “to reject the founding myth of Cabot, Cartier, and Champlain.”

Even if the typical Canadian saw Indigenous people without seeing them as contemporaries or equals, Smith does not consider this attitude a personal failing. Rather, as a good historian might be expected to do, he insists that all individuals, from the powerful to those largely forgotten, must be understood within the context of their time. In his preface, Smith recalls his own youthful failure to see:

I was born in Toronto in 1946 and grew up in Oakville, located halfway between the cities of Hamilton and Toronto. During my boyhood I ­cannot recall a single reference in public or high school to the Mississauga First Nations, Ojibwe-speakers who call themselves, “Anishinabe” (meaning in English, “human being”), or in its plural form, “Anishinabeg.” I do not remember meeting anyone in Oakville who self-identified as “Indian.” Indigenous people did not enter into the conversation. First Nations were not mentioned in the newspapers.

Smith’s awakening began in the 1960s, during the civil rights and decolonization movements, when major figures such as Harold Cardinal emerged. The Cree political leader, lawyer, and writer “represented a whole new generation of young Indigenous people who spoke English and/or French well, who had travelled and read widely, and who were prepared to speak out on issues of concern.”

Over the years, Smith observes, “the values, attitudes, and assumptions of many non-Indigenous Canadians towards the First Nations have undergone radical and extraordinary change.” Several religious institutions, though not the Catholic Church, have offered apologies for their roles in the residential school system. Educational institutions, including universities, have been transformed with more Indigenous faculty and students (even if they are still underrepresented). Scholars like Olive Dickason and John Borrows have corrected old misperceptions. Creative writers like Maria Campbell, Tomson Highway, and Liz Howard have entered the broader imagination, and, in the process, have transformed popular understandings of Indigenous peoples.

Racism and ignorance still exist, of course. There are narratives left to unravel, as Gina Starblanket and Dallas Hunt described in Storying Violence, their book from 2020. “Be aware of your histories, of your stories,” they urged non-Indigenous residents of Canada, “and then figure out what it means to take responsibility for those histories, so that you might interrupt enduring cycles of settler colonial violence.”

To see Indigenous peoples, in other words, we must also see ourselves. With this well-written, engrossing, and often sobering book, Smith helps us do some of that work, with all the responsibilities it implies.

* Correction: The printed version of this piece said Macdonald’s cherished granddaughter was Cree herself, an unfortunate error.