On a July morning in 2015, a raccoon died at the corner of Yonge and Church in Toronto. That evening, Conrad’s passing was marked by a candlelight vigil, his furry body surrounded by framed photographs, flowers, and notes of heartfelt remembrance. One city councillor proposed leaving compost bins open in Conrad’s honour, and NPR would later declare Toronto the “­raccoon capital of the world.”

This is just one of many stories that Daniel Heath Justice, holder of a Canada Research Chair at the University of British Columbia, draws upon in his deep dive into the biological, taxonomical, historical, and cultural significance of Procyon lotor. His latest book, Raccoon, joins over a hundred entries in Reaktion’s Animal series (which also includes Justice’s previous contribution, Badger). This is more than just a thorough primer on the nocturnal mammal whose roots can be traced back in the fossil record some thirty million years; it is a nuanced interrogation of the many behaviours, habitats, and characteristics the little guy shares with us.

In Swedish, the common northern raccoon is known as tvättbjörn, or “washer bear,” because of its proclivity for dunking its food in water. While some have hailed this behaviour as a sign of daintiness or sophistication, the truth is far more interesting. “Yes,” Justice writes, “raccoons often wet and digitally manipulate food and other objects,” but they’re not doing that for cleaning purposes. Rather, they’re reading the objects with the sensitive palms of their hands. 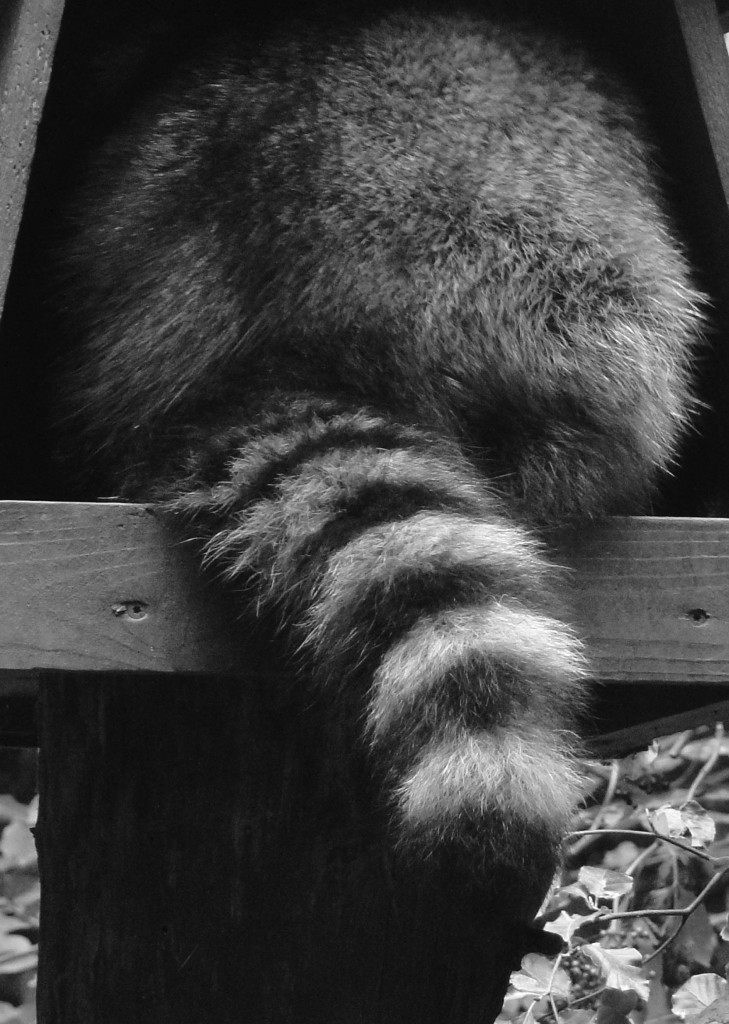 Tales of the raccoon.
Image by Richard White; Flickr

Accessing the world hands first, raccoons are neophiliacs: they actively seek out experiences with a “Can I touch it? Can I eat it?” mentality much like our own. Where your average dog might approach an unusually shaped garbage can with wary apprehension, a raccoon sees only challenge and opportunity, a Rubik’s Cube with an intoxicatingly rotten centre. This point was driven home in 2016 by the overnight failure of Toronto’s $31-million “raccoon-proof” organic waste bins: for the city’s raccoons, the juice was simply worth the squeeze. But here too, Justice does away with a popular misconception about the curbside salad bars: “It was brute strength, luck and repetition of success, not clever problem-solving or dextrous use of their digits, that enabled food-motivated raccoons, especially nursing mothers, to pop the lids” that were, supposedly, guaranteed to thwart access.

“Behavioural adaptability, unique physiology and insatiable curiosity” have allowed the raccoon to become one of the more prospering mammals. Like humans, they are generalists: gregarious, opportunistic, living and dying by their wits. Perhaps it is because of these similarities with us that we find the raccoon so frequently represented in art and folklore as our eternal younger sibling, the coy trickster. Many cultures begrudgingly celebrate — even envy — their fearless defiance and mischievous tendencies; Justice points to raccoons in Mississippian mythology as “category-defying, rule-breaking and boundary-breaching beings” who flourish on the borderline between wild and cultivated.

Most of the traits that have allowed humans to succeed as a species — flexibility, creativity, “capacity for sociality and inclinations to violent territoriality”— are shared by the raccoon. Indeed, our own impact on the planet is tilting the scales in their favour, with increasing global temperature and precipitation levels leading to 61 percent of the world now being a suitable habitat. “In spite of wildlife officials’ best efforts to stop them,” Justice writes, “raccoons have been sighted in most European countries.” Whether introduced intentionally or otherwise, “masks” (one of several collective nouns, along with “nurseries” and “gazes”) are flourishing in Germany, Japan, Spain, and Russia. Their global expansion (and concomitant economic disruption) comes less than a century after they experienced catastrophic population decline, having been hunted for their Davy Crockett fur and killed by deforestation.

As Justice unpacks the cultural significance of the animal, he explores the racial slur drawn from its name: “‘Raccoon’ itself is already a clipped, Anglicized form of the . . . Powhatan arakun; ‘coon,’ then, is yet another natural short form.” When the raccoon tropes of Indigenous myth — schemer, dreamer, Promethean bearer of fire — were first absorbed by European settlers, they found purchase with “shrewd and independent backwoods or frontier whites, typically men, whose slightly antisocial cleverness made them more objects of admiration and good-natured fun than of scorn.” Before long, however, a different kind of association took root; as the Ku Klux Klan terrorized communities during the Jim Crow era, “Klansmen found a new euphemism to veil their true intent from outsiders while simultaneously signalling their purpose to sympathetic whites: ‘coon hunts.’ ”

Such associations come full circle in modern use of “hackneyed outlaw tropes of raccoons as thieves, robbers, trespassers and vandals.” Justice draws a logical parallel between words that denounce the thriving urban raccoon and descriptions of marginalized, racialized populations: “The readily employed language of invasion, war, survival, infestation and threat is part of a larger and troubling pattern, with ugly echoes of anti-immigrant racism and nativism in the representations of ‘invasive’ species.” Still, Justice concedes, perhaps there is something of an existential threat at play. “They put the lie to our sense of hominid omnipotence, and we hate and fear them for it, even when we accord some individuals of their kind a measure of tolerance.”

Time and again, raccoons crop up in literature and art as “part of a larger meditation on human mortality and the passing of time.” Justice points to a particularly heart-rending run in Bill Watterson’s Calvin and Hobbes, where the protagonists stumble upon an injured kit in the woods and try to nurse him back to health in a shoebox. When the young raccoon dies, Calvin tells his father, “I’m crying because out there he’s gone. But he’s not gone inside me.”

Justice leaves little doubt that we see ourselves in raccoons, flattering ourselves as kin to the “seasoned traveller in all worlds” (cue the dapper Porter Airlines mascot). We hold these wily creatures close to our hearts, even while shaking our fists at their evening cavorting through our Dumpsters. We love them and hate them for their resilience, their ingenuity, their pluck. We mark their passing with candles and letters on the side of busy streets — gestures that even a post-ironic world can’t strip of their significance.