The Woman in Valencia

A woman, with all we consider beautiful decaying, her blond hair faded, her frame bone-thin and her pale skin as waxy as death, quietly drops herself from the fourth-floor terrace of a four-star hotel near the Mediterranean coast. The last person to speak to her, Claire Halde, watches, frozen, as she clutches the falling stranger’s purse — a purse that whispers to her, in the universal language of women, that its owner no longer has need of such earthly trappings. A few feet away, Claire’s husband and children splash away in the pool, happily unaware. Time slows to a crawl. There is a trail of blood along the wooden deck from the woman’s cut wrist. She lets go. “All she wants is a few feet of freedom before hitting the concrete, like a breakaway in a cycling race, that thrilling feeling of slicing through the air.” From the boulevard below, there are screams.

Annie Perreault’s debut, The Woman in Valencia, translated by Ann Marie Boulanger, never strays far from this moment. Over and over again, the woman approaches Claire and speaks to her in a hoarse, garbled voice that insists, “No, no, no, no! No help, just the bag.” Over and over, Claire agonizes over her inertia, spiralling further into her guilt. Someone else, a kinder soul, would have known the right combination of hand on arm, consolation, and hope. Instead, she “will carry the secret around like a vicious scar.” It will become “a crack in the heretofore smooth finish, a defect, a burden, a sense of self-loathing, the biggest failure of her life.” From one desperate and damaged person to another. Claire can’t bring herself to get rid of the purse.

This moment of ours is heavy with feelings of helplessness and death — despite the vaccines and despite the summer sun (as Claire Halde knows, bad things can happen on bright afternoons). It may not seem the best of times to read a novel such as this, but it is not the worst of times either. Besides, when were stories ever about forgetting one’s troubles?

The Woman in Valencia is a precise but fractured study in grief and resignation, restlessness and the need for escape. The narrative unfolds across three time frames, over as many decades, and touches upon three individuals, each of whom is trying to find her own sense of peace. 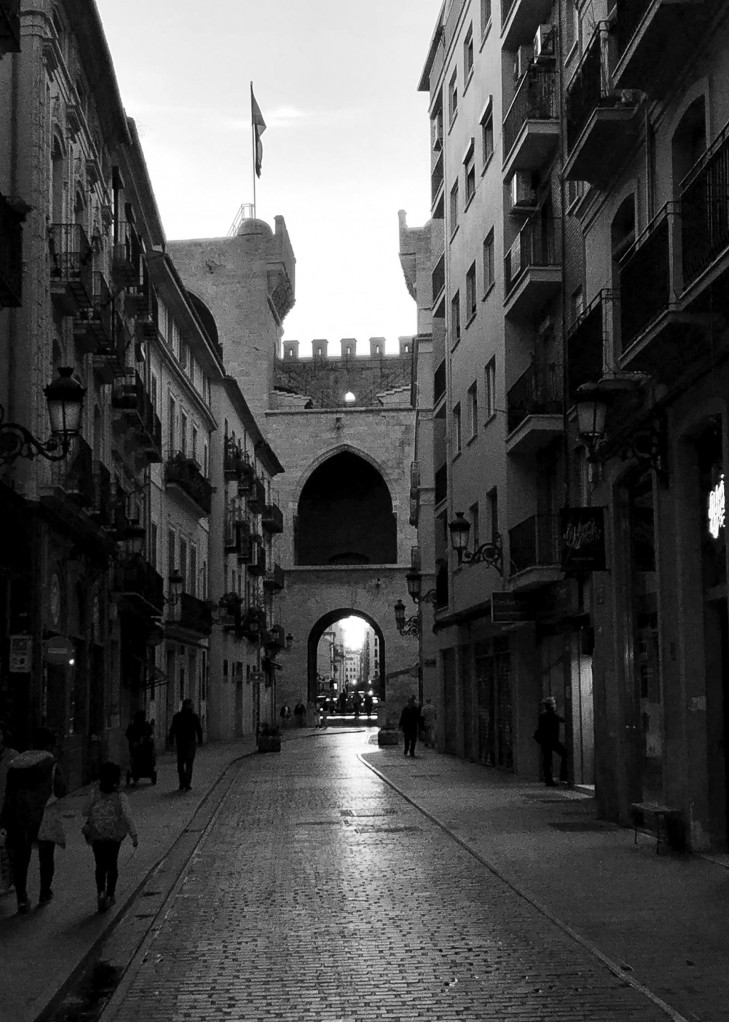 Passing through those ancient streets.
Image by Kyle Wyatt

In the first part, Claire picks apart the orderly, elegant construct of her life following that day on the hotel terrace, in August 2009. The nameless stranger, a “fleeting ghost,” haunts her. The finality of the act, with its release and its repulsion, provides the crack that shatters Claire’s existence: “That numbness that pervades your whole body and clouds your vision, when your skin feels like it’s weighed down by a layer of clay, when staring into the soft glow of a ­lightbulb sends you into a trance, and you’re suddenly convinced of the need to take stock of your entire life, right there, in the middle of the night.”

Even as Claire folds in on herself and her obsession, the prose is light and capacious. Within it, the tension of her alienation rests on a knife’s edge. Each action triggers a memory, a sensation, a shift in feeling, or a blur in time — as when Claire dumps her children’s dead fish down the toilet “with the same coldness with which she’ll one day say, in a single breath, Jean, I don’t love you anymore.” (Her husband is doomed by his inability to see that all is connected, but then none of the men in the novel are more than one-dimensional sounding boards.) For years, it seems impossible for Claire to simply cast aside her pain and move on — a fate worse than if she was to slip herself over one of the balconies or bridges that she now finds herself considering. She thinks back to the woman’s twitching body on the scorching sidewalk, a piece of her heel bone “the size of a not-altogether ripe apricot,” broken off and left on the road. For months afterwards, when Claire goes for a run, she experiences a dull ache in her foot.

Running is the thing that Claire does to “feel alive,” and this — both exercising and clinging to life — is what propels the parallel stories of the book’s second section. In one, Claire’s daughter, Laure, now grown, competes in the 2025 Valencia Marathon. Interwoven with Laure’s race are scenes of her mother also running — away from their family home in Montreal and back to the Spanish city, to that same hotel, where she lost a part of herself. Claire never returns from this trip. She disappears without a trace. All Laure has left is a shoebox of her mother’s old journals —“years of handwritten confidences, line after line of her life story recorded in a rainbow of inks and leads, a stream of cursive writing, frenetic and illegible in places.” Then step by step, kilometre by kilometre, she passes through the ancient streets that her mother also passed through a decade earlier.

Perhaps a person can never truly know another, especially a mother, who sacrifices a portion of herself to perform that role. Pain is what translates. Even as a child, Laure sensed her mother “slipping away from us bit by bit, I felt her melancholy penetrating my tender little girl’s skin.” Children are porous, though. As Laure runs — farther than she has ever run before — Claire’s songs pump through her ears, their melodies prescient and sad, and oddly slow. Claire’s story keeps pace just behind Laure’s, as she dyes her hair blond in her last few days in Spain, assumes a new name, swaps her usual “classic grey” for a strapless red dress, buys a train ticket to Seville, empties her bank account, and surrenders herself to an undecided future. She becomes “a woman on the run maybe, but not running scared.”

Disconnection is the void that Claire embraces. The life she leaves behind stands still, but she must move. The cost of staying, of making love to Laure’s father in the same routine way that she puts out the recycling, is too high. Toward the end of her own run, Laure reaches a kind of understanding about her mother. “Come, Mama,” she says, “take my arm, pull me into your slipstream.” They surge forward together. Do not be deceived, though: there are no tidy endings in the book’s final chapters.

Bewitching sentences tend to flow out of Quebec, and Perrault’s novel is full of them. Because of how the narrative progresses, the characters cannot know where they are going or who they will be when they get there. Such ambiguity is alluring. The characters run on beyond the last few pages. Who can say what will come next?