The Machinery of Government: Public Administration and the Liberal State

The philosopher Joseph Heath ended his 2014 bestseller, Enlightenment 2.0, with a damp squib. That book explored the limitations of human rationality — both individual and collective — and presented a depressing portrait of a decline of reason in contemporary society, with its politics “enslaved by speed” and vulnerable to demagoguery. But even Heath seemed to recognize that his Slow Politics Manifesto —“a firm defense of quiet, rational deliberation is the only way to oppose the universal folly of Fast Life”— was pretty thin gruel as a recipe for what to do.

With The Machinery of Government, Heath offers a proposal that is both meatier and more optimistic. The book, which deservedly won the 2020 Donner Prize, is a political philosopher’s take on the appropriate place of public administration in liberal democracies. Its argumentation is dense and academic.

In contrast with his earlier book, which obsessed over the craziness of American politics, Heath includes almost nothing on the current political malaise — no Trump, no Twitter, no Facebook. His ambition here is twofold: to establish the theoretical foundations for why the executive — the civil service and other non-elected public agencies — should legitimately have wide discretion in the modern liberal state, and to set out what should be its guiding principles. Heath presents a well-functioning civil service as a redoubt of rationality within liberal democratic regimes. 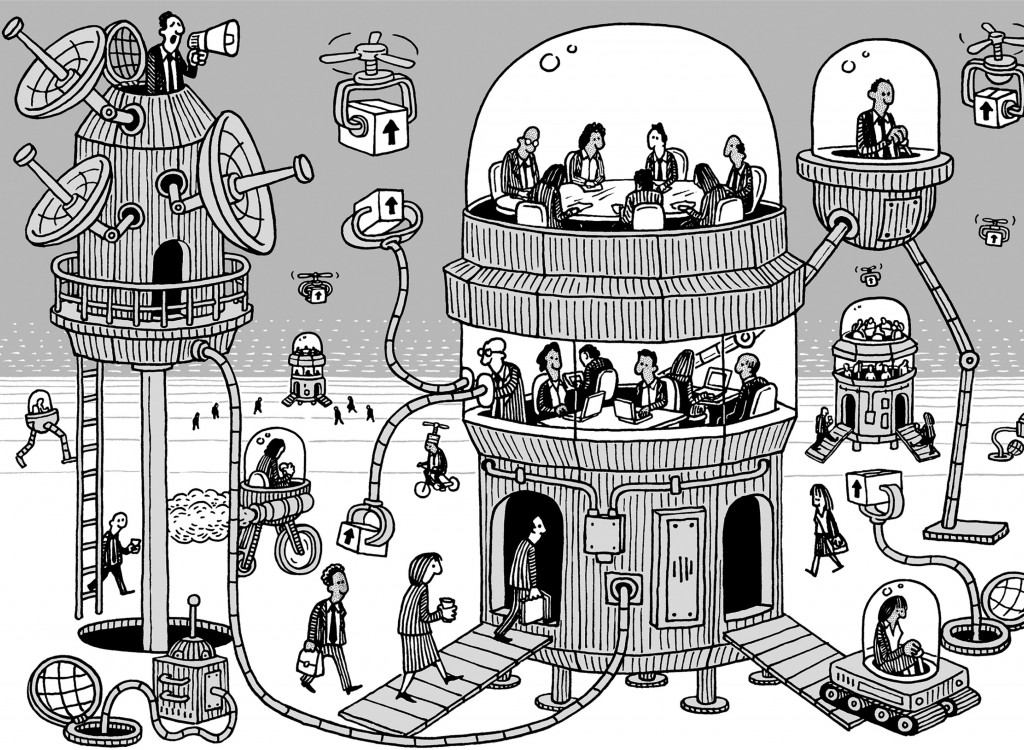 Putting the size and complexity of the executive branch to work.
Image by Tom Chitty

Heath traces the history of liberalism from its earliest roots through the rise and decline of classic liberalism to the rise of modern liberalism, which has been central to the founding of the liberal democratic state. He considers the state’s embedded core principles to be efficiency, equality, and liberty: “The very broad center of contemporary politics, and the major axis of disagreement in political ideology, concerns the appropriate weighting of the three major principles that characterize modern liberalism.”

The sheer size and complexity of the executive branch of government mean most of its activities escape direct control by politicians. The hierarchical accountability of officials to ministers is necessarily limited, and their direct accountability to the public is even more so. Accountable or not, civil servants have wide discretion in administering laws and programs and in advising ministers. But Heath argues that they can exercise that discretion legitimately, provided they operate with respect for the core values of liberal democracy. To do so, they need a strong independent conception of their professional obligations and an ethic of neutrality. Political ideologies of the left, right, and centre differ on the weight they ascribe to efficiency, equality, and liberty, so civil servants themselves should remain as agnostic as possible.

Agnostic but, Heath suggests, not without guiding principles of their own. His analytical frame draws heavily on welfare economics, and he sees the basic role of the state as resolving “collective action problems,” which typically arise when conventional markets fail to produce reasonably efficient outcomes. Efficiency is fundamental. Heath maintains that “the growth of the welfare state over the course of the 20th century was largely the consequence of a relentless application of the logic of Pareto efficiency in the context of a market economy.” (Named after an Italian economist and philosopher, the Pareto principle considers any change from one social state to another to be an improvement, as long as it makes at least one person better off and no one worse off.) Heath also argues that cost-benefit analysis represents an extension of the logic of efficiency, so it is a legitimate “hammer in the toolbox of ‘technocratic’ decision-making.”

As a practical matter, Pareto efficiency is an extremely constraining principle when applied to government, where most choices involve winners and losers. So Heath’s emphasis on the various forms of “Pareto optimality” will not sit well with most practitioners. He is more persuasive in arguing that the pursuit of efficiency provides “considerable explanatory power” for state actions: interventions in the control of natural monopolies; the regulation of such negative externalities as pollution; the provision of public goods like defence and many forms of insurance; and the delivery of a social safety net, including health care, old-age pensions, unemployment insurance, and welfare. At the same time, Heath admits that such programs are usually financed in ways that are implicitly redistributive, which has “led many political philosophers to conclude, erroneously, that the fundamental rationale for state involvement in these sectors was to effect a redistribution, or to distribute these goods in accordance with nonmarket principles.”

A core concern for Heath is to establish the bounds of legitimate action and advice by civil servants. It is both necessary and appropriate for them to have discretion in applying laws and implementing programs, because legislation cannot be detailed enough to constrain executive discretion and because the courts lack the competence to provide effective oversight in many cases.

But what about equality? While accepting it as a core principle of liberal democracy, Heath gives it little examination. At a minimum, it’s part of the non-discriminatory obligations of civil servants to treat all citizens equally. But it’s also a major point of contention politically, and here Heath seems uncomfortable with civil servants providing advice and making decisions based — even in part — on equality. He thinks they should be neutral as to the respective weights given to efficiency, equality, and liberty, and he appears to think they have little to contribute on the subject, which he sees as a more ideological issue for politicians. But equality is not just an ideological issue — it’s the object of much evidence-based study and analysis.

Whatever it might mean for efficiency, rising inequality is seen by many as a significant market failure. Civil servants who offer advice on budgets, health, and social welfare — to take just three obvious domains — will appropriately consider equality in the administration of programs. The lack of a considered position on this pillar of liberalism is the most glaring deficiency in Heath’s intellectual approach.

“The size and complexity of the executive branch mean most of its activities escape direct control.”

But he does have a position on the third principle, namely liberty. His analysis draws heavily on John Stuart Mill’s defence of liberty and on the principle of limited state power. On this basis, Heath sets out why state paternalism, whether in laws or in discretionary acts, must meet a high threshold of justification. While he believes in individuals retaining free choice, he draws on psychology to argue that modern life is making it more difficult to be rational about one’s own interests. The new complexity can justify the state’s efforts to influence people to make choices in their own interests — whether through incentives or with subtle “nudges” in the architecture of options. This must be done with considerable deference to individual choice, though. (The coronavirus, just one recent example, has highlighted numerous issues regarding the state’s intervention in individual choices about testing, vaccinations, and masks.)

Heath brings a political theorist’s perspective to public administration — a perspective that is both original and insightful. However, his emphasis on efficiency and his belief that the government’s primary role is to address market failures are constraining. His view contrasts sharply with Mark Carney’s in Value(s), where the former governor of the Bank of Canada, who is acutely aware of the failures of the market, argues for something much more than limited corrections. This is not to deny the importance of efficiency — Heath is persuasive on that — but governments pursue many objectives that go beyond responding to market failure. Heath’s argument that it is legitimate for public administrators to have significant discretion and that the executive is being relatively disciplined in its approach to analysis and action is welcome, but his sense of the boundaries on appropriate advice or action by civil servants is also somewhat unrealistic.

Heath’s next book will be on climate change, but already he suggests that in deciding the right price for carbon, cost-benefit analysis is “the only game in town.” That approach would be immeasurably complex for a phenomenon with such a global reach, but we’ll see whether that is where the professor takes us next.