As is often the case, Canada is late to the cultural party for one of its best artists. It was not until 1992 that Norman Jewison — ­easily our top film director, with artistic and box-office hits that stretch back to the 1960s — was made a companion of the Order of Canada. This was long after his work had earned dozens of international accolades, including three Oscar nominations for best director. Jewison’s film career spanned the entire second half of the twentieth century, and not once did he seal himself within the Hollywood bubble. He expressed his passion for social justice and human rights most palpably when he championed Robert F. Kennedy’s run for president and marched in Martin Luther King’s funeral procession. Golda Meir, the so‑called Iron Lady of Israeli politics, praised him for his idealism.

I once had a phone conversation with Jewison, when I was working on my second biography of the great William Hutt, who starred in the director’s final film, The Statement. As we spoke, I got the distinct impression that Jewison was a decent, humane, and tactful craftsperson. It was obvious why such a diverse group of eminences — including Cher, Faye Dunaway, Ross Hunter, Olympia Dukakis, Denzel Washington, Atom Egoyan, and Sidney Poitier — have paid him tributes over the years. So it is a pity that it took so long to see a biography of this ninety-five-year-old who has given audiences so many indelible film memories. And it is a pity that this biography, Norman Jewison: A Director’s Life, though mercifully free of academic heavy breathing, falls short of being either an authoritative summary of a glorious career or a first-rate portrait of a true humanist. In some ways, it is distressingly half-assed, having a paltry black and white photo section and a jacket cover, also in black and white, where Jewison appears in a two‑shot, his head only slightly in front of the face of Steve McQueen, a notoriously difficult star who insisted on having the “juice” or control of any film he touched.

Canada’s best film critic, Jay Scott, was working on a biography of Jewison before he died in 1993, but Ira Wells, an administrator and literature professor at the University of Toronto’s Victoria College, is no slouch. While he has an easy-to-read style, he sometimes wastes space on studio financing, marketing, and trivia, and he needlessly pumps up the value of some of Jewison’s more mediocre films and outright duds. On occasion, Wells even discourses at length on prospective movies, especially an adaptation of William Styron’s The Confessions of Nat Turner, that were never made. (I was grateful, however, that the author includes a letter by a Romanian daredevil who begged to be cast in Rollerball : “I do barehead crash into Brickwall, you provide the motorsickle.”) 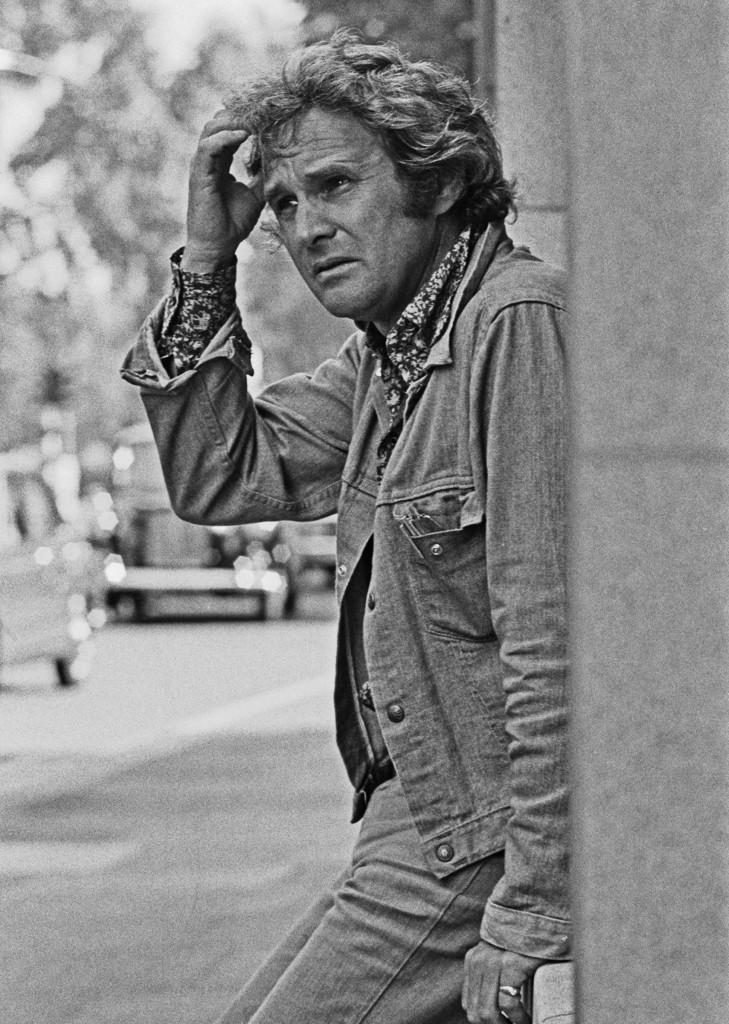 In pursuit of his craft.
Image by Evening Standard, 1973; Hulton Archive; Getty Images

Wells’s viewfinder contracts when he focuses on Jewison’s family life, especially when it comes to the director’s first marriage, which was put under immense strain by his propensity to move around (from Canada to the U.S., then to England and back to Canada). Wells shows that Jewison never lost his attachment to this ­country or his yearning for a quiet rural refuge, away from his homes in large cities. But there are gaps in the narrative, including a huge one when the story jumps sixteen years from his final film to a coda with Jewison in his nineties.

Nevertheless, the book is far from negligible. It portrays Jewison as a man of boundless energy, enormous charm, subtle suasion, high idealism, and shrewd (if sometimes ruthless) action in the pursuit and reinvigoration of his craft. It also raises interesting overarching questions about his career, without necessarily answering them decisively. One such question: How does a film insider stay outside the general craziness that is part of getting a movie project under way and carried over the finish line? According to Wells, each of Jewison’s projects began with the “dance,” which is to say the pitch — that moment when he tried to sell his idea to those with the money. Unlike Francis Coppola or Steven Spielberg, both terrific salespeople, Jewison was more of a brash, outspoken black sheep, part of the first wave of directors who pried creative control away from the big studios. He was also a Canadian with candidly devastating views of American society.

Born in a rough, working-class Toronto neighbourhood in 1926, when widespread anti-Semitism and racism contradicted the popular notion of Toronto the Good, Jewison didn’t have the most auspicious of beginnings as a film director. His journey began at Universal Pictures at the end of the studio system’s golden age. His first project was a bit of fluff called 40 Pounds of Trouble, a second remake of the 1934 Shirley Temple comedy Little Miss Marker, starring Tony Curtis as a womanizing casino manager suddenly responsible for a five-year-old girl. The only part of the screenplay that excited Jewison was a single paragraph that mentioned Disneyland and an ensuing chase, which brought to mind a Mack Sennett escapade. Jewison brought to Hollywood valuable television experience at the CBC, whose executives were afraid of anything smacking of showmanship. And by the early ’60s, he was the highest-paid TV director in North America, having worked with, among others, Harry Belafonte and Judy Garland. Even still, he forgot to call “Action!” when he directed the first scene of his first feature on April 19, 1962.

“A movie should never be made unless it has a raison d’être” became Jewison’s motto, though it was hard to argue that 40 Pounds of Trouble and his next three films —The Thrill of It All (1963), Send Me No Flowers (1964), and The Art of Love (1965) — were made for worthy reasons. No wonder he grew afraid of “doing nothing but slick, innocuous, we’re-off-to-the-seashore, happy-holiday comedies.” The Cincinnati Kid was Jewison’s breakout; the 1965 picture’s muted use of colour repudiated “the bubblegum palette” of his Doris Day films.

“Jewison’s name seems to be vanishing from critical conversation.”

By the late ’60s, with the release of Easy Rider and Bonnie and Clyde and the emergence of such directors as John Frankenheimer, George Roy Hill, and Arthur Hiller, Hollywood was changing for the grittier and the better. Jewison also moved into a higher gear, finding his niche with The Russians Are Coming the Russians Are Coming (1966), In the Heat of the Night (1967), and Gaily, Gaily (1969). He followed these with such hits as Fiddler on the Roof (1971), Jesus Christ Superstar (1973), A Soldier’s Story (1984), Moonstruck (1987), and The Hurricane (1999). He was also involved, somewhat controversially, in the 1992 adaptation of The Autobiography of Malcolm X. He never sold out to advertisers, directed a sequel or Marvel movie, or depended on expensive special effects or gimmicks in the manner of George Lucas or Peter Jackson.

Yet, as Wells notes, Jewison’s name seems to be vanishing from critical conversation and is absent from the four-volume Wiley-Blackwell History of American Film, which is not all that surprising, given the general American ignorance of Canadian cultural icons. But, truth be told, the director was often given short shrift by Toronto critics too, particularly Urjo Kareda, who continually panned him for the wrong reasons.

Jewison was sometimes compared to Stanley Kramer because his pictures explored controversial social and political issues, though Jewison had far more versatility and art. Realizing the risks of weighing movies down with heavy messages, he insisted, “You can’t bore people with polemics, because that’s propaganda, and I don’t believe in that.” Yet some of his work became the target of misguided denunciation. His involvement with Malcolm X, featuring Denzel Washington’s finest performance, raised the ire of the Black community (Spike Lee, in particular). An even more vociferous protest — led by Stokely Carmichael, LeRoi Jones, and H. Rap Brown — was mounted against the proposed adaptation of The Confessions of Nat Turner. That effectively ended Jewison’s fervent hope of tapping into a disturbing part of the American psyche. Jesus Christ Superstar, which Jewison envisaged as a rock musical about the spiritual leader of an underground movement, was flayed in radical Jewish circles for being “full of arrogant contempt for Jesus” and for representing Judas as “a victim of Jewish perfidy.” That the director was hardly an enemy of the Jews or Israel couldn’t shield him from vile partisan attacks.

Often crystal clear when explaining Jewison’s embattled idealism, Wells fails to make a coherent synthesis of the director’s visual styles, perhaps because the styles were so perfectly matched to the material. Their mutability is a display of adaptability and reinvention, as evidenced by the sophisticated urban look of The Thomas Crown Affair (1968); the skillful blend of soulful theatricality and naturalism in Fiddler on the Roof, which the American critic Pauline Kael called “the most powerful movie musical ever made”; the giddy “rose-tinted black comedy” of Moonstruck; and the clever use of fog in A Soldier’s Story, which, as Jay Scott pointed out, obscures sharp colours and softens rigid definitions, while serving “as a metaphor for the complicated, stormy reality of relationships between the races in the United States.” Sure, Jewison gained enormously from having the collaboration of superb screenwriters, cinematographers, production designers, and actors, but he was the one with enough unchallenged “juice” to select his collaborators.

Years ago, when asked how the world would remember Jewison, Kael said, “As a man who made some lively movies. That’s a pretty good way to remember somebody.” Well, yes and no. Her mild condescension is too readily supported by Wells, whose own perspective in this biography doesn’t urge a reader to go any further. Ultimately, Norman Jewison: A Director’s Life is a compromise between high-wire daring and middlebrow popularity.