Caleb Wyatt is a middle-aged painter and recovering alcoholic looking for a break. His dad, Jimmi, is the millionaire creator of the world-famous comic strip Sonny Side Up, about an endearing father-son relationship. In truth, Jimmi is a narcissistic, money-obsessed jerk who cheats on his wife and resents Caleb’s existence; nevertheless, he dreams of his son taking over the strip one day. Joe Ollmann’s Fictional Father is a wild tale, one in which the hero tries to overcome addiction, career failure, and generational trauma with the help of his mother, his boyfriend, and various Sonny Side Up sycophants.

This is a book by a visual artist about a failed visual artist, who lives in the shadow of a successful one. But in many ways it is also an essay on the significance of comics (Ollmann literally redraws classic examples throughout to make various claims about the art form) and how they can engender empathy even for bad people. And while Fictional Father is quite beautiful — rich with expressive and piercing art, all of it serving up a family tragedy that is equally funny and sentimental — Ollmann does not always push his aesthetic as far he can.

Ollmann’s true talent is drawing and painting faces that demand attention. Either they take up the majority of the real estate in each panel or they sit at the focal point of the composition. They’re charming, magnetic, and menacing when required. The book’s heavy themes play out mostly via intense conversations, and Ollmann’s command of pen and ink gives the faces a lived texture, while his gentle colouring makes them come alive. Consider Jimmi: In rare moments of generosity, he’s essentially identical to Caleb physically — think a Gen‑X John Waters with a gut and modest attire. In most instances, though, Jimmi’s moustached face exposes his inner character: bald patches in place of a silver coif, steam and froth exploding from his various orifices, and wrinkles and redness from drinking, smoking, and rage. 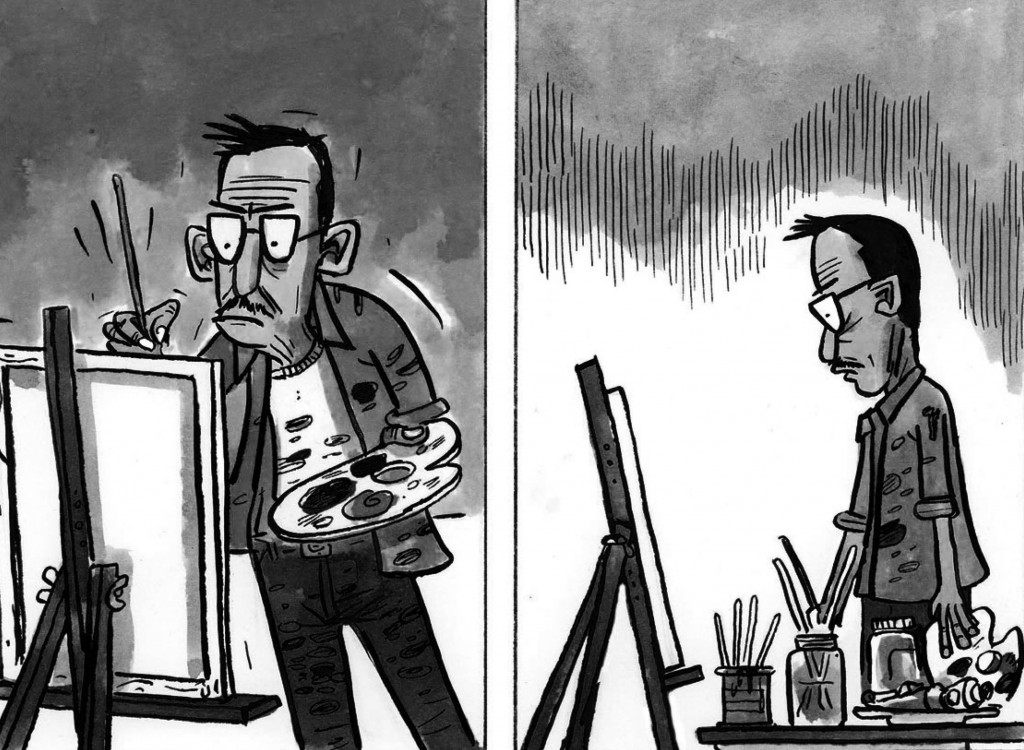 Something of an essay on the significance of comics.
Image by Courtesy of Drawn & Quarterly

In his classic book, Understanding Comics: The Invisible Art, the cartoonist and theorist Scott McCloud posited that by stripping an illustrated face down “to its essential ‘meaning,’ an artist can amplify that meaning in a way that realistic art can’t.” That’s what Ollmann has done to arresting effect throughout Fictional Father. Jimmi’s “true” face, as Caleb calls it, evokes more feeling and information than words could, or at least more than words could in the same amount of space.

It’s common in comics to depict a sort of synesthesia to express emotions without cluttering the frame with speech and thought bubbles. Ollmann does this well, too. When Caleb and his boyfriend, James, get into a fight, for example, nervous sweat flies from the former’s scalp like water from a lawn sprinkler; severe vertical lines, commonly found in anime, envelop the latter to suggest frustration; and storm clouds hover over both characters, as if to forecast a failed relationship.

Ollmann makes other ingenious choices that complement his fiery writing and exemplify a “show, don’t tell” aesthetic. First, he quite brilliantly paints the entire book to match Caleb’s colour blindness, which Ollmann shares in real life. Then there are tiny details that make the book read like a lost diary: Sonny Side Up clippings, stained with coffee, document the strip’s stylistic evolution; blacked-out panels, which surface with increasing frequency as the story grows more stressful, symbolize Caleb’s exhaustion and mental shutdowns; and the lettering, which on occasion tilts slightly to the left, conveys a great deal of intention.

Each page of this faux memoir has a nine-panel structure, similar to that of Alan Moore’s Watchmen series. Unlike Moore, however, Ollmann generally stays within his self-imposed borders. When the panels do explode for the first time, it’s to demonstrate how one of Caleb’s illustrations goes viral on Instagram while he’s sleeping. It’s a funny bit, but one low in the book’s hierarchy of scenes and plot points. It would have been terrific if Ollmann had lifted more from Chris Ware’s Jimmy Corrigan: The Smartest Kid on Earth, which is a contemporary masterpiece that follows another stark family drama and manages to reimagine every rule of comics design. (It’s also a favourite of Caleb’s.)

Throughout the book, Caleb — so, by extension, Ollmann — mocks his own drawing ability and worth. This self-referential humour undermines the core drama and is especially frustrating as the narrative intensifies. That being said, reading Fictional Father is almost like watching Charlie Kaufman’s Adaptation, another work of art about art that cheekily muddies the author’s real and fictional lives. In both, the audience quickly realizes that the piece with which they are engaging is also the fictional work of art that the fictional creator is working on and complaining about. If that sounds self-indulgent and confusing, that’s the point. These are stories about the agony and the ecstasy of the process — explainers for civilians who don’t understand why making art is so hard.

“When his life was a mess, the strip was at its best”— that’s how Caleb, in a routine moment of self-analysis, explains the success of Sonny Side Up and, therefore, that of his father. If Ollmann’s real life isn’t a mess, he sure likes pranking his audience into thinking it is. Perhaps that’s why Fictional Father is ultimately so good.