In recent memory, no single issue has wreaked greater havoc in American politics than immigration. Terrorism cost lives, upended aviation after 9/11, and brought disaster to Afghanistan, Iraq, and Syria. Sub-prime mortgages cost Americans eight million jobs. A massive trade deficit with China made Wall Street, Omaha, and Silicon Valley billionaires unspeakably rich, while ripping the guts out of the manufacturing heartland. Donald Trump took malign Russian influence to the centre of the executive branch and triggered an attempted putsch. Yet the public policy file that has brought the most enduring derangement to the body politic is the one that governs who gets to come and who gets to stay.

Indeed, immigration is the shaky underpinning of a partisan house of horrors — a once-sound pillar weakened by perpetual neglect. In this, it is emblematic of America’s general tendency, at least since Lyndon Johnson’s administration in the 1960s, to eschew reforms that improve delivery of programs and services in favour of government by default and by abdication, where the only real mission is to “get out of the way” of a burgeoning private sector.

The last major overhauls of the U.S. immigration system include Ronald Reagan’s Immigration Reform and Control Act of 1986, which legalized most undocumented immigrants who had arrived before 1982 while making it illegal to hire them knowingly and penalizing those who did, and George H. W. Bush’s Immigration Act of 1990, which increased legal immigration ceilings and multiplied available pathways for professionals to enter the country. 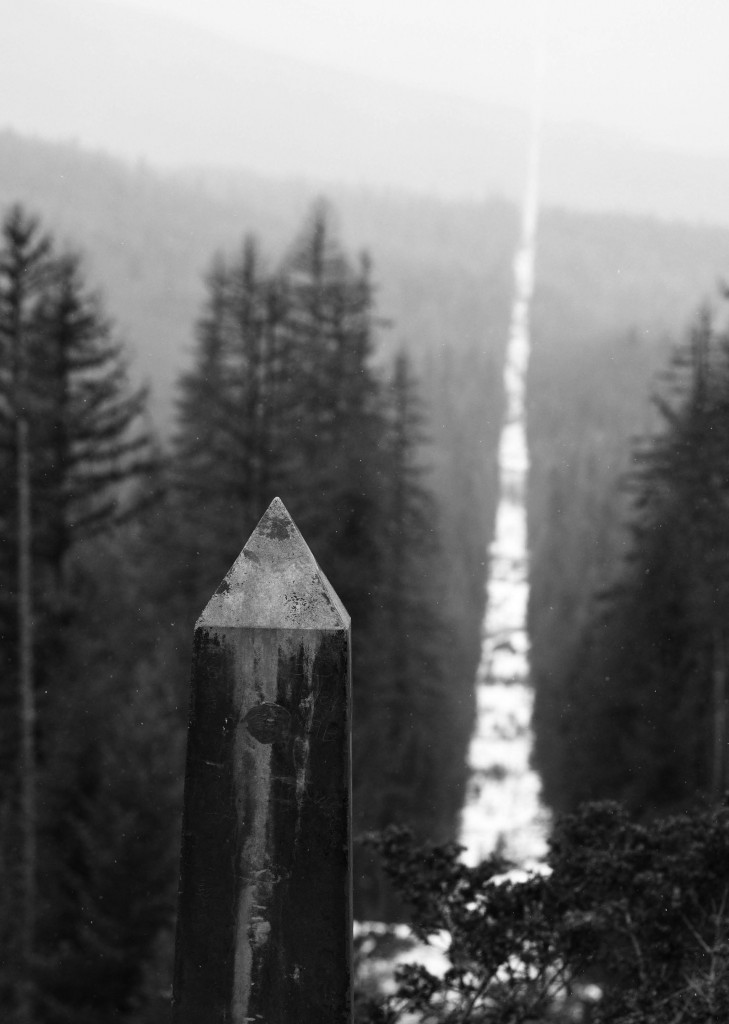 Borders run through it.
Image by Randy Beacham; Alamy

Early in George W. Bush’s first term, the 9/11 attacks derailed the administration’s attempts to achieve reforms in cooperation with Mexico’s president Vicente Fox. During his second term, the House and the Senate produced competing bills, neither of which was signed into law. The two houses of Congress have been ships passing the immigration icebergs in the night ever since. Despite his grandiose rhetoric, Barack Obama was never able to notch up an immigration success of any substance. More recently, Trump was Obama’s dystopian opposite, literally building walls and strangling refugee resettlement. And there the matter has rested — in hyper-partisan, catatonia-inducing, festering gridlock.

If neither the Democrats nor the Republicans have yet come to grips with the issue this century, it has not been for lack of trying. They have failed precisely because the stakes are so unbelievably high. As Trump, Brexit, the European migration crisis, and other instalments of today’s febrile democratic politics have shown, immigration policy can lose elections and decide the fate of nations, even continents. It can also rip parties to pieces or turn their members into zombie storm troopers ready to desecrate the inner sanctums of democracy itself.

America’s immigration dysfunction has whiplashed Mexico more than any other country. At the same time, no country has been more assiduous in regularly reforming its citizenship, immigration, and refugee programs — often in direct response to U.S. excesses — than Canada. And in its examination of our policy record, Paloma E. Villegas’s North of El Norte: Illegalized Mexican Migrants in Canada is by every measure a timely and welcome contribution to critical debates.

The figures are not definitive, but in the years since 1986, the number of undocumented immigrants living in the U.S. is thought to have peaked in 2007, at twelve million (over half of whom are from Mexico). The total has declined slowly ever since to about ten million out-of-status migrants (as we say in Canada). Here, by contrast, where statistics for this category of resident are even less reliable, the conventional wisdom is that around 100,000 people are without status (Villegas cites a range from 20,000 to 500,000).

The key difference is obviously Canada’s lack of a land border with Mexico, and a critical variable has been our policy on visas — requiring them in 2009 before shifting back to not requiring them in 2016. In 2015, there were only seventy-eight Mexican asylum claims in Canada’s system. In 2019, there were over 5,600 new claims, including by those seeking refuge from Trump’s coercive policies. That figure made Mexico the third-largest source country for asylum seekers to Canada, after India and Nigeria. (In 2008, before the visa requirement was imposed, 9,527 Mexicans claimed asylum.)

With her book, Villegas, who migrated to the U.S. from Mexico as a child and is now a professor at California State University, San Bernardino, sets out to understand this group of asylum seekers in Canada. Across three sections, she addresses the factors that influence or hinder decisions to migrate, the quest for permanent status, and barriers to employment and services. She chronicles the precarity of NAFTA-era life in Mexico — its “insecuritization”— due in part to state violence, organized crime, and even unscrupulous Canadian mining firms. Many feel unsafe, as Mexico’s homicide rate remains nearly fifteen times higher than ours, with over 35,000 victims in 2019 and again in 2020. For many of those seeking a better life, visa-free Canada is an obvious choice.

“What’s the solution? Mexico itself is in the throes of an asylum crisis.”

Villegas chronicles the maze of formal and informal networks that migrants navigate. She explains the “yearning” that motivates them — the desire to “have something” (tener algo) — as well as the endurance and resilience (aguantar) that sustain them. “This process is not a romantic ‘overcoming,’ ” she writes. “Aguantar can be a humiliating experience of tolerating negative treatment from employers, peers, and strangers. It can also illustrate an anxiety-producing process of waiting for secure status.” Villegas is clear-eyed about the available options for coming to Canada; records show that only 3,460 highly qualified Mexicans received PR status in 2019. But at the same time, the demand for asylum has grown, with pending Mexican refugee protection claims reaching 6,829 in 2019. There was a slight decline in 2020, but in 2021, 5,977 claims were already pending by the end of June; only 613 claims had been accepted at that point, out of 1,710 claims finalized.

The growth of asylum claims has an indirect effect on other Mexican applicants, as immigration officers check more closely for would‑be asylum seekers. Those who engage in “circular migration,” for example, including up to 28,000 seasonal agricultural workers, receive greater scrutiny. The increased number of claims can also make work and study permits harder for Mexicans to obtain. For those rejected, the return to Mexico is usually voluntary, though government agencies seek to ensure “deportability.”

Villegas touches upon populist rhetoric about “queue-jumping” and the reality of shadow-economy exploitation. Failed asylum claimants can pursue fewer and fewer alternatives, which might include Ottawa’s laborious humanitarian and compassionate grounds program, spousal sponsorship in genuine or contrived arrangements, or difficult-to-access study or temporary work permits. Many lose access to basic services.

Villegas is most effective at describing the ways in which our complex immigration system now pokes, prods, and monitors migrants, even as they face real hardship in precarious circumstances. She acknowledges the Canadian system is very different from its American counterpart. But accretions over two decades — ­stemming from concerns about terrorism, organized crime, fraud, and risks to public health — mean that international borders are no longer purely geographic. They also run through government practices, based on status and eligibility. In our drive to be generous and fair, we have often made our system increasingly surveillance-based and stratified. Migrants can face violence, ­distress, and other perils as a result of these “internal borders.”

What’s the solution? Mexico itself is in the throes of an asylum crisis, with 190,000 claims made in that country over the past five years, as many Central and South Americans flee gang violence and economic hardship. Around the world, 82.4 million are displaced — a figure that has been growing steadily since the Syrian nightmare began a decade ago. Meanwhile, the U.S., the European Union, and other traditional destinations for the persecuted have been tightening rules for asylum seekers. In recent years, Canada has permanently resettled more Convention refugees than any other state, while maintaining high overall levels of immigration.

Countless studies have shown that refugees and migrants have the best outcomes when they enjoy full access to work, education, health care, and other services. Such access is sustainable only when claims are made or resettlement occurs through regular, rules-based channels. Irregular migration on a large scale tends to kneecap public support for the world’s most vulnerable. America’s failures to reform immigration have resulted in ten million disenfranchised people and made the U.S. a less generous country, just as Europe’s 2015 migration crisis made the EU less generous while inducing the self-harm and policy madness of Brexit.

Canada needs to guard against further proliferation of the Hydra-headed procedures enacted by recent reforms. Above all, we need to combat the phenomenon of “illegalization,” while ensuring those without status have decent options for achieving it. Mexico has been a dynamic trading partner, as surging numbers of students, workers, immigrants, and tourists all attest. And our strong suit, in contrast to the barriers presented in El Norte, remains our sustained public support for planned economic immigration and seasonal labour, while welcoming the highest numbers of permanently resettled refugees on the planet. We need to show other countries that rules-based migration, along with generosity to persecuted groups and the most vulnerable, goes together with prosperity, national success, and global citizenship in the twenty-first century.

Chris Alexander served as Canada’s ambassador to Afghanistan from 2003 to 2005.