Congress’s Own: A Canadian Regiment, the Continental Army, and American Union

As a 2,000-pound cracked copper bell, hung high in the tower of the Pennsylvania State House, announced the first public reading of the Declaration of Independence on a summer’s day in 1776, a battered army, “driven to the sad necessity of abandoning Canada,” trudged south toward Lake Champlain. Its retreat did not bode well for a nation a mere four days old.

Just over a year earlier, alarmed by the prospect of an invading force, Sir Guy Carleton, the governor of Quebec, had declared martial law. His counterpart in Nova Scotia, Francis Legge, soon did the same. Expeditions led by the likes of Ethan Allen and Benedict Arnold were coming to seize “the door of Canada,” with hopes of inviting both English and French Canadians to join a nascent revolution. The plan was not unlike breaking into a house only to ask its owner to join in the next caper. However brazen, it worked for a time, at least among habitants who were disenchanted with British rule and the seigneuries and among those who truly agreed with the pamphleteer Thomas Paine that independence from England was “not the affair of a city, a country, a province, or a kingdom, but of a continent.”

Though his motives were not ideological, Moses Hazen was one who joined the cause. A justice of the peace and seigneur along the Richelieu River, Hazen saw an opportunity for glory and gain and helped recruit neighbours willing to serve in a new regiment, the Second Canadian, that would answer directly to the Continental Congress — not, like most military units in the war, to a state government. When they joined the 1776 retreat, many of Hazen’s men became stateless in more ways than one. 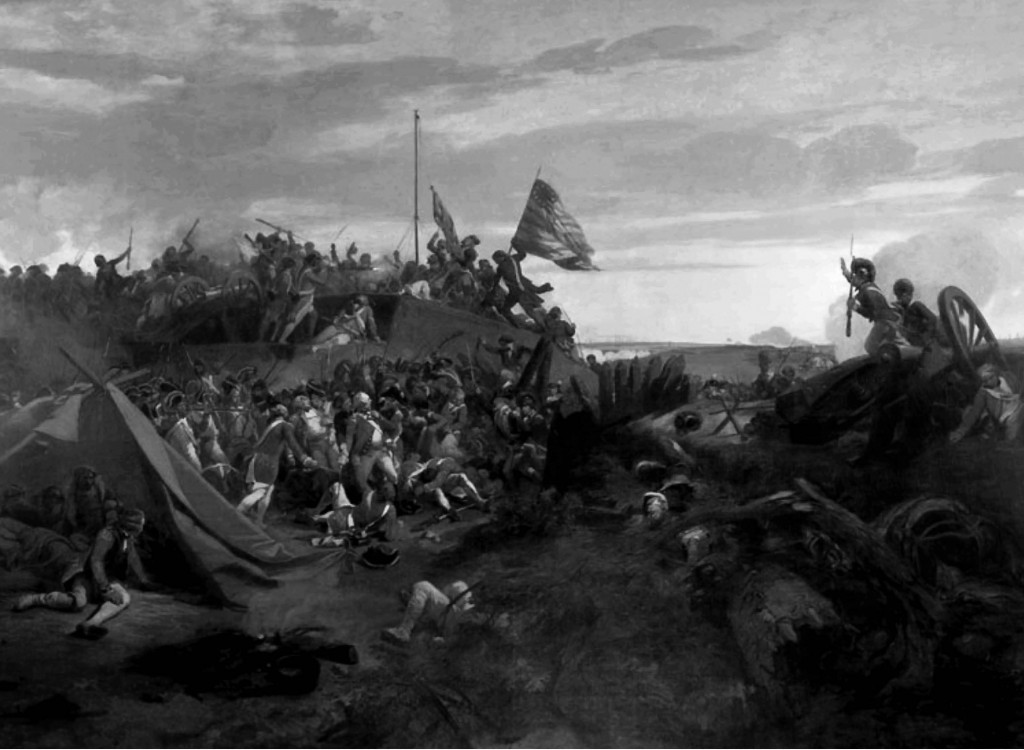 They fought with firmness and discipline on behalf of America.
Image by Eugène Lami, 1840; Wikimedia Commons

Two years later, in spring 1778, Colonel Hazen and his field-tested crew were still together as Congress was rallying support for the Articles of Confederation, which promised Canada “all the advantages of this union” if it decided to cast its lot with the embattled United States. This time the regiment was gathered in Albany, eager to cross the border once more. While their arsenal of propaganda included French translations of the Articles, their clothing and matériel were wanting. One reason for their poor preparation was that the commander-in-chief of the Continental Army, George Washington, had likened a second invasion of Canada to “the child of folly.” But even as Washington worked to dissuade Congress from the idea, Hazen remained enthusiastic, telling a major general that his 366 able-bodied soldiers and officers were “so warm for the expedition that they would consent to go almost Naked into Canada.” (Regimental strength often fluctuated, from an estimated low of 487 to a high of 624, though rarely were all battle ready at the same time.)

The Second Canadian would get closer to home the following year, when Washington directed Hazen to clear a road into the heavily forested Coos Country, a region north of Haverhill, New Hampshire, that was within striking distance of Quebec. Yet in this endeavour, the regiment was, unwittingly, little more than a pawn, a way for Washington to, as the future president put it, “excite jealousies of an invasion of Canada, and induce the Enemy there to keep their force at home.” The ruse over, Washington ordered Hazen to march his men out of the Coos Country in October 1779, so they might rejoin the Main Army north of New York City.

With Congress’s Own, Holly A. Mayer tells the story of Moses Hazen and his regiment, which, despite its name, was never purely Canadian. But no matter. As the American historian would have it, the Second Canadian was something of an early melting pot, which a young nation finding its feet and its identity borrowed from the neighbour next door. “By the declaration of the Continental Congress,” she writes, “it was an armed force of peoples from different colonies, countries, classes, ethnicities, and religions united against the authority of Great Britain.” As one of the longest-serving units in the war, the regiment — called Congress’s Own by many, much to the chagrin of Congress itself — offers historians “an example of a developing, contested political identity that intermixed Continental and American senses of self or character.”

Hazen and his men may get top billing in Mayer’s drama — about how the Continental Army, in both its internal affairs and its external interactions, “promoted beliefs and demanded behaviors that challenged and modified its members’ original characters”— but they are too often denied a starring role in a book that gets bogged down in exhaustive yet often fragmentary research, much of which would have been better kept in footnotes. At times, Mayer structures her account thematically, and the chronology turns muddy. Elsewhere, she saturates the page with play-by-play details best suited for a military college, not for a monograph that anyone would actually want to read. Her analysis can also strain credulity, as when she demonstrates soldiers’ “diversity” by pointing to their height (five feet ten inches versus five feet four inches) and hair colour (fair versus black).

However distracting, some of these shortcomings could be overlooked, but Mayer blunders with an introduction that does a true disservice to the whole company. Indeed, her attempt to shoehorn the notion of “borderlands” into her book is borderline unforgivable:

To analyze the army as a borderland requires defining it not just as an instrument securing borders or asserting control on “internal frontiers,” but also as a peripheral province that demonstrated multinational or transnational characteristics, aided by hybridization if not assimilation of the peoples and cultures within it, and had institutional means by which to determine who or what may enter or not — namely, who belonged.

It is certainly the case that borders, whether geopolitical or cultural, were “porous and malleable” throughout the Revolution and well into the nineteenth century. But sentences such as this betray a critical insecurity that’s unbecoming of an emeritus professor who needs to impress neither a doctoral panel nor a hiring committee. It is as if Mayer got lost in the so‑called spatial turn. Far too many pages read as if they’re torn from Mad Libs and the author has enthusiastically inserted “borderland” into all the blanks labelled “unnecessary jargon.” In other places, the word makes an appearance only in a chapter’s closing sentences, as if Mayer briefly forgot to drive home her point. The result is uneven theoretical posturing that detracts from a subject that is, on its own, quite compelling.

Ironically, Mayer does almost everything she can to lose the battle for her readers’ attention before they ever come to see how Canada helped America win its war. And that’s a shame. For those willing to tackle the stylistic redoubts, Congress’s Own does offer some fine moments that feature famous players and memorable quips. George Washington comes across as highly skeptical of Hazen and perpetually frustrated with his own civilian overlords. The eventual traitor Benedict Arnold comes across as bad news from the start. The Continental Congress, full of “armchair generals,” comes across as dysfunctional and argumentative, not unlike the U.S. Congress today. When Mayer gives him extended attention, Hazen proves a complex character worthy of investigation by Alan Taylor or Jill Lepore. The same is true for John H. Hawkins, a former printer’s apprentice from Philadelphia who kept a notebook throughout his years of service. As he marched from town to town and settlement to settlement, the sergeant major actively “checked out what the printers were doing and noted proposals to print a newspaper there.” Indeed, if Mayer’s work were structured differently, Hawkins on his own could drive much of the narrative.

It isn’t as if Mayer can’t sustain the action. In fact, she does just that when describing the Coos Country expedition, when the regiment was “firmly engaged in introducing American forces — and, by extension, Congressional authority — to the peoples of the region, as well as in building a vital line of communication.” This section is full of texture. There’s fourteen-year-old Stephen Burrows, for example, who tried to enlist multiple times only to succeed and then promptly desert. The boy’s father had to write to Washington himself to undo the damage. It was also in the Coos Country that the Second Canadian recommended an officer’s commission for Joseph Louis Gill, a local Abenaki chief. Though Washington endorsed the recommendation and sent it along to Congress, Gill ultimately sided with the British.

Many in the Second Canadian intended to serve until the British were driven out of Quebec. Although that did not happen, the regiment did help bring the Revolution to a close. As none other than the French commander Lafayette put it, Hazen and his men — Protestants and Catholics, those who spoke English and French and German, individuals who would not have worked side by side in most other circumstances — fought with “admirable firmness and discipline” in October 1781 at the Siege of Yorktown, the last major engagement of the war. Many would stay for another two years, as the Continental Army kept watch on those captured in the final days of active fighting and wound down its operations. Then, in 1783, the nearly 500 auxiliaries left in Congress’s Own dispersed. Some returned to Canada. Some headed to New York or Vermont to take up the “bounty lands” that had been promised to them in exchange for their service, while others spent years agitating for Congress to cough up their proper pay and pension. The last of them, John Shepherd, died in 1857, nearly eight decades after he enlisted.

Despite its limitations, Congress’s Own is built upon laudable research. Ultimately, it does more than enough to show that the Second Canadian would make for a wonderful popular hist­ory — exactly the type of thing that the Canada Council ought to be supporting alongside the endless supply of memoir now being published in this country. Just imagine this curious chapter of our history, full of sundry characters with various aims and motivations, in the hands of a Charlotte Gray or a Mark Bourrie. Holly A. Mayer has supplied a writer like that with the ammunition for a truly good book.