A Dream of a Woman

For the last decade, Casey Plett has been a lodestar for many transgender writers. Her portrayal of unapologetically trans characters living unapologetically trans lives has opened a door for authors to slough off the impulse to write for a mostly cisgender audience. Plett’s fiction has, of course, received acclaim beyond her community, in large part because of her talent for rendering people and relationships, their tragedies and delights, with heartbreaking care. Her books present deep emotional struggles in prose that is artful and accessible, which exemplifies the fact that good writing from (and for) the margins has the capacity to build bridges for any reader bold enough to give it a chance.

Plett emerged onto the scene in 2014 with her debut collection, A Safe Girl to Love, which was followed in 2018 by Little Fish, a novel. There are many thematic similarities between her latest gathering of short stories, A Dream of a Woman, and the rest of her oeuvre: friendship, desirability, sex work, addiction, and Mennonite culture. Characters from A Safe Girl to Love also appear in parts of her new book — ­particularly the tales set in Manitoba and New York City — which creates a fun Plett multiverse for those already familiar with her titles.

Each narrative centres on a trans woman; most of these protagonists transitioned years before the events depicted here. “Hazel & Christopher” follows two childhood friends who reconnect later in life and develop a new relationship that feels like an inevitable evolution. “Floodway” is about a woman who meets a guy at a bar in Winnipeg and drives out into the prairies with his friends to watch a meteor shower. “Enough Trouble” is a long story set in a small Manitoba town where a woman experiencing housing insecurity — and who has run out of options — crashes at the apartment of a girl she hardly knows. 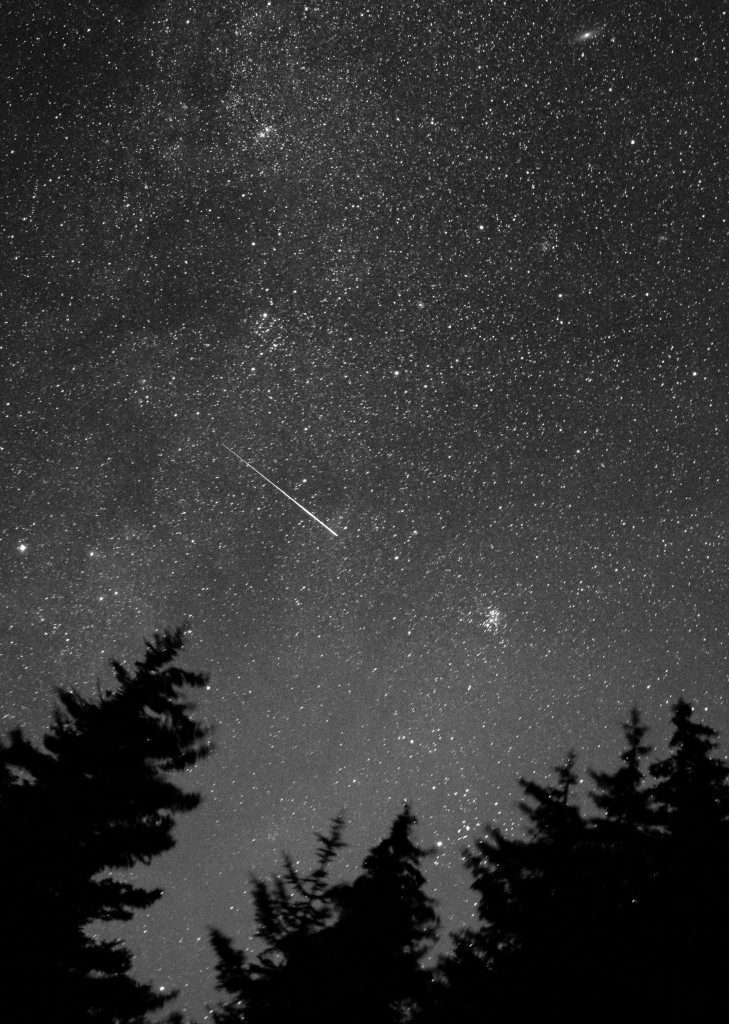 They went to watch a meteor shower.
Image by Bill Ingalls; NASA

Of all the stories, “Obsolution” is the most evocative. Broken into five episodes, it is peppered throughout the collection. The first section opens when Vera (then meandering through life as David) meets Iris and they begin a years-long, shape-shifting relationship that spans the rest of the narrative. As Vera slowly develops into herself, a couple of moments register as particularly moving: when she begins to use “she/her” pronouns and when she introduces herself as Vera. The name — which she sees on a Facebook thread when a stranger comments on a post — comes as a bit of a surprise to her when she speaks it: “And now it was just out of her mouth. It had just ­happened.” In both instances, the change occurs very gently, in mid-paragraph, without being treated as climactic. The earlier switch in Vera’s pronoun is not noted in the text. Since the story is told in the third person, the narrative simply adjusts how it refers to its protagonist from that point on. These moments unfold amid the banalities of Vera’s everyday existence, as just another curve in life’s winding path.

The way Plett crafts these episodes — ­without spectacle — is symbolic of a shift that has occurred in fiction over the past five years or so. Where coming out and transitioning were once the primary conflicts of stories, more and more writers are choosing to decentralize these acts.

Plett’s depiction of transition as a process rather than a single event broadens the nature of becoming in these tales. Trauma must be worked through, toxic people should be removed from one’s inner circle, and the road to stability and self-love will have some bumps along the way, but transitioning is part of an ever-evolving state of being. This approach makes it harder for readers to base their impressions on identity alone and perhaps marks the space the literary landscape has made for the grey, troubling aspects — as well as the joys — of trans life more generally.

One such nuanced element of A Dream of a Woman is Plett’s focus on older characters’ very complicated feelings toward those who are just at the start of their journeys. Take “Hazel & Christopher,” where Christopher reveals in a twist at the end that he is also trans, which crushes Hazel and causes them to break up. “I don’t want you to transition,” Hazel admits to herself. “I don’t want you to be a girl. You were the sweetest boy to me, and I loved you, and I still love you, but now I have to help you.” In the second segment of the split story “Couldn’t Hear You Talk Anymore,” Tiana pulls away from offering support to a girl who posts something online about how scared she was when a person in a van threw a bottle at her the night before:

Like usual, I started to reply in the comment box. Then I stopped. I shut the laptop. Put it under the bed. And something in my heart unknotted and pulled loose. I felt still and at peace. I haven’t even opened it back up since then. It’s the best thing. It’s an incredible thing, to be free.

Both moments speak to the particular limits of the characters themselves, but they also reflect broader themes of the importance of establishing boundaries between oneself and the suffering of others.

When it comes to the book’s structure, some readers will be left questioning what, exactly, A Dream of a Woman means to do. The first ten stories alternate between stand-alone narratives (aside from “Couldn’t Hear You Talk Anymore”) and sections of “Obsolution.” The episodic nature of the latter suggests that the collection should be read from beginning to end, but then comes the penultimate tale, “Enough Trouble,” which stands at over eighty pages. While it’s an enjoyable read, “Enough Trouble” is a long haul that feels even longer while one is still recovering from the emotional hangover of Vera’s account. The overall project might have been tighter without this protracted story, as it wrestles attention away for the last third of the book. But one should not look a gift horse in the mouth, and having more Plett to read rather than less is no bad thing.

These few structural matters aside, A Dream of a Woman is Plett’s best work to date and reminds us that she is one of our finest writers. There is something powerfully intimate about the voices of the characters paired with the matured texture of the prose. Told with exquisite beauty and a lack of pretense, these emotionally vibrant stories come alive in their quiet moments. It is hard to imagine a reader this collection could not reach.