In the 1970s, when I worked on CBC Radio’s Sunday Morning, our producer Mark Starowicz drummed one rule into our heads: “Make sure you report accurately the number of steps from the sidewalk up to the doors of the U.S. Capitol. If you get the small things right, the audience will be more inclined to trust you on the big ones.”

These wise words came back to me as I began reading Peacekeeper’s Daughter. As Tanya Bellehumeur-Allatt describes how she and her Canadian family wandered around Jerusalem, trying to get used to the Middle East, where they’d be living for the next eleven months, she writes that they were staying at the American Colony Hotel in the Muslim Quarter. That’s wrong: the Muslim Quarter, like the Jewish, Armenian, and Christian Quarters, is located inside the walls of the Old City, while that hotel is situated in Palestinian East Jerusalem. Recalling when her family climbed to the Temple Mount, she refers to the golden-roofed Dome of the Rock as a mosque. Wrong again: the Dome is a shrine. The mosque is the great building next door, Al‑Aqsa.

This may sound like hairsplitting, but the city under discussion is perhaps the only one in the world where literally every square inch of ground is contested. And to return to Starowicz’s advice: Can we trust Bellehumeur-Allatt’s larger story if she gets such small but important things about Jerusalem wrong? 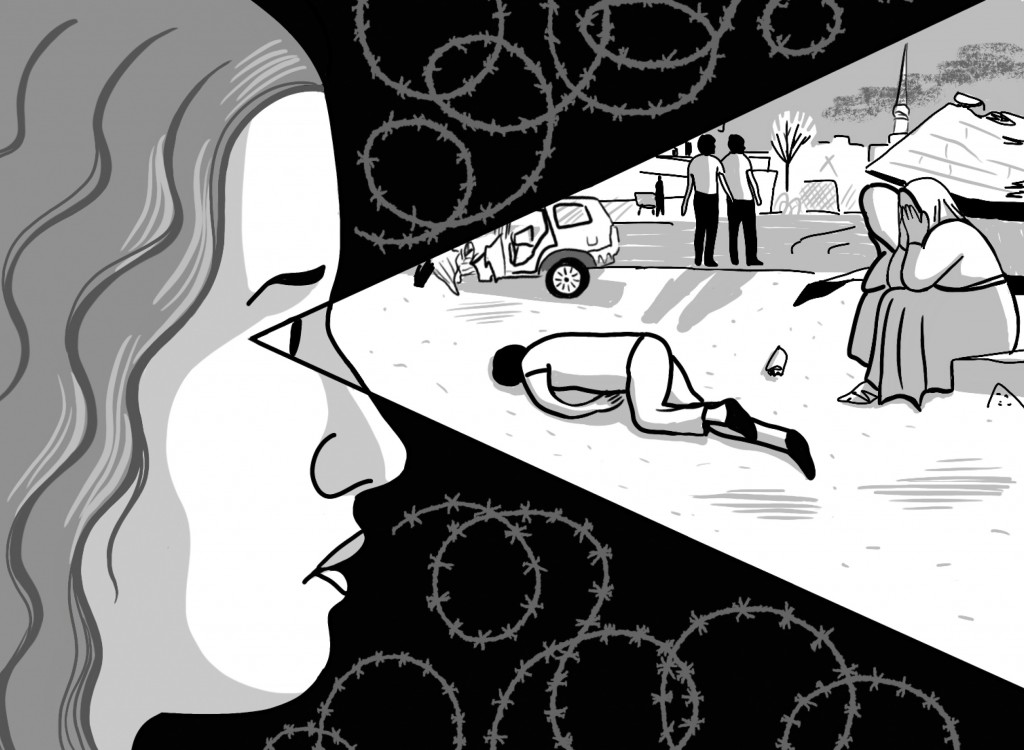 As seen by those who bear witness.
Image by Jamie Bennett

That depends, in part, on how you define her story. As an account of what happened in Israel, Syria, and Lebanon during the white-hot years of 1982 and ’83 — when Bellehumeur-Allatt’s father was posted to the Golan Heights with the United Nations Truce Supervision Organization and brought his family along — it is scattered and full of holes. But as a coming-of-age tale of a twelve-year-old girl — with a nervous mother, a remote dad, and a grungy fourteen-year-old brother — trying to come to terms with her own identity against a landscape of violence, trauma, and scarred beauty, it’s an interesting and at times quite riveting read. And Bellehumeur-Allatt covers her backside somewhat in her author’s note, where she writes, “This is not a journalistic work; it is based on one person’s experience, filtered through memory and interpretation.”

The quick version of Bellehumeur-Allatt’s story goes like this. In August 1982, while her father and the family were posted in Yellowknife, they got word that he was being sent to the Golan Heights, and her mother insisted that they all go with him. By early September, he had settled them in the Orthodox neighbourhood of Tiberias, a city in northern Israel, on the shores of the Sea of Galilee; from this base, he headed to the Golan for peacekeeping stints of two weeks each. But things were heating up just to the north, in Lebanon: the Israelis had invaded the country in June, the Lebanese president was assassinated in September, and that event was immediately followed by the massacre in the Sabra and Shatila refugee camps near the Lebanese capital, which resulted in somewhere between 460 and 3,500 deaths, depending on which account you choose to believe. Not surprisingly, Bellehumeur-Allatt’s father was pulled from his rather sleepy post on the Golan into the cauldron of Beirut, where his role remained that of an unarmed UN observer. Again, Bellehumeur-Allatt’s mother insisted on the family going with him, and on New Year’s Day 1983, they made their move. For the next seven months, except for brief holidays on Crete and Cyprus, they lived amid the bloody Lebanese Civil War, personally experiencing the bombing of the American Embassy in Beirut. After her father was reposted to Sherbrooke, Quebec, they learned on the radio of the suicide bombing of the U.S. Marine barracks, in October 1983.

But all of this high drama and tragedy is simply background to Bellehumeur-Allatt’s own solipsistic tale of growing up as a military brat. Her focus veers wildly from concern with her appearance (whenever she exerted herself, her face turned red, with a circle of white around her mouth) to her longing to be noticed more by her dad (“I wanted to be my father’s chosen companion, and the keeper of his secrets”) to criticisms of her mother (“When I was older, I had no intention of being dependent on a man, or having to reinvent myself each time his job moved him to a new part of the world”) and mostly, of course, to boys (“His skin was bristly. . . . It smelled like Juicy Fruit gum. My whole body went electric”).

It’s quite a feat to couple the chaos of the Middle East with the chaos of adolescence, and for the most part Bellehumeur-Allatt makes it work, although there are so many violent and eccentric episodes piled one on top of another that a reader could be forgiven a touch of skepticism. Did this all really happen to one family during an eleven-month stay? On their first day in Jerusalem, we’re told, a Palestinian “guide” attached himself to them and then robbed them at knifepoint. Then Bellehumeur-Allatt and her brother, Etienne, were stoned as they walked, in casual Western garb, through Orthodox streets in Tiberias on Yom Kippur. Later, their school was trashed, apparently by black Ethiopian Jews (Falashas) who lived in the neighbourhood. And when their parents took the family for a little R and R in Damascus, their mother shared a nostalgic opening sally: “Your father took me here on my first visit to the Middle East, in ’77. It was the day after a public hanging. The bodies were still dangling from the scaffolding.” All of this before they even got to Beirut.

“Did this all really happen to one family during an eleven-month stay?”

In that deadly city, two dramatic events shook their lives. One winter evening in the middle of a power failure, an Air Force captain knocked on their door and explained that Bellehumeur-Allatt’s father had gone missing. This news prompted Bellehumeur-Allatt and her mother to launch into a fury of house­cleaning; a few hours later, her father walked in the door and said, “All I want is a bath.” Then in April, while Bellehumeur-Allatt was reading Mark Twain in grade 7 English, the American Embassy, inside the same guarded compound as the school, was bombed, causing sixty-three deaths. Her teacher just went on teaching, but Etienne’s art teacher decided to search for her husband, who worked at the embassy. She took her entire class along with her, perhaps a criminally irresponsible act but also perhaps understandable. “We found him. He was all white. Covered in dust,” Etienne told his sister on their walk home. “He was holding onto a woman whose face was cut up. Her eyes were full of blood.” As a result of this terrible excursion, the young man suffered from what we would now call post-traumatic stress disorder, mainly manifested by screams and nightmares. Bellehumeur-Allatt, for her part, began cutting herself.

And how about this? One day, just as darkness was coming on, Bellehumeur-Allatt’s father loaded the family into the car and took them to visit the now deserted camps of Sabra and Shatila. They stayed inside the vehicle while he pointed out the enormous hill beside them, explaining, “They piled the bodies up with bulldozers and then threw dirt over them.” As they drove away, her mother asked, “Did we really have to see it?” His reply: “Someone has to.”

With those three words —“Someone has to”— Bellehumeur-Allatt’s father pinpointed a major raison d’être of peacekeeping, as it was originally defined by Lester Pearson during the Suez Crisis of 1956: bearing witness. Canadians can be justly proud of the approximately 125,000 peacekeepers we have deployed in the decades since, to the Middle East, Congo, Cyprus, the Balkans, Haiti, and, currently, Mali. But the twin disasters of Somalia and Rwanda in the early 1990s brought about a precipitous drop in our numbers: while in 1992 we had 3,825 peacekeepers in the field worldwide, we were down to 176 by 2019, and that’s since fallen even further. At an international peacekeeping summit in 2017, Justin Trudeau promised the UN a 200-strong quick-reaction force, but so far there’s no sign of it materializing, even after Washington called on Ottawa to fulfill its commitment late last year.

Above all, Tanya Bellehumeur-Allatt’s memoir is a stark reminder of how much “normality” is sacrificed by those who serve in the Canadian military and their families, whether they are headed for combat or for peacekeeping. Yes, Bellehumeur-Allatt’s mother could have refused to go to the Middle East, but the health of her marriage and her desire for family cohesion were apparently stronger concerns.

“We’re different people now,” Bellehumeur-Allatt said to her brother years later, in December 2015. “Yes and no,” he responded. “I know what he means,” she writes at the end of the book. “For all these years, we’ve carried these memories inside us like grenades.”