In my small ravine-defined corner of Toronto, there have been unusual wildlife sightings in recent months. Early morning street visits from rabbits and hares can, of course, be explained by residual lockdown quiet and the constrained din of the nearby Don Valley Parkway, yet curiosity does seem to play a role. One day over coffee, I watched a hare take up curbside sentry duty, lingering as if assessing its options before bolting down the street toward the park. Similarly, several daylight appearances of coyotes and foxes in cemeteries and golf courses across the city strike me as oddly out of the norm.

In Toronto and elsewhere, we humans have taken to walking, jogging, and cycling pretty much year-round and in greater numbers than before the pandemic. And because we’re outside so much, wildlife has become more evident than ever — especially, it seems, the hawks.

Among the most widely scattered raptor species in North America, red-tailed hawks have become not just more visible but bolder. When owls hoot at dusk, we know mice and rats are around. Likewise, when a sharp-shinned hawk positions itself high in a Norway maple at mid-morning, we can be sure it’s not napping. But I didn’t expect to see a juvenile red‑tail atop a two-foot flagstone column by my neighbour’s driveway the other day, a young grey squirrel pinioned beneath one talon. Almost a foot tall, the bird was standing at waist height as I passed by on the road. Slowing, I turned to look and realized it had not only descended like a missile from the sky but had arrived mere seconds before I did. The creature fiddled with its catch just an arm’s length away — close enough for me to get the measure of its heft, its thick feathered legs and powerful hooked beak and beady eyes that can sight a mouse from a hundred feet in the air. 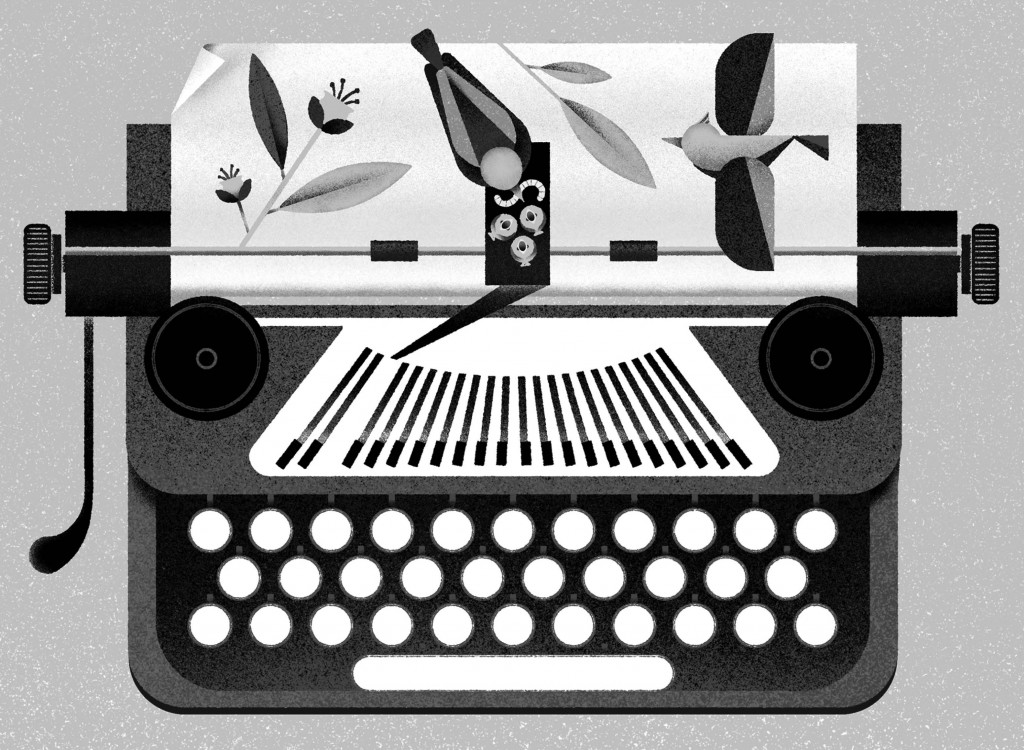 I slowly backed away, as you would from a shrine, pausing before resuming my walk. Forty-five minutes later, I returned to find everything back to normal, as in a fairy tale. The little squirrel had presumably been carried off, leaving nary a drop of blood nor a tuft of fur. I was strangely affected, though, perhaps because I’d never reckoned with a red‑tail’s actual size before. I’d lived with the binocular image, and I was somehow surprised by its bulk at ground level. For although it is half the size of an eagle, this hawk is still one very large bird of prey. Finding myself in its presence at close range was daunting.

There are many ways to appreciate birds, including being among them. This is not easy to do by proxy, but Merilyn Simonds’s Woman, Watching: Louise de Kiriline Lawrence and the Songbirds of Pimisi Bay offers a way. The book begins with evening grosbeaks — creatures of inexcusable beauty and the colour of sunshine — frequenting the author’s bird feeder in Ontario’s Near North. She shared the routine of feeding them with her distant neighbour. And it turns out her neighbour, Louise de Kiriline Lawrence, did a lot more than feed birds. What follows is a biography that combines de Kiriline Lawrence’s life story with natural history, science, and memoir, becoming in the process a meditation on ways of thinking and being in the natural world. Simonds herself is an experienced birder, which is to say avid, informed, and gifted. And her book is a reminder that birdwatching is no simple pastime but rather one that requires physical stamina, extreme patience, and, at times, serious research.

Birding is an activity, a preoccupation really, rooted in a fascination with creatures not known for staying put. While a popular collective hobby, it is just as often solitary. Watching birds can quickly become more than a pastime; it can become a way of understanding nature by intently experiencing it, even from an airport or a ferry terminal. We are guided in this endeavour by those skilled amateurs and lifelong enthusiasts we call naturalists. They can be actual scientists or Indigenous elders, for the term covers a lot of territory. Simply put, it applies to people with a depth of experience and breadth of knowledge. Some of these people we know from books, including Ernest Thompson Seton and his Wild Animals I Have Known, from 1898, and Fred Bodsworth and his Last of the Curlews, from 1955. Both men wrote “realistic wild-animal fiction,” to borrow a phrase from Seton’s time.

Inevitably, birding presents us with an existential conundrum, for who is watching whom? The birds — at least for the time being and despite their reduced numbers, especially since the 1970s — are still here with us, wary and watchful as ever. Some migrate, just as people do; others never leave. Watching whatever kind is one of our most versatile obsessions. As harbingers of morning and evening, these diverse animals help us mark the passage of time. And they often stand in for the soul in religious iconography.

Woman, Watching is the story of Louise de Kiriline Lawrence, a self-taught naturalist who had a simple house built for herself in the woods of northeastern Ontario in the 1930s. With exceptional skill, resilience, and ingenuity, she made a life there, watching birds and writing about them. For the next fifty years, she kept meticulous records of those she saw, the nests she watched, and the individual animals she banded (for some time, her log cabin actually functioned as Canada’s northernmost banding station). This in itself is extraordinary. Then add the part about de Kiriline Lawrence gaining recognition in the ornithological world for her study of the red-eyed vireo and for being the first Canadian woman elected as a fully fledged member of the prestigious American Ornithologists’ Union. De Kiriline Lawrence, who died in 1992 at the age of ninety-eight, is also one of the very few women to have a bird named for her: Coccothraustes vespertinus deKirilina, a type of evening grosbeak.

De Kiriline Lawrence was able to earn a living in her later years as a freelance writer, publishing scientific articles for The Canadian Field-Naturalist and dozens of pieces for Audubon. She made a significant contribution to what is known about several species, most particularly the red crossbill, Loxia curvirostra, part of the finch family. In all, she published seven books, corresponded with experts (including ornithologists at the Royal Ontario Museum, in Toronto), and accomplished it with little more than binoculars, carbon paper, and a typewriter.

“Early on in the bush, de Kiriline Lawrence learned that ingenuity is an essential survival skill.”

Although de Kiriline Lawrence was born into “the privileged world of the Swedish gentry,” she didn’t always have it easy in Canada. She lived in an environment she loved, however, and was blessed with the character and skills that made things possible. When she moved to this country, in 1927, she got a job with the Canadian Red Cross in the North Bay area; in 1934 she was hired by Allan Roy Dafoe, the obstetrician charged with caring for Elzire Dionne and her quintuplets. (She didn’t much like the circus surrounding the famous little girls, and, to her credit, she tried to shelter the family.)

The goddaughter of a queen and a debutante schooled in five languages, de Kiriline Lawrence had trained as a nurse and worked for the Danish Red Cross during the First World War. It was then that she met a Russian prisoner of war named Gleb Nikolayevich Kirilin. The two married in Stockholm, but Gleb soon took a commission in the White Army, which “was pushing south from a front on the polar barrens of northern Russia.” Louise followed him for more than a year until he was captured by the Bolsheviks. Although his death was not officially confirmed, he never returned.

At forty-one, de Kiriline Lawrence left nursing and moved to nearby Pimisi Bay on the Mattawa River. She called her cabin the Loghouse Nest, and while she was opting for an arduous life, she possessed the necessary grit in spades. Soon, a “permanent fixture” on her property was Leonard Lawrence, a local who was in essence a handyman, though that doesn’t begin to describe the array of skills such jacks-of-all-trades have in remote communities. Carpentry, plumbing, mechanics, electrical work — and a general ability to improvise on everything else. Indeed, early on in the bush, de Kiriline Lawrence learned that ingenuity is an essential survival skill.

Simonds is a pioneer in the world of creative non-fiction and a wonderful match for her subject. She is a thoughtful writer who handles complexities with aplomb — with both insight and delicacy. Thus, when she describes the romance between Louise and Leonard, she doesn’t skirt the utter unlikelihood of their marriage. She: forty-five, tall, well-educated, and a world traveller. He: thirty-four, short, little formal schooling, someone who’d never ventured beyond the district of North Bay. But Simonds cleverly leaves it to de Kiriline Lawrence to explain matters, quoting a love letter she wrote to her husband as he went off to the Second World War: “At first I thought you an ordinary man who would just touch my life at one point and then go out of it. But what you carried inside of you was not common. It was deep and strong and true. It was inevitable that once it was at last revealed to me I should respond. . . . You have kindled a love that I have not given to anyone else. . . . If you should not come back it will remain with me as if you had not gone, and if I should not be here on your return it will not be taken from you by my going.”

De Kiriline Lawrence’s interest in nature had been her father’s doing. Sixten Flach was a naturalist and early conservationist who took his daughter walking in the woods as a toddler. Her childhood experiences on the land stayed with her throughout her eventful life. “The loss of Svensksund left me with a dream, nothing else,” she once wrote of her family home, “a dream of a piece of land where once again I could live and take root.” Which is exactly what she would ultimately find, and what she would ultimately do at the Loghouse Nest.

Simonds might never have happened upon de Kiriline Lawrence had she not purchased an undeveloped acreage with an R2000 prefab near North Bay and begun spending time there. “My feeder was half an hour southwest of Louise’s, flying as a hungry bird might, along the canopy-highway of boreal forest.” We can be grateful she did, as she has captured with this book the life of a singular individual and Canadian legend.

Susan Crean is the author of several books, including The Laughing One: A Journey to Emily Carr and Finding Mr. Wong.