Why are Canadians so good at writing short stories? Alexander MacLeod, with his richly textured narratives about the difficulties of being human, is a case in point. Flawless in design and spiked with humour, the eight tales in Animal Person are a tour de force. This collection is MacLeod’s follow‑up to his Giller-shortlisted debut, Light Lifting, published in 2010, and in it, he shows the same fineness of insight and fiercely high level of accomplishment.

The stories in Animal Person present a master class in understatement. Most begin in the middle of a situation, then widen in scope and complexity. In the subtly unsettling “The Ninth Concession,” a great deal is happening behind the scenes without being stated outright. Belatedly, you realize that the adolescent narrator who changes into his swimsuit on the patio is being watched by Mr. Klassen from his second-floor office. You realize too, or at least you think you do, why Mr. Klassen’s son (supposedly the swimmer’s friend but really a rival) points to a picture of a red and black corset in the Sears catalogue and chooses it for himself. You begin to see why Edgar, a Spanish-speaking migrant worker on the Klassens’ tobacco farm, makes a chopping motion in the narrator’s direction, as if he were wielding “a lightweight axe, like a tomahawk.” After a drunken celebration at the end of the harvest, the silver edge of a tobacco hatchet glints in Edgar’s hand. These details add up to a story — about a crime, about help from unexpected quarters — where everything happens slightly beyond the range of perception.

For the most part, these stories probe relationships between spouses, friends, cousins, siblings, and strangers. In “Once Removed,” a young couple, Matt and Amy, are ordered to come to dinner by Greet Walker, who is Matt’s “father’s mother’s oldest sister.” Calling her “Matt’s great-aunt” alone would not convey the complex obligations that come with family, even distant family. Amy is wary of this relatedness, which just means “everybody was mixed up in everybody else’s business.” As it turns out, Greet ropes Matt and Amy into a cockamamie scheme as efficiently as she ropes their infant daughter into a chair. The weirdness of the situation proves Amy’s point: whether she wants to or not, she becomes mixed up in Greet’s plotting. 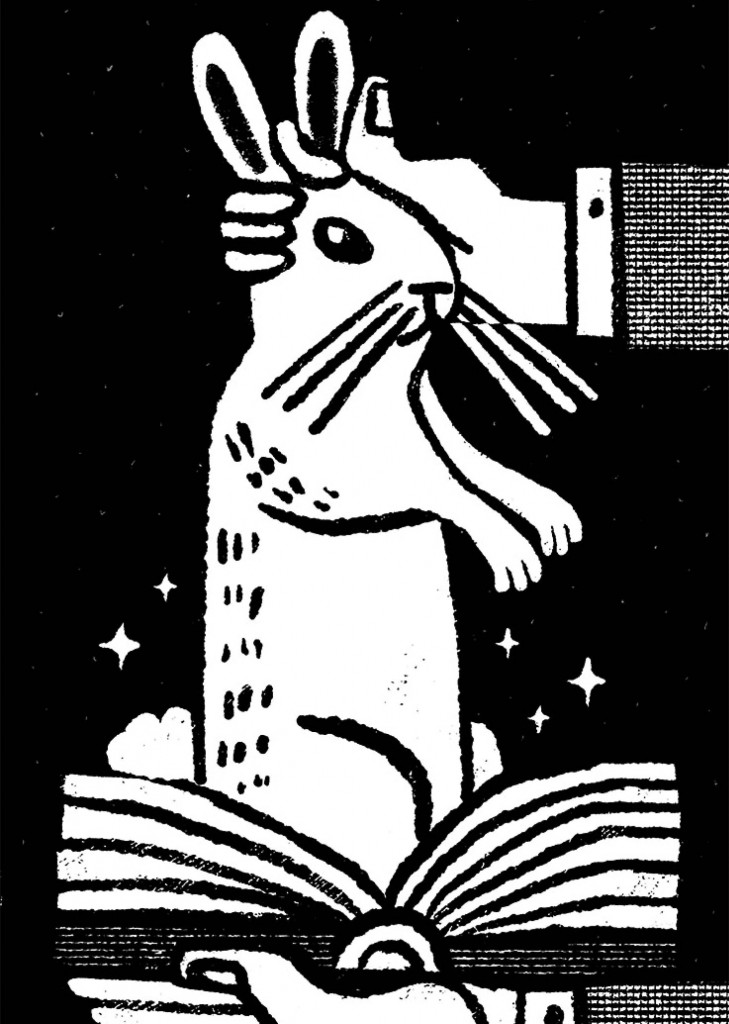 Tales full of tricks.
Image by A new collection from Alexander MacLeod

MacLeod has a magical way of compressing the essential features of a relationship into a few telling observations. In “Lagomorph,” David and his wife, Sarah, adopt a rabbit called Gunther because they think a pet would be good for their three children, “the picky, ungrateful people we had brought into the world.” When the rabbit develops an infection, the parents inevitably have to deal with it. Once Gunther recovers and regains his zest for executing binkies — those joyful leaps of rabbit happiness — he recedes into the background of family life. He lives on and on, rather like Sarah and David’s marriage, which continues through “rude endurance.” The spark has fizzled and the pair quarrel over insignificant matters, such as TV shows and overhead lights. “I think we just wore down,” David says. Even after Sarah moves away, Gunther endures, like some remainder of the relationship that was.

An alternative title for this collection could be “Near Misses,” as accidents happen with fair regularity. At one point, David saves Gunther from a close call with a snake. In another story, “Everything Underneath,” two young sisters, Becca and Kate, bounce in alternation on a trampoline. When Becca stops without warning, Kate catches the rebound and accidentally bites through her tongue. Off she goes to the ER with a dishtowel filled with ice cubes held to her face. Her sister preserves the severed tongue tip in a cup: she thinks the doctor might stitch it back on. “The Ninth Concession” begins with two boys teeter-tottering on an empty tobacco trailer. Their weight puts so much stress on the hitch pin that it pops out and pierces one of them in the arm. “A plug had been punched right through me, a perfect circle, and now I could see everything,” the injured boy says. “Even a white edge of bone.” Bea, a young woman in “The Dead Want,” is not so lucky. She flies off the back of an ATV into a tree and dies instantly. Her boyfriend, who was driving, walks away unharmed.

These narratives have a built‑in time-release mechanism. The meaning of events is never apparent right away. In “The Closing Date,” a couple arrive in a city to start new jobs and a new life. They check into a cheap motel while waiting for the purchase of their house to close. The room next to theirs is occupied by a plumber named Mark, who fixes the hot water in their bathroom and plays with their daughter, Lila. Afterwards, the couple learn that Mark is a serial killer and that he murdered a man on the night they were all staying at the Bide‑a‑While. “It took more than a year, almost two, before we started to understand what had happened,” the husband says, as he recalls the murderer giving his daughter high-fives and buying her a freezie. He imagines “the things we did or did not do” that night but arrives at no firm conclusions about the randomness of life.

In “The Entertainer,” several characters tell parts of a heartbreaking story about music, rivalry, ambition, and aging. Darcy, a young pianist, suffers a block while playing Scott Joplin’s famous tune during a concert at a seniors’ residence. Roxy, Darcy’s teacher, coaches him from the sidelines. Gladys Ferguson’s husband brings her to the performance in hopes that some profound distraction will “trip the familiar synapse and light the light” in the midst of her dementia. And, miraculously, it does. In its musical themes and its virtuosic technique, “The Entertainer” recalls Alice Munro’s “Dance of the Happy Shades” and Mavis Gallant’s “The Concert Party.” Structured like a fugue, right down to the stretto, it is an astonishing and moving piece of writing.

The short story is notoriously hard to define, yet most people agree on one point: it must be concise. An author has to limit the number of significant characters and show how their past lives bear on the present. Material must be compressed into a coherent design without sacrificing brevity. Every detail should be luminous with implication. Alexander MacLeod ticks all these boxes and others besides. When you finish reading Animal Person, you flip back through the stories and wonder at the way he managed to pull off so many tricks while leaving you unable to detect quite how he did it.

Allan Hepburn is the James McGill Professor of Twentieth-Century Literature at McGill University.