My eighty-nine-year-old mother is undertaking her own version of Swedish death cleaning, even though she’s been an inveterate thrower‑out of things as long as I can remember. There’s really not that much to get rid of. But she’s at it again, rummaging through drawers and fretting over the items that have accumulated in her not very crowded condo storage locker in southern Ontario. Her recent excavations unearthed a couple of drawings made by four-year-old me, a 1953 silver dollar that was a gift from her father to newly born me, and a handwritten document from her maternal grandmother to “all concerned in the Family.” It’s an odd contract of sorts, written in a kind of legalese that my great-grandmother must have picked up from somewhere. It reads as follows:

This letter to all concerned in the Family of the late John Gerrard Neale late of 402 St. Antoine St, Lachine, Que. All the Brass now in use, namely brass Trays, Candlesticks, etc. & especially the Fireplace Fixtures, as Fender and Fireirons, which are at present in the care of Mrs. Thos. Pape, Ada Neale, Daughter of the late J. G. Neale. They are to be regarded as Heir Looms. In the Event of the death of the said Mrs. Thos. Pape, the Brass to be returned to the children or relatives as Heirlooms in the Family & are definitely not to be sold or given away. Signed, my name Mrs. Christina Neale, widow of the late John G. Neale of Lachine. Witness my hand this day, 11th day of September 1945.

My mother eventually inherited a lot of this brass from her Aunt Ada. In addition to the fender and fire irons mentioned in my great-grandmother’s instructions, she has brass trays, a heavy brass floor lamp, a magnificent brass sculpture of the legendary racehorse Man o’ War, and a large vase made from a brass artillery shell. My childhood memories are punctuated by the smell of Brasso — those many Heir Looms, to use my great-grandmother’s insistent phrase, requiring frequent polishing.

The brass is all the product of the venerable Robert Mitchell Company brass works, established in Montreal in 1851 and still active in St‑Laurent. Its founder, a young Scottish immigrant, had arrived only three years earlier, penniless because a fire in the river steamer that carried him upriver from the port of Quebec City had burned through the hold in no time, destroying everything that the new settlers had brought with them. Ironically, it was another conflagration — the Great Fire of Montreal in July 1852, which destroyed more than 11,000 businesses and residences — that ensured the success of the fledgling Mitchell brass works, first located in a shed on Rue St‑Henri. In response to the two defining catastrophes of his still short life, Robert Mitchell designed an improved brass firehose coupling and nozzle, featured at the 1855 Paris Exhibition. They were still being sold across the country seventy years later. The extension of the Grand Trunk line between Montreal and Toronto offered further opportunities for expansion, and Mitchell moved into manufacturing brass fittings for railway cars. Mitchell products — sanitary fixtures, architectural bronze work, iron staircases, revolving doors — eventually found their way to every prestigious Canadian institution, from the Senate Chamber in Ottawa to the Banff Springs Hotel in Alberta.

My great-grandfather, John Gerrard Neale, worked at the Robert Mitchell Company for many years, and his position was clearly a source of pride for the family. It’s not altogether clear what he did there, but my mother remembers that he wore what she calls “office clothes.” These signalled what she describes as a “better class” of people than those on the paternal side of her family, all of them descended from carpenters, domestics, and grooms. John, on the other hand, apparently “came from money in England.” The United Kingdom’s 1881 census indicates that his father, my great-great-grandfather, was a “tobacconist and stationer,” putting the family, I guess, in the petit bourgeois echelon. Regardless, John and his younger brother were shipped off to Canada from Liverpool, apparently because they were “into something” their father disapproved of. 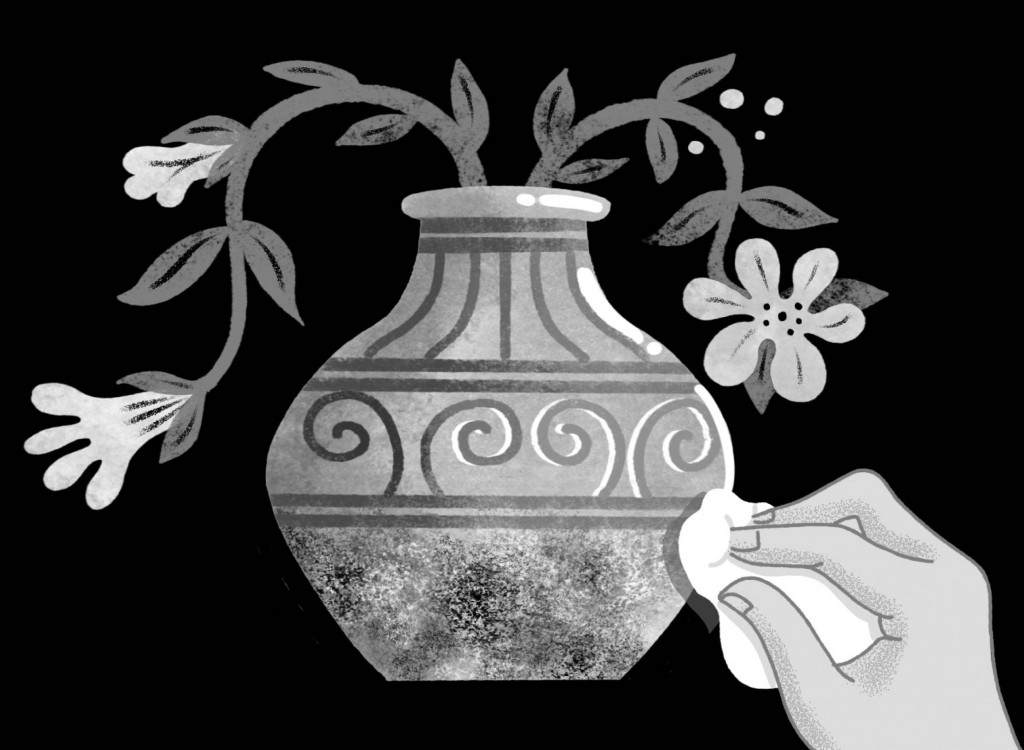 The passage of time works its effects impersonally.
Image by JAmie Bennett

My great-grandfather carried his own father’s social aspirations with him to the new country, acquiring a solid two-storey brick house in Lachine, only four blocks from the convent where he insisted that his Protestant daughters be educated. He wanted them to be ladies. His third daughter, Doris, my grandmother, foiled at least some of his ambitions by cutting classes and marrying a sometimes self-employed, but mostly unemployed, carpenter. No wonder her older sister Ada got the family brass, which, nonetheless, found its way to my mother sometime in the 1960s.

In one of our recent conversations about the brass, my mother — clearly willing to disregard her grandmother’s insistence that the antique pieces all be treated as Heir Looms in perpetuity — suggested that the heavy floor lamp might be sold for a good price. It was originally designed to hold candles, and the four lions’ feet on the base have holes in them so that the whole thing could be screwed to a wooden floor. When my great-grandparents had electricity installed in their home, the lamp was converted to accommodate light bulbs.

I didn’t have the heart to tell my mother that, some years earlier, she had pretty much sabotaged its value on the antiques market. A piece of the lamp had somehow broken off, and when my parents had it fixed, the local repairman suggested they have it coated with a sealer, probably polyurethane. This would preserve a bright, polished surface. Uh‑oh. It would also, of course, completely ruin the patina — that now much valued symbol of an artifact’s or work of art’s provenance and authenticity. Today, silver candlesticks must show traces of tarnish; wooden tables must have deepened in colour and perhaps accumulated a few dings. Alas, my mother’s brass floor lamp shines with a permanent and preternatural brightness that it never had before the repairman “improved” it.

It would never have occurred to my mother or her ancestors (a word she never uses) that any kind of tarnish or discoloration could be a good thing. On the contrary, respectability demanded that brass and silver be polished to a high sheen. It went without saying that furniture or doors with layers of varicoloured chipped paint should be repainted. Nowadays, of course, even the most culturally naive among us values the look of age and authenticity, whether genuine or not.

“It would never have occurred to my mother that any kind of tarnish or discoloration could be a good thing.”

The internet is replete with advice about how to add patina to almost anything: “Adding patina to silver with an egg.” “How to age brass using vinegar and salt.” “How to make your wood furniture look distressed.” Martha Stewart, the doyenne of all things domestic and a great popularizer of the desirability of patina, even has articles on how to add algae and moss and other signs of age to one’s terracotta garden pots. You can slather yogourt on the pot, she explains. You can fill it with a highly concentrated fertilizer solution for a few weeks. To make a new planter look as if it had been unearthed in an archeological dig, you can apply soil from your backyard. Of course, my mother would simply consider the result to be a dirty pot. The long-running television program Antiques Roadshow has been another great popularizer of the significance of patina, with its parade of disappointed hopefuls learning that their Tiffany lamp has declined in value from $50,000 to $10,000 because they once cleaned the bronze base.

But let’s assume that the patina on an object, on a collectible — a terracotta pot, a wooden table, a brass lamp — is real, an effect of the passage of time, the accumulation of dirt, various chemical reactions, natural weathering. The passage of time works its effects impersonally, without agency. What we don’t see when we focus on the patina of an object is labour and pride of labour: The labour of working at a forge or in a carpenter’s workshop. The labour of keeping a clean and well‑run house. The labour of preserving and repairing a useful object when objects were not so easily acquired or replaced. The word “heirloom” gestures to this accumulated effort, with “loom” meaning “tool” or “utensil.” An heirloom was something useful or necessary passed down through the family.

The word “patina” also evokes the work of a household. It comes from an Italian word with the same meaning as in English and, before that, from Latin, where it refers to a “broad shallow dish or pan” and the “prepared food contained in such a dish.” The Oxford English Dictionary conjectures that its current English and Italian meaning derives from the film that would form on such a copper pan or dish after prolonged use. But we have lost this old emphasis on use and entered into a commodification of the object. It is only when an heirloom leaves the family that it accrues the monetary value so celebrated by Antiques Roadshow and its many appraisers — and, may I add, by my mother, a child of the Depression. For her, things are marked in the first instance by their exchange value. Not long ago on the phone, for instance, I told her that my husband had finally located his treasured hockey card collection, which he feared he had lost in our recent move from Edmonton to Victoria. It consists of fifteen signed cards from many of the 1962–63 Toronto Maple Leafs, lovingly mounted in a photo album. He wrote to each of them — Johnny Bower, Red Kelly, Tim Horton, and the others — individually from a childhood sickbed. “You are my favourite Leaf,” he maintained faithlessly. “Please send me a signed card.” And they arrived, as if by magic, by return mail. “He could probably get a good price for them” was my mother’s response.

My mother has made a terrible and heartbreaking mistake in one way, by removing even the possibility that her brass floor lamp can now acquire patina. But in another way, she has been the honest keeper of a trust, maintaining the usefulness of a fixture that started its life in the age of the candle. My sisters will make sure all the brass stays in the family, as my great-grandmother stipulated seventy-seven years ago. But none of it will come to me, not least because my mother would consider it a terrible waste of money to ship something all the way across the country when another perfectly adequate child lives only a few kilometres away.

Jo-Ann Wallace is a professor emeritus in the Department of English and Film Studies at the University of Alberta.

Kudos for this knockout personal essay by Jo-Ann Wallace. Autobiography, social and cultural history, national history all effortlessly told. Stays with you bittersweetly.