When strangers in Montreal ask me what Edmonton is like, I often respond, “There’s lots of parking.” It’s the kind of potshot one can take only against one’s own hometown. But my answer is also rooted in architectural despair: Alberta’s capital is a place of urban sprawl and strip malls, shaped by decades-long zoning rules that required new developments to provide a minimum number of parking spaces. And though city council removed this policy in 2020 (blessings be upon them), Edmonton would be hard pressed to compete with Montreal’s gentle density and visual character. Quebec’s metropole features churches repurposed as performance spaces, street after street of balconied triplexes, and enough stained glass and crown moulding for us prairie people to dub it “European.” Indeed, you have to go quite far from the centre before suburbia kicks in and things start to look the same as they do almost everywhere else in North America.

Such architecture is, however, under threat across Quebec. This past May, developers destroyed the art deco complex Domaine-de-L’Estérel in a small town north of Montreal, despite its protected status in the eyes of the province. The newspaper of record, Le Devoir, runs story after story about heritage buildings set to be razed in favour of condominiums (and, God forbid, parking lots, which is the fate foreseen for the modernist city hall in Sept‑Îles). Indeed, close to 3,000 historic structures are demolished every year. These practices are the subject of Marie-Hélène Voyer’s L’habitude des ruines: Le sacre de l’oubli et de la laideur au Québec (The habit of ruins: The cult of forgetting and ugliness in Quebec). Through a combination of research and poetic description, Voyer provides an eloquent critique of the political, economic, and cultural factors that render such casual destruction possible.

Voyer begins by situating herself in Rimouski, where she teaches literature. The city of 50,000, about 300 kilometres east of Quebec City, should be beautiful, given its location on the widening St. Lawrence River and its founding in 1696. But it was devastated by a fire in 1950, and the powers that be have let much of its remaining patrimony decay. For Voyer, “the city is emblematic of the easygoing relationship that Quebeckers maintain with demolition.” She laments that the cathedral where her mother’s funeral took place sits empty, cordoned off by the wire fencing that is sadly familiar in many communities. In a province with the motto “Je me souviens,” Voyer asks how we may “keep track of these pieces of history, these lives, these memories, and these skill sets that we are burying.” 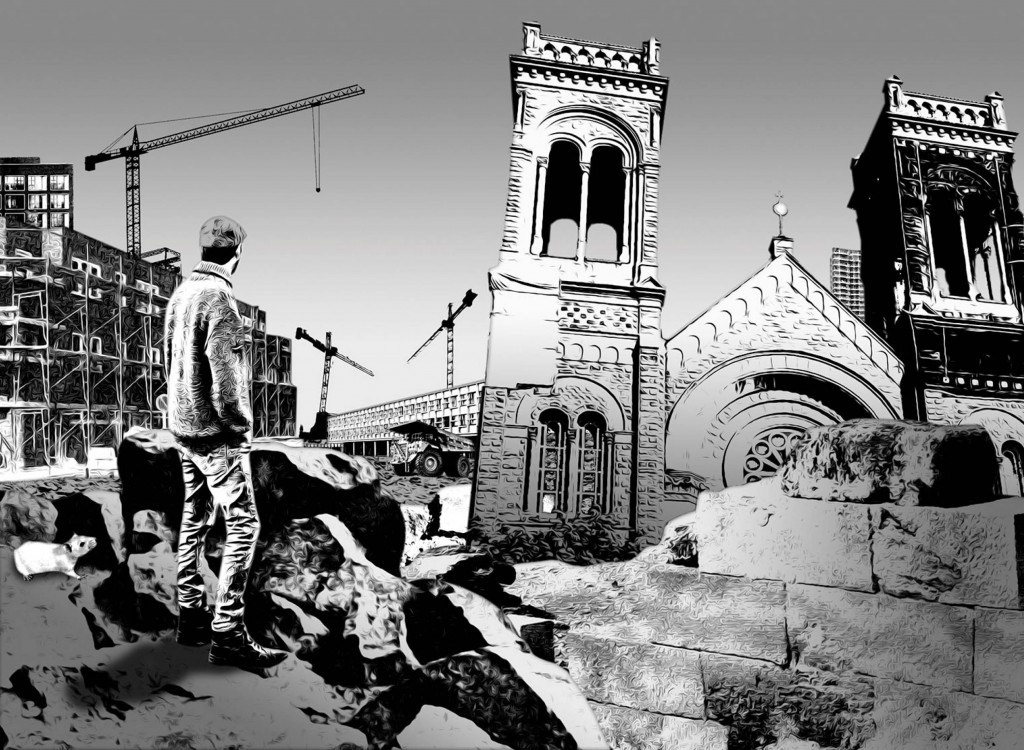 Re-evaluating what’s been built — and lost.
Image by pierre-paul pariseau

L’habitude des ruines is made up of short chapters that take on specific aspects of architectural malpractice, with interspersed photographs that contextualize the decay. One section attacks “facadism,” the tendency to retain or reconstruct the exterior of a building even as its interior is ripped out wholesale. Another examines faux villas in the Montreal suburbs that combine a pell‑mell of styles with few local references. A chapter on Quebec City is particularly revealing. Much of its picturesque centre was reconstructed in the 1960s to create an “image of the past destined to please tourists.” Decades later, the administration of Régis Labeaume, who served as mayor from 2007 to 2021, repeatedly allowed actual historical buildings to collapse.

There are some straightforward villains in these pages, embodied by flippant politicians and developers who leave their properties to deteriorate in order to justify razing them. Other enemies are more structural: the disappearance of artisans with the skills necessary to maintain older edifices, for example, and the tiny budgets of small municipalities that place renovation efforts out of reach. Then there is the complacency of a population that permits all of this to happen.

Voyer draws on both journalistic and academic sources to make her case. Kindred spirits include the columnist Jean-François Nadeau, who has long advocated for preservation, and the prolific Québécois scholar and writer Pierre Nepveu, whose 2004 essay collection Lecture des lieux (The reading of places) was a forerunner to L’habitude des ruines. Like Nepveu, Voyer is also a poet — something readers must keep in mind. She is less invested in hard data or policy recommendations than in capturing the subjective experience of places and their historical echoes. Her prose is polished and evocative even when she grapples with the banal. Thus, she describes the lightwells of her childhood shopping centre as “complex assemblages of glass and mirrors whose angles magnified the effects of the light on the islands of dusty fake trees that punctuated the shopping mall.” Of course, these installations were designed to look the same at all hours of the day, thereby preventing shoppers from noticing the hours that have passed.

With such attention to detail, Voyer puts herself “at the service of those humble places that whisper time rather than declaim it.” Much as environmentalists lament the focus on “charismatic megafauna” at the expense of smaller species, she critiques the monumentalism and the insecurities that prevent Quebeckers from appreciating what they have. Consider how the mayor of La Malbaie, Michel Couturier, justified the demolition of an eighty-year-old elementary school with the declaration “Aesthetically speaking, it’s not the Roman Colosseum.” As Voyer convincingly argues, “By taking nothing less than an emblem of the Roman empire as the benchmark for measuring the importance of architectural heritage,” such actors are effectively condemning their municipalities to the wrecking ball.

Voyer’s critique of small-town mayors could just as easily apply to my own condescension toward Edmonton, even if I am using Quebec as my point of comparison rather than Italy. Is the city where I was born really such a brutalist nightmare, or am I just not trying hard enough to appreciate brutalism, which was, after all, a consecrated style? The thoroughly charming 305 Lost Buildings of Canada, written by Alex Bozikovic and illustrated by Raymond Biesinger, suggests that I owe it a more detailed appraisal.

Biesinger and Bozikovic’s tour of Canada’s lost architecture spotlights at least one city in every province, alongside some smaller locations like Lethbridge, Alberta, and Sarnia, Ontario. The book’s main draw is its stylized imagery, black and white renderings of facades that manage to be detailed and minimalist at once. Each drawing is accompanied by a blurb that describes the history of the building, the reason for its destruction, and the current state of its former location. The collaborators acknowledge that “heritage preservation is a complicated field, and it’s never practical to hold onto every trace of the past.” Still, we could afford to pay more attention to the edifices around us. Like Voyer, Biesinger and Bozikovic call for cultivating a broad palate, as they include structures that are “easy to love, with craftsmanship and detail that anyone could appreciate,” as well as others that “speak a more subtle architectural language.”

Though not quite a coffee-table book, 305 Lost Buildings of Canada lends itself more to flipping through than to dedicated reading. I was predictably drawn to the sections on Montreal and, especially, Edmonton. In both cases, several of the selected buildings had been destroyed by fire rather than by greedy promoters. Yet one occasionally detects a critical edge in some of the descriptions. Edmonton’s Varscona Theatre, with its flashy 1940 marquee, was first “replaced by a bank whose architecture echoed that of the theatre,” only to be “demolished for a Shoppers Drug Mart.” The Duncan Block housed independent shops from 1896 to 2003 before it caught fire and a Starbucks took its place. And there is the story of the Tegler Building, a massive structure with “brick-and-stone Edwardian classical walls” that was controversially torn down in the 1970s by the Bank of Montreal.

While these two projects appear in broad sympathy with one another, it’s unclear what Voyer might make of 305 Lost Buildings of Canada, which is not nearly as relentless in its critique as she is. Indeed, Voyer’s hostility to outside influences sometimes appears excessive, as when she condemns the “home-made exoticism” of condos that evoke Miami or Scandinavia in their branding. (One wonders what kind of architecture would pass the Quebec purity test.) Elsewhere, she frames museum gift shops as exerting an “inexplicable and unhealthy attraction” because their highbrow knick-knacks encourage a consumerist approach to the past. But are retro postcards really such a problem?

Voyer could have offered more on preservation that works, whereby buildings are repurposed in ways that honour their history and keep them relevant to contemporary society. There is even an ideal case study buried in her book: the Cégep de Rimouski, where she teaches, is a converted seminary in which “the library, immense and luminous, spreads beneath the vaults of the old chapel, its walls pierced by immense windows in the arches that, depending on the time of year, allow us to admire in turn the river or its vast ice floes.” Rather than celebrate this adaptation, Voyer focuses on the fact that the college gradually sold off its oak and maple furniture in favour of pieces made from plywood. Such arguments are reminiscent of Theodor Adorno’s railings against jazz: more pretentious than insightful, more grumpy than attentive.

Yet Voyer does offer a compelling rebuttal to the undervaluation of what’s been built in this country. Especially outside Quebec, architecture plays a small role in a Canadian consciousness that tends to be dominated by images of the natural world. Maybe some people think of the CN Tower, Parliament Hill, or the Château Frontenac (predictably dismissed by Voyer as a “vaguely medieval hotel”). The jelly-bean row houses of St. John’s might also make the cut, alongside the odd lighthouse and prairie grain elevator. If we want to retain the material traces of our past, though, we need to admit that we have inherited many other structures that deserve protection.