Gordon Lish, who has edited the likes of Raymond Carver and Don DeLillo, has called Eugene Marten “one of the top three living male American writers,” while the jacket copy of Marten’s latest novel describes him as “an unheralded, singular master.” At least one of those appraisals is easily proven: five books in, and this author , who was born in Winnipeg but now lives in Cleveland, doesn’t even have a Wikipedia page.

Pure Life is about a washed‑up quarterback with a messed‑up brain, known to readers only as Nineteen (his jersey number). Fresh out of Alcoholics Anonymous, flat broke, and estranged from his family, with his memory full of gaps and his joints full of surgical screws, our hero packs his golf shirts and flies south in search of increasingly unorthodox treatments for “the grey noise in his head.” (The neurodegenerative disease chronic traumatic encephalopathy can be confirmed only by a post-mortem.)

The novel rushes through Nineteen’s early life via a choppy sequence of incidents. Marten writes in a clipped vernacular, contrasting plucky platitudes with blunt exposition to amplify the dissonance of the American mythos: “Coach tells his kids, ‘You must choose the pain of discipline or the pain of regret.’ His assistant nods. The oldest boy is twelve.” 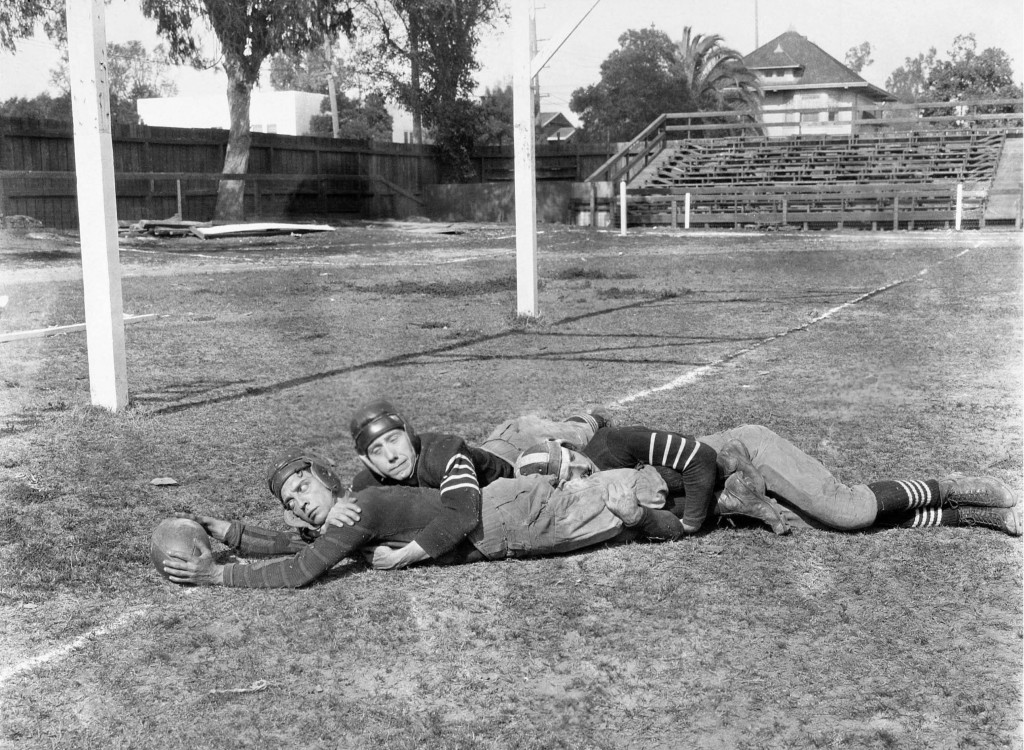 What comes after the final game?
Image by College, 1927; Alamy

In less than thirty pages, Nineteen overcomes his lack of natural athleticism through sheer determination, goes undrafted but makes the NFL out of training camp, leads his team to within a hair’s breadth of the conference championship, then marries the owner’s daughter. Single-minded yet accountable, polite, dependably boring, and blissfully ignorant of politics, this budding star is a walking, talking slice of white bread. So of course he gets injured at the height of his career and throws it all away.

Although he stops just shy of becoming the all-American anti-hero, Nineteen’s fall from grace is as consummate as Tom Brady’s rise: chronic insomnia and a bum shoulder; two fused vertebrae and thinning hair; a flask in the golf bag, along with blue pills and pink pills; and a string of bad business deals. After his divorce, the middle-aged has‑been lives in an empty farmhouse full of cases of unsold ale branded with the image of his younger self. Dashcam footage of his DUI arrest goes viral. Drunk one night, with one hand on the laptop trackpad and the other stroking himself, he recognizes his estranged daughter in a porn video, then attempts suicide. End of the opening chapter.

It’s fitting that the book’s first act reads like the coda to a tragic sports saga, because Pure Life is about what comes after the end — after the end of heroes and dynasties and globalization, after the triumph of capitalism and the end of history. Nineteen stares at a blank TV screen in a brain fog, a cipher for our collective oblivion: “There were no eras now, just a continually unfolding and transmuting moment, one decade blurring into the next. Streaming.”

Finally sober, he hears about a doctor in Roatan, an island off the coast of Honduras, who offers experimental stem cell treatments. Nineteen has already tried serotonin, hypnosis, hyperbaric chambers, acupuncture, cannabis, and fish oil. He has started experiencing blackouts. Roatan is his Hail Mary. He heads there with his girlfriend, an “Independent Sales Director” in a cosmetics pyramid scheme whom he met in AA. When the stem cell option falls through, the novel shifts from Friday Night Lights to Heart of Darkness as Nineteen ventures into the Honduran jungle in pursuit of a murky shamanistic cure.

Marten has been likened to DeLillo in the past, and the comparisons are not unwarranted. His nimble pacing and sparse phrasing are well suited to the tension of fourth-quarter football (it’s a shame the book doesn’t feature more of the game). He channels the emptiness and desecration at the heart of post-industrial America, its cheesy stadiums and indistinguishable airport lounges, its roadside embankments with ads painted directly on the rock face. Nineteen is a quintessentially twenty-first-century character. Before his downfall, the protagonist is just a vessel; his desires are not his. He simply does what quarterbacks do: he visits terminally ill children and goes to Bible study. Winning is important, sure, but what comes after the final game? The player is killed and resurrected every week on live television. The strongest, fastest men in America tear him apart. A medical pit crew reassembles him with bolts, staples, metal plates, and ligaments from the dead. Millions of citizens from an unravelling empire focus the sum of their faith and frustrations on his throwing arm. Professional football is a machine that converts lifespan into glory. When the glory stops, Nineteen tries to take his own life. When that fails, he wants to take his life back.

Tragically, it’s not clear what he would do with the rest of his days even if he did recover fully. His dependability and selflessness end at the sidelines. He rarely thinks of his family. Football has always been his only true love, and, brain damaged or not, he will never play again. As a result, it’s hard to care what happens to the man as he trudges through the rainforest, fever-dreaming about cannibals and dodging narcos. Marten’s writing transforms deftly with the change of scenery — no doubt he could write an engrossing jungle thriller — but the stakes are too low. Ultimately, the verdant flora, CIA agents, and gunfire of the third act feel as grafted on as our hero’s hair plugs.

Bardia Sinaee is a poet in Toronto.