This Is How We Love

It began on Friday, January 17, 2020, as a record-breaking “Snowmageddon” blasted Newfoundland and Labrador with 130-kilometre-an-hour winds and buried St. John’s under seventy-six centimetres of heavy flakes — on top of the metre already piled on the ground. Thousands of people were trapped inside their homes with no electricity as they waited for the armed forces to help dig them out. Others snowboarded along major streets. The city was shut down for a week.

This is the setting for Lisa Moore’s fifth novel, in which a young man, Xavier, is left fighting for his life after being beaten and stabbed as the superstorm hits the province. His parents, Jules and Joe, are away on vacation at the time. His mother manages to get a last-minute flight home, but his father finds himself stuck in limbo when the blizzard halts further air traffic. Jules must deal with Xavier — and Snowmageddon — on her own.

In many ways, This Is How We Love covers ground Moore has previously explored. Her 2005 debut, Alligator, and Caught, from 2013, both probe the state of crime in Newfoundland through an ensemble cast of characters. In February, from 2009, a family confronts the loss of a husband and father after the Ocean Ranger, an offshore drilling unit, sinks in the Atlantic. That’s not to say Moore is merely retracing her steps here. Using her careful prose like a trowel, she digs deeper into this rich thematic soil. 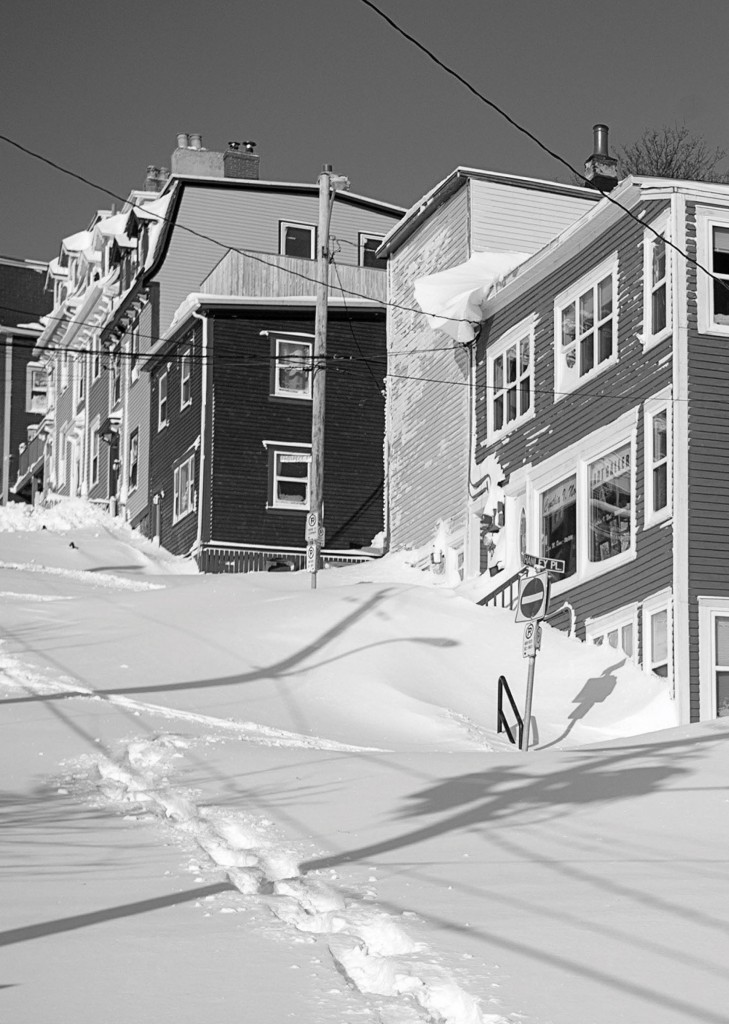 Trekking across the snowbound city.
Image by The Canadian Press

Although the blurb for This Is How We Love claims that Jules “must fight her way through the shuttered streets of St. John’s to reach the hospital where Xavier lies unconscious,” it is a little misleading. Her trek across the city forms only a small part of the plot. Rather, much of the book revolves around events from her son’s early years and the fated relationships that have led him to this point with the unyielding momentum of a train wreck.

As the drama of Xavier’s life and death struggle hurtles the story forward, Moore reflects on the nature of connection: the bonds between parents and children and the ties of young lovers, as well as the darker, more painful manifestations of neglect and abuse. Although the novel centres on Jules, whose account is delivered in the first person, the perspective pivots to Xavier, his childhood friend Trinity, and later Trinity’s volatile boyfriend, Brad Murphy, known as Murph. There is no predictable baton passing; Jules may get a few chapters in a row, then Trinity or Xavier will appear after an extended silence. There is also a mini-subplot where Xavier gets a dirt bike for his birthday, which jumps into the story unpredictably.

The roaming narrative shuns a chronological order, instead mimicking the frantic leaps of Jules’s anxious mind — an agitation further heightened as the weather rages outside. Moore leaves it up to readers to connect the dots of causality, focusing on the emotional resonances between the vignettes. She used a similar cubist plot structure in Alligator, but with her latest title, each story fragment feels more purposeful and urgent.

When Jules arrives at the hospital to find her son in critical care, she considers an earlier time: “Before the storm of the century. Before we were cursed. What might get us through.” The curse refers to an incident from long ago when, during a water balloon fight with Xavier, Trinity hit an eccentric local figure known as “the Woman in the Yellow Hat.” After the balloon burst on her shoulder, the old lady spat on the sidewalk, pointed her finger, and declared, “You’ll burn for this.” From that moment, Jules maps a constellation of interlinked events. All the while, the narrative manages to surprise readers without relying on ham-fisted twists.

If there is a star-crossed character, it is Trinity, a foster child who was raised by Jules’s neighbour. Although she had “never seen anything like actual love between Mary and Trinity,” Jules remarks, “there was something more durable and remote, a sense of inviolate duty toward each other.” Nonetheless, the young woman struggles with the ache of growing up without her mother, which leaves her vulnerable to being manipulated by local drug dealers and eventually propels her into Murph’s dangerous orbit.

Despite drifting apart from their former closeness — back when “they really were one person”— Xavier and Trinity continue to look out for each other. In high school, when Xavier is unfairly accused of vandalism, Trinity distracts the police when they show up at a basketball game to apprehend him. Later, when she faces her own medical emergency, he identifies himself as her brother to accompany her in the ambulance. And when he is stabbed, it’s Trinity who helps him.

Over the years, Xavier wrestles with whether to entangle himself in his old friend’s many conflicts. “There were people had a hold on you,” he says, “and who knows how they got that hold.” Theirs is a fraught allegiance, but what matters, Moore seems to say, is fidelity, compassion, and, above all, showing up in times of need. “If you failed to love someone, you might be scathing toward them or hilarious at their expense,” Jules reflects on family and relationships near the end. “Even if they were distasteful to you, even then, you were expected to attempt something that loosely resembled love.”

When it comes to narrative, cohesion trumps accuracy, and so, when Jules states that she is “going to try to stick to the truth,” she qualifies it by saying, “but why is always equal parts truth and speculation.” What follows isn’t necessarily a straight account, because facts aren’t enough. Stories are needed to fill in the gaps. And the other perspectives throughout the novel are perhaps products of the narrator’s desire to impose order on the chaos of her son’s attack — to find her way through the maelstrom, just as she weaves through the snowed‑in streets.

Ultimately, Moore analyzes the fundamental connection between the ways we love and the stories we hold, tell, and repeat. Powerful bonds can grow during moments of reflection, merging instances of intimacy and duty. To take full account of loved ones, however, is no small task. Jules may have a noncommittal relationship with the truth, but she isn’t naive. Weaving together a tapestry of one’s many connections means stitching in people’s foibles too. This Is How We Love thoughtfully recreates these processes on the page without succumbing to sentimentality.