The Platform Economy and the Smart City: Technology and the Transformation of Urban Policy

Admittedly, I’ve been a bit of a sucker for many of the smart-city ideas that I’ve heard over the years. Putting sensors in public garbage cans, so cities can be more efficient about scheduling pickups? Cool! Lampposts on streets being used for car-charging or cellphone transmission points? Ooh, multi-tasking! Open-data collection that allows anyone to map the neighbourhoods making the most calls about coyote sightings or parking gripes? I like! Computer modelling programs that tell officials where crowds are likely to form at major public events, so they can plan how to contain or disperse them? That idea, used during the 2010 Winter Olympics, seems . . . well, smart.

But I’ve also been unnerved by the smart-city hype that has flooded my inbox for the past ten years: the invitations to international conferences focused on all the new tech, along with the glowing reports of how this or that thing, produced by this or that company, is revolutionizing life for the better. There’s always such a huge corporate presence attached to them, and the solutions so often seem to be predicated on buying some shiny gadget or complex software that is exclusive to a brand. The partners for the 2021 Smart City Expo World Congress in Barcelona, for example, included Huawei, Microsoft, Cisco, and Deloitte. IBM regularly turns up at the ubiquitous smart-city events. And there have been some dismal failures, especially vaunted new products that promise to unclog local bureaucracies and don’t.

So I looked forward to a considered examination of the smart-city phenomenon in two new books: Dream States: Smart Cities, Technology, and the Pursuit of Urban Utopias, by the legendary cities observer and senior editor at Spacing magazine John Lorinc; and The Platform Economy and the Smart City: Technology and the Transformation of Urban Policy, edited by the Syracuse University professor Austin Zwick and the Canadian researcher Zachary Spicer. 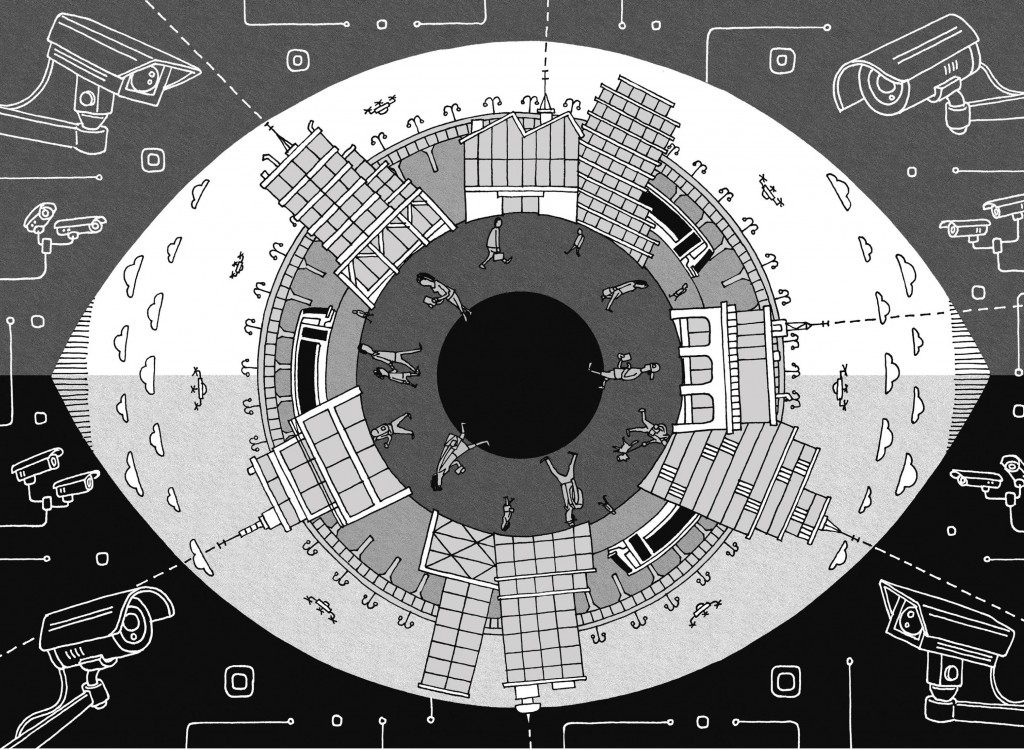 The eye looks out of no face.
Image by Tom Chitty

These two titles agree that cities, by definition, have come to be what they are because of technology. They’ve always been “smart” places, in a way. People migrated to them to work in the factories and mills, especially during the Industrial Revolution. (They also left farms because technology made many of their agricultural jobs obsolete.) People have increasingly been able to live and thrive in relatively compact spaces because of innovations: elevators, complex sewer and water systems, streetcars, concrete and rebar, street paving, bridges, electric lighting. And, you could say, the modern city is essentially a giant communications hub.

Lorinc dedicates almost a quarter of his book to detailing the various advances that have made our modern urban life possible, with one chapter on water and sewers alone. (Be still, my sewage-system-loving heart.) Those who can’t get enough of this kind of stuff will both enjoy his summary and discover a treasure trove of lesser-known studies and papers. To wit: “In his 2011 account of the early days of the gaslight industry, Leslie Tomory observes that the inspiration for [Frederick] Winsor’s most important innovation came from the network of sub-surface mains.” Yes, years of reading pleasure await.

Besides the actual changes that technology has produced, Lorinc’s far-ranging opening chapters include references to utopian or science-fiction-style urbanism: the imagined worlds of thinkers who wanted to “eradicate the ills of the city while optimizing its economic and social prospects.” (Hence the book’s title, Dream States.) He takes us through the efforts of Haussmann, Le Corbusier, and Ebenezer Howard (Garden City), along with Frank Lloyd Wright (Broadacre City), the New Urbanists Peter Calthorpe and Andres Duany, and even H. G. Wells.

“The genius of cities is often how messily creative they are.”

It’s only after a hundred pages that we get into Lorinc’s dissection of the current hype. First off, it’s a marketing device: “The tech industry seized on the ‘smart city’ label as a means of developing and selling new generations of scalable digital systems that claim to be capable of tackling complex urban problems, from climate change to security to mobility.” A second thorn in the rose? Many smart-city inventions involve data collection or surveillance that violates personal privacy. And don’t forget that data collection can be inherently skewed. It’s not neutral.

Lorinc’s book is both dauntingly broad — the entire history of technology and its influence on cities everywhere — and surprisingly narrow. It gives a lot of attention to the Sidewalk Labs venture in Toronto, for example. Readers outside Hogtown will appreciate the book’s accessible and thought-provoking historical survey of the affair. But its preoccupation with Alphabet/Google’s aborted project, which was obviously a Very Big Deal and a weird carnival ride for many Torontonians, can feel a bit remote.

Apart from Sidewalk Labs and its problems, Lorinc’s main emphasis in Dream States is on the negatives of many recent initiatives. He especially focuses on the unchecked surveillance that results from all kinds of data collection. Consider San Diego’s introduction of a $30-million streetlight system in 2015, which included digital sensors, fish-eye-lens cameras, and other surveillance technologies atop lampposts. The program ended in 2020, because of the controversy over the kind of information it was gathering, how accurate it was, and who was using it. (The police, as it turned out.)

Lorinc does include a few positive examples, citing Tartu, Estonia, and Barcelona, Spain, as places where governments have ensured strong public oversight. But mostly a reader has to do some hunting for any benefits of these new technologies, like the way wastewater testing has been usefully employed to monitor levels of COVID‑19 or how residents of Hamburg, Germany, can now book all things transportation — from bikes to ride-shares — through a single app.

The dozen essays that make up The Platform Economy and the Smart City also focus heavily on the potential pitfalls of tech and data collection and not as much on reliable examples of where they have produced benefits. Yes, being alert to the intended and unintended negative consequences of any invention or system is essential. So is being alert to what is genuinely an opportunity to improve urban life. If there are benefits to be gained from these new tools, we should know exactly what they are.

One of the book’s few references to positive outcomes also cites Barcelona as “a pioneering city that aims to integrate public participation, societal concerns, and returns on public investment” into its digital efforts. But we’re left wondering how, exactly, the Catalonian capital has used smart-city initiatives and how things turned out differently there because of its better public policy.

The first two-thirds of the collection — eight essays across close to 200 pages — is dedicated to the extraordinary difficulties officials have faced as they have scrambled at warp speed (for a bureaucracy) to deal with system-disrupting platforms like Uber and Airbnb. Anyone who feels there hasn’t been enough coverage in the local media about how these ride-sharing and vacation-rental platforms have circumvented, ignored, or bent typical municipal regulations can wallow in a lot of detail here, with everything from Uber’s entrance into Kingston, Ontario, to Toronto’s often feeble efforts to regulate short-term rentals between 2016 and 2018.

The collection’s final big section focuses on aspects of the smart-city phenomenon not related to those platforms. One of the four essays examines, as Lorinc does extensively, the Sidewalk Labs project on Toronto’s waterfront. The others scan the main possible perils of smart cities in general, echoing some of Lorinc’s points and adding a few more.

Both books end with similar warnings. Lorinc: “ ‘Smart’ may be necessary, but it will never be sufficient.” Spicer and Zwick: “As governments transition from the platform economy to the smart city, what kind of city will we choose?”

As with many, many new technologies — from the codex to the radio to the internet — we’re essentially warned: Yes, it holds a lot of promise. But there are a lot of hidden dangers, and we’re all going to have to be vigilant. Don’t forget, though, that the genius of cities is often how messily creative they are — something, these authors remind us, that smart urban tech hasn’t come close to figuring out yet.