How the World Really Works: The Science behind How We Got Here and Where We’re Going

I don’t know how a cellphone works, I have little conception of how the internet operates, I have no blessed idea why my roadster ignites when I turn the key, and I am completely befuddled by the notion of driverless cars. Hell, I don’t even understand how a hand-held can opener works. I consider it one of the principal miracles of modern life how the pull tab on a container of tuna fish is fastened to the top of the can, and while we are at it: How is that movable plastic sealing implement attached to the opening of a zip‑lock bag?

All of which is to say I’m the target audience of Vaclav Smil’s How the World Really Works: The Science behind How We Got Here and Where We’re Going, which actually doesn’t answer any of the technical questions that keep me up at night. No matter. The protean University of Manitoba scientist and analyst is a warrior against what he calls “comprehension deficit,” and he is our tour guide to a complicated world.

To revise an axiom René Descartes proffered in 1637: We comprehend, therefore we are. In that spirit, Smil has assembled a primer on the state of things — not so much a guide for the perplexed as an owner’s manual for the earth’s inhabitants. Think of it as the science-literature equivalent of those Laura Secord chocolate samplers that your parents used to place in the parlour: a little of this, a little of that, rich and satisfying, all the more so if consumed with leisure and discipline. For in these pages is an examination of how concrete is made, an explanation of why oil tankers grew in size after the Second World War, a meditation on the phenomenon of machines making other machines, and an aside on why grazing animals produce three times as much dung as animals kept in confinement. Who knew? (Not me. Probably not you, either.) 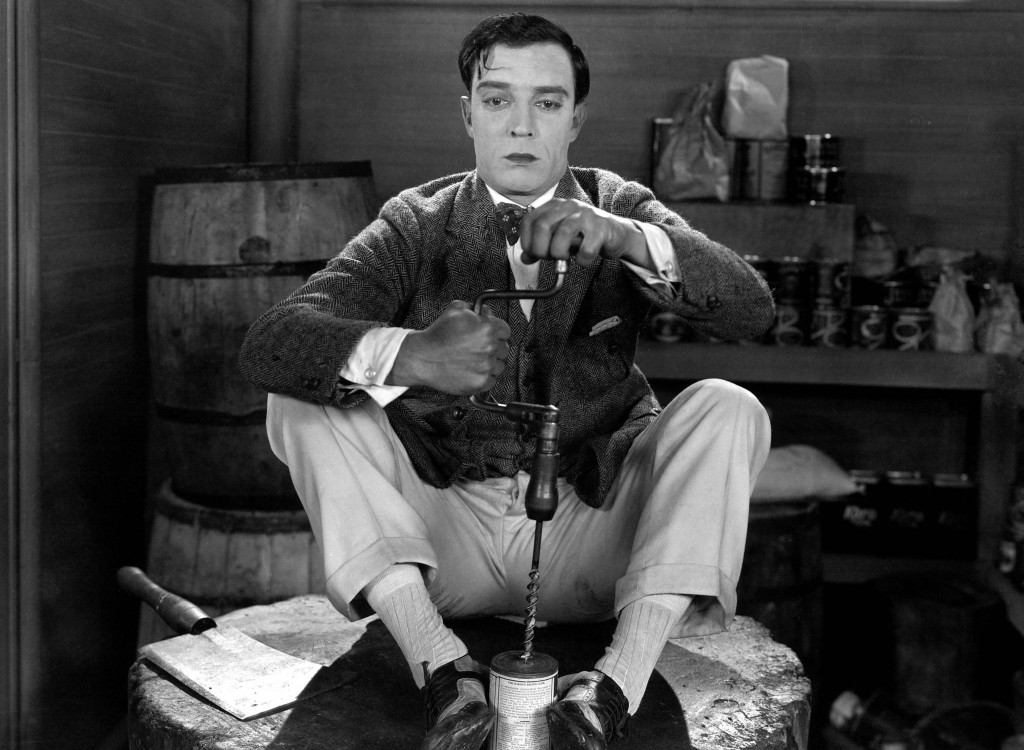 Perhaps especially for those who don’t know how the can opener works.
Image by The Navigator, 1924; Everett Collection; Alamy

The guiding principle here is both unavoidable and unassailable. In a book that is not comprehensive but that is intended to aid comprehension, Smil argues that we can’t make the world better if we don’t understand how it really works. (Hence the title.) He has assembled a volume that is decidedly not a twenty-first-century version of Denis Diderot and Jean Le Rond d’Alembert’s Encyclopédie, that eighteenth-century doorstop that pulled together all manner of knowledge. (Earlier generations evidently were satisfied with the Bible.) Even though things are a lot less complicated than they seem, today’s reality is still far more complex than that of the Enlightenment. The original encyclopedia had no garage-door opener to contemplate, no refrigerator ice-machine malfunction to explain. Its readers had no Wi‑Fi to log into, no password to remember to access their Aeroplan miles, no Siri to guide their daily passage. We have all of that — plus climate change.

In Smil’s project to render the incomprehensible understandable, consider me a test case. I manoeuvred out of high school physics, got a C+ in a university geology course so easy that even the football team considered it “rocks for jocks,” and barely earned a D on my Introduction to Astronomy mid-term. Even now, I don’t know how to share my screen on Zoom; I can barely turn on the television in my own den.

So it was a relief when I breezed through Smil’s first two paragraphs. Halfway through the third, I felt a bit bogged down. After a graceful recovery, I vaulted through three more pages, stumbling only when I encountered the word “kinetic,” which I should have learned in grade 11 but didn’t. The phrase “animate prime movers” stopped me cold. Bravely, I pressed on — my anxiety dissipating, my confidence growing — and before long I came to the conviction that this book would reward my efforts, even though I still don’t know what “gigajoule” means.

Along the way, this reluctant scholar learned that “an abundance of useful energy underlies and explains” all of civilization’s progress; that in the early nineteenth century, ten minutes’ human labour was required to produce a kilogram of wheat but that today it takes less than two seconds; that when it comes to consuming wild fish, sardines have the lowest carbon footprint; and that Canada’s longest runway, a 4.27-kilometre strip at the Calgary International Airport, “required more than 85,000 cubic meters of concrete and 16,000 tons of reinforcing steel.” Good to know, all of it.

But by far the most important notion that Smil shares is this: The world has four indispensable materials — or “pillars of modern civilization.” These are cement, steel, ammonia, and plastics. He tells us that “the mass-scale production of all of them depends heavily on the combustion of fossil fuels,” and he explains that their worldwide production requires about one-sixth of the globe’s primary energy supply and produces a quarter of all carbon dioxide emissions.

Smil offers an illuminating meditation on ammonia, “the gas that feeds the world.” Here’s what he means: because of its use in fertilizer, “it would be impossible to feed at least 40 percent and up to 50 percent of today’s nearly 8 billion people” without it. And he includes plenty on steel (this was especially satisfying to me, as a resident of Pittsburgh, as it surely will be to those in Hamilton). For instance: “Modern steels are made from cast iron by reducing its high carbon content to 0.08–2.1 percent by weight.”

Famously, in Mike Nichols’s 1967 film The Graduate, Mr. McGuire, played by Walter Brooke, says to Benjamin Braddock, played by young Dustin Hoffman: “There’s a great future in plastics. Think about it. Will you think about it?” Smil certainly has, and he reminds us that “modern life now begins (in maternity wards) and ends (in intensive care units) surrounded by plastic items.” Think about it.

“There actually is an index entry for manure, which is something of a recurring theme.”

A Czech by birth, Smil excels in a distinctly Canadian pursuit: distilling. Here is an example of how he extracts the essence of a complex idea, in this case involving climate change, with a simple declarative sentence: “We are concerned about too much of something without which we could not be alive: the greenhouse effect.”

The irony — and the value of this volume — is that in bringing to our attention simple means of examining contemporary life, Smil underlines how tangled that life is. Another example: “Purely organic farming would require most of us to abandon cities, resettle villages, dismantle central animal feeding operations, and bring all animals back to farms to use them for labor and as sources of manure.” (There actually is an index entry for manure, which is something of a recurring theme. How many books on your shelf can claim that?)

Our tour d’horizon eventually brings us to the ways the economy has been shaped and reshaped. There may be no better example than the deindustrialization of North America, which has led Canada —“the country with per capita forest resources greater than in any other affluent nation”— to import toothpicks and toilet paper from China. Two pages later, Smil pairs that stunning fact with the statement that “we may have seen the peak of globalization, and its ebb may last not just for years but for decades to come.” Good thing Canadians from coast to coast to coast started hoarding toilet paper during the early days of the pandemic. But how’s your supply of toothpicks?

In the background of much of this picture, as it is in so many serious discussions of our future, is climate change, and here Smil has some sensible, if perhaps unwelcome, commentary about various ideas swirling around Ottawa, Washington, and Beijing. “These magic prescriptions give no explanation for how the four material pillars of modern civilization”— you remember them: cement, steel, ammonia, and plastics —“will be produced solely with renewable electricity, nor do they convincingly explain how flying, shipping, and trucking (to which we owe our modern economic globalization) could become 80 percent carbon-free by 2030; they merely assert that it could be so.”

Yes, he tells us, small steps can be made. We could cut food waste in half, for one thing, move away from SUVs, be more efficient in construction and energy generation. “But we cannot instantly change the course of a complex system consisting of more than 10 billion tons of fossil carbon and converting energies at a rate of more than 17 terawatts, just because somebody decides that the global consumption curve will suddenly reverse its centuries-long ascent and go immediately into a sustained and relatively fast decline.”

This is not beach reading (I actually tried, starting the first chapter on the shores of Lake Michigan). Yet it is worthwhile, perhaps essential reading. You almost certainly will not remember that cement is produced by heating ground limestone to at least 1,450 degrees Celsius nor recall that Franco’s Spain consumed less than twelve kilograms of meat per capita annually. But you very likely will not forget this:

Being agnostic about the distant future means being honest: we have to admit the limits of our understanding, approach all planetary challenges with humility, and recognize that advances, setbacks, and failures will all continue to be a part of our evolution and that there can be no assurance of (however defined) ultimate success, no arrival at any singularity — but, as long as we use our accumulated understanding with determination and perseverance, there will also not be an early end of days.

Read it and reap — here are the lessons about how the world really works.

David Marks Shribman won the Pulitzer Prize for beat reporting in 1995. He teaches in the Max Bell School of Public Policy at McGill University.