My Grandfather’s Knife: Hidden Stories from the Second World War

Years ago, when I was studying in Heidelberg, Germany, a friend of mine found a broken violin in his basement and offered it to me. The tailpiece was missing, and the back plate had separated from the body. The instrument wasn’t valuable, but I was fascinated by its scroll — a stylized lion’s head with watchful eyes — and the rope purfling that shone through the layers of dust. If restored, how would it sound? What could I learn about it?

I thought of that old violin as I read the first chapter of Joseph Pearson’s My Grandfather’s Knife. The historian opens with his early childhood impressions of the weapon, which hung on a wall in the basement of his grandparents’ house in Edmonton. Pearson’s object is more menacing than mine, but the ornamentation was similarly evocative: an eagle-head pommel glaring with an ever-vigilant eye; a glinting hilt, carved with laurels and engraved with a swastika. As a boy, Pearson knew to “distrust” the Nazi bayonet; it was only years later, once he had researched the knife’s production and circulation, that his fear vanished.

Pearson’s previous monograph, Berlin, explored the scenes and settings of a city’s history. My Grandfather’s Knife has a similar dramatic quality, but the focus here is on the objects of the action: those things that can be held and wielded to various ends. Pearson recognizes the power of even small items, and he is concerned about their vulnerability to “opportunistic narratives,” along with our tendency to fetishize what we don’t understand. He finds confirmation in an aphorism from Epictetus: “The moment we start to give the inanimate a special aura or imbued importance, we become slaves.” That statement explains Pearson’s childhood fear of his old knife, but it goes against the grain of the book somewhat: after all, in order to use an object as a tool to understand the past, we presume it has value. 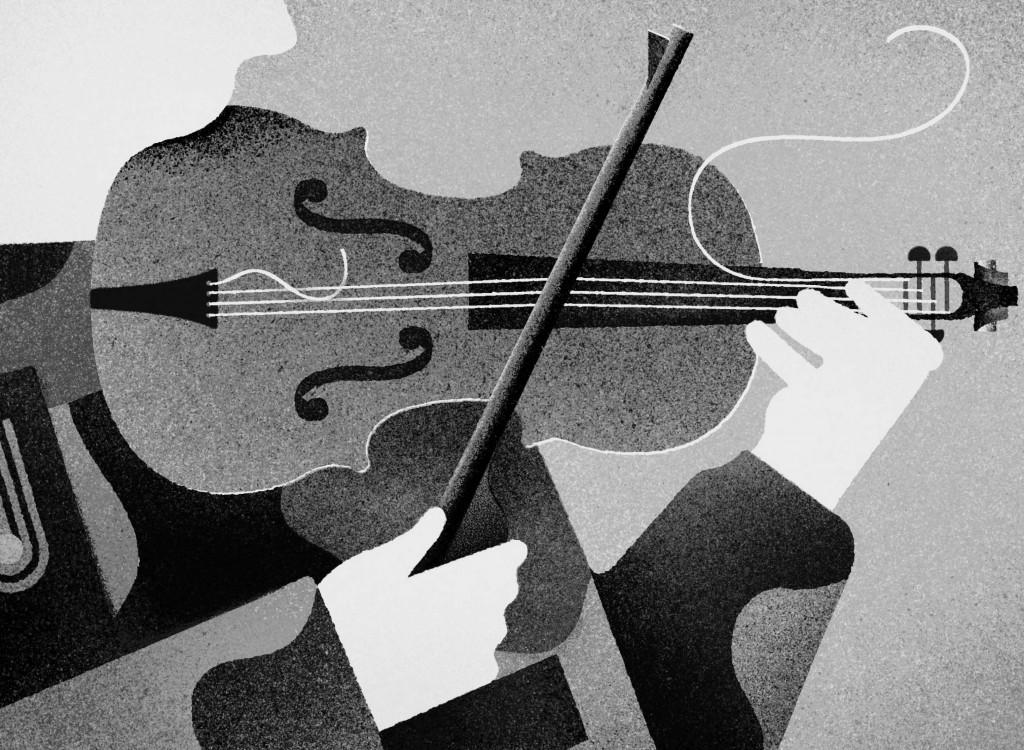 Listening with a different awareness.
Image by Karsten Petrat

In practice, Pearson does imbue objects with importance, a starting point that makes for absorbing stories of investigation. He is quick, for instance, to inspect a war diary from an obscure German serving in France, which others had previously dismissed as holding “no interest.” Pearson is convinced that such objects can add nuance to a history, and in fact the diary does reveal detail and context left out by official documents. He discovers that the soldier was a young man in love, and very likely a deserter. Elsewhere, a simple cotton pouch sparks a discussion about memory, restitution, and the fragility of knowledge transmission.

Pearson’s “object history of memory” is at its most compelling in his fourth chapter, “A String Instrument.” He begins by interviewing Erich Hartmann, a double bassist. Before his death two years ago, Hartmann was the last surviving member of the Berlin Philharmonic during the Nazi period. He acquired his double bass in the early 1940s, when many of the instruments used by the orchestra had been confiscated or taken as plunder. Pearson suspected the double bass had been, too, but the search goes cold, and we never learn all the details of its provenance.

When Pearson turns his attention to an instrument played by Hans Bastiaan, a friend of Hartmann’s, the investigation leaps unexpectedly into the present. The 1761 Guadagnini violin had indeed been obtained through Goebbels’s procurement program and is now owned by the German state. Under the country’s restitution laws, someone could have claimed the violin, but no one has. This raises a question: What to do with unclaimed Nazi plunder? It could be housed in a museum, but a violin needs to be played if the wood is to maintain its resonance. For that reason, and to promote new talent, the German Democratic Republic decided to lend the violin and other unclaimed instruments to young musicians for fixed terms. Unified Germany continued the program under the direction of the Foundation for Musical Life.

When you know the violin you’re hearing — or playing — was ripped from the hands of another human being, you hear the sound with a different awareness. Maybe that leads to a deeper respect for lives lost. Then the music can be an act of commemoration. Unfortunately, the Foundation for Musical Life website says nothing about “provenance gaps.”

My Grandfather’s Knife repeatedly contrasts such silences with the hidden eloquence of objects. When Pearson asks Hartmann whether his fellow musicians spoke of politics during the war, the double bassist says, “No, we didn’t at all. We had to play.” Everyday tasks left no time for talk. That’s where the knife, the pouch, the diary, even recipes come in — if we let them. “Each object’s biography,” Pearson writes, “tells us what the respective society fears or values.” What is it, then, that our society fears and values? Why hide an instrument’s history?

I entered the luthier’s low-lit workshop off the Hauptstrasse, and there it was: the old violin, gleaming with fresh varnish. Herr Kohl told me it was a decent student model made around 1910. The label inside — Joann Paul Schorn, Salzburg — was fake, but the sound was rich. As he played it for me, I shuddered and wondered when it had last reverberated that way. Decades ago? In any case, it had survived for over a century, through two world wars and reunification. A week later, it would make it through a chancy transatlantic flight to Canada. All of that, I think, imbues this object with importance.