Water Always Wins: Thriving in an Age of Drought and Deluge

In the mid-nineteenth century, the settlers who travelled west to California’s Central Valley quickly discovered that they had arrived at a place with annual floods from winter rains and spring snowmelt. Some years were more sodden than others. Nonetheless, the determined newcomers cut down trees, planted crops, built houses, and hoped for the best. After all, there was a frenzied rush for gold going on nearby, and the railways were coming. Everyone would get rich.

Attitudes should have shifted in early 1862, when the Sacramento and American Rivers crested over their banks after weeks of rain. A tremendous flood covered the Central Valley, and the city of Sacramento, the state’s capital, found itself under three metres of water. The new governor, Leland Stanford, had to travel to his inauguration by rowboat and return to his mansion through a second-storey window.

But no one took the hint; no one retreated to higher ground so that water could do what it always wants to do. Instead, the state embarked on a decades-long effort to confine the rivers around Sacramento to narrow channels. It was an epic fight against nature — a radical replumbing of the area that culminated in the 1960s with the construction of the California Aqueduct, a huge collection of dams, pumping stations, and canals designed to bring water from the north to the arid south. Among other things, this massive diversion of water allowed for the creation of a vast agricultural industry — one that’s worth some $38 billion and that supplies both the United States and the world with all kinds of fruits and vegetables (about a tenth of California’s produce comes to Canada). 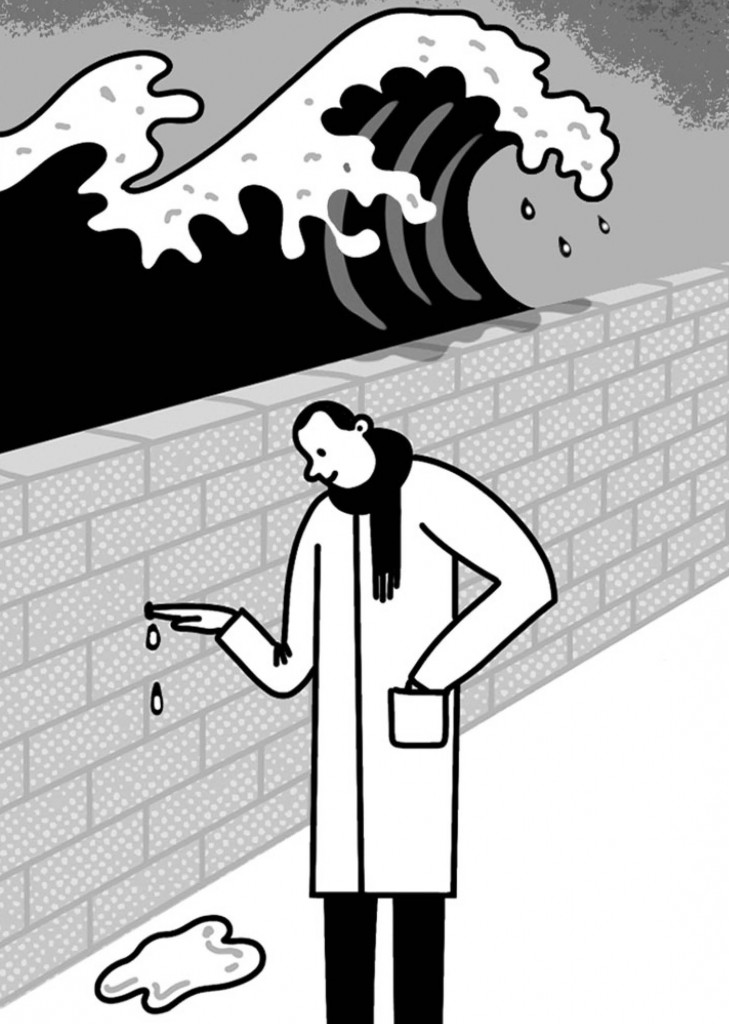 Time to abandon some old solutions?
Image by Jamie Bennett

The award-winning journalist Erica Gies believes “this epic fight” with the Central Valley represents “arguably the apex of water-engineering hubris.” In Water Always Wins, she outlines the complex ways the planet has dealt with water for millions of years, and she catalogues how humans have ignored that complexity when it has stood in the way of development. For centuries, we have buried brooks and creeks that were inconvenient. We’ve drained wetlands and lakes, straightened rivers to make them more amenable to shipping, built colossal dams to create reservoirs, and blocked off flood plains to claim more farmland. But water has something in store for us, writes Gies, who divides her time between San Francisco and Victoria. “If water were a category in the game rock, paper, scissors,” she writes, “water would beat them all every time.”

Humans, Gies argues, have forgotten that “water’s true nature is to flex with the rhythms of the earth, expanding and retreating in an eternal dance upon the land.” Generations of schoolchildren have learned the basic steps of that dance: standing water evaporates into the air and comes back down as rain or snow, feeding rivers, lakes, and plains and replenishing aquifers. But too often adults, believing their needs are paramount, have cut in.

Water Always Wins is a deeply unsettling book, because Gies is undoubtedly right that our hubris will have consequences. Recent headlines about severe droughts and equally severe flooding — including in places like Newfoundland — make it obvious the planet is in distress. So what is to be done? Gies argues for a philosophy of “slow water.” In other words, we should let it hang around like an indolent teenager. That means restoring wetlands and allowing flood plains to exist, regardless of their inconvenience.

What does that mean in an industrialized world that is hooked on growth, though? We are unlikely to welcome the return of seasonal flooding in eastern Iowa or to demolish the Hoover Dam on the Colorado River. How do we bring back the 90 percent of the wetlands that have been lost in the United Kingdom? That buried bridge over the long-gone Garrison Creek in Toronto’s Trinity-Bellwoods Park is unlikely to see the light of day again. And my neighbours won’t want to sacrifice their parking spaces by pulling up the cobblestones in their front yards, even if that would help keep drizzle from going straight to the sewer pipes.

The complication is that many of the actions that got us into this position have also improved countless lives. Irrigation in the Central Valley has put nutritious food within the reach of millions of people. Re-engineering flood plains on the Great Plains has similarly led to increased agricultural production. Burying rivers — from Taddle Creek in Toronto to the River Fleet in London — was once necessary to deal with sewage and other threats to public health.

The first rehabilitative step, according to Gies, is to abandon some technological solutions of the past while embracing nature’s ingenuity. She examines various projects — from Iraq and India to Kenya and Peru — where slow-water enthusiasts are doing just that. The largest of these is in China, which for forty years was hell-bent on modernization. Existing cities sprawled and new ones were built as flood plains and farmland were paved, forests were cut down, and rivers were forced between levees. Then a metre and a half of rain fell on Beijing in July 2012, killing seventy-nine people and causing $2 billion in damage. The inundation caught the central government’s attention. Since then, a so-called Sponge City initiative pushed by Xi Jinping has taken root in thirty cities. In each, water-loving plants along canals and rivers are reducing the possibility of flooding and retaining 70 percent of precipitation where it falls. Concrete channels have been ripped up, and streams that were straightened have been allowed to meander once more. They’re letting water be water.

Gies also describes much simpler projects, including one that involves beavers in Devon, England. There, in a relatively remote district, two of the industrious rodents were imported from Europe more than a decade ago. They and their offspring have had a profound impact by doing what they do best: digging canals and building dams to create pools of deeper water, so they can search over wider areas for food without threat from land-based predators. Local wetlands have increased twentyfold.

Water Always Wins may be unnerving, but it also shows how, with the help of such projects, we can lean on nature, while promoting biodiversity, capturing carbon, and reducing the risk of flooding. Indeed, Canada, with a beaver population estimated to be at least six million, stands a chance of allowing the wet stuff to win on terms we all can live with.