Good Mom on Paper: Writers on Creativity and Motherhood

Several years ago, thanks in equal measure to a stroke of good luck and a healthy dose of deliberate manoeuvring, I found myself in possession of a once-in-a-lifetime literary opportunity: a week-long writers’ retreat on a remote island smack dab in the centre of Lake Erie, with my favourite author on the face of the earth and the queen of CanLit herself, Margaret Atwood.

I’d applied not long but also a lifetime before — before I became a mother, before I got pregnant, before having a baby was anything but a distant possibility. Now things were different. I was a new mom to eleven-month-old Maggie, named for her mother’s favourite writer, no less, and I was still breastfeeding and co-sleeping and already plagued by the brutal affliction of “mom guilt.” For weeks, I wavered about going. I knew I could, but I wasn’t convinced I should, for a hundred legitimate and ridiculous reasons I won’t revisit here. I remember a sense of whiplash: elation at the sudden strange notion of freedom followed immediately by crushing shame. What kind of mother would I be to just leave, cruelly taking my daughter’s preferred and primary food source with me? My choice was such a cliché: The baby’s needs or mine? Stay or go? Margaret . . . or Margaret ?

But this story really isn’t about me, nor is Good Mom on Paper: Writers on Creativity and Motherhood. Except that it is about me and about anyone out there teetering on a tightrope between self and other, family and work, personal aspirations and the realities of life. “This is a book born of frustration,” the collection aptly begins. 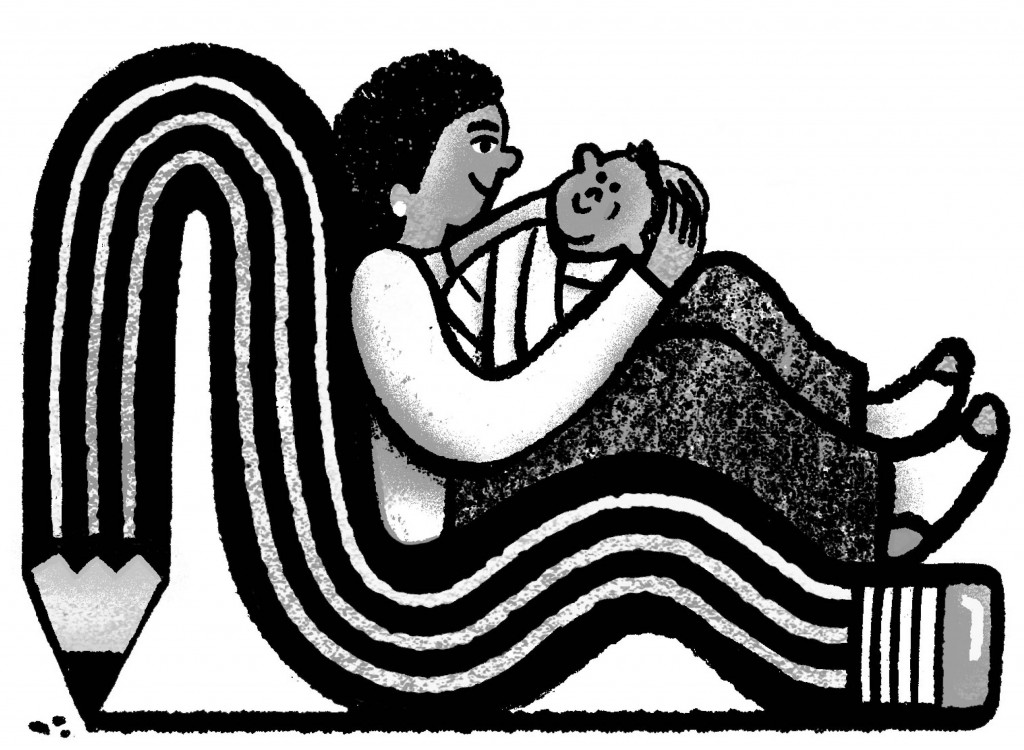 Let’s pencil in the time.
Image by Sandi Falconer

Before embarking on their collaborative project, the editors, Stacey May Fowles and Jen Sookfong Lee, both writers and mothers to young children, spent hours in conversation about the never-ending, often seemingly impossible struggle to balance creativity and motherhood. But if you, like me, clench your jaw every time you hear the phrase “work-life balance,” know that Good Mom on Paper doesn’t rehash that familiar oxymoron. “This is not a book about ‘having it all’ or being a ‘mom boss,’ ” they explain. Instead, it’s a collection of “varied reflections on how challenging, beautiful, confusing, and messy it can be to raise good people while also being good to ourselves.”

Fowles and Lee commissioned twenty essays on writing, or the lack thereof, alongside motherhood. Among well-known, well-published women of letters like the novelist Alison Pick and the late Stó:lō thinker Lee Maracle are newer voices plucked from journalism, academia, and stand-up comedy. Some tell of packed rooms on international book tours; for others, Good Mom on Paper is their first published piece. Moms here are single and married and divorced. Their children are biological, adopted, disabled, and even, in S. Lesley Buxton’s gut-wrenching piece, deceased.

Despite myriad differences, however, the struggle between motherhood and creativity is a constant. “I try to write before the sun rises, get the words out before my kids wake up, or work for an hour or two after I put them to bed,” the essayist Nikkya Hargrove tells us. Kellee Ngan, a short story writer, looks for “a lull between meetings or laundry cycles.” Erin Wunker, a professor of Canadian literature, is lyrical: “I wrote in hours snatched from the margins of my life.” And the poet Meaghan Strimas is deadpan: “Those aspirations sat in a glass jar on the shelf, right beside the Baby Mum-Mums and creamed green beans.”

Although there’s comfort in solidarity, there’s also a sense of sadness, frustration, and fury that builds and churns in me as Good Mom on Paper unfolds. I think of countless known, unknown, and would-be authors and their literary works that never materialized, all because of the same commonplace problem with the same simple solution (it’s child care, and preferably universal). “In fact, when you become a mother who makes creative work,” declare Fowles and Lee, “it becomes clear whom our systems are built for, and whom they are built to exclude.”

There is an Atlantic article from 2013 that haunts me to this day. Its bleak headline: “The Secret to Being Both a Successful Writer and a Mother: Have Just One Kid.” In the banner atop, next to Susan Sontag, Joan Didion, and Alice Walker, was my soon-to-be mentor (or BFF?) Margaret Atwood. But, much to my chagrin, the article contained no maternal insights from her.

Instead, Walker provided the heart of the piece. “They should have children,” the Pulitzer winner famously said when asked if women artists should reproduce, “but only one. Because with one you can move. With more than one you’re a sitting duck.” I remember ruminating, dwelling, googling “sitting duck,” and promptly falling down the wiki hole on (selfless, devoted, admirable) mother ducks. The more eggs she lays, I learned to my absolute horror, the shorter a hen’s lifespan.

Walker pops up in Good Mom on Paper, along with other famous wordsmiths who have managed to strike that rare balance between motherhood and authorial success. Throughout the book they drop inspirational tidbits like Zoloft pick-me-ups. “Toni Morrison, single mother of two boys, snuck in 4:00 a.m. writing sessions to produce The Bluest Eye,” reports the journalist Rachel Giese. The novelist and comedian Jennifer Whiteford notes that Barbara Kingsolver “wrote her first novel sitting in a closet so she didn’t wake her sleeping children.” Wunker considers Sylvia Plath, who described writing in “that still, blue, almost eternal hour before cockcrow, before the baby’s cry.”

If I just worked more and slept less, perhaps my creativity, too, would flourish? But at what cost? Could I become one of those rare women artists who dodge Pick’s unanswerable question of “whether to say yes to writing or to mothering”? If I had had Good Mom on Paper in hand and mind a few years ago, perhaps my options to stay or to go wouldn’t have felt so mutually exclusive.

“If I just worked more and slept less, perhaps my creativity, too, would flourish? But at what cost?”

Probably because I’m so sick of this debate playing out in my own head, I find myself especially drawn to the essayists with experiences that differ widely from my own. Giese, the author of the award-winning Boys: What It Means to Become a Man, beautifully describes the complexities of adoption while diving into the sexist history of the “childbirth-creativity metaphor.” Putting together a book and giving birth are really nothing like each other at all, she says, though that hasn’t stopped generations of male authors from conflating the two. In a letter to his wife, James Joyce described one of his works as “the child which I have carried for years and years in the womb of the imagination as you carried in your womb the children you love.” A century later, the analogy returns every time someone obnoxiously posts “Happy Book Birthday!” on social media.

Good Mom on Paper manages to find humour in these mundane annoyances, and, as with parenting, the comic relief is rare but well worth waiting for. Whiteford’s wit sparkles in her hilarious essay about the definitely non-hilarious topic of infertility. “Dog Rescue Romance Novels and Other Survival Tools” details the hours she spends in clinic waiting rooms, learning to love cheesy romance novels, including one in which “the main character in the book gets pregnant. Accidentally. I know.”

And then there’s Heather O’Neill, who swoops in near the book’s end to prove why she’s the reigning champion of Canadian short stories. Making the art look easy breezy as usual, “Lite-Brite Times Square” is O’Neill’s tale of being a twenty-year-old single mother desperate to escape her fate as a third-generation welfare case. “I would like to study to be a writer,” she tells her social worker. “Oh, no, no,” he says, handing her a list of realistic jobs. Her adventures in proving him wrong include a priceless memory of her young daughter distracting a CBC producer so O’Neill could sneak into an office and print her manuscript for free. The draft would become the celebrated Lullabies for Little Criminals, and if O’Neill can make such a literary miracle come true, surely there’s hope for all of us.

I think it was hope, sprinkled with a dash of hypothetical guilt, that ultimately brought me to the middle of Lake Erie. I imagined my daughter, who already loves books as much as I do, studying literature in a distant future. Years from now, I could tell her that I once had the chance to write alongside an icon but turned it down, all because of her. Or I could tell her that I did go to Pelee Island with Margaret Atwood, that it was absolutely amazing, and that I’m probably a better mother for it, on paper or otherwise.

Rosemary Counter is a writer, journalist and perfect mom in Toronto.