Villain, Vermin, Icon, Kin: Wolves and the Making of Canada

Two centuries ago, wolves were among the world’s most widely distributed mammals and roamed almost the whole of North America. The United States alone had somewhere between 250,000 and two million. Today a mere 18,000 or so reside in the land of liberty — about two-thirds of them in Alaska. In Canada, with the largest wolf population of any country, only around 60,000 are left. This number has stabilized in recent years, but questions remain: Why were wolves targeted for extermination in the first place, and how do we account for their contemporary reappraisal? The so-called wolf lady Stephanie Rutherford, who teaches in the School of the Environment at Trent University, in Peterborough, Ontario, seeks answers in Villain, Vermin, Icon, Kin.

As its title would suggest, this book — which took Rutherford a decade to complete — argues that since Europeans first arrived in the Americas, wolves have been variously imagined as evil, irksome, and almost sacred. The author keeps a relatively narrow geographic focus — no Romulus and Remus or Brothers Grimm here — and much of her work is more conceptual than zoological or historical: Rutherford uses cultural attitudes toward a keystone predator, including depictions of it in fiction, as a springboard for theorizing how humans and non-human animals are “tied together in knots of power.” To put it another way, by tracing Canadians’ relationship with wolves, she elaborates on our evolving relationship to fauna of all stripes — and to the idea of nationhood itself.

Rutherford anchors her ambitious thesis in the philosopher Michel Foucault’s concept of “biopolitics,” a mode of power employed by modern settler-colonial states like Canada. Through biopolitical power, such states seek to regulate health and longevity, but they allow only specific forms of “productive” life to flourish. While the concept of biopolitics is almost ubiquitous in academic circles, Rutherford’s take is somewhat unusual. She argues that anthropocentrism — precluding non-human life from the laws that govern and safeguard humanity — lies at the centre of the modern state. On the factory farm, for example, cattle are subject to exceptional violence; they are, as the Italian thinker Giorgio Agamben has written, “killed but not sacrificed.” Wolves too have been made to live on uneven terms with a humanity that does not recognize their “creaturely sentience,” as others have put it. 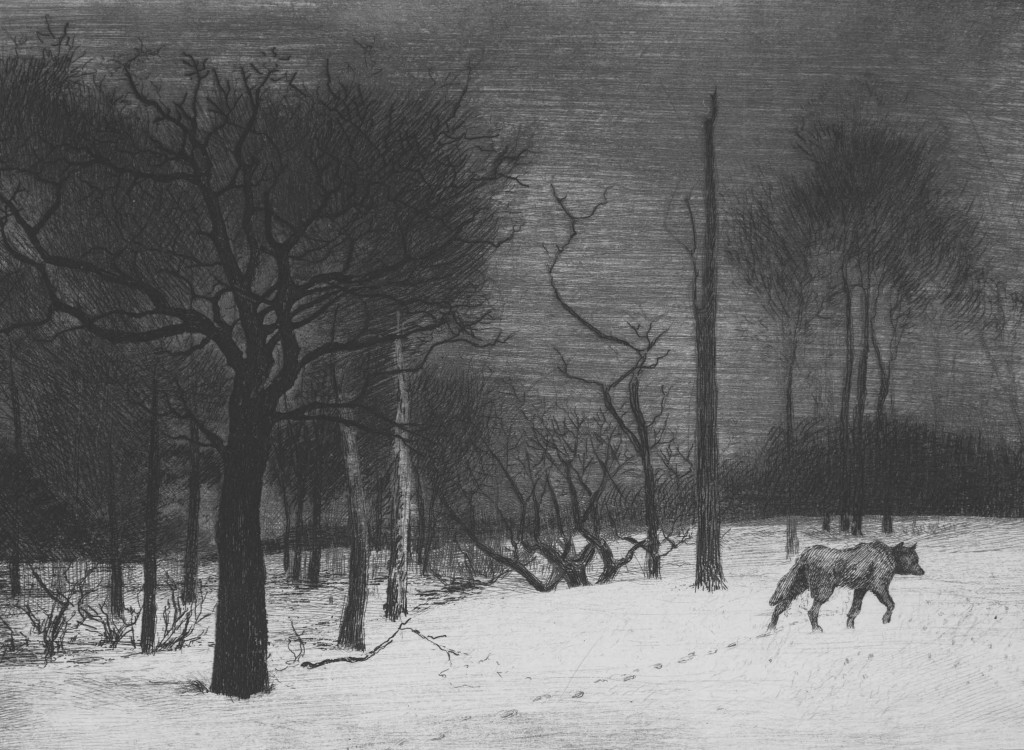 The imaginative landscape of a malleable symbol.
Image by Félix Bracquemond, 1864; The Metropolitan Museum of Art

Rutherford advocates for certain Indigenous ways of knowing as a means of disrupting the status quo. By giving greater weight to the forms of knowledge practised by many Haudenosaunee, Ojibwe, and Lekwungen communities, among others, we can imagine alternatives for the wolves and other species that are caught within the network of biopolitical power — as well as alternative conceptions of belonging. Such a change is essential if we are indeed hurtling toward an irreversible environmental catastrophe. Citing the journalist Elizabeth Kolbert, the paleontologist Niles Eldredge, and the Guardian’s Damian Carrington, Rutherford notes that we are facing the “sixth extinction,” a human-made “biological annihilation” set to exterminate a quarter of the planet’s species. Through the story of the wolf, she describes how we have arrived on this self-destructive path — and offers suggestions for getting ourselves off it.

From about the fifteenth century to Confederation, many “wild” animals were cast as a threat to an emerging nation. European settlers read their “unproductiveness” as tantamount to the failure of the “civilizing” mission, and wolves, which they considered remarkably elusive and predatory, were especially denigrated. Widespread fear of the large canine, Rutherford suggests, operated as a cipher for broader paranoia about the wilderness — an unforgiving no man’s land that would consume newcomers and their growing settlements without remorse.

Depictions of wolves from this early period are often complex, even contradictory. On the one hand, these were yellow-bellied beasts. In Lady Mary and Her Nurse, for instance, Catharine Parr Traill described the wolf as a “great coward” that attacked only men who were “alone and unarmed.” On the other hand, these were street-smart stalkers; trappers of the period, like George Cartwright, in Labrador, noted that the cunning creatures frequently robbed them of their bait. Other writers, like Susanna Moodie (Traill’s better-known sister), went so far as to suggest wolves were unsportsmanlike; in Roughing It in the Bush, Moodie described a pack of “black devils” chasing down and slaughtering a lone deer. The colonial wolf was at once barbarous, opportunistic, and spineless, a flexible metaphor for the most despicable human qualities.

The wolf was also a malleable symbol in other ways. Following Confederation, fear of the animal shifted to something more along the lines of disgust. Less a physical threat, it was now an economic liability — more vermin than villain. Soon government-sponsored efforts, such as the bounty system, bureaucratized culling practices. The first wolf bounties were set in Upper and Lower Canada in 1793, but it was in the late nineteenth and the twentieth centuries that the system became a significant means for farmers to supplement their incomes; at $15 a head, the wolf moved from a discommodity to a commodity. In 1928 alone, the Ontario government paid out $91,297, which equates to over 6,000 dead wolves, wolf pups, and coyotes. And that accounts only for those pelts that were presented for remuneration.

“The colonial wolf was a flexible metaphor for the most despicable human qualities.”

As the bounty system — much less effective than its proponents would have liked — was gradually repealed in the 1960s, the wolf as a cultural figure was slowly recuperated, its image shifting again, now from vermin to icon. Writers, including Charles G. D. Roberts, Ernest Thompson Seton, and Farley Mowat, played a significant role in this cultural transformation. Rutherford’s analysis of Mowat is particularly intriguing. Although she concedes that his best-known book, Never Cry Wolf, about his time in the Subarctic, contributed to mainstream acceptance of the animals, she maintains that he presented them as merely “virtuous in human terms.” Readers of the 1963 work were encouraged to identify with them not in all of their complexity but rather as “large and fluffy dogs” whose sole purpose was to teach us how to be good people. By anthropomorphizing his subject, Mowat sidelined its fundamental alterity — and this “epistemic violence” erased the non-human he claimed to champion. As the philosopher Martin Heidegger might have said, Mowat committed the sin of “enframing,” or seeing in nature the human everywhere, all the time.

Biologists and conservationists played a similarly ambiguous role in the reimagining of wolves. While their efforts provided an intellectual framework for considering the animals as critical members of ecosystems rather than as disposable scoundrels, they also brought increased intrusion into wolves’ lives. Invasive tactics — like examining their kills and fitting them with radio collars — meant relief “from annihilation, but not from management.” Scientists succeeded in protecting wild populations, Rutherford explains, but their interventions were still predicated on a separation of nature and culture.

In her book’s final section, Rutherford considers what she hopes will be the wolf’s next movement, from icon to kin. Today, attempts to silence “uncivilization” are widely repudiated; past attempts to exterminate these creatures have led to an understanding of our destructive relationship to the natural world more broadly. Yet even this contemporary “devotion” celebrates an “idealized wild” that reinforces old settler-colonial notions of “wildness”— only now the space is to be praised instead of tamed. Even our new-found allegiance to animals becomes a “dividing and distancing practice.”

To solve this problem, Rutherford invites Canadians to “unfix our conceptual rigidity,” which necessitates a disruption of the “colonial logics” from which both our rejection and our adoration of the wolf have emerged. Unlike most Western scholars, she argues, any number of Indigenous thinkers understand the “personhood” of animals, including wolves. That is to say, they approach them as active members of society that shape humans as much as humans shape them. All Canadians may reimagine their relationship to animals — and to Canada itself — by embracing a “decolonial politics of nationhood” that is designed and led by Indigenous ways of knowing. In doing so, we might discover a different understanding of what it means to live ethically with nature, wolfish or otherwise. And this shift may offer a way out of the sixth extinction.

Indeed, Rutherford insists that we must not succumb to despair and accept the inevitability of climate catastrophe. In a literary turn of phrase, she suggests we need a peripeteia — a sudden change — to snap us out of our ennui, to interrupt the systems that have brought us to this place. Unfortunately, the specifics of this transformation remain murky. She insists on embracing “epistemologies” and “ontologies” that offer “radical possibility for humans and non-humans alike,” but her focus on the theoretical comes at the expense of the practical. Airy-fairy adjectives, such as “generative,” pepper her argument like sweet but nutritionless sprinkles; readers may be enticed, but many will be left unfulfilled.

Even absent the particulars, however, Rutherford’s broader argument remains compelling: anthropocentric attitudes lie at the heart of modern biopolitical power, and the persistence of wolves in the face of our attempts to exterminate them exposes the fiction that we can control nature itself. It’s an arrogance that brings to mind Margaret Atwood’s poem “Progressive Insanities of a Pioneer,” from 1968, in which the character of the title belittles the wilderness as “the absence of order” rather than recognizing it for what it really is: “an ordered absence.” Villain, Vermin, Icon, Kin highlights the danger of this type of thinking and, if nothing else, makes the case that something must be done to change it, lest we march so far down our current path of environmental destruction that, as one maligned wolf once put it, all of our houses get blown down.

Thanks for this thoughtful (and beautifully written) appraisal of my book Villain, Vermin, Icon, Kin. And thanks for the reminder to be a bit more grounded in the practicalities of environmental justice. It’s a really important critique.