How to Argue with a Racist: What Our Genes Do (and Don’t) Say about Human Difference

Altered Inheritance: CRISPR and the Ethics of Human Genome Editing

Since at least the 1605 publication of Francis Bacon’s The Advancement of Learning, scientific curiosity has been regarded as a positive emotion. But there are obvious downsides. While “curiosity-driven research” or “pure science” may sound abstract and detached from the so-called real world, it tends to find application down the road. It’s what led to the atomic bomb, grotesque wartime medical experiments, and, closer to home, horrific nutritional tests in residential schools.

Whether positively or negatively directed, curiosity is inextricably bound up in the social and even the political. The field of genetics is a clear case in point. In the 1960s and 1970s, as struggles for racial equality became headline news, some scientists claimed that those of African descent were innately less intelligent and more prone to anti-social behaviour than those of European descent. Progressive social and public policy would therefore have little effect, the theory went, since the differences are primarily hard-wired.

Many of these researchers were associated with the racist Pioneer Fund. Prominent among them was the psychologist Richard Lynn, who wore his politics on his sleeve. “What is called for here is not genocide, the killing off of the population of incompetent cultures,” he wrote in a widely cited book review from 1974. “But we do need to think realistically in terms of the ‘phasing out’ of such peoples.” 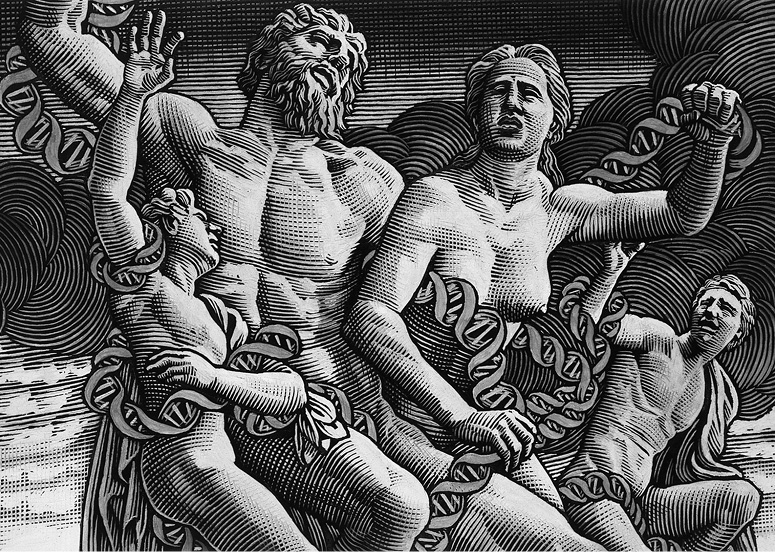 The shackles of bad science.
Image by Bill Sanderson, The family of Laocoon entwined in coils of DNA, 1990; Wellcome Collection

Bigots continue to employ shoddy science and outright charlatanism to support their racial views, and it’s this ongoing mischief that the geneticist and science writer Adam Rutherford counters with How to Argue with a Racist. His title is somewhat misleading: Rutherford is not out to bring racists around. In fact, he approvingly quotes Jonathan Swift: “Reasoning will never make a Man correct an ill Opinion, which by Reasoning he never acquired.” Instead, Rutherford offers a general audience a compelling scientific refutation of racist claims that still enjoy wide circulation.

That refutation starts with a relatively new appreciation for the extraordinary complexity of genetics. “Single genes frequently do many things in the body at different times,” Rutherford explains. “Genes work in networks and cascades and hierarchies.” That means dozens if not hundreds of sequences of nucleotides in the DNA molecule “play a small but cumulative role” in traits that “can be summarized in a simple metric — height, eye or skin color.”

Folk taxonomies like “race” don’t map with our elementary understandings of genes and their expression — the transformation of genetic information into actual organisms. When we account for the countless environmental influences upon any individual life, the foolhardiness of making confident statements about racial heredity becomes readily apparent — or should. People and populations do differ, but “in the pursuit of power and wealth, the fetishization of these differences has been the source of the cruelest acts in our short history.” Racism serves as a crude apologetics for such horrors, but it also pervades Western culture in subtler ways, through popular stereotypes and assumptions.

Rutherford dissects many of these assumptions, including those around athletic performance. “The Negro excels in the events he does,” Dean Cromwell, who coached the Olympian Jesse Owens, once said, “because he is closer to the primitive than the white man.” Others have pointed to slavery, which they claimed accelerated human evolution by selecting for strength and power. Rutherford demolishes such thinking. He points out that slavery involved numerous occupations that made few if any athletic demands: “Indeed, one 2014 study of the DNA of 29,141 living African Americans showed categorically no signs of selection across the whole genome for any trait, in the time since their ancestors were taken from their African homelands.” He also considers slight genetic variants that have been detected among successful East African long-distance runners. But those variants also exist among Kenyan and Ethiopian populations that are not particularly athletic. What seems more important for the world’s best runners is high elevation and, especially, a culture of running and intensive coaching. Genetics alone accounts for very little of their athletic prowess.

With respect to alleged differences in intelligence, figures are often fudged and cherry-picked by white supremacists. While low average IQ scores in sub-Saharan Africa cannot be wished away, they should be viewed critically — especially given the continent’s genetic diversity. “This field is not just beset by ideological battles,” Rutherford notes, “but some mountainous scientific terrain — and we are currently only in the foothills.” The Flynn Effect — observed increases in average IQ scores that correlate to rising standards in education, health, and nutrition — applies across the racial board. In the 1970s, to cite one example, the average IQ in Ireland was 85, compared with 100 today. “That change, if real,” Rutherford explains, “occurred within one generation, so genes cannot be the driving factor.”

Surprisingly, perhaps, Rutherford has been a somewhat uncritical exponent of “synthetic biology” in the past. In his 2012 BBC documentary, Playing God, he enthused about splicing spider genes into the DNA of goats, so they might produce spiderweb protein in their milk. He presented the possibilities as endless — and a positive scientific development. This sunny outlook seems somewhat at odds with the cautious approach to molecular genetics he takes in How to Argue with a Racist. After all, if we can alter DNA to manufacture spider silk and cheap drugs, or to engineer pest-resistant crops that are less likely to spoil after harvest, why not do so for human beings as well? Make them healthier, brighter, stronger, taller? Give them blond hair and blue eyes?

In fairness, Rutherford himself is no proponent of eugenics. In February he warned, in a lengthy Twitter thread, that trying to enhance specific traits in animals can result in “unforeseen and awful side‑effects.” Yet the field is moving toward such ends at dizzying speed. The double-helical structure of the DNA molecule, which contains our genetic code, was discovered only in 1953. The first recombinant DNA, made by artificially piecing together strands of DNA from more than one organism, was created eighteen years later. The first entirely synthetic organism was created in a laboratory in 2010.

In 2012, the CRISPR gene-editing technology was invented, by which sequences of DNA in a human being can be cut out and replaced by others. In 2015, it was used to modify an embryo, including germ-line cells that carry genes from one generation to another. That caused an international uproar, and rightfully so. Then last year, CRISPR — which stands for “clustered regularly interspaced short palindromic repeats”— was used for the first time to treat a patient with the fatal blood disorder B‑thalassemia. When it comes to this type of gene therapy, one individual assumes all of the risk. But altering human germ plasm affects future generations and raises fundamental ethical and social questions.

With Altered Inheritance, the eminent bioethicist Françoise Baylis, of Dalhousie University, sounds a much-needed note of caution as the research proceeds. CRISPR offers hope to individuals with various genetic disorders, such as Huntington’s chorea. But what if that disorder — and others — could be eradicated from the gene pool entirely? The problem with what Baylis calls this “heady enthusiasm,” as both she and Rutherford point out, is the sheer complexity of what genetic material does. What seems like a simple edit could conceivably cause cancer, for example. “Off-target effects” are unpredictable, and may always be.

But curing illness isn’t the half of it. Why not provide new generations with an “enhancement” or two? That is, of course, where all of this science is inevitably leading. And the emerging ethical questions dwarf all of the preceding ones. What makes for a “desirable” enhancement? Could a well-intended CRISPR intervention lead to less diversity, and hence less tolerance of physical and mental differences? Could new (and expensive) technologies increase inequality among individuals and nations? Instead of trying to stop devastating environmental change, should we simply breed humans who are better able to cope with it?

Until we can reach a “broad societal consensus” on where we want to go, Baylis advocates for a “slow science” with ethical brakes. But, as she concedes, “bioethical successes in the realm of policymaking have been few and fleeting.” In the meantime, curiosity-driven, profit-oriented, publish-or-perish science is hurtling onward, leaving ethics and off-target collateral damage in its wake.

Nearly twenty-five years ago, a scoffing editor of The Lancet argued, “The ethics industry needs to be rooted in clinical practice and not in armchair moral philosophy.” Steven Pinker echoed that view in 2016, stating bluntly that ethics should just “get out of the way.” Both bring to mind Peter Medawar’s comment in Advice to a Young Scientist : yes, curiosity might kill some cats, but it cures others. Somehow, as we peer into the CRISPR abyss, that jolly sentiment seems less than reassuring. Françoise Baylis and Adam Rutherford, in their timely books, urge us to pause and consider the motives and the consequences of scientific research. In the real world, it’s not just proverbial cats that are at stake.