Inside the Local Campaign: Constituency Elections in Canada

Conventional wisdom says that Canadian electoral politics is increasingly centralized. Trends in marketing, technology, and fundraising all favour consolidation, leading parties to adopt a franchise model where candidates serve as ambassadors of a national brand rather than as independent actors. The media and voters overwhelmingly look through a national lens, with the reputation or perceived quality of local candidates being the main driver of votes for only as little as 4 percent of the electorate. It’s with this centralizing trend in mind that the notion of a book focused on local campaigning feels surprising, even unfashionable. If voters aren’t paying attention to their own candidates, why should political scientists — or general readers, for that matter?

Alex Marland of Memorial University and Thierry Giasson of Université Laval set out to answer that question with Inside the Local Campaign: Constituency Elections in Canada, their third consecutive election debrief for UBC Press’s Communication, Strategy, and Politics series. This volume, centred on the forty-fourth federal election, in 2021, provides a comprehensive look at constituency-level campaigns through the lens of numerous scholarly contributions. These, in turn, are informed by interviews with political staff, candidates, and journalists. While the broad range of experiences reported here make for a significant contribution — especially considering the relatively slight body of academic research on local campaigns in Canada — the book’s additional value is the trove of insights into the complex and mutually interdependent relationships between candidates, staff, volunteers, and national parties.

“Telling the story of local campaigning in Canadian federal elections is telling the story of political conflict and its negotiation,” Giasson writes in the book’s conclusion. “Pressure points arise between the party’s national command centre, which expects its political marketing goals to be achieved and the party’s electoral communication and messaging amplified in every riding, and local organizations that might be faced with regional specificities putting them at odds with the national strategy or some partisan policy positions.” So while it may be tempting to frame the tense, paradoxical ties between national and local interests in binary terms, the reality is more fluid. In a fast-paced digital environment where an offhand faux pas can spread nationally in seconds and party-sanctioned messages can be distributed to pinpoint target voters by postal code, riding, or demographic group, the lines between big and small are blurred. And though political parties may increasingly focus on a national brand, their path to forming government remains dependent on 338 individual scoreboards. 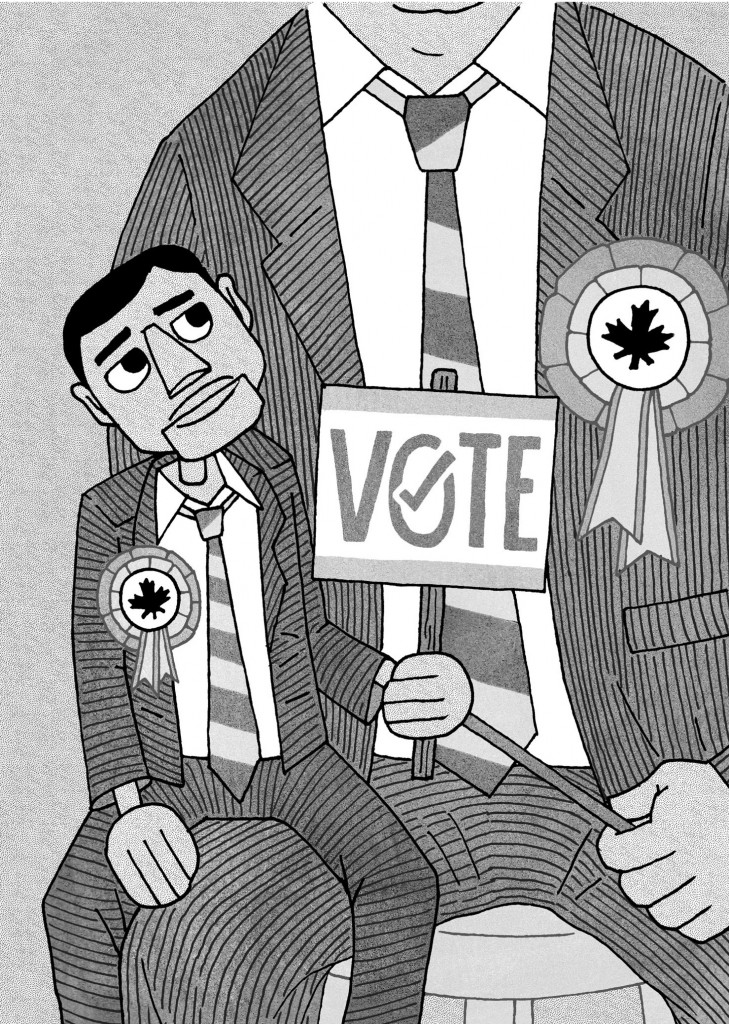 Not every element of constituency campaigning is equally susceptible to local-versus-national tensions, of course, nor does every chapter of Inside the Local Campaign rely on such framing. For example, the University of Guelph’s Gillian Maurice and Tamara Small analyze the tradition of campaign signage, Holly Ann Garnett of the Royal Military College examines Elections Canada’s efforts to administer safe and fair votes during the pandemic, and Thomas Collombat of the Université du Québec en Outaouais discusses the tactics used by registered third parties. Nonetheless, the chapters that reveal strains between constituency actors and their national counterparts are the most engaging, especially within the broader context of changing power dynamics.

Contributors point to a range of historical developments that have left local campaigns increasingly reliant on national resources, from legislative changes that allowed for the printing of party labels on ballots in 1972 and the ban on corporate and union donations in 2007 to the proliferation of national voter management platforms over the past two decades. Community intuition, relationships, and hustle remain valuable aspects of a constituency campaign, but these are increasingly supplemented by data management and modelling, digital marketing, and voter engagement platforms. Through its insights on data-driven tactics, the influence of national committees on constituency nominations, and demands for professionalization across the board, Inside the Local Campaign lets readers peek behind the curtain at the complementary but sometimes antagonistic links among the many players.

It’s difficult to talk about local campaigning in Canada without examining the impact of the 2008 United States presidential race and, specifically, the Barack Obama campaign’s modernized approach to fieldwork. Inspired by Obama’s so-called snowflake model, where digital infrastructure empowered local Democratic organizers to more cohesively build their own teams and networks of identified voters, the Liberal and Conservative parties of Canada rapidly adopted copycat platforms. While voter management systems like NationBuilder, Ecanvasser, and Qomon are now affordably accessible to any grassroots or independent campaign, the institutional knowledge and resources required to use big data most effectively are much more commonly held at the national level. What was once seen as a breakthrough for local voices has arguably resulted in even more uniformity across the country.

H. D. Munroe and Kaija Belfry Munroe of Politikos Research examine these developments and briefly outline how lists of donors, volunteers, and supporters are integrated into databases, as well as the use of predictive analytics to infer unknown data. Additionally, local electioneering is often reliant on social media advertising platforms, which offer their own streams of data that can be integrated with other information. While both contributors accept the premise that big data can enable a more efficient run for office, their conclusion about its impact is much less decisive: “The rhetoric of revolutionary change might be overblown.”

This counter-consensus analysis is supported by previous research on the 2015 and 2019 federal elections, as well as a case study on the 2021 Liberal campaign in Charlottetown, which resisted using Liberalist, the national party’s data tool, to track sign requests, volunteer offers, and donor information. In fact, it deliberately sought to minimize the amount of data collected on voters, instead opting to maximize the candidate’s personal interactions.

While this seemingly anachronistic approach demonstrates a significant variability in the way that local campaigns use data, it is also worth noting the advantages held by the Liberal candidate, Sean Casey, an incumbent since 2011 in a Prince Edward Island riding that has been red for thirty-four years. Casey’s in-depth experience, name recognition, and ability to canvass the entire riding due to its small geographic size meant that a more traditional strategy could be successfully employed. Munroe and Belfry Munroe go as far as to suggest that the advantages of data analysis are often advanced by people and companies with strong organizational and financial incentives to promote such a belief. But similar skepticism can and should be applied to a popular local MP who chooses to eschew data collection practices in favour of a more independent campaign that requires less central oversight. Ultimately, the biases of any political practitioner can skew their perception of a given tactic. That’s exactly why updated, independent research matters when it comes to constituency campaigns.

Scholars may disagree about the extent to which national voter management platforms affect local tactics, but quantitative, data-driven insights have unquestionably run up against homegrown folk knowledge in various forms. Such encounters have resulted in tectonic changes for campaign managers and candidates as well as for regional campaign directors, whose roles are examined by Jared Wesley of the University of Alberta and the former Liberal Party of Canada national field director Richard Maksymetz. Their chapter traces the origins of the regional campaign director role to the mid-twentieth-century advent of such regional parties as the Co-operative Commonwealth Federation and Social Credit. For Liberals and Conservatives, fending off these upstarts demanded attention to politically astute regional voices who could host leaders on tours and feed provincial interests into the national party.

“Those who wish to see this trend reversed face a structural challenge.”

Wesley and Maksymetz point to a similar pattern of centralization in the closing decades of the century. “Party databases and internal polling gave headquarters more intelligence about local races than regional and district leaders,” they write, “with the latter becoming increasingly dependent on the national campaign for resources and information.” Regional campaign directors continue to be instrumental to national success, although their focus has shifted toward the implementation of strategy rather than its development. Today, that means candidate recruitment, on-the-ground campaign oversight, and fundraising.

The University of Waterloo’s Anna Lennox Esselment and the Communitech executive Matthew Bondy provide valuable observations about the tools that parties have used to exert control over candidate nominations, in part informed by Bondy’s own experience as a runner-up for the Conservative nomination in the Ontario riding of Kitchener-Conestoga. Most notably, the co-authors point to independent research from the Samara Centre for Democracy, which suggests that fewer than one in five candidates for federal office are selected through open nomination processes.

Those who wish to see this trend reversed face a structural challenge posed by the successive election of minority governments. The potential for “snap elections” creates a sense of urgency that allows national committees to bypass open nominations. This reality — along with associated practices like shortened nomination races, changing membership rules, and retroactively closing certain races to disadvantage candidates — raises valid questions about the democratic process in twenty-first-century Canada.

National parties have various reasons to intervene locally, from electoral readiness and support for underrepresented groups to ensuring that all candidates have track records and public positions that align with party values. As Bondy’s personal experience shows, a well-mobilized insurgent campaign still has the potential to defeat a party insider with a more activist strategy. But a skeptical reader may conclude that electoral district associations are increasingly undermined by national parties focused on finding what Marland has called “virtuous ‘brand ambassadors.’ ”

Carleton University’s Paul Wilson writes about local campaign workers, as do Royce Koop of the University of Manitoba and Anthony Sayers at the University of Calgary, who look at campaign managers in their co-authored chapter. All three writers nod to an increase in professionalization on the campaign trail through the employment of paid staff and a reliance on external consultants. Ahead of the 2021 vote, Wilson noted a waning level of engagement of partisan volunteers, which was reinforced by comments from Liberal, Conservative, and NDP campaign staff. While the observation could be written off as yet another consequence of COVID-19, it builds on previous Samara Centre research that shows Canadians are increasingly opting out of political activity.

Many paid staff, however, actively volunteer in campaigns — by taking leave from politicians’ constituency offices or Ottawa offices, all of which have grown in size in recent years. Wilson refers to this exchange as “unspoken recompense for the privilege of keeping their jobs after the election.” When local campaigns have fewer community volunteers and a larger pool of assigned political staff is imported from outside the riding, attention to residents’ voices requires a more deliberate emphasis.

It would take a selective reading the Inside the Local Campaign to conclude that the metaphorical pendulum has swung fully in favour of national campaign committees. Consider that much-discussed poorly planned NDP tour stop in Winnipeg, where the party leader Jagmeet Singh was publicly humiliated by First Nations chiefs pledging their support for a Liberal candidate. Or the Liberal oversight when headquarters mistakenly and repeatedly sent canvassers to empty vacation homes in Whistler, British Columbia. Such accounts demonstrate that there will always be a value in familiarity with local geography, politics, and culture.

However, this book should leave no doubt in a reader’s mind that resources and focus have shifted gradually toward national operations, marketing, and strategy. For voters who are motivated by a preferred leader and partisan affiliation, having a common set of messages and campaign tactics simplifies the political process in many ways. At the same time, it’s worth remembering that meaningful engagement is fostered by a sense of being heard, being understood, and being able to contribute.

Jeff Costen is a principal at Navigator, a national communications and public affairs firm.