Letters from Montreal: Tales of an Exceptional City

O God! O Montreal! Oh wait . . . Are we going all Samuel Butler again, nodding to his century-old A Psalm of Montreal, which includes that refrain? Are we offering (apologies to Buzz Bissinger, who wrote a book about Philadelphia with this title) a prayer for the city in the St. Lawrence? A love song (apologies to Frank Sinatra, who sang this about Chicago) to that toddlin’ town? Well, yes. And a good thing, too.

In recent years, the quarterly magazine Maisonneuve, which borrows its title from Paul de Chomedey de Maisonneuve, the founder of Quebec’s largest city and the namesake of the one-way boulevard (and frantic two-way bike lane) that marches westbound through town, has published brisk but evocative Letters from Montreal. These are dispatches that celebrate the city. That eviscerate the city. That explore the hidden mews and reigning myths of the city. That get stuck in its potholes, linger amid the croissant-buttery air of its coffee shops, huff in its hills, and delight in its lights. That regret the changes in the city, cluck in wonder at its cloisters (now condos!), and more. Madi Haslam, the journal’s recent editor-in-chief, has chosen some of her favourites, Véhicule Press has stuffed them between soft covers, and — voila! — a psalm, prayer, and love song for the city that never sleeps. (No apologies necessary for that allusion, as the arbiter of contemporary culture that is Wikipedia lists Montreal as one of twenty-three municipalities that merit this particular honorific. It is not a coincidence, as the Communists used to say, that the convenience store giant Couche-Tard, meaning “night owl,” originated in nearby Laval.)

The guiding principle of this crisp little book — truly you can stick it in your pocket, and truly its contents will stick in your mind — is set out in the second paragraph of Haslam’s introduction. The governing notion seems to be that Montreal has an internal logic all its own, a logic in proud defiance of Aristotle, Philo the Dialectician, Cicero, Hobbes, and Bentham. Here is the city — her city, and welcome to it — as set out in the Book of Madi: 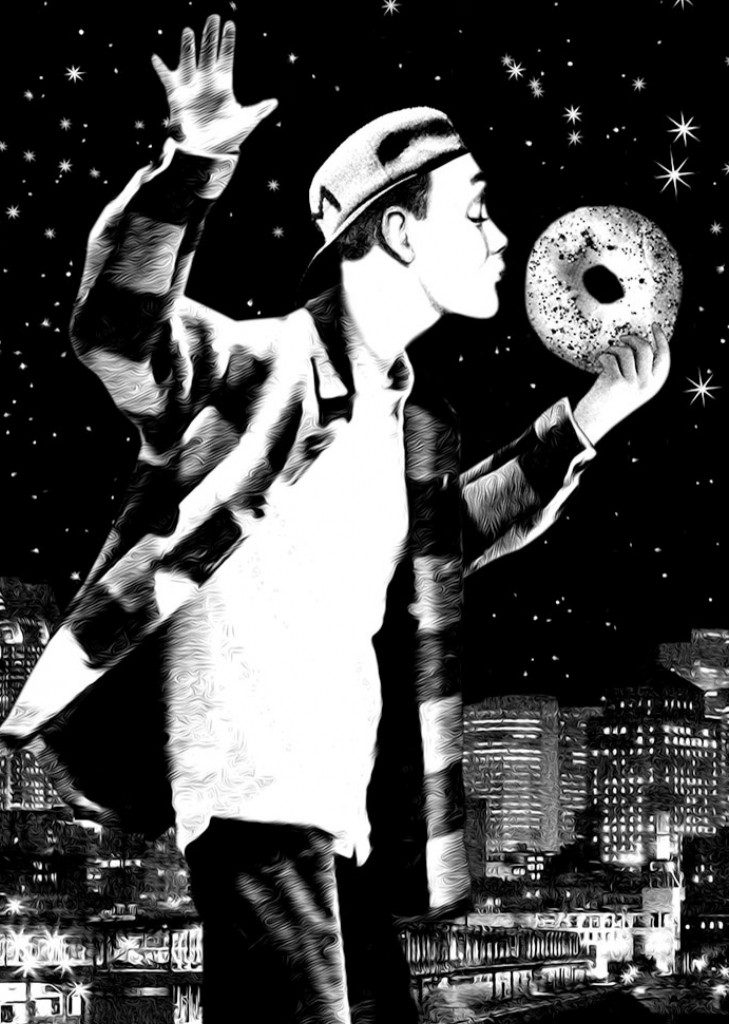 The longer you live here, the more that logic reveals itself to you. You pick up on the unspoken politics of sharing a ruelle, or a terrasse, or a paper-thin wall. You learn to navigate the world’s most convoluted snow-plowing system. You suffer through a bitter winter only to melt into the concrete by summer. You come to appreciate the subtle beauty of a pothole or a traffic cone. With time, this place starts to feel like an elaborate inside joke. How exactly does this city exist?

At the heart of this collection, which also includes a handful of newly commissioned essays, is the zeitgeist of the métropole, which to my mind is to wear flannel nine months a year and to be a flâneur all twelve. Having fun is only half the fun. Montreal treats the bagel like a communion wafer, rotisserie chicken like foie gras. It looks askance at — which, in the peculiar geography of Montreal, means looks down on — Toronto. Winnipeg? Is that an actual place? Calgary? A gateway to skiing, yes, but an evening lift ticket there doesn’t include a plate of spaghetti. Vancouver? That is somewhere faraway, like one of Neptune’s moons, where physics is turned upside down, for how else to explain why it rains when it is supposed to snow. (In Montreal, the first snows come, as Mim Kempson writes in this volume, like “confetti falling from the sky.”)

Montreal is an old ville, yet it seems as if it is constantly under construction. It is the last word on food and high culture (these things it devoutly believes), but no roadwork ever comes to an end. That charmless feature is immediately apparent to an astonished visitor — a greenhorn on Avenue Greene, you might say, in homage to the once prodigious street obstacles on its lower blocks — from any other major city, where corruption at least comes to a full stop. (Here it would come to a full arrêt, if it ever did. More likely, it would slow because of a city-wide arrêt de travail maladie, basically “sick leave.”) Montreal is home to great markets (Atwater, Jean-Talon) and Holt Renfrew. If in Chicago you might see a man dance with his wife, in Montreal you will surely see a woman dance with hers, and of course over there, at the centre of the floor, there’s a man dancing with someone else’s wife. If you can make it in New York, as the song preaches, you can make it anywhere. But in Montreal, people are content simply to make out — often, as Haslam notes, with perfect strangers.

This is an island of baguettes and bagatelles, but plastic grocery bags are unknown. Its landmarks are a great orange ball visible from Boulevard Décarie — some 2,400 kilometres from the closest citrus grove — and a neon sign advertising a storied brand of flour with an English name, in a place where such signage is interdit. And atop the mountain that gave the city its musical three-syllable name, there’s a giant cross hovering over a populace that has forsworn the Church. How can you say all this doesn’t make perfect sense? Or that it doesn’t make for a perfect place? Or, at the very least, for a great sensibility, which unfolds in these pages.

Letters from Montreal has a flaw, which Haslam acknowledges fully: by and large, these are pieces by anglophones for an anglophone readership. In Maisonneuve’s recent twentieth-anniversary edition, the founding editor and publisher Derek Webster refers to the publication as “an English-language magazine with a French name.” So you might think of this book as Montreal without the accent aigu. But thumb through its pages and you may linger on the essay where Bernard Rudny talks about a city that could, in the space of a pothole, rechristen Dorchester Boulevard (named in honour of Guy Carleton, the eighteenth-century governor general of British North America) as Boulevard René-Lévesque (in honour of the twentieth-century separatist leader). A city that could name byways for Camillien Houde (remembered for four separate stints as mayor and for being imprisoned for sedition during the Second World War) and for Maurice Duplessis (now broadly discredited for being the maestro of the grande noirceur and for corruption, religious rule, and antisemitism). “These streets outlast, and eventually forget, their namesakes,” Rudny concludes. All that amid licence plates that read “Je me souviens.”

You might also pause on the reflections of Serena Ross, herself a former editor-in-chief of Maisonneuve, who once answered an ad that bellowed, “Wanted: pickle helper,” which she saw on the door of a delicatessen at the corner of Saint-Laurent and Napoléon. I liked this little essay — especially the description of the proprietor as “a cucumber artist”— so much that, repeating its lovely passages several times, I came to think of myself as the reader’s equivalent of the water-bound, wetsuit-clad adventurers at the Lachine Rapids, surfing in place.

And surely you’ll ruminate on the reminiscences of Derek Webster, son of the distinguished journalist Norman Webster. Describing his university days on a balcony at the corner of Clark and Prince Arthur, the younger Webster describes the feeling of freedom, up there above the clatter of the street, during the summer he took classes at McGill, memorizing Malvolio’s lines from Twelfth Night and watching the world go by. I found myself channelling the Drifters crooning a Carole King song —“Right smack dab in the middle of town / I found a paradise that’s trouble-proof . . . up on the roof”— and wishing that I’d written this, and knowing that I’ve thought it:

When middle age feels like a series of disappointments waiting to present themselves — a state of mind we call jaded — I try to remember that an ideal mix of innocence and experience still exists and that lessons learned in my twenties can be relearned at any age: Don’t lean back too far. Keep looking out at the world. Freedom means time. The good life is within reach.

For all its positives, Montreal is mostly a set of negatives, all revolving around a civic governing principle: not being Toronto. “Growing up in Toronto,” Katherine Laidlaw writes, “I had always thought of Montreal as a city of visitors — a mythological place with a European air and impassioned politics.” She might have added that (to borrow a phrase from Cheers) Montreal is where everybody knows your name but Toronto is where the only thing that anyone cares about is what you do. One city is an extended bar; the other has the most members of the Canadian Bar Association. An exodus of bankers and insurance executives has rendered this once great commercial centre cooler than staid Queen City, which is where the writer and editor Jessica Wei lives. She describes wandering through Montreal’s Chinatown (“this neighbourhood caught between cultures”) and realizing, “Fragments of my parents’ past are strewn all over the city, little chapters of their brave, ambitious, impecunious youth. They follow me around cobbled corners, from restaurant to grocery store, all the way home.”

A more controversial figure now than he was when this collection was gathered, the musician Win Butler is a cultural touchstone in this book, as is his indie band Arcade Fire. I’m too old and far too conventional to comment on their actual influence, but I note they duck in and out of the letters. Inevitably, another theme is winter, and Mim Kempson, who fled after just one hiver québécois, writes of the season’s local lessons: “Take a shot of vodka before outings (it warms you up); befriend your neighbours (they will help push your car when it gets snowed in); and take intermissions on your walks by stepping into oven-heated bagel shops.” Words to live by.

But, really, what do I know? I’m a bit of a flâneur myself, on an extended first date with Montreal. Born in Massachusetts to a Montreal mother, I visited the city repeatedly as a child (the blue whale at Parc La Fontaine!). Later, I often brought my own kids here (vicious fights about whether it was too cold to ski at Tremblant). And for the past few years, I have lived here, for several four- and seven-month periods (long white afternoons in the Librairie Renault-Bray, just a few steps down Rue Saint-Denis from the wonderful little Librairie Ulysse, home to every travel book I have ever coveted).

The naïveté and romance of an exhilarating first date have remained with me, probably (here’s an acknowledgement, a kind of full disclosure) too long. I’m a romantic, at least about Montreal. So forgive me my trespasses into florid prose and praise. For as I typed this, I kept thinking about the man in that Robert Frost poem who says it is “restful just to think about New Hampshire. / At present I am living in Vermont.” I wrote this review in Montreal, where life is anything but restful, but by the time it is printed, I will be living in Pittsburgh. Back in Pittsburgh, yes, though bringing with me — and the subtitle of this book is irresistible, because it is ineluctably true — tales of an exceptional city. Exceptional, even if the cucumber artist died more than twenty-two years ago and his store has gone away.

David Marks Shribman won the Pulitzer Prize for beat reporting in 1995. He teaches in the Max Bell School of Public Policy at McGill University.