Dinner on Mars: The Technologies That Will Feed the Red Planet and Transform Agriculture on Earth

Lenore Newman and Evan D. G. Fraser, two long-time friends and colleagues, were accustomed to travelling “around the world, studying the global food system.” But in March 2020, while bored and locked down, they began to feel that “all those other countries might as well have been on another planet.” From the comfort of their homes in British Columbia and Ontario, respectively, Newman and Fraser decided to combat their lockdown boredom with a thought experiment: How will people eat on an actual other planet? The result is Dinner on Mars: The Technologies That Will Feed the Red Planet and Transform Agriculture on Earth, which explores one of the greatest challenges in the history of agriculture.

“Self-sufficiency, food sovereignty, and self-reliance,” they write, “will be the order of the day” for any off-world colony, including their imaginary Martian settlement, BaseTown. There will be massive obstacles to sustaining and feeding a viable community: the Red Planet’s frigid climate (the average temperature is minus 60 degrees Celsius), thin atmosphere, damaging radiation, and toxic bedrock, for instance, all make widespread industrial agriculture, as we know and currently practise it, impossible. Instead, humanity will have to learn “to think small” and create new systems that can be streamlined for efficiency above all else. “In many ways,” they write, “the whole of any Martian community will need to be a greenhouse,” and plants from Earth will be “one of the workhorse technologies.” They’ll clean the air and water. They’ll provide medicine and building materials. They’ll populate gardens, which are to be “both pleasing and practical.” And they’ll be our primary food source. “When we go to Mars, if we are to succeed, we won’t go alone.” Our photosynthetic friends will have to accompany us, as will a sense of terroir, that “elusive concept that lies at the heart of why we cling to centuries-old culinary practices rather than simply munching a nutrient paste a few times a day.” Put it this way: food has aesthetic, cultural, and historical dimensions that can’t be ignored.

Consider grains. Today, 50 percent of a given person’s calories come from some form of grass, and the story of these hardy plants is, Newman and Fraser remind us, “the story of civilization.” Unfortunately, our beloved wheat, corn, barley, oats, rice, and so on require a vast amount of arable land. The fertilizers, irrigation systems, and expensive tractors we use to grow and harvest crops have “yoked our food system to fossil fuels,” which invites a whole other host of problems, which Newman and Fraser nod to but don’t discuss. But there’s hope for both Earth and Mars. Recent research suggests that by “hacking into the genetics of photosynthesis,” future grain farmers could produce more with less, even in extreme weather. That sounds like just the thing for a BaseTown yield. 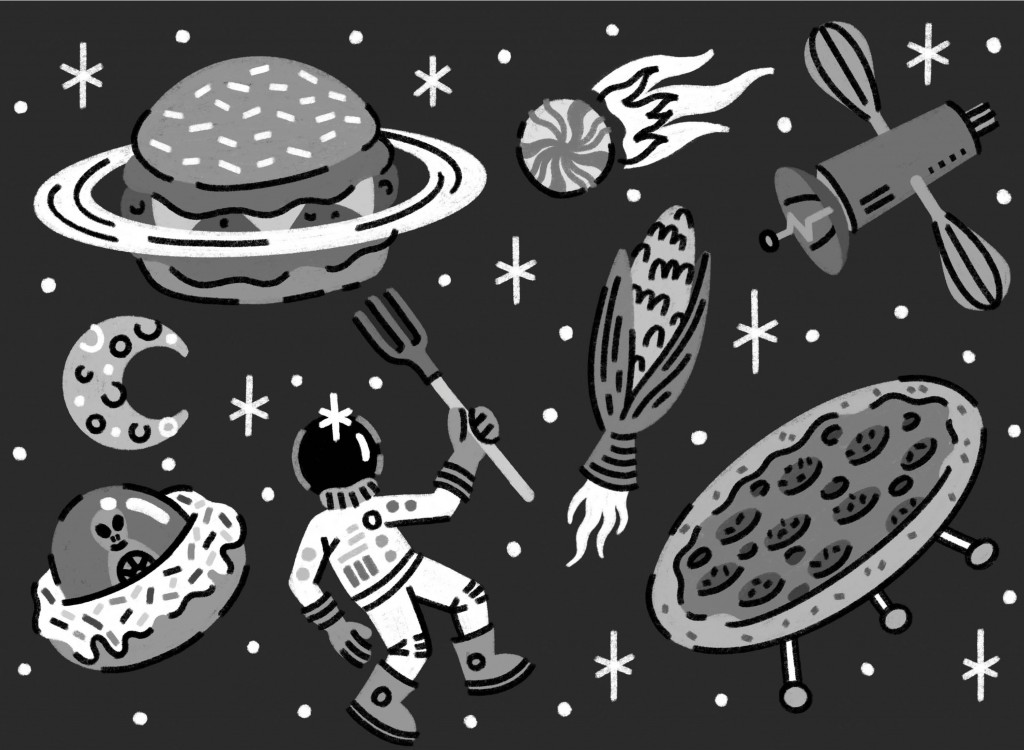 Cooking up solutions for an out-of-this-world problem.
Image by Alexander MacAskill

To thrive elsewhere, we need to understand the limits of our current systems of food production, distribution, and consumption. Newman and Fraser explore a wide variety of earthbound practices that seem destined to fail. Today, the planet is producing more stuff to eat per capita than at any other time in human history. “Yet despite this tremendous bounty,” they point out, “hunger is rising.” It takes gargantuan amounts of feed and water (twenty-five kilograms and up to 200 litres) to keep a single dairy cow alive each day, and our rapidly spreading Western diet “is so rich in simple carbs, sugars, and fats” it’s making us ill. Obesity and diabetes are now top public health concerns. If we are to colonize other worlds — or survive the next few centuries at home — we’ll have to be a lot more efficient and creative with resources. That means we’ll need to develop closed systems that produce little to no waste.

And this notion is not science fiction. The authors draw attention to Re(Purpose), an innovative project based in Guelph, Ontario, which uses the spent grains from a local brewery to feed a nearby farm’s black soldier fly larvae. These insects are in turn used for fish food. The fish then produce excrement, which is used as fertilizer to grow potatoes, which are then served alongside the fillets. Food produced by “repurchasing the waste products of the other steps in the chain” will be essential. In BaseTown, every citizen will have some role in maintaining the links in that chain, such as running the “autonomous controlled fruit production system” or managing composting and recycling infrastructure.

So what’s on the Martian menu? Something healthy, probably. Breakfast could be a nutrient-dense bar made from algae (the microbes are easy to cultivate). “Hyper-fresh” salads will feature prominently. A “printed chicken breast” might be on the table, along with a few comfort foods, like “seasoned fried protein balls” and french fries. Most livestock products and simple carbs, however, aren’t likely to be available. But that might just be better for us.

Aside from the authors’ maddening tendency to flip between first- and third-person narration, this slim volume is a fun read and easy to digest. Fraser and Newman manage to critique our current food systems with just the right amount of speculation and none of the sermonizing. What’s more, they leave readers with the knowledge that one of our greatest strengths — culinary or otherwise — is creativity. And that will serve us just as well on Earth as on Mars.