Victoria’s Macchiato Caffe is nestled among a collection of tourist shops selling assorted gewgaws. Jonathan Manthorpe slips inside, snags a table by the window, and orders a regular medium-roast drip, black. Since the 1970s, he’s shuffled between positions as a writer, columnist, and foreign correspondent, but his amiable attitude and rumpled look have never changed.

His latest book, Claws of the Panda, is an exposé of Beijing’s clandestine campaign to influence Canadian politics. It arrived in January, when deteriorating diplomatic relations dominated the news: China had just lodged an official complaint with the Canadian ambassador following the high-profile arrest of a Huawei executive, at the Vancouver International Airport. Days later, two Canadians were detained in China under dubious circumstances. More recently, trade talks between China and the United States are at loggerheads, with global economic implications, and those two Canadians have been formally arrested for alleged spying.

Manthorpe wants to help readers see their way through all of this, urging them to “find a less self-delusional, more courageous, more intelligent way of dealing with the new version of the Middle Kingdom.” The lone author battling a global superpower—it makes for heady conversation in a quiet café. 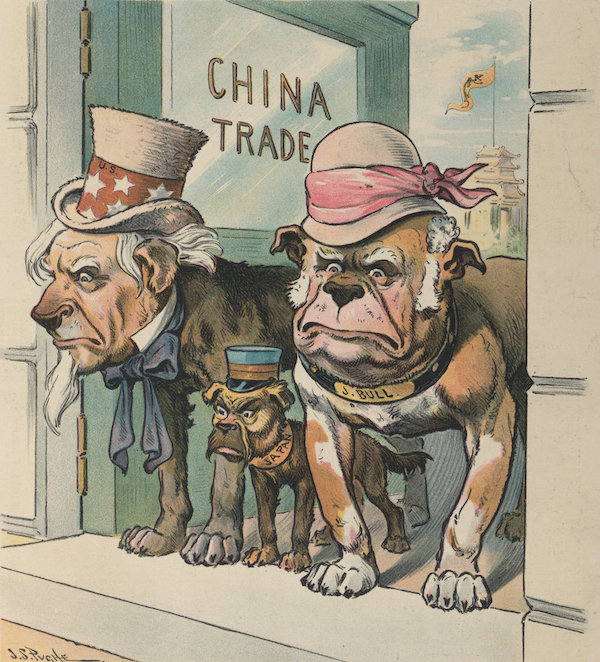 The former journalist knows his stuff though, and fifty years’ experience—with posts throughout Africa, Europe, and Asia—made him the right guy with the right story at the right time. But despite the timeliness of a China book, Manthorpe had difficulty finding a publisher. “I’d been through everyone,” he recalls. “University publishers. All the trade publishers. Everyone turned it down.”

In 1974, Gibson was the wunderkind editorial director at Macmillan of Canada. He picked up The Power and the Tories, which New Press, recently bankrupt, had commissioned months earlier. That book, about the Ontario Progressive Conservative’s dynastic Big Blue Machine, was written by a young Globe and Mail reporter at Queen’s Park—Jonathan Manthorpe. It sold well.

Following Power’s success, the Toronto Star lured Manthorpe away from the Globe by promising a big salary and a regular column. The paper eventually named him European bureau chief. Later, he became a correspondent for Southam News. He inherited the service’s library on Asia, which he consulted while writing Claws of the Panda

Despite the book’s timeliness, Manthorpe had difficulty finding a publisher.

Manthorpe’s globetrotting career eventually led to semi-retirement in Victoria, where, sipping his java, he remembers what his old friend said about his book without a home.

“If I was still working,” Gibson explained, “I’d take this in a flash. But I’ll tell you who will publish it. Go to Marc Côté at Cormorant Books. I owe him a favour, and this is the favour I’m giving him.”

Manthorpe sent Côté an outline. The publisher acknowledged he had a demanding editorial style and warned they might have a stormy relationship. One of his demands up front: cut 35,000 words.

“Marc was absolutely right,” Manthorpe confesses. “I’d wandered down rabbit holes that appealed to me. He pointed out they wouldn’t appeal to others.”

It took nine months to get the book from outline to manuscript to press to bookstore shelf. It spent much of this spring on Canadian bestseller lists.

Were it not for repaying a favour, Claws of the Panda may never have been published. The original kindness? Côté nominated Gibson for the Order of Canada in 2017. Sending a bestseller over the transom was the least the retired bookman could do.

Tom Hawthorn wrote The Vilest Rag You Can Imagine: 100 Years of the Ubyssey. It’s due out next year.

Originally published in the May 18, 2019, instalment of