Sleepy in the dim morning light, with one eye on their phone and the other watching for their stop, Halifax Transit bus passengers are perhaps an unlikely audience for a poetry intervention. Will they notice the short poems sitting quietly amid the inevitable ads for insurance companies, tutoring centres, and law firms? Marilyn Smulders, executive director of the Writers’ Federation of Nova Scotia, hopes so.

“The aim behind Poetry in Motion is to get poetry out in public and make it accessible,” she says. “My hope is that people will stop and wonder at what they are seeing.” 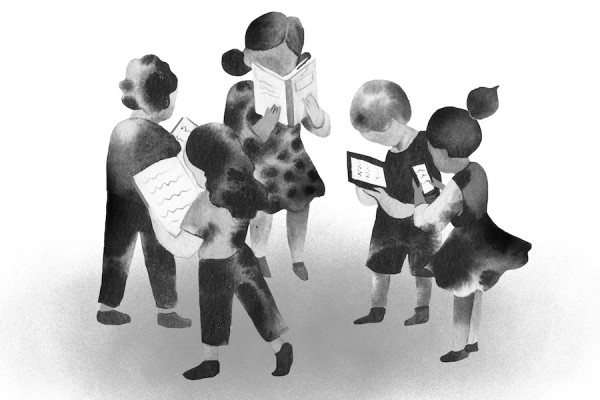 The public arts program began in 1992, when the Poetry Society of America, inspired by London’s Poems on the Underground, worked with the New York City Transit Authority to offer verse to weary passengers. Molly Peacock, then-president of the PSA, described it as a “surprising cultural feast.” The idea spread to other cities.

The program is new to Halifax this year, the result of a partnership between Arts Nova Scotia, the Halifax Regional Municipality, Halifax Public Libraries, and the WFNS. A call for submissions in the spring attracted over 120 pieces.* Entries had to be ten lines or fewer and written on the theme of “home.” Ten were selected, all by writers from Nova Scotia: Cory Lavender, Matt Robinson, and Afua Cooper, among others.*

Amanda Jernigan, a poet and assistant professor of creative writing at Saint Mary’s University, encourages riders to embark on the occasional “thought experiment.”

“I asked myself, what can these poems accomplish in terms of services to humanity,” she says. “For one, they can transform the space. A bus can be womb-like, but it can be rather punitive, too—you’re crowded and jostled. Poems give the sense of a larger geography outside.”

Will commuters notice the short poems sitting quietly amid the inevitable ads?

She points out how the bus can “mediate the sense of space and time.” Passengers generally measure distance in terms of the number of stops or the minutes it takes to go from place to place. However, in one of the winning entries, Shalan Joudry’s “Here,” the speaker invites them “to enter into an Indigenous conception of place and time, to see suppressed histories, with the poet as our interpreter.”

Like Joudry’s poem, Sylvia D. Hamilton’s “Melville Island 1814” transports readers to a darker, hidden past: “nova scarcity  seed potatoes turnip tobacco / good crop in the fall  now all froze to the floor / and if we still here in the spring  we try again.”

“This is a poem that tells us about where we live and its history,” says Jernigan, “and passengers are asked to engage with that history.”

Other poets intervene in the structure of a commuter’s journey. In “t(her)e,” Shauntay Grant wants to “discard days that hold me under, gasping.” The speaker of her poem hopes to “breathe / breathe air that tastes like strawberries: / red, ripe, and ready for picking.”

Anne Simpson’s “Blessing” similarly offers what Jernigan calls an “intervention in the space of the bus.” It helps passengers find a sense of home: “Inside the house / it’s warm, and here at the table, those you love.” Travellers are invited to sit down for water, fresh bread, and a bowl of soup. She writes, “they’re waiting / for the scrape of your chair as you sit down, rest.”

Jernigan acknowledges that many commuters may simply appreciate artistic messaging over capitalistic advertising pitches. For those who take the time to truly read and think about the poems, though, they will return to texting with the realization that they have been transported—if only for a moment, before they reach their stop.

* The original version of this article noted the call for submissions attracted 120 “participants” rather than submissions. It also stated the chosen writers lived along Halifax’s bus routes; actually, they were all residents of Nova Scotia. The Literary Review of Canada regrets the errors.

Cheryl Bell is a freelance writer in Halifax.

Originally published in the December 14, 2019, instalment of