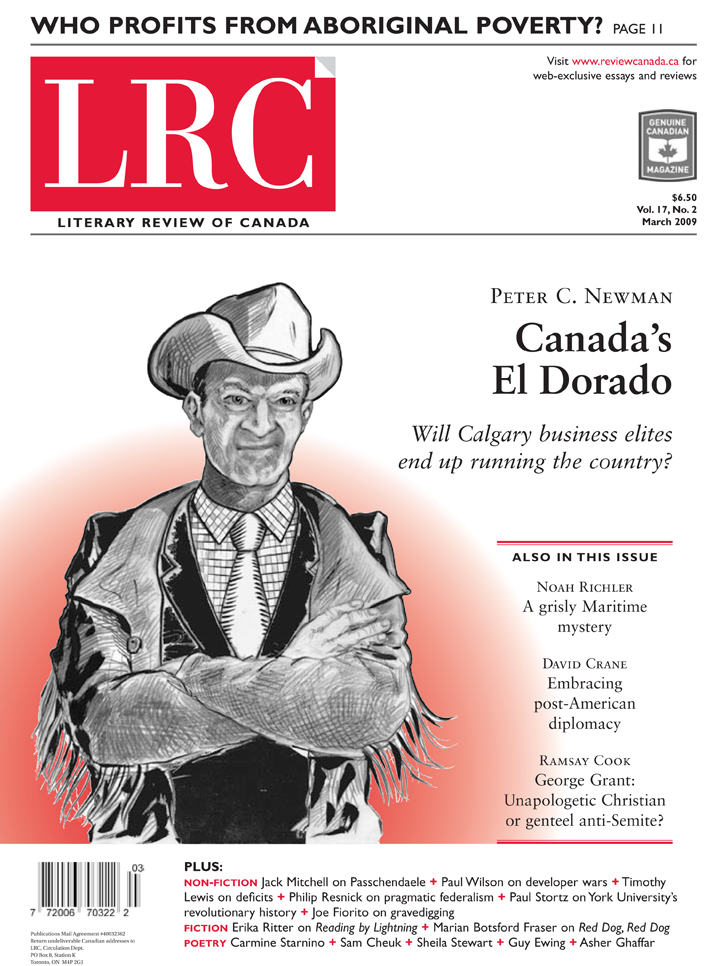 Re: “Anyone for Deficits?,” by Timothy Lewis

Timothy Lewis presents economic arguments that are deeply flawed. While many of the problems with Lewis’s article cannot be addressed given space limitation, let me highlight two.

First, Lewis falls into an all too common trap when he claims that Keynesian deficit spending is a “technically sound policy response.” He forgets to ask where deficit money comes from. Any federal fiscal stimulus package that requires increased government borrowing means that the government will take money from some Canadians (those buying government bonds) who will have less to spend or invest in the private market. The end result is the government merely shuffling money around from one group of Canadians to another, rather than increasing overall economic activity.

The “stimulus” package presented in the 2009 federal budget will therefore have little meaningful impact on the well-being of Canadians.

Had the federal government followed the lead of Canadian households and trimmed spending, significant permanent tax relief (including the elimination of the capital gains tax and more aggressive personal and corporate income tax reductions) would have been possible. This type of tax relief would have improved the incentives for increased work effort, investment and entrepreneurial risk taking. That would be a true stimulus to wealth creation now and in the future.

Second, Lewis perpetuates the myth that the current economic crisis is the result of “deregulatory neoliberal policy.” It wasn’t deregulation that fuelled the crisis; the main culprits were lax monetary policy and poor government policy.

The United States Federal Reserve promoted the conditions for a housing boom by keeping interest rates historically low for too long. It decreased the federal funds rate (upon which commercial banks set their interest rates) 13 consecutive times from 6.5 percent in 2000 to 1 per cent in 2003 and kept it at that level for a full year thereafter. Low interest rates fuelled the housing boom by encouraging individuals to borrow, increasing the demand for mortgages and driving house prices upward.

In addition, U.S. government-backed mortgage giants Fannie Mae and Freddie Mac, whose primary purpose is to expand residential mortgages, increased their purchases and securitization of mortgages issued to low-income earners, thereby funding hundreds of billions of dollars in loans, many of which were subprime. Yet another culprit is the U.S. Community Reinvestment Act, which further induced banks to make high-risk loans to low- and moderate-income families.

There are no painless quick fixes for the economic crisis. Deficit-financed “stimulus” spending and more government intervention certainly isn’t the cure.

My article discusses what caused the return of deficit finance and the activist state. The Fraser Institute’s Niels Veldhuis is more concerned with impugning both. His reasons have neither theoretical nor empirical merit, although he helpfully provides readers with a quick tour of what passes for economic thought in Rush Limbaughland.

Veldhuis refutes his own criticism of stimulative deficit spending in a recession. He resurrects what Keynes famously debunked as the “Treasury view,” positing that fiscal stimulus cannot work because it is a zero-sum game. For Veldhuis, deficits take money from Canadians who make loans to the government, so those people have fewer dollars to spend on other things. Yet he then says that those same Canadians have already trimmed their own spending. That people might not spend enough of their money is central to Keynes’s argument that there can be insufficient aggregate demand, and part of why government has room to pick up the slack in a downturn.

Veldhuis argues that the current crisis was brought on by Fannie Mae and Freddie Mac purchasing mortgages issued to low-income borrowers and by the Community Reinvestment Act, which “induced banks to make high-risk loans to low- and moderate-income families.” Fannie and Freddie lost market share while the housing bubble was taking off. The CRA only encourages credit availability in low- and moderate-income communities consistent with safe and sound banking operations. CRA loans were probably less than one quarter of the subprime mortgage market.

But more interesting are the normative underpinnings of the analysis. Who was responsible for the financial meltdown? Was it the mortgage providers that engaged in predatory lending without any apparent creditworthiness standards? Was it the investment banks that created mortgage related financial vehicles that were not really backed by mortgages? Was it little-known Bush changes to the net capital rule in 2004 that permitted the big five investment banks to increase their debt to asset ratios astronomically while outsourcing risk monitoring to those same, and now collapsed or reconstituted, institutions?

Not according to Veldhuis. His position is that the trillions of dollars in evaporated assets were the responsibility of low-income borrowers and government efforts to assist them. In this counterfactual world, we should put the blame on those who apparently have the most power and the most to gain from financial wrongdoing: poor people. It would be funny were it not for the human consequences of such thinking.

It is always nice to read a review by David Crane. You can count on his conscientiously sharing with the reader what a book is about and providing a fair assessment of its contribution. But even David sometimes gets it wrong, as he did in the case of my book, From Pride to Influence: Towards a New Canadian Foreign Policy. I am sure he read the book, but he did so wearing the blinders that are standard issue at the Toronto Star when it comes to Canada’s relations with the United States. The book does not counsel that in its foreign policy the government of Canada concentrate all of its resources on the U.S. to the detriment of the rest of the world. Rather, it argues that unless Canada grounds its foreign policy in a productive and mutually respectful relationship with the U.S., it is unlikely to gain much traction in pursuing issues with the rest of the world.

The book criticizes the foreign policy of the Chrétien-Martin years because it failed to understand this critical dimension of where Canadian interests lie. In looking forward, the book recalls the strengths of the Pearson and Mulroney years. During both those eras, Canada reached out effectively to other parts of the world in large part because the relationship with the U.S. was functioning as it should. That does not mean there were no problems. Any intense relationship is likely to have its ups and downs. But the basic strength of the relationship made it possible to solve difficult problems to the mutual satisfaction of both countries. As a result, other countries took Canada more seriously and Canadians were able to exercise more influence on issues that were important to them.

It is obvious that in the decades to come countries such as China, India and Brazil are likely to loom larger than they did in the past, and it behooves Canada to make sure that we will have the capacity to deal with them effectively. But they will not be able to replace the U.S. as the bedrock upon which Canada must pursue its security and prosperity interests. Nor does their rise mean a U.S. in decline. In any event, it is only with the U.S. that we will continue to have a relationship that touches the full range of Canadian interests and concerns. History, demography and geography all point in that direction. It would be irresponsible for any Canadian government to think otherwise.

Re: “A Happy Marriage of Convenience,” by Philip Resnick

Reading Philip Resnick’s review of the federalist/separatist debates was like seeing a girlfriend whom you used to love desperately but who had changed so much you had trouble recognizing her—and she you. Any history of those years and their aftershocks feels about as relevant as comparing poutine to fettuccine, no matter how well written the books are or how balanced the opinions.

Quebec will separate. That is the reality because the federalist argument no longer applies. Canada as represented by Messieurs Mulroney, Chrétien, Martin, Harper and Ignatieff has managed to deal itself out of the federalist model that Pearson and Trudeau created. The “to separate or not to separate” argument no longer hinges on how many French immersion schools there are in the country, whether or not the federal public service is bilingual or how many native French speakers there are outside of Quebec. This old debate has been won. Canada is a better place for having strong French-speaking communities across the country and schools where kids can learn in French, but these are no longer sufficient arguments to keep Canada together.

Here’s why. Under a long line of Liberal and Conservative governments, the federalist participation in the fabric of Canadian life has steadily dwindled. The great Crown corporations of the federal state have been sold. Canadian National, for example, now belongs to American interests. The list is a long one. The Québécois who looks at his paycheque sees his taxes going to the “national” government. But all the services that mean anything come from the province. The federal government hardly exists in Quebec and it doesn’t exist much in the Rest of Canada either.

The most recent federal government alone has taken more than $100 million from civil society organizations, but while Quebec has replaced the funding of these organizations with its own money, in the ROC they have been simply abandoned. The result is that the quality of our national engagement and our sense of patriotism has changed in the ROC. It has become more along the flag-waving American model: our guys, right or wrong. This is not a model propitious to fine-tuned federalist discussions like the ones the famous Bilingualism and Biculturalism Commission animated 40 years ago.

Not only has the federal government managed to make itself largely irrelevant to ordinary people’s lives, but there is only one real federalist party left in Quebec and it’s only a matter of time before it is replaced by the Parti Québécois led by the canny Pauline Marois. The fact that French president Nicolas Sarkozy’s innocent remarks supportive of federalism provoked such protest in Quebec among both federalists and separatists indicates that the tide is turning once again. This time it will not be stoppable because too many of the basic connectors between Quebec and the ROC have been eaten away. This includes the francophone communities outside of Quebec who have weathered the many threats of a Canada without Quebec and have settled into tough little enclaves with their own community radio stations and schools, hunkered down against the bad weather, which they also sense is coming.

In short, the good old federalist debates revisited in André Pratte’s Reconquering Canada: Quebec Federalists Speak Up for Change and Gregory Millard’s Secession and Self: Quebec in Canadian Thought are interesting and thoughtful, but the paradigm has so shifted that there should be a product announcement at the front of the books that the stale date has passed, Quebec has left the building. The only question before us now is whether the federal system can be reinvented such that it can work both in the ROC and Quebec in an entirely different way to serve the new reality.