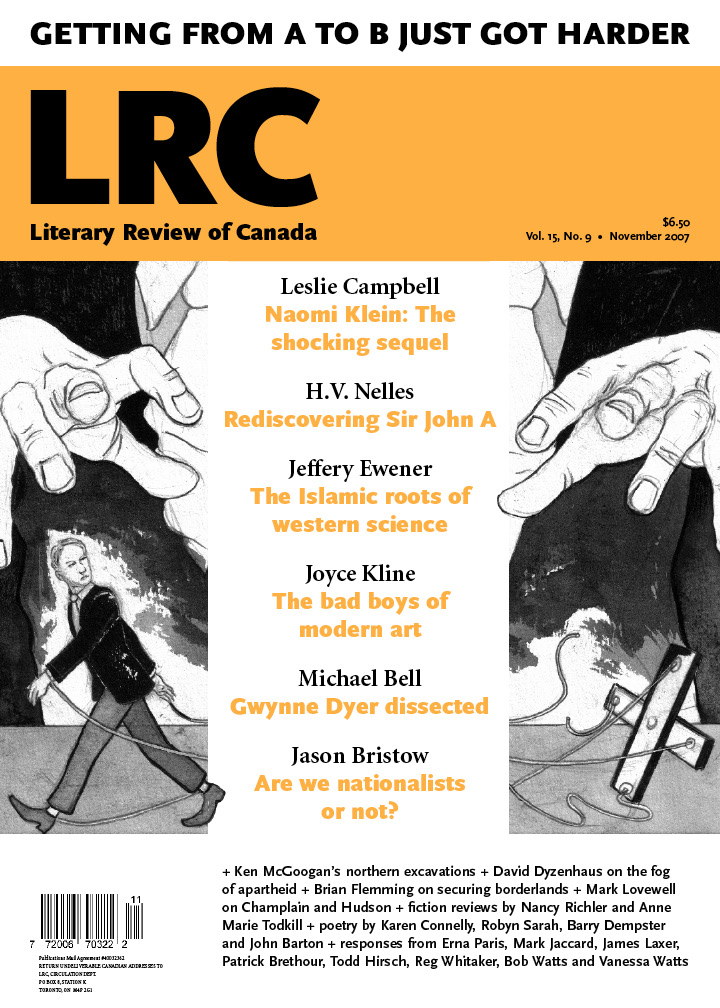 Re: “Audacious Undertaking,” by Leslie Campbell

And that’s how I felt after reading Leslie Campbell’s predictable critique of Naomi Klein’s exposé of the roots of modern neo-liberalism, The Shock Doctrine (“Audacious Undertaking,” November 2007). Klein’s book connects the dots between the rise of neo-liberal ideas in response to the failures of Golden Age Keynesianism in the 1970s and the subsequent radical remaking of policy that’s been achieved since then in most of the world. In many cases, the social and political disorientation resulting from various shocks and disasters (natural and human-made) facilitated these tectonic, rightward shifts. Yet Campbell writes her narrative off as one big incredible conspiracy theory.

I don’t know if it’s a conspiracy theory or not (just like I’m not actually sure I’m being followed), but Klein’s thesis is not only credible, she is hardly the first to state it. Of course she’s done so via a marvellously gripping, readable narrative—which explains why it will be read by infinitely more people than the dry economic charts I’ve been using for years to tell exactly the same story.

The 1970s weren’t actually a bad decade for workers: despite rising inflation, real wages grew and public services were expanding. But they were a disaster for capitalists: both financial and industrial. Financiers saw their real wealth implode thanks to plunging stock and bond prices. Real employers hated the feisty attitude they encountered from workers raised in a generation of full employment. They joined forces in the 1970s, facilitated by right-wing think tanks and strategy institutes, to engineer an immense, historic U-turn in the entire direction of economic, social and political development. Feistiness was deliberately replaced with fear, prosperity with precariousness.

The Paul Volcker interest rate shock in 1978 was the first cannon shot of the new era, followed closely by the elections of Margaret (“There Is No Alternative”) Thatcher and Ronald Reagan. Globally the agenda has been enforced through multilateral institutions, ideological dominance and, occasionally (as in Iraq), through the barrel of a gun.

This is historical fact, and Klein’s book reviews it and explains it with exhaustive references. However, for a soft left-liberal like Les Campbell (who’s played an important role in the migration of Canada’s NDP to what can only be described as the radical middle of the road), Klein’s meta-theory is no doubt highly uncomfortable. It challenges the incrementalist, exclusively electoralist strategy that guides his party today: namely, to accept 95 percent of neo-liberalism (including most of what Stephen Harper is now putting on the table, courtesy of Jack Layton’s 2006 electoral manoeuvres), and then pretend that electing a few more NDPers to Parliament will somehow make it all more tolerable.

Klein’s analysis demands a more holistic, ambitious and no doubt difficult left response: we need to understand just how fundamental the remaking of global society under neo-liberalism has become, and we need to match that with equally dramatic resistance and an equally far-reaching, but hopeful, vision.

Not being a long-time reader of the LRC, I find it difficult to tell whether your editors choose reviewers on the basis of their qualifications or on their promise to be provocative.

If it is the former, the LRC regularly comes up far short. It is difficult to see what insight ideologues like Ezra Levant (“Fantasy Foreign Policy,” October 2007) or Leslie Campbell (“Audacious Undertaking,” November 2007) brought to the books you assigned them. If it is the latter, you’re doing a fine job but failing your readers.

Even when the LRC does pick someone with an understanding of the issue at hand, like the University of Windsor scholar Michael Bell’s review of a book on the Middle East (“The Apocalyptic Eschatologist,” November 2007), it is interesting what comes of it.

Isn’t it interesting that bigotry toward Arabs and Muslims is so pervasive in our society that someone like Mr. Bell can lament the Arab “absence of a work ethic” in a leading journal? Is such casual racism so common your editors fail to notice it?

Re: “The Politics of the Ordinary,” by David Dyzenhaus

I am writing this response to David Dyzenhaus’s thoughtful review of my South Africa memoir, Ja, No, Man: Growing Up White in Apartheid-Era South Africa (“The Politics of the Ordinary,” November 2007) from my hometown of Johannesburg. I am staring at memories that Professor Dyzenhaus, himself a Jo’burger, and I share: a ha-dee-da pecking at the lawn, the bright red of a bougainvillea, a pristine blue swimming pool, a black workman clipping bushes. Where our experiences differ is in the eras in which we came of age: Dyzenhaus is a child of the 1960s and ’70s; I was born of the 1980s. This was a time when the apartheid regime was simultaneously crumbling and strangely perfect: the tiny laws and sub-laws of institutionalized racism had formed a society in which hatred was no longer a moral defect, but a legal imperative.

Dyzenhaus wonders, “how then … was it possible for Poplak and his family to live such an ordinary life? He considers political apathy to be a political choice, and while it is indeed one, I always considered this to be a far more complicated issue under apartheid. His otherwise close reading seems to have missed what I consider to be the central tenet of the apartheid regime, and my book’s theme: “The true genius of a system like Apartheid is that it renders the horrific commonplace. Under a regime like this, it takes an enormous act of the imagination to envision anything other than the status quo.” Empathy is an act of the imagination. We lived in a country free of it.

This is the world that I tried to render—a world of banal, suburban evil, in which 13-year-old boys did not possess the moral imagination to be fully human. Dyzenhaus considers this political. It is. But the aim of my book was to render the results of the political choices we all made, unmade or did not make.

These days—because I still occasionally work as a writer in South Africa—I have trouble viewing apartheid as anything but a human tragedy on a massive scale. On this, Dyzenhaus and I no doubt agree. Our views diverge on Rian Malan’s My Traitor’s Heart; he considers the book “a sensationalist account of a South Africa doomed to tribal warfare between the white Afrikaners and the black African tribes.” Perhaps. But it is also a shout of agonized—and very human—rage. I’m not so sure Malan had a clear message; his journalism still grapples with the slippery, gore-drenched reality of his homeland.

And because there is still so much grappling to do, I argue in my foreword that apartheid should not be used as a catchall analogy for regimes that institutionalize racism. Apartheid’s legacy lives and prospers—in South Africa. “Surely,” writes Dyzenhaus, “those who suffered under apartheid or who are suffering under oppressive regimes today … have the right to speak for themselves?” I couldn’t agree more, and apartheid should and must explain other, similar regimes. I’d just rather not see the term suffer from the rampant analogitis that frames so many political “debates” these days. If apartheid is the result of a lengthy historical process, then let’s be specific about it, and leave it in place. My greatest fear is that the term will be leached of its historical specificity, and thus make apartheid-era South Africa a place that is impossible to imagine.

Re: “The Bad Boys of Modern Art,” by Joyce Kline

Joyce Kline’s review of Allan Antliff’s Anarchy and Art (“The Bad Boys of Modern Art,” November 2007) reminds me that art history is mostly about “the boys” in the Euro/U.S. conceit of modern art. I agree with Kline’s statement of wanting more. Yep, more about the contribution to this anarchy by female artists, which—for them at any time—would be breaking double the rules.

Dada, which actually started in Zurich and Berlin, not America, in 1916, had mommas. A few of them. Their events took place at Alfred Steiglitz’s New York gallery, which is where Marcel Duchamp and Picabia met Man Ray. Georgia O’Keefe, Steiglitz’s wife, was part of that, and I like to think of her as the Father of American modern art … she was the absolute first to take a singular image and make it huge. Flowers, skulls, whatever. Before that, painting was all about historical battle scenes, still life, landscapes or society portraits. A much-copied rebel.

Moving on to the Surrealists, Merit Oppenheimer, who created the fur-lined teacup, was a dear friend, muse and naked model of Man Ray. Hanna Hoch, in Berlin, gave us collages in the 1930s that still look fresh today because of their startling, grotesque, intelligent bravery. Hilla Rebay was another transplanted German avant-garde painter, who influenced Kandinsky and his group of painters. I would even say he stole from her. She was the agent who introduced Frank Lloyd Wright to Guggenheim, and the result of that is the iconoclastic spiral gallery.

Lee Krasner was a muse, a partner-in-crime with Jackson Pollock, both loved by rebel-with-a-cause museum owner Peggy Guggenheim. Louise Bourgeois, who emigrated from France in the 1950s, said as much in her autobiography: “New York is a Men’s Club, and I am not included.” She quietly continued to make her art, was “discovered” at 68, and is now considered one of the masters.

Our Emily Carr, so inspired by the revolutionary French Impressionists that she took her long skirts and paint boxes from the British Columbia rainforest in early 20th century to meet them, and then did it her way. Another well-respected Canadian female was Agnes Martin, a prairie Abstractionist who only painted austere horizontal lines, refusing all imagery.

Judy Chicago, with her “Dinner Party,” dared to suggest the importance of vaginas. The male artworld generally rejected this work for two reasons: the subject matter and the customary denial of craft in modern art. Now, with more female curators, things are much improved. Professor Antliff’s timeline ends with the fall of the Berlin Wall. How many of the hundreds of artists who protest-painted that 27-kilometre travesty were female?

A book about the history of anarchy in the art world is always welcome, but let’s not forget the influence and importance of female artists.