The Dirt on Clean: An Unsanitized History

As a child, Katherine Ashenburg spent countless hours with her maternal grandmother, a cheerful, industrious German woman. Happy domestic odours of yeast and linen surrounded her, and another odour, a “smell [that] came from my grandmother herself … whom I loved, so the smell never troubled me.”

Years later, visiting Bavaria and meeting bustling German women who worked at guesthouses, Katherine Ashenburg again encountered the smell of her grandmother, now with the nose of an adult. “I knew what the smell was—the muffled, acrid odour of stale sweat—and for the first time I consciously connected my grandmother’s characteristic smell to its cause. She cleaned her house ferociously but not her body, or not very often.” To a child, the odour seemed neither good nor bad, but to the woman, raised in North America and schooled by the cleaner-than-clean strictures of our society, “I had to learn that my grandmother’s smell was not ‘good’.”

In Ashenburg’s The Dirt on Clean: An Unsanitized History, we are taken on a smart gallop through the history of personal cleanliness in the western world, and if we learn one thing on this journey, we learn that our notions of cleanliness are, to say the least, changeable. We—especially those of us living in North America—emerge as a gullible bunch, easily swayed by trends and advertising to the point that within a generation or two, smells and habits once perfectly acceptable can call forth sharp judgement, even revulsion.

Creating self-conscious shame about bodily odour was first and famously perfected by Listerine. By popularising the term “halitosis” and creating rampant insecurity about bad breath in its advertisements (why is Edna, a charming flapper, approaching “that tragic 30-mark” and “often a bridesmaid but never a bride”? Why are you “unpopular with your own children”?), Listerine singlehandedly created the mouthwash industry.

As for deodorant, probably neither Katherine Ashenburg’s grandmother nor mine, ever even heard of it, brought up as they were out of range of American advertising. But promoters of the early deodorant Odorono (Odour? Oh no!), and many others of their ilk, set out to change all that. “Within the curve of a woman’s arm,” declared Odorono’s pioneering ad for women’s deodorant in 1919, a subtle menace lurked. Advertisers followed in droves, encouraging horrid suspicions about how body odour from any given pore or orifice could “offend.” Advice writers fell in line. Ashenburg quotes Sophie Hadida, who wrote in 1932 that deodorant should coat “any part of the body that is likely to have an odor—under the arms, between the toes, around the edge of the hair, in the groin, the palms of the hands.” Hadida does not mention the vagina. That would come in the 1960s, with the introduction of chemical-laden feminine deodorant sprays.

Katherine Ashenburg has unearthed marvellously jaw-dropping material in her research. The technique for determining vaginal odour, for example, led one cosmetic company to hire a number of women who used deodorant spray as instructed. They would disrobe from the waist down, apply “nosepieces” to their vulva, and permit a “judge” to smell them over a four-day period to determine the effectiveness of the spray.

Repellently fascinating as they are, such mad modern tales face stiff competition in the historical annals of cleanliness. This is a rich, messy stew of a subject, often irresistibly yucky, and Katherine Ashenburg does it proud. The Dirt on Clean is stuffed to bursting with highly memorable stories and characters. We meet the racy first-century poet Martial, mercilessly observing the foibles of his fellow bathers in the mixed Roman baths. He derides an older woman for her body odour, how she is “green with depilatory.” We hear Montaigne, in late 16th-century France, describing “our limbs encrusted and our pores stopped up with dirt,” and learn how blocked pores were highly desirable, to seal the body from infection. We encounter Beau Brummell, in Regency London, acting against received wisdom and insisting on washing his body, not merely relying on the virtues of changing his linen.

Katherine Ashenburg corrals her intricately researched material in chronological chapters, taking us from the beauties of well-oiled athletes lightly dusted with sand, wrestling in Greek gymnasia before their cold baths, to the vast temple-like interiors of Roman baths—where love for hot water was, according to Edward Gibbon, one of the reasons the Roman Empire fell. She introduces us to the dark ages of personal hygiene, termed by French historian Jules Michelet “a thousand years without a bath” (Ashenburg reassures us this was, in reality, a mere four hundred years without a bath), and takes us through medieval bathhouses, which suffered such ill repute and fear of disease. We then encounter the famously unwashed bodies of European royalty, including Elizabeth I, who bathed once a month whether or not she needed to, and James I, who only ever washed his fingers. We step gingerly through two centuries when washing with water was done only reluctantly and rarely, and when bath rooms were considered unnecessary by the Parisian architect Louis Savot “because of our usage of linen, which today serves to keep the body clean more conveniently than the baths … of the ancients could do.”

When we reach America, everything changes. Cities appear that are planned with water and sewage systems as part of the infrastructure; a heightened interest in sanitation responds quickly to the increased fear of cholera. Where once England was the cleanest western nation, far cleaner than France or even Germany (yes, really), America takes the palm and embarks on a parabolic curve of cleaner-than-thou excesses, leaving Europeans looking downright grubby.

Although Ashenburg repeatedly refers to the notion of ritual purity and to religious influences on personal cleanliness, she shies away from closely examining the complexities of how godliness and cleanliness are connected. The challenges Jesus posed to Jewish practices of ritual purity, as evidenced in various Gospels, are mentioned only tentatively, and the subsequent shift away from personal cleanliness in the early Christian era remains largely unexplained. Several pages detail the bizarre excesses of what Ashenburg terms “the most scrupulously filthy” early Christian saints, those strange ascetics who revelled in their dirt as alouisia, a way of mortifying the flesh. While this is squirm-inducing stuff, it provokes no more than vague disgust for saints such as Radegund, who licked the sores of lepers, or Agnes, who apparently never once washed her body, and no real understanding is gained.

The final chapter of the book lacks the authority of earlier chapters, at times appearing to be a repository of leftover scraps of research. Ashenburg quotes the American writer Allen Sarkin, who draws a provocative link between terrorism and microbes: “Is it only a coincidence that the same places where Americans most fear terrorism—airplanes, schools, mass transit, water supplies and computers—they also fear germs?” This disturbing idea calls for close analysis but it is not followed through. The significant subject of non-ritual circumcision merits only an extended sidebar in this chapter, incongruously positioned immediately after a page about teeth whitening. This petering out of the book is disappointing. Such a readable and engaging romp through the history of personal cleanliness, messy though the subject is, deserved a cleaner ending.

Margaret Horsfield turned to writing after many years with the BBC as a radio reporter. She is the author of four books, including Biting the Dust: The Joys of Housework (Fourth Estate, 1997). She lives in Nanaimo, British Columbia. 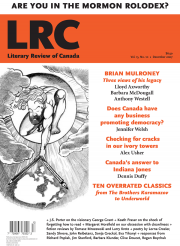