Degas: ballerina. Monet: landscape. Lucien Freud: nude. One of the measures of a great artist’s legacy is that the very mention of his or her name conjures a strong visual image. In the realm of the graphic arts the name David Levine evokes caricature in precisely the same way.

Since the early 1960s David Levine has been rendering his extraordinary pen portraits of literary and historical luminaries in the pages of the New York Review of Books as well as in Time Magazine, Esquire, The New Yorker and a host of other prestigious publications. In an era of constantly shifting artistic styles, Levine’s work has remained remarkably consistent. This unwavering stylistic focus is very much a reflection of his deep awareness and appreciation of master artists throughout history. How he found and developed his unique vision and created his stunning body of portraiture, numbering more than 6,000 drawings, is a fascinating story.

The artist was born in 1926 in Brooklyn, where his father ran a garment factory. Levine remembers his home as a politically intense environment with noisy gatherings of friends and relatives and the rooms reverberating with frequent boisterous discussions about politics, social justice and history. Levine traces his fascination with the passage of time and the complexities of history and culture back to these endless energetic debates.

His talent for keen observation and his precocious rendering skill became obvious at an early age. A nation-wide magazine contest sponsored by Walt Disney invited entrants to send in a drawing of the cartoon character Goofy. Winners would receive an invitation to come and audition for an animator’s position in Disney’s Los Angeles Studios. Levine drew his version and mailed it in. Disney quickly sent back a positive response inviting him to come to California for a tryout, but his parents declined on his behalf. He had just turned nine.

“To be mocked means that a writer is being taken seriously.” –Yann Martel

Levine’s love of drawing endured and thrived into his adolescence. When he indicated to his family that he wanted to find work as an illustrator in the burgeoning comic book industry, his parents, although supportive of the fine arts as a career, were less than enthusiastic. They agreed to send him to the Tyler School in Philadelphia where traditional studio instruction and regular access to the extraordinary Barnes collection left a lasting impact on his creative imagination. It was here that he solidified his abiding respect for the central importance of art history and the discipline of craftsmanship as indispensable resources for any fine artist, a sensibility that set Levine apart from the spirit rising at that time in his hometown. The New York fine arts scene of the late 1940s was experiencing a dramatically rising creative self-confidence and a belief that European art history was a burden to be cast off rather than emulated.

After returning to New York from Philadelphia, the young artist took his first tentative steps as a freelancer, which began with the idea of publishing a line of Christmas cards based on Charles Dickens’ A Christmas Carol. Levine’s first instinct, as always, was to research in depth the historical influences used by the English illustrators associated with Dickens. This research took Levine along a stylistic path leading back to the Renaissance and to the school of Albrecht Durer and associated northern European artists. It was this group of artists, more specifically printmakers, who perfected the crosshatching style that spoke so powerfully to Levine. The Christmas card venture was never successfully launched, but his graphic style was born.

Levine’s big break arrived early in 1963. A friend of his who worked as an editor at Esquire was impressed with his exquisitely crosshatched work and showed some of the drawings to acquaintances who were launching the New York Review of Books. The enthusiasm was shared and Levine’s caricatures quickly became a regular feature and provided the new publication with its signature look. It is these weekly drawing assignments that are the primary source of Levine’s current immense catalogue of portraits. This unrelenting regimen is also the feature that Levine feels distinguishes him from satirists such as Honoré Daumier, with whom he is so often compared: “Daumier and his circle chose their caricature subjects out of political anger and a passion for regime change. The subjects of my drawings were assigned by a NYRB editor.”

In speaking about his approach to his assignments, Levine stresses that it is a multi-level one. The first step is to study the piece he is to illustrate and to ensure that he is on the same wavelength as the author. Next comes the research, both pictorial and frequently biographical. Finally comes the creative process with all the variables of work, inspiration and sometimes luck. An example he gives is a caricature he was working on of Richard Nixon in the depths of his political crisis. Working and reworking the pencil sketch, Levine thought “I’m erasing myself into oblivion.” That’s when the lightning bolt hit and he drew Nixon himself in the process of being erased.

Levine’s approach to caricature has provided inspiration to artists around the world, including many in Canada. Terry Mosher, who draws under the pen name Aislin, recalls his early encounters with the New York Review of Books caricatures and his admiration of the rendering skill Levine demonstrated with his refined shading and crosshatching, as well as the graphic impact of the subjects’ enlarged heads. British Columbia caricaturist Kerry Waghorn, whose syndicated work appears in numerous newspapers in Canada and abroad, has also acknowledged the impact of Levine’s style. Waghorn’s Faces in the News has showcased his portraiture for 30 years.

As an editorial cartoonist whose daily inspiration comes from the frequently squalid behaviour of humanity as reported in the daily headlines, I personally look with envy at the larger world portrayed in Levine’s work. Authors, thinkers, political leaders and historical figures are captured with an elegant grace that places them in something greater and more lasting than their own historical time span.

It is precisely this disciplined four-decade continuum that has given Levine’s work its calm authority. There is a complete absence in his drawings of the low-level hysteria to which political humour frequently succumbs. It comes as no surprise to hear Levine, in discussing his compositions, reveal that he often uses the poses of classical sculpture as references for his drawings. Small wonder that his elegant pantheon of historical and literary notables possesses such a timeless sensibility.

In describing Levine’s artistic accomplishments, John Updike refers to his “watching presence, an eye informed by an intelligence that has not panicked” and concludes by saying “in a confusing time, he bears witness. In a shoddy time, he does good work.”

Brian Gable has worked as an editorial cartoonist for The Globe and Mail since 1987 and lives in Toronto. He appeared in conversation with David Levine at the Ontario College of Art and Design in Toronto on September 25, 2008. 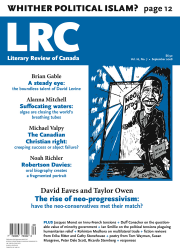