We wanted spirituality on other days than Sunday
So we made our homes in shacks and domes on the shores of the Bay of Fundy
We lived in ruins, in huge communes where no one did the dishes
We lived in huts and froze our butts, and fed ourselves on wishes
We lived in shacks and broke our backs to keep ourselves from freezin’
We lived on hope and grains and dope and vegetables in season
We needed dough … so we kneaded dough
And shovelled snow at ten below
We wrote our poems and chanted oms
And canned our food and gardened nude
And planted pot and danced a lot
And tried again and sat zazen
And every spring we threw I Ching
And ran up tabs, and got the crabs
And shared our hope, and shared our dope,
And shared our hearts, and soybean farts …
We may have gone to one or two extremes
But for a while we shared a couple dreams…
—“North Mountain Crazies” by Spider Robinson

Mark Frutkin and I are both writers born in America in 1948 who came to Canada in the 1970s, while the Vietnam war was still in progress, to live in a commune, and there taught ourselves to write.

He and his friends called their 200-acre spread in remotest Quebec The Farm, apparently quite unaware that one of the largest and most successful communes in North American history—then numbering 650 hippies on 1,000 acres in Summertown, Tennessee—was already using the name. (And still is.) My own mob in Nova Scotia, the Arlington Road Bunch, considered ourselves a “satellite farm,” although only one of us had actually lived at the Tennessee original and met its remarkable founder, Stephen Gaskin.

Similar “far out, man!” moments of perhaps inevitable synchronicity kept occurring as I read Erratic North: A Vietnam Draft Resister’s Life in the Canadian Bush. Frutkin notes, “one book that had a profound affect on me in those years was Zen Mind, Beginner’s Mind by Shunryu Suzuki, a Japanese Zen Buddhist monk who moved to California in the Sixties. Reading this book was for me the beginning of a lifetime of study and practice in Buddhism in its Tibetan and Zen versions.” That is the first and last time Buddhism is mentioned in this book. (“Of all religions quite the best/one rarely meets a Buddha pest…”)

So many parts of Erratic North resonate for me. City kid learns to use an axe … an outhouse … a woodstove.

Suzuki-Roshi would have approved. I know this because I’ve been married for the past 34 years to a Soto Zen monk ordained in his direct lineage. (I’m not Buddhist myself; I use Irish whisky.) Jeanne—or Buchi Eihei, as they call her around the zendo: “Dancing wisdom, eternal peace”—was handed her first copy of Zen Mind, Beginner’s Mind by … can you see it coming? … by Stephen Gaskin, while she was living on his farm in Tennessee. She brought it back up to Nova Scotia just about the time I moved there from New York, looking for her.

So many parts of Erratic North resonate for me. City kid learns to use an axe … an outhouse … a woodstove. Learns for the first time how actual food actually tastes, and how many stars there are in a clear night sky. Finally has time to get some reading and thinking done. Gets driven insane by the fucking blackflies …

But just as striking as the similarities in Frutkin’s 1970s and my own were the ways in which they diverged.

Sex and drugs are rarely even indirectly mentioned in Erratic North, for instance. The only entheogens mentioned at all are pot and hash.

Like most of the Americans who migrated north in the late 1960s and early ’70s, Frutkin was a draft dodger. In his case it was a family tradition: some of the most fascinating and powerful sections of Erratic North recount how his grandfather Simon Frutkin fled Belarus in 1896 at age 18 to escape the czar’s draft. I would have been a draft dodger myself, but the question never arose. I was a born 4-F, who simply came up to Nova Scotia to visit friends for a few weeks, and fell goofy in love with the whole country. Frutkin stayed with his commune for ten years; mine had thrown me out within three. My strongest memories of that place and time are of meeting and falling in love with Jeanne; Frutkin briefly mentions a first wife who intersected in some way with his commune years, but I don’t know how they met, how long they lasted or what went wrong. Fair enough: those things are not part of the story he chose to tell here.

We both became better writers by seceding from the world, living without TV, radio, telephone or newspaper.

I confess he and his friends make me and my own mob seem like a bunch of wimps. We talked about going back to nature, living as our ancestors had … but we did so riding pickup trucks and tractors, wielding chainsaws and Rototillers, supplementing our wood-burning stoves with Kemac oil-burning stoves while we slept—hell, one of our three dwellings, Moonrise Hill, had electricity, and running water, if you pumped hard. All three shanties were crowded even (especially!) in winter; we had so many neighbours that if you stood on the roof you could see the chimney smoke of the nearest, and we knew every detail of the lives of every one in a 30-kilometre radius. Frutkin spent long periods in total isolation, with little but an axe, an outhouse and a spring-box, and he speaks mostly of two neighbours, one rarely seen and the other rarely heard. I play guitar, he plays harmonica, which makes us different species.

No, here’s how different we are: during the ten-year period in question, he literally burned every word he’d ever written. Three times. I’ve never thrown away a word until I’d exhausted every possible paying market, twice. But we both became better writers by seceding from the world, living without TV, radio, telephone or newspaper. His 2006 Fabrizio’s Return richly deserved its Trillium and Sunburst awards and other honours, and this memoir is equally lyrical and informed.

Another notable difference between his farm and my satellite farm, of course, is that his still exists.

We grew our corn, our kids were born, and just as we got started
It all got old—we all got cold, and one by one, departed
And there may not be a hippie left on the goddam Fundy shore
Or it may be true there’s still one or two, but there can’t be many more
And we don’t write much, but we keep in touch in a casual kind of way
We pass the word, and last I heard we was all gettin’ by okay
We mostly found our way around the things we were afraid of
The Mountain taught us what we sought: we know now what we’re made of

Our kids are grown, our ages showin’, our memories gettin’ faint
But I’m mighty glad for the times we had, and I won’t pretend I ain’t
The memories will bring me ease when it’s time to push up daisies
I had my fun: I once was one of the great North Mountain Crazies
—“North Mountain Crazies”

Jeanne and I have lived for over 20 years now in British Columbia. The last time we returned to Nova Scotia, a few years ago, we could find absolutely no evidence that Moonrise Hill had ever existed. We could not even agree on where the house had once stood, let alone the garden that had fed us all, or the spot where we were married. Nor was one ex-American of our vintage still around, so far as we could learn.

All the native Nova Scotians we’d known—God, they were kind to us!—were exactly where we’d left them. Even the ones who’d died.

On the other hand, we also saw more than a few young hippies homesteading in out-of-the-way spots on the North Mountain, and they looked as happy and proud as we remembered being. Our other two dwellings, being deeper in the woods than Moonrise, still stand, and both were clearly being used as meditation retreats, so there must still be a hippie grapevine. Nova Scotia itself is still one of the most beautiful places I’ve ever seen, protected from developer exploitation and overpopulation by its invincible shield of horrid weather—as, I expect, is Frutkin’s part of Quebec. Like him, I’m still in touch with nearly all the people I loved back then.

I hope he will write much more about them in future. And I hope we get to jam together one day.

Spider Robinson’s collaborators include Jeanne Robinson (The Stardance Trilogy, Baen, 2006), the late Robert A. Heinlein (Variable Star, Tom Doherty Associates, 2006) and David Crosby (“On the Way to the Stars”). A 1960s survivor just entering his sixties, Robinson wrote the introduction for Stephen Gaskin’s Amazing Dope Tails: Haight Street Flashbacks (Ronin Publishing, 1980). His podcast Spider on the Web can be downloaded free from either iTunes or www.spiderrobinson.com, and a video of his wife, Jeanne, experimenting with dance in zero gravity can be seen at www.stardancemovie.com. 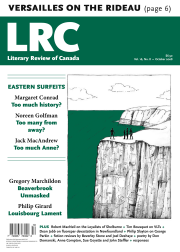