Art and Politics: The History of the National Arts Centre

When veteran arts administrator Elaine Calder agreed to act as a temporary manager at the National Arts Centre in 1998, the place was in crisis: the Ottawa institution was running an unexpected deficit and had fired two CEOs in four years. On her arrival, Calder met with her development officer to check that at least a $1 million gift from hockey player Alexei Yashin was secure. The unsettling answer was “not exactly.”

There followed the Yashin affair. The generosity of the Ottawa Senators hockey player had made headlines around the world, but his gift was contingent on the NAC hosting Russian performers and paying fees to his parents to act as consultants in that area. Calder and her board got legal advice that the donation would breach Canadian tax law and, when attempts to amend the agreement with Yashin failed, they had the unpleasant task of going public with the news that the remaining $800,000 of the gift had evaporated.

But the result of another embarrassing crisis at the arts palace on the Rideau Canal was unexpected: there was an outpouring of support, and donations soon doubled the $1 million figure Yashin had promised. The cheques came from every province in Canada, proving that the institution’s oft-doubted national influence was very real. The NAC had pulled a snowy-white public relations rabbit out of a very black hat.

Connections to power, especially Liberal power, have always been crucial at the NAC.

That kind of roller-coaster ride seems to typify the history of the NAC, painstakingly researched and dramatically revealed by Ottawa journalist Sarah Jennings in the highly readable Art and Politics: The History of the National Arts Centre. The book marks the centre’s 40th anniversary: in a sleepy Ottawa of touring companies and church concerts, the performing arts centre was proposed as a centennial project. It was conceived by its founding director Hamilton Southam, the wealthy diplomat and son of the newspaper family, not only as a desperately needed professional performance space, but also as a living arts centre animated by resident companies. It opened, after many delays and budget overruns, in June 1969.

For those of us who nostalgically remember its glory days and rued the government budget cuts that Donald MacSween, Southam’s able successor, was forced to preside over, it is interesting to note that the vision of national scope and artistic excellence in five disciplines (music, opera, dance, English theatre and French theatre) outstripped the cash right from the start. Southam’s greatest asset was probably his ability to get face time with Prime Minister Lester Pearson. Connections to power, and especially Liberal Party power, have always been crucial at the NAC. The tactical MacSween learned to entertain politicians, too, but he was handed a mandate larger than shrinking grants.

So Jennings’s lively account is no official history of 40 years’ triumphant progress. She must be a particularly seductive interviewer, for she not only has the details of the Yashin affair, but she also has the dirt on the abrupt departure of Yvon Desrochers, the controversial CEO who led the NAC after MacSween, saw its treasured orchestra go out on an unprecedented strike in 1989 and welcomed the band back only to send it on tour to make room for a rental production of The Phantom of the Opera in 1991. The increasingly autocratic Desrochers was asked to resign by a board in open revolt against its own chair, Robert Landry, who still supported Desrochers.

Jennings is a journalist who knows reporting beats rhetoric; she is harder on Desrochers than on any other of the controversial characters who appear here, including current NAC music director Pinchas Zuckerman, but never unfair. While media reports on the Yashin business may have left the impression the hockey player was looking for kickbacks, Jennings carefully explains how the misunderstanding occurred and how the hurriedly announced donation could have been legitimately processed if Yashin had established a charitable foundation with his parents as its stewards.

Desrochers, meanwhile, is probably best remembered as a man with an idée fixe: that television would save the increasingly cash-strapped centre during the Mulroney years. His proposal to beam live high-definition performances to arenas in smaller communities was widely derided by arts observers (including this one) in the days before HD technology was commonplace. Today, as the Metropolitan Opera packs them in at your local Cineplex, we all have to acknowledge that Desrochers was more visionary than madman. On the other hand, it is to the lasting shame of the NAC and the CBC that in-fighting killed all attempts to get them to cooperate on an application to run a publicly funded Canadian arts channel, leaving the door open for the private sector channel Bravo! in 1994.

Canada is great at establishing institutions but less good at maintaining them.

It was a broadcasting consultant named Peter Herrndorf who warned the NAC that Desrochers’s HD plan was unworkable because only highly unusual content would draw the necessary audiences: the few shows he could think of as obvious candidates were closed-circuit boxing matches and the Met’s operas. And, of course, it is now the wisdom and energy of the prescient Herrndorf that has renewed the NAC. Besides giving his unquestioning commitment to his various artistic directors, after years of board interference with managers, Herrndorf has cleverly used a series of rotating regional festivals—the Atlantic Scene, the Alberta Scene, etc.—to fulfil the NAC’s national vision more effectively than ever before.

But is that vision realistic? Warranted? Useful?

Jennings is not a critic. Although she clearly explains the stylistic implications of Zuckerman’s leadership for the orchestra, she tends to paint all NAC artistic efforts as equally worthy with only the occasional acknowledgement of the more obvious flops. That even-handed approach overlooks the extent to which NAC artistic directors have to compromise to win Ottawa audiences who have always embraced the orchestra and heavily subsidized operas, but have been more fickle in their support of theatre and dance. During her crucially stabilizing tenure from 1997 to 2006, English theatre director Marti Maraden initiated co-productions with other Canadian theatres and offered solid renditions of accessible plays. Artistically, there is a huge difference between that approach and her successor’s. Peter Hinton, a more daring choice for the NAC, has tried to rebuild a resident company and began with the ambitious idea of an all-Canadian season. His recent retreat to a safer 2009-2010 season that includes productions of A Christmas Carol and The Drowsy Chaperone highlights how difficult the balancing act can be and how painful the compromises (although this book can only cover his tenure in its epilogue).

The larger issue, however, is the difficulty of maintaining a national performing arts institution outside a major metropolis. Jennings makes passing references to the many Canadian tourists who visit Ottawa in the summer; she notes the NAC is based on the European model of an arts centre directly funded by the central government; she reports on the criticisms of elitism that began to take hold in the 1980s. But she does not use this context to initiate a philosophical discussion of the NAC conundrum: a national institution with a local audience.

Canada is great at establishing institutions but less good at maintaining them, while Canadians tend to have short memories when it comes to their predecessors’ achievements. Jennings has done a big service to all who care about the arts in Canada by offering this powerfully reported history, but she could have amplified it by explaining why the NAC matters. After all, not every reader is going to be as easily convinced as this one: it was my intense teenage cultural experiences, including NAC theatre productions during John Wood’s tenure as director of English theatre in the late 1970s, that convinced me daily life was lived more fully and national identity shaped more intelligently through the arts.

Kate Taylor writes about film and culture for the Globe and Mail. Her most recent novel, Serial Monogamy, is now available in paperback. 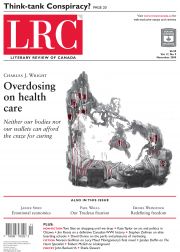