Canadian Maverick: The Life and Times of Ivan C. Rand

Who was Ivan Rand, who was born in 1884 and died in 1969? Does anyone, apart from the legal history cognoscenti, have the foggiest idea? The lawyer and judge seems like just another bygone establishment figure who quickly faded into obscurity once dead. And yet, William Kaplan—well-known lawyer, arbitrator and author—has written a hefty biography of this historical has-been. This is doubly strange, since Kaplan appears to disrespect and dislike Rand.

Despite the unpromising underpinnings of Canadian Maverick: The Life and Times of Ivan C. Rand, this curious book is interesting and provocative. Much of the reason is Kaplan’s struggle, explicit on almost every page, to decide what Rand was. A flawed hero? Or just flawed? A figure of substance, with an important legacy? Or eminently forgettable? Wildly contradictory assessments of the man and his career litter the biography. This gives it a certain fascination. (I should also say that Kaplan writes well, and take pains to convey historical context.) Ivan Rand had a pretty good career, as these things go. After practising law in Alberta and his home province of New Brunswick, he went into politics and served briefly (1924–25) as New Brunswick attorney general in the Liberal government of Premier Peter Veniot. Defeated at the polls in 1925, Rand got a job as regional counsel for Canadian National Railways. In 1943, by then top man in the CNR’s huge legal department, Rand was appointed a judge of the Supreme Court of Canada by Mackenzie King, serving on the bench until he reached the mandatory retirement age of 75 in 1959. At various times, he was also a labour arbitrator and royal commissioner, and in 1947 served as Canadian representative on the United Nations committee considering the future of Palestine. Rand was founding dean of the University of Western Ontario’s law school (1959–64).

Kaplan describes Rand as a “hero,” “great civil libertarian,” “Canada’s greatest civil libertarian judge” (twice) and someone who had “a great and worthwhile life.” But this is no hagiography. Of Rand as politician, Kaplan says that he was “averse to compromise, redundant explanations, small talk, shaking hands, and campaign promises.” As family man (Rand was married and had two sons), he was “often sullen, remote, uncommunicative, detached.” As Supreme Court judge, he was “a one-man band” whose “reasons for judgment were not generally accessible and often quite obtuse.” His complicated partition plan for Palestine, put forward as a member of the UN committee, was “unworkable, inconsistent, and unfair.” As law school dean, Rand had “a complete lack of understanding of his role and duties as the head of an academic institution” and became “yet one more dull, mediocre, traditional dean.” As a royal commissioner investigating the case of Leo Landreville, a judge accused of improper financial dealings, Rand “did not understand that there is a difference between an inquiry and an inquisition”; the process “was a disgrace.” His 1967 royal commission report on labour disputes was “an extreme and absurd response” to the problem, which “completely missed the mark.” Even his vaunted Supreme Court judgements on civil liberties were “to some degree motivated by a dislike of Roman Catholics and French Canadians.” Kaplan calls Rand “an intolerant bigot” who could be “personally self-centred, narrow-minded, intolerant” and concludes that “his first-rate mind accompanied a third-rate temperament” (reversing Oliver Wendell Holmes’s famous description of Franklin Delano Roosevelt as someone with a second class intellect but a first class temperament).

Kaplan is amusing and insightful in his account of Rand’s deanship of Western’s law school and why he was unpopular (I was an unpopular dean there myself, from 1979 to 1983).

Kaplan says he began work on the biography 20 years or so before it was published. Two decades of living with someone you dislike so much! But Kaplan seems to forgive all that, because of what he considers Rand’s important role in inventing something called the implied Bill of Rights. The Supreme Court pulled this rabbit out of the hat (according to Kaplan) in the Jehovah’s Witnesses cases from Quebec—Boucher v. The King (1951), Saumur v. The City of Quebec (1953) and Roncarelli v. Duplessis (1959). In Boucher, the law of sedition was found inapplicable to the handing out of religious pamphlets. Saumur denied a province or municipality the right to prevent the handing out of these pamphlets. Roncarelli vindicated a restaurateur whose liquor licence was cancelled because he provided bail to a large number of Jehovah’s Witnesses charged with a variety of offences. But Kaplan’s praise of Rand and the court for these decisions is unconvincing. Few modern legal scholars attach much significance to the so-called implied Bill of Rights. Few would agree that Rand’s role made him a hero. Kaplan himself concludes that “the concept of an implied Bill of Rights was always dubious” and “could not be constitutionally sustained.”

The 1946 “Rand formula,” which solved a delicate problem of industrial relations, offers a better claim for remembrance and praise. How could a union be provided with financial security without forcing all employees in the work place to be union members? This was a key issue in the massive and violent 1945 strike of Ford Motor Company employees at the Windsor plant. Rand arbitrated the dispute. His eponymous formula required everyone to pay union dues, collected and remitted to the union by the employer (the “compulsory check-off”), whether or not they were members of the union. This seemed fair, for it ensured that no employee could opt out of the union to avoid dues while enjoying the benefits of the union’s activities. The Rand formula is now a staple of Canadian industrial relations, legislated in a majority of provinces and part of the Canada Labour Code. Kaplan calls it “singular, inventive, and creative … It was brilliant.”

Rand’s last big job was dean of the University of Western Ontario law school. He left in 1964, but was still remembered, although not fondly, when I joined the school in 1977. Kaplan is amusing and insightful in his account of Rand’s deanship and why he was unpopular (I was an unpopular dean there myself, from 1979 to 1983). “He could never comprehend why some of the faculty behaved as they did: they avoided exercise and they smoked and drank—often to excess.” The legacy he left at Western was as dubious as the implied Bill of Rights: “From Rand’s day forward, disrespecting and destabilizing the dean became the number one faculty sport in the law school.”

One point in Rand’s biography needs correcting. In a footnote, Kaplan writes that Supreme Court Justice Wilfred Judson “was among the most miserable of men and made the Ontario Court of Appeal judges of his day seem like gentlemen, which was quite a feat.” This is unfair. I was Judson’s law clerk for a year (1969–70). Yes, Judson was a dour man (as a one-time Latin teacher from the north of England, how could he have been otherwise?), but in my experience was kind and thoughtful. He may even have been a nicer person than Ivan Rand. 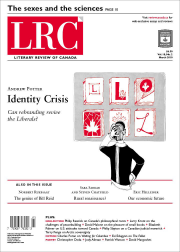