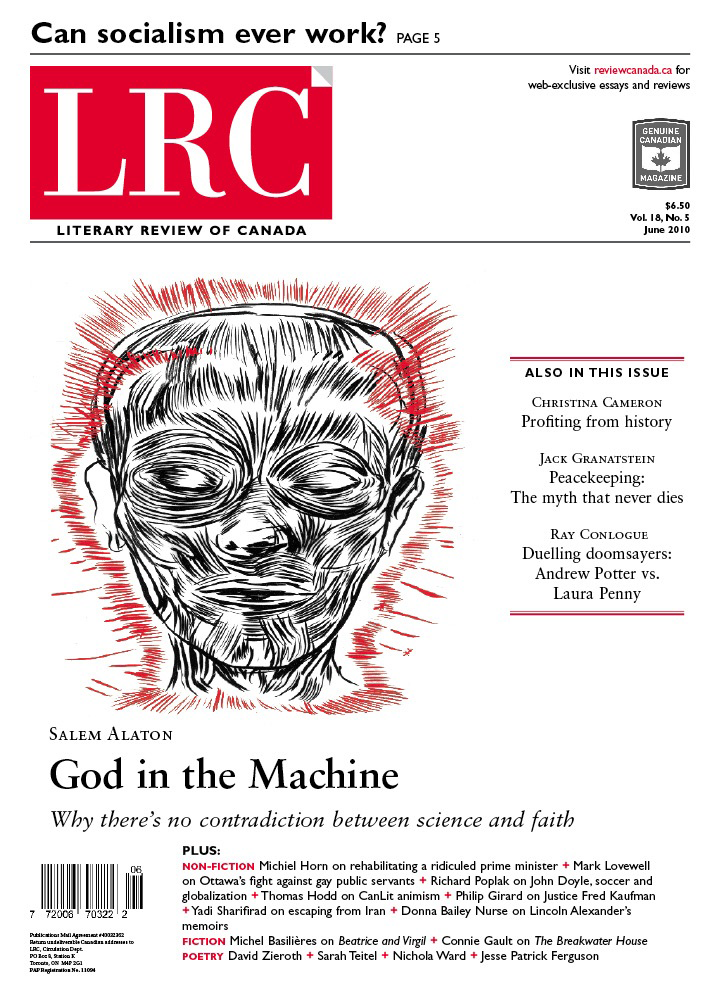 Re: “Darwinists and Divinity,” by Salem Alaton

Salem Alaton’s urbane and allusive review carefully avoids taking sides on any of the issues raised by Michael Ruse’s book. Perhaps that is intended as a stylistic homage to that book’s argument, for Ruse’s claim is precisely that one doesn’t need to regard science and religion as radically incompatible. But that is itself a definite view, and it’s a pity that Alaton makes no attempt to evaluate it.

Ruse, like Stephen J. Gould before him in his 1999 Rocks of Ages: Science and Religion in the Fullness of Life, wants to make room for religious answers to questions that science can’t answer. These questions include questions of value, and also some that belong to traditional metaphysics, such as why there is something rather than nothing. These are significantly different questions. Questions of value concern what we should care about. Answers can’t follow from any simple set of scientifically ascertainable facts, but they can be debated in rational ways. Religious answers to questions of value, however, typically adduce justifications that rest on alleged facts. Why can’t science investigate those? Alaton writes that we “can hardly use science to refute the Resurrection.” He means, I suppose, that since the Resurrection is a miracle, it must by definition constitute something that science shows to be impossible. If so, however, the problem isn’t that faith goes “beyond” the evidence; it’s that in many ways it goes against the evidence. Indeed, as Mark Twain put it, faith is believing what you know ain’t true.

As for metaphysical questions, it’s true that not everyone agrees with the logical positivists in finding them nonsensical. We can feel them to be meaningful. But not all our feelings are trustworthy. The reason science can’t answer them is not that they demand different methods of investigation. It’s that answers provided by different religions are mutually incompatible, and that an inclination to believe them, inculcated at an uncritical age, is the only support they can muster. The psychological possibility of believing both scientific and religious claims is attested by the fact that many people do so. But that doesn’t show them to be rational. Ruse’s own position is firmly atheistic, and his tolerance goes not much further than his declaration of resignation that eliminating irrational beliefs “isn’t going to happen.” That shouldn’t be of much comfort to irrationalists.

Re: “An Unpopular PM Revisited,” by Michiel Horn

I was honoured to hear that Professor Michiel Horn had read my biography of R.B. Bennett and pleased when invited to respond to his comments. Let’s begin with the quibbles.

First, my intention was to create a single-volume biography of scholarly merit but for the general reader. Thus, decisions were made as to when points regarding the man and his times had been adequately made and when additional illustrative examples would prove superfluous. Horn cites a couple such examples; I could list more. Conversely, I’m afraid that he declared absent many ideas and events that are indeed discussed. Most blatant among them is the detailed examination of Bennett’s efforts in Quebec prior to the 1930 election.

Second, Horn is an experienced and exceptional historian so I know he understands that my not padding the bibliography with every source consulted or my not echoing particular arguments does not mean that I failed to read or consider them. Once again holes are confused with decisions.

Horn’s primary concern, however, seems to involve his taking up a debate he began with J.R.H. Wilbur way back in 1969 when that esteemed scholar made the case for Bennett as a reformer who moved the Conservatives to the left of the Liberals. In 1991, Larry Glassford’s analysis of the party under Bennett’s leadership added strength to Wilbur’s thesis. My research, which traipsed me through all of the old sources to which Horn refers in his review and myriad more current scholarship, led to my supporting and hopefully adding depth and nuance to Wilbur and Glassford’s views.

I located Bennett’s core political ideas in his Wesleyan upbringing and admiration for Britain and its Tory leaders. The congruent ideas informed decisions made throughout his life and career, including adopting Keynesian ideas to fight the Depression. Of course he took actions that Keynesians would decry, but the point is that Bennett moved Canada toward a new collective consensus and that Mackenzie King came late to the party. The Liberal’s arrival was seen, and Bennett’s enduring influence cemented, with King’s embracing left-leaning, Keynesian policies and advancing Canada’s journey toward a more activist role for government—just as Bennett had long envisioned.

Horn says my book is not the definitive Bennett biography. I cheerfully agree. Arguments about something as intriguing as the Depression and someone as complex and remarkable as Bennett should never end.

Re: “A Persistent Myth,” by J. L. Granatstein

Jack Granatstein has been contemptuous of peacekeeping for at least four decades. In theory, this made him the perfect choice to review two books about United Nations missions in the 1950s and ’60s. But the retired professor could not resist the opportunity for some more historical revisionism—and it’s time to call him on that.

Granatstein perpetuates the myth that Canadian prime ministers from Lester Pearson onward saw peacekeeping as a cheap alternative to war fighting and peacemaking. He conveniently forgets that Canada was heavily involved in NATO and NORAD throughout our peacekeeping period, and that Pearson himself did not shy away from peacemaking, as a quotation from him, dated November 2, 1956, on the side of the peacekeeping monument in Ottawa shows: “We need action not only to end the fighting but to make the peace … My own government would be glad to recommend Canadian participation in such a United Nations force, a truly international peace and police force.”

The words are from Pearson’s speech at the beginning of the UN General Assembly’s emergency session on the Suez crisis—a crisis from which Granatstein asserts the then foreign minister emerged as an accidental and overblown hero: “books written in other countries scarcely mention Pearson’s part, and the leading scholar of peacekeeping, the Briton Alan James, has said that ‘the degree of credit … may have been a trifle excessive,’ Pearson more or less bumping into the U.S. representative at the UN who was looking for someone acceptable to sponsor his draft resolution. It might have been a Brazilian; instead it was Mike, and thus history was made.”

For the record, here is the full text of the relevant paragraph written by James (in a review, incidentally, of the same book by Michael Carroll that Granatstein then wrote about for the LRC):

It is not my intention to cast doubt on Pearson’s huge efforts in that direction, but I do throw out the idea that the degree of credit he has been given may have been a trifle excessive. When the General Assembly first called for a cease fire, Canada abstained, arguing that the resolution was insufficiently positive: it should, Pearson said, also have made provision for a UN force to maintain the peace while a long-term settlement was being worked out. Carroll tells of Canadian diplomatic efforts towards this end; of Pearson being asked by Henry Cabot Lodge, the American representative to the UN, if he would sponsor a draft resolution prepared in the State Department; and of him successfully presenting a virtually identical draft to the Assembly. This called for a force to “secure and supervise the cessation of hostilities”—a less ambitious scheme, it will be noted, than the one Pearson had originally wanted. To my mind this series of events does marginally qualify the picture of Pearson as UNEF’s [United Nations Emergency Force] sole creator. And I think the same conclusion is pointed to by something Carroll does not mention: that Lodge says he was asked by the State Department simply to find someone suitable to sponsor its draft. He thought of Canada and Brazil, and happened first to bump into Pearson. Evidently neither State nor Lodge thought of Pearson as the absolutely essential man if a UN force was to be mounted. This, to my eyes, makes Pearson’s depiction as the hero of the hour look a little bit fortuitous.

Note James’s acceptance of “Pearson’s huge efforts,” of Canada’s abstention on the first resolution because “it should, Pearson said, also have made provision for a UN force to maintain the peace,” and of “Canadian diplomatic efforts towards this end.” And note James’s careful effort to prevent his qualifications from being blown out of proportion, using words such as “trifle excessive,” “marginally qualify” and “little bit fortuitous.” James does rightly point out that Brazil could just as easily have sponsored the final resolution, but it was Canadian diplomacy that led to the Americans drafting the resolution. James—and legions of other scholars—give considerable credit to Pearson on this point. It was mainly for these efforts that Pearson received the 1957 Noble Peace Prize.

The Canadian’s pivotal role is confirmed by the date of the quotation on the peacekeeping monument. Pearson was publicly advancing the idea of a UN mission on November 2; the resolution drafted by the State Department was put before the General Assembly on November 5. Three days are a very long time during a crisis between nuclear-armed powers—as Granatstein well knows.

I can understand a conservative scholar resenting the fact that the progressive Pearson was a genuine hero. But personal resentment—or envy—is no excuse for trying to rewrite the past.