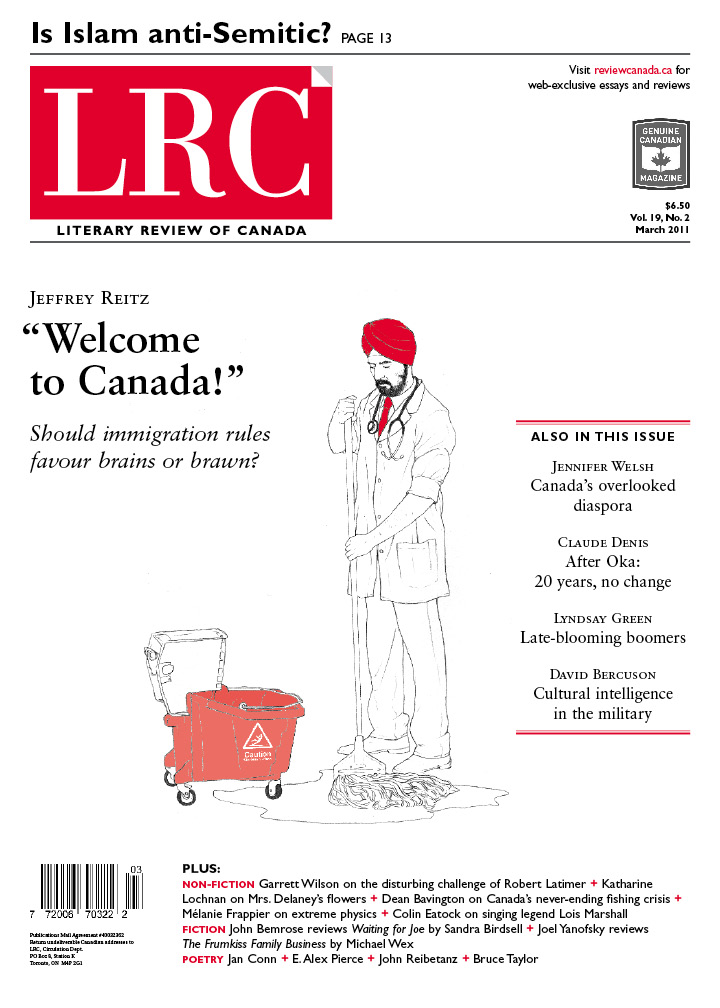 In his essay, Jeffrey Reitz examines the question of why highly educated newcomers continue to do so poorly in the Canadian labour market. He notes quite rightly that the federal government’s recent rapid expansion of the temporary foreign worker program and increasing devolution of immigration selection to the provinces are not likely to benefit Canadians in the long run. Such programs tend to bring in people who, because they have arranged employment when they arrive, initially do well, but who in the longer term are considerably less likely than well-educated and highly skilled immigrants in terms of earnings.

Reitz looks at various factors that have contributed to the weak economic track record of well-educated immigrants who have arrived in recent years as well as at measures that have been taken to improve their performance. He concludes, however, that despite all the efforts made to rectify the situation, such immigrants are falling still further behind in comparison with their Canadian-born counterparts.

He nevertheless maintains that we should continue to encourage highly educated immigrants to come to this country on the basis that they are at least going to better than the lower skilled that we are now bringing in in substantial numbers. While he briefly raises the possibility that perhaps we don’t really need so many immigrants of any kind, he chooses not to pursue this option and proceeds on the assumption that we benefit from substantial numbers of highly educated immigrants in any event.

In support of this thesis, Reitz quotes economics professor Torben Drewes of Trent University to the effect that, if there were a surplus of educated people in Canada, the price paid for their services would fall—when in fact just the opposite is happening. Reitz concludes from this that the Canadian labour market continues to need highly educated immigrants.

Others, however, take the position that, while we will continue to have labour shortages, we can meet most of these from the human resources and educational facilities that already exist in Canada. Alan G. Green, professor emeritus of economics at Queen’s University, one of Canada’s foremost experts on immigration and labour markets, for example, has pointed out that we now have the educational facilities to meet our domestic needs for skilled workers in all but extreme circumstances and that the import of highly skilled workers constitutes a substitute for the education of domestic workers.

Green goes on to state that “large inflows of skilled immigrants may well distort the decision-making process of prospective labour force entrants; for example, dissuade them from seeking advanced training,” and adds that the “current policy posture of using immigrants to solve economic problems is no longer valid” and that we “are long past the time when a fundamental re-evaluation of the current goals of immigration policy is needed.”

Reitz is quite correct in saying that bringing in masses of lesser skilled people—as we are now doing through the temporary worker program—is not a good idea. By the same token, it does not make sense to encourage large numbers of the well educated to come here simply because they fare somewhat better than those who are less educated—and even though they earn far less than earlier immigrants or Canadian born and are a substantial net cost to taxpayers. If Alan Green is right, we should be able to meet most of our labour requirements from our existing workforce and look to immigration only in exceptional cases.

Re: “Life in the Afternoon,” by Lyndsay Green

While only some of us are selfish as individuals, as a generation the baby boom is a self-serving lot. Most recently, we have brought an end to mandatory retirement, arguing that we had the “right” to keep our well-paid jobs, but preventing the younger generation from obtaining secure employment. While we profited from low tuition, we have now raised the costs of education so that the next generation could pay our high and secure salaries. Due to the size of the baby boom generation, these issues of intergenerational equity will only increase as we draw further on pay-as-you-go retirement and health benefits.

When we were being born, no one talked about population aging. Textbooks on demography in the 1960s did not even carry “population aging” in the index. Demographic aging resumed as the baby boom ended. Demographers call this “aging at the bottom” as there are fewer young people and consequently the population is older on average. This aging at the bottom was liberating for older generations, with fewer children to support. As the baby boom moved into labour force ages, the population continued to age but the labour force actually got younger. This too was a time when aging was easy. As the baby boom has become older, we have “aging in the middle” with the advantage of a more experienced labour force. But over the next ten years, aging will have more costs, as it will be “aging at the top.”

The welfare state was based on the demographic assumptions of a young population, as was the case in the 1960s. The baby boom and subsequent generations have broken the intergenerational arrangement whereby investing in children would ensure the viability of a pay-as-you-go social security for health and retirement.

The generations that followed the baby boom have extended further their time in education, delaying their labour force entry and family formation. It is these generations who should have the “right” to work to older ages.

In Boom, Bust and Echo: Profiting from the Demographic Shift in the 21st Century, David Foot usefully introduced the concept of the “leading edge” of the baby boom. He sees this cohort, born about 1946–56, as advantaged, at least in comparison to the subsequent generation X. Having had a “good run,” including unprecedented levels of labour force participation, it is time for us to make way for the next generations, and to turn our attention to more altruistic pursuits, especially volunteer work.