Not every celebrated musician makes an interesting subject for a biography. Even the most illustrious performing career is apt to read like a grocery list if the author cannot find something more to write about than a parade of engagements and accolades.

Was Lois Marshall a good choice for a biographical study? I would not have said yes with certainty until I read James Neufeld’s 334-page labour of love, Lois Marshall: A Biography. Indeed, I approached this book with more than a little skepticism: despite Marshall’s stature as Canada’s reigning soprano in the 1950s and ’60s, the image she projected in public—neatly encapsulated by her own insistence that she was “just a singer”—did not seem to offer much promise. Fortunately, it turns out that there was more to Marshall than met the eye.

In this well-written and unabashedly admiring narrative, Neufeld offers a thorough account of Marshall’s life, up to her death in 1997 at the age of 73. Her ascent to national and then international fame is explained in detail, as are the milestones of her career: performances with maestro Sir Thomas Beecham and the Royal Philharmonic, the tours to Russia, her work with the Bach Aria Group and her bold self-reinvention as a contralto at the end of her career, among others.

But there is more. Through his painstaking research, Neufeld skillfully penetrates beneath the surface to find an inner world that is rewarding to the reader. Neufeld makes no attempt to portray Marshall as a great intellect bursting with groundbreaking new ideas. (On the contrary, she was an artist of decidedly conventional and conservative inclinations.) Yet he captures the richness of a vivid life that was uncommonly rewarding, frustrating, joyous, tragic and much else. As well, he deftly negotiates two minefields—one obvious, the other less so—that anyone writing about Lois Marshall must inevitably contend with.

The story begins with Marshall’s birth in 1925 into a large family of modest means in Toronto. Soon our author steps into the first minefield—the obvious one—when little Lois is afflicted with polio at the age of two, leaving her partially crippled. Neufeld takes us through years of intermittent hospitalization, with strains on the family’s finances—but he also takes us into Marshall’s personal struggle with a disease that she triumphed over even as it profoundly changed her life. Like Marshall, Neufeld has little time for pity. But he does not spare his readers any of the sting that Marshall felt when she was denied entry to the Royal Conservatory’s opera school because of her disability, or whenever a newspaper reviewer tactlessly drew attention to her condition in print.

Neufeld captures the richness of a vivid life that was uncommonly rewarding, frustrating, joyous, tragic and much else.

In this context, Marshall’s efforts to establish herself as an opera artist seem painfully desperate. Aside from a few roles here and there, an operatic career was the one artistic goal that eluded her. (With appalling insensitivity, the artistic director of the Boston Opera Group, who had engaged her to appear in the title role of La Bohème, remarked, “You know Lois, this is wonderful. I’ve always wanted to have a Mimi who was really sick.”) As a concert and recital artist, Marshall could sing pretty much wherever she pleased—but the opera world had little use for a soprano with a limp.

The second minefield is introduced by stealth: at first, the reader may not realize that it is there at all. We are innocently introduced to Weldon Kilburn on page 42, the pianist and music teacher from whom Marshall began to take lessons in 1940. Kilburn, we learn, was 19 years older than his teenaged student—which is hardly unusual for a teacher-pupil relationship. But by page 68—at a post-concert party following Marshall’s brilliant national debut on CBC Radio in Scarlatti’s Christmas Cantata in 1947—Neufeld draws attention to the young soprano and her not-so-young mentor holding hands. The plot thickens.

The problem (as we learn on page 126) is that Kilburn was a married man, with four sons, no less. As Neufeld chronicles Marshall’s artistic rise—through her big win in the Naumburg Competition in 1952 and her New York recital debut later that year—the complex relationship between her and her teacher-accompanist flows like an underground stream. He was her guiding musical light, her reliable (if not equally gifted) pianist as she toured Canada from Vancouver to St. John’s and her lover. Back in Toronto, people in the know knew all about the affair, but nothing was said in the press: it was the 1950s, an era more polite, or more pretending (take your pick), than our own. Neufeld falls in with the discreet spirit of the times when he notes that “Weldon, apparently, did not equate personal devotion with sexual fidelity.” Was ever a man more gently called a salty dog?

Kilburn did not leave his wife, Marion, until 1958 (or perhaps a bit later), and then cohabited with Marshall in a house that she had purchased. He did not get a divorce, but when Marion died in 1968, he and Marshall married in a private ceremony. However, just three years later she caught him carrying on with another woman and threw him out. Marshall’s long and multi-faceted association with Kilburn came to an abrupt halt.

It is to Neufeld’s credit that Marshall’s disability and her relationship with Kilburn are put in perspective, used to render his subject as a flesh and blood figure, without dominating the narrative. Mostly, this book is about Marshall’s singing, which, of course, is what she was justly famous for.

Although Neufeld is not a professional musician or a musical scholar (he is an English professor at Trent University), he clearly knows a great deal about music and the human voice. He speaks insightfully of her “strong, sexy, lower register,” and the “range of passion and dramatic effect that no one expected from a well–mannered concert soprano.” Yet, at the same time, he acknowledges that “Lois’s sound lacked the qualities that made other singers easily marketable on record,” adding, “she was a performance artist, not a studio artist.” In other words, you had to be there.

Neither does Neufeld present himself as a social historian. However, he effectively captures and reflects the culture of mid 20th-century Toronto: CBC Radio was a powerful arbiter of taste; Toronto Symphony Orchestra conductor Sir Ernest MacMillan ran just about every aspect of the city’s musical life; and the word “music,” when used in educated circles without further qualification, meant classical music. Furthermore, the critical judgements of New York mattered more to a Canadian musician’s success than any amount of homegrown praise. (Some things have not changed.)

Occasionally, our author’s enthusiasm gets the better of him. His contention that Marshall’s “example helped establish the musical culture of western Europe for Canadian audiences, and for future Canadian artists, as a legitimate part of their own heritage, no longer just a remnant of colonial imitation and aspiration,” seems more than a tad conflated. It is my own belief that we would be pretty much where we are today on those issues without Marshall’s contributions.

Nevertheless, this is a good book—a book that deserves a readership beyond the clutch of Lois Marshall fans who will surely seek it out. I hope it finds it.

Colin Eatock is a Toronto-based writer, critic and composer. Last year his book Remembering Glenn Gould was published by Penumbra Press, and his compact disc Colin Eatock: Chamber Music was released on the Centrediscs label. 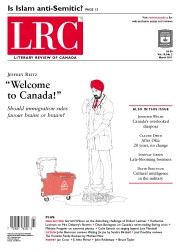