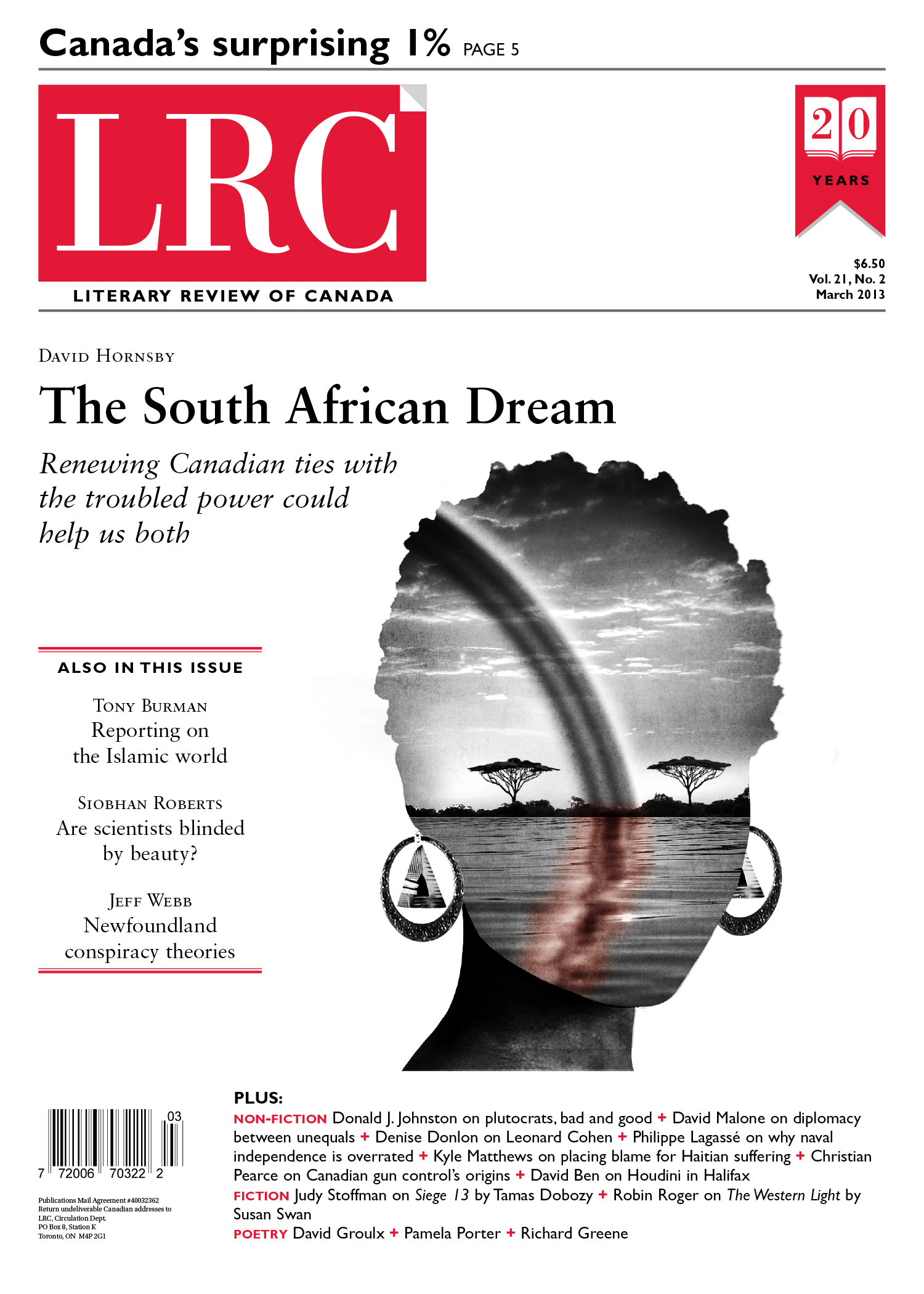 Re: “Beautiful Mistakes,” by Siobhan Roberts

Thanks to Siobhan Roberts for an interesting and thoughtful review. I note that Roberts is an apt choice for reviewer, since she has written on related topics before, in her biographies of mathematicians Donald Coxeter—whose “obsession with geometry was motivated exclusively, almost with an elitist bent, by beauty”—and John Horton Conway, who we learn here had a “lifelong obsession with symmetry.”

The review quotes mathematician Marjorie Senechal as saying that “the main intellectual tool we have is to find patterns.” One difference between the reductionist and complexity viewpoints is that the former tends to see these patterns as underlying the structure of the system (so in a sense the system can be reduced to them). From the complexity standpoint, they are just patterns, which can be exploited to a degree but don’t necessarily say much about what is going on at a finer level (where the patterns may be equally interesting but different). The model is therefore perhaps less likely to become confused with reality.

While an aesthetic sensibility is useful for detecting patterns, it is also the case that the patterns we see are influenced by our aesthetic. One of the strongest contributions of the complexity approach (which as discussed in the book has been in development since at least the 1960s) is new visualization techniques, such as those described in the last chapter for systems biology and economics, which have revealed features that elude reductionist, symmetry-based approaches.
Roberts concludes very elegantly by quoting Emily Dickinson on the to and fro between truth and beauty, and wonders if that is the deeper message I am getting at. I will of course leave the book (and not just the cover design) to answer that one, although I would certainly agree with Emily Dickinson that the dialogue between truth and beauty never really ends.

Re: “Bogeymen Versus Sportsmen,” by Christian Pearce

Rifles and shotguns are the guns most often used to kill Canadians. They dominate violence against women, suicides, accidents and murders of police. Prior to 1991, most murders in Canada were committed with rifles and shotguns, which is why they were the focus of the 1991 and 1995 legislation. Since 1995 the overall gun death rate has fallen by more than 40 percent. Homicides with rifles and shotguns have fallen by 62 percent, while murders with handguns remained constant, driven by weapons smuggled from the United States.

Virtually every public safety organization in the country—the Canadian Association of Chiefs of Police, the Canadian Public Health Association, the Canadian Criminal Justice Association—advocated for the law. Recently Toronto’s police chief reported that without information contained in the registry, gun seizures are down 40 percent over last year. And according to material made available through freedom of information provisions, the cost of maintaining the registration of rifles and shotguns—a mere $2 million a year—has been exceeded by the costs of new measures to compensate for its loss. Pearce’s claim that the law was ineffective, but “a political triumph for the gun control and women’s movements in Canada” seems a deliberate effort to marginalize.

The notion that the gun lobby is a “model of democratic action” advocating for “traditional masculine ideals” ignores the links between guns, hyper-masculinity and violence well documented by Michael Kimmel and exploited by gun pushers. “Consider your man card reissued” was the tag line for the AR-15 rifle used in the Newtown massacre. Canadian women are more at risk in rural and western communities precisely because of the good old boys with guns about whom Pearce waxes poetic.

Rabid opponents of gun control in Canada (quite distinct from the average hunter or farmer) have well documented ties to the National Rifle Association in the United States, the most powerful lobby in the world. And what is even more ironic is Pearce’s wilful ignorance about the ideological underpinnings of the gun lobby extremists in Canada and their misogyny or links to white supremacists (well documented in Warren Kinsella’s Web of Hate: Inside Canada’s Far Right Network), and obvious to anyone on the receiving end of their threats and harassment.

Re: “The Siren Song of Independence,” by Philippe Lagassé

The opening paragraphs of Philippe Lagassé’s review, expressing his concern that the Canadian Navy be provided with the ships it wants, distracts from my focus in A Two-Edged Sword: The Navy as an Instrument of Canadian Foreign Policy on the requirements, possibilities and pitfalls necessarily associated with the politico/military role of the navy in Canada’s foreign policy. He notes, as I do, R.J. Sutherland’s advice that a purely Canadian defence “rationale does not exist and one cannot be invented,” but Sutherland’s was an argument for multilateral defence structures, not an assertion that Canada did not have its own policy objectives. Multilateralism was a necessary means of serving national purposes.

While Lagassé correctly notes that Sir Wilfrid Laurier’s decision to establish a Canadian navy followed in the wake of the 1897 German decision to construct a high seas fleet, the German peril was only the occasion, not the reason. Laurier was more influenced by the growth of the United States Navy. For technical and constitutional reasons the Canadian Navy had to be closely partnered with the Royal Navy, but its strategic purpose was to establish a degree of distance from Britain (while continuing to depend on the empire) in order to address the truculent attitude of the American government to Canadian autonomy within the empire. When Britain lost its status as a world power, the Canadian Navy’s role in managing the relationship with the United States had to be transformed into careful partnership. The conclusion of an influential group of “20 Canadians” who met at the Château Laurier in July 1940 was that “cooperation with Washington is going to be either voluntary on Canada’s part, or else compulsory; in any event it is inevitable.” The struggle ever since has been to ensure the relationship is a constructive one that meets immediate national needs without sacrificing long-term values.

Generally, this is a success story, but the prominent role that the Canadian Navy took in the enforcement of United Nations sanctions against Iraq following the Iraqi invasion of Kuwait in 1990 raises serious questions about Ottawa’s understanding of the consequences of military actions. In 1983 Pierre Trudeau had warned Parliament that “the starving refugee lying in the hot dust of the Sahel can scarcely summon the strength to help himself, let alone strike out at us. If his children survive,” he then added, “they will remember us, and with fury in their hearts, you can be sure.” Only ten years later the spiritual leader of al Qaeda, Osama bin Laden, made it clear that the Iraq sanctions had aroused just such fury. Canada cannot impose strategic values on her more powerful neighbours, and I do not dispute Lagassé’s conviction that leverage to promote smart strategies calls for significant contribution of forces of the highest quality, but I believe that well-educated Canadian officers should have the confidence to develop and put forward superior strategies, and that the Canadian government should make its military support conditional upon allies meeting the highest strategic and ethical standards.

In his review of my book, Haiti’s New Dictatorship: The Coup, the Earthquake and the UN Occupation, Kyle Matthews agrees with me that Haiti is broken. And yes, I place the primary blame for this on the international community. But much of what I am trying to argue in the book is lost in his review. He accuses me of exaggeration, but systematically caricatures what I write. Perhaps making it sound like I’m saying crazy things makes it easier to avoid dealing with what I am actually saying.

There are so many distortions in Matthews’s review and I’ve not been granted enough space to reply to them all, but let’s take the most important. My book does not call for the international community to leave Haiti. No one who cares about Haiti, least of all me, wants Haiti to be isolated from the world. That is why I wrote in my conclusion that “in electoral processes, international observers, and the international media, should be welcome,” that “aid needs to get to Haiti in a way that builds up the public sector … is controlled democratically, and … is accountable to the public,” and that “Haiti will need capital, and that capital will have to come from other countries.” I don’t see how any of this could be interpreted as a call for North Korea–style autarky.

Matthews writes that my assertions are “not evidence-based,” that he “waited to find the smoking gun, such as a government document … outlining a plan to form an empire on the back of Haiti’s people.” In my 530 endnotes I do, of course, cite plenty of government documents and primary sources—thanks in part to WikiLeaks. But I argue that what has been done to Haiti was done right in the open. Who needs secret documents when the public record shows the U.S. embassy took President Aristide on a plane to the Central African Republic in the middle of the night and coordinated with the armed rebels by phone?

Last, Matthews writes that “harping on the past will not change the future.” At Independence, France blockaded Haiti and forced it to pay 150 million francs (about $21 billion in today’s terms) for the property France lost (i.e., the slaves). It took about 130 years, but Haiti paid. The legal case that the money be returned is irrefutable, the sum of money immense for Haiti. When Aristide started asking for it back, France helped overthrow him. Is the past really past?

In his review of Haiti’s New Dictatorship: The Coup, the Earthquake and the UN Occupation by Justin Podur, Kyle Matthews questions whether the United States sees Haiti as “a place to set up low-cost garment manufacturing plants.” Matthews laments Podur’s failure to produce “the smoking gun, such as a government document … outlining a plan to form an empire on the back of Haiti’s people.”

In his response to the review, Podur himself notes that “what has been done to Haiti was done right in the open. Who needs secret documents when the public record shows…?”

As an example of what the public record shows, we might look at the salient reconstruction achievement since the Haiti earthquake in 2010, namely, the financing, construction and opening of Caracol Industrial Park in northern Haiti, showcased at an inauguration ceremony by Hillary and Bill Clinton and touted by Haiti’s President Michel Martelly as “a model of international cooperation and a symbol of Haiti moving forward.”

Haiti commentator Roger Annis is not convinced. He notes that “the park’s anchor tenant is South Korean apparel giant Sae-A Trading Co. Ltd … [Another] tenant from the neighbouring Dominican Republic [is] … D’Clase Apparel, which has investments in clothing and footwear”; he points out that the project’s direct lure for investors is “its duty-free status and a 15-year tax holiday” and quotes sociologist Alex Dupuy, who claims “the only reason those industries come to Haiti is because the country has the lowest wages in the region.”

I agree with Justin Podur: we don’t need a smoking gun.