If you read only English-language print media, you may just barely recall a reference to La Bataille de Londres: Dessous, secrets et coulisses du rapatriement constitutionnel when it came out in April of this year. In this retelling of the patriation saga of 1978–82 Frédéric Bastien argues for the critical importance of the British side of the story, using new evidence gleaned from official sources in the United Kingdom. Much of it came from diplomatic correspondence obtained via freedom of information requests. The author’s sensational allegations about inappropriate behaviour by Chief Justice Bora Laskin during the Supreme Court’s consideration of the Patriation Reference of 1982 were front-page news for a day. The story then sank like a stone.

In the French-language media, the book’s allegations were treated as the Canadian equivalent of the Wikileaks scandal, with Bastien, cast in the role of Julian Assange. For weeks scarcely a day went by without some print coverage in Quebec, numerous letters to the editor and hundreds of reactions, mostly angry, on newspaper websites, not to mention radio and television shows, internet discussion and so on.

In a dream tie-in for Bastien’s publisher, the book’s release coincided not only with the date of Margaret Thatcher’s death but also the selection of Pierre Trudeau’s son Justin as leader of the federal Liberal Party. A photo of Thatcher and Trudeau Sr. appears on the cover of La Bataille de Londres, and the Iron Lady plays a key role in the book and in Bastien’s interpretation of events. But even without the coincidence of Baroness Thatcher’s death and Justin Trudeau’s win, the story clearly would have had legs in Quebec. 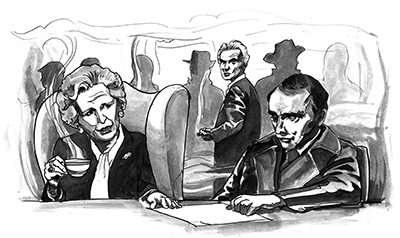 On April 16, barely a week after the release of the book, the provincial legislature, the Assemblée Nationale du Québec, unanimously resolved to demand that the federal government release all papers in its custody relating to the matter. The government responded with a yawn that more or less tracked the response in English Canada. Patriation? Been there, done that, don’t want to go there again.

None of this is terribly surprising. The accord leading to the Constitution Act, 1982, an accord that the Quebec government did not join, has always been seen as illegitimate and a source of grievance in some circles, whatever its legality. The decade of negotiations that followed 1982, which attempted to secure Quebec’s endorsement of a new constitutional package, only made matters worse, ending with the defeat of the Charlottetown accord and the 1995 Quebec referendum.

The close to two decades of constitutional “peace” that have followed the referendum have been, in some sense, artificial. English Canada hoped that time would heal past wounds and that demographic change would weaken the sovereigntist cause. To some extent that has occurred, as shown by the weak minority government achieved by the Parti Québécois in September 2012, after nine years out of power, and the decimation of the Bloc Québécois in the 2011 federal election. But the controversy created by Bastien’s book demonstrates that the wounds opened in the constitutional battles of 1980–82 remain far from healed.

Aside from the references to the judges that have caused such a furor, the new information found by Bastien will be of interest mainly to scholars of British-Canadian relations. La Bataille de Londres explores in great detail how the Canadian constitutional issue played out in British politics. Some members of the UK cabinet were incredulous at the power that their parliament still possessed over the Canadian constitution and wondered how they could divest themselves of it. Nicholas Ridley, minister of state for the Foreign and Commonwealth Office at the time, proposed a unilateral repatriation whereby the British parliament would pass a new British North America Act transferring all its own powers to Ottawa. His officials patiently explained that while such a measure was theoretically possible, the political consequences in the form of provincial outrage would be enormous.

Bastien also tries to explain why Margaret Thatcher unwaveringly supported Trudeau’s initiative in spite of opposition from her own backbench (many of whom were ideologically opposed to a charter of rights) and the two leaders’ conflicting political views. Thatcher dismissed Trudeau as a “left liberal” in her own memoirs and found him unbearably soft on communism. Yet she remained his staunch ally throughout the “Battle of London.”

Here Bastien points to the central importance of the Atlantic alliance in Thatcher’s politics. She suspended judgement on aspects of Trudeau’s personality and policies that she disliked because of her overriding desire to maintain good relations with Canada as an ally. While Anglo-American relations were at the core of Thatcher’s preoccupations, she was also keen to keep Canada on side in the global struggle against communism. She had everything to gain in assisting Trudeau and nothing to gain by encouraging the provinces.

Bastien makes no secret of his own views. He is a strong Quebec nationalist who detests the Trudeauvian legacy of the charter, multiculturalism and minority language rights. Enamoured of organic approaches to society, Bastien abhors liberalism and embraces Joe Clark’s “community of communities” as the appropriate model for the Canadian polity. The project of his book is to delegitimize the Charter and the 1982 constitutional “deal” by demonstrating that it was foisted on Canadians through a combination of clever political propaganda and high-level trickery amounting to constitutional subversion.

Here Bastien’s accusations against Chief Justice Bora Laskin are key. Any dirty tricks by the politicians can be chalked up to, well, politics. Short of actual corruption, violence or intimidation, it is hard to say that any tactics are off the table in Canadian politics. But allegations that the chief justice of Canada conspired secretly with the British and Ottawa to stack the deck against the Gang of Eight would be different: if proven, those could be politically explosive, perhaps even beyond Quebec.

La Bataille de Londres describes five incidents involving Chief Justice Laskin and one involving Justice W.Z. Estey that Bastien characterizes as “interventions” in the patriation debate. In his view, these interventions represented breaches of the separation of powers of such magnitude that they rendered the opinion in the Patriation Reference null and void. This review is not the place to analyze in detail Bastien’s treatment of these incidents; I have done so elsewhere. (Indeed, my forthcoming article in the Osgoode Hall Law Journal is available at <reviewcanada.ca/girard>.) In summary, only one of the incidents raises any issue that might warrant concern. All the rest are based on demonstrably erroneous interpretations of the evidence or on evidence that is itself ambiguous or inconclusive.

There are three main problems with Bastien’s approach. The first is that he has an unrealistic and uninformed view about what constitutes inappropriate behaviour on the part of judges. Judges meet politicians and diplomats all the time on social occasions and at official events. They are not forbidden from discussing current events in a general way, or from observing that a contemporary dispute is likely to end up in court, as long as they do not express a view about how they think the dispute would or should be decided. This is all that happened in the intervention attributed to Justice Estey. What Bastien terms a “warning” to the “imperial government” (?!) about the “intentions” of the Supreme Court was a completely anodyne conversation with the British high commissioner about the likelihood that Trudeau’s initial, “unilateral” package would end up at the Supreme Court of Canada.

The second problem is that one cannot take at face value the assertion by a diplomat that what he or she is reporting as “Highly Confidential! Top Secret!” really is so. Diplomats are disposed to portray their findings as insider information even when they are not, or to exaggerate the importance of what they convey. Based on a note from the British high commissioner, Bastien faults Chief Justice Laskin for revealing “confidential information” about the timing of the hearing in the Patriation Reference, when the information was never confidential in the first place and was being discussed with both parties’ lawyers the next day. Bastien is insufficiently critical of his sources and does not test their validity against other contemporary evidence.

The third problem is that the information relayed in the diplomatic correspondence is almost always conveyed in summary form in indirect speech. These are not the Watergate tapes. Without context it is difficult to know what meaning the parties attributed to the conversation. For example, between the hearing and the decision in the Patriation Reference, Laskin is reported as having said to a Foreign Office official at a dinner at the Middle Temple in London that he was returning to Ottawa to “knock a few heads together.” Bastien is confident that he knows exactly what this means: Laskin was reporting to the official that his colleagues were in disagreement and he was returning home to straighten things out. Really?

The one incident that does give rise to some concern is a meeting between Laskin and the English attorney general Sir Michael Havers in July 1982 in which Laskin discussed the timing of the rendering of the decision and disclosed that the judges were in disagreement. The English were not a party to the proceedings and it is not clear that Laskin disclosed anything about the substance of the disagreement. Still, if this incident had become known and someone had complained to the Canadian Judicial Council, it is possible that Laskin’s action might have been found to have compromised the appearance of judicial independence. But this would not lead to the nullity of the decision, especially since it was an advisory opinion in a reference case, not a determination of rights. Bastien in any case cites no law or academic opinion supporting his legal conclusion.

La Bataille de Londres is well written and does convey a fresh perspective on some well-known events. But its attempts to undermine the Patriation Reference and the constitutional package of 1982 are based on faulty interpretation and wishful thinking, and have no support whatever in law.

Philip Girard is the author of Bora Laskin: Bringing Law to Life (University of Toronto Press, 2005). He teaches at Osgoode Law School.

Philip Girard seems to believe that the process of writing history leaves the door open for historians to write whatever they wish, notwithstanding the evidence. Such is apparently the case with my book, La Bataille de Londres: Dessous, secrets et coulisses du rapatriement constitutionnel, whose purpose, Girard says, is to “delegitimize” the Charter of Rights and Freedoms, the Supreme Court and the 1982 constitutional agreement.

This is not the way things work. When I started my research eight years ago I had no idea of the resistance that Trudeau encountered initially in the United Kingdom because he wanted Westminster to enact a charter. Considering the clash that ensued...