And V leapt from the place she’d been born (in the crook of a branch of the Tree of Knowledge) onto the stunned couple. She planted her imprint in the animal skins they hugged around them, creating the first primitive couture, furry V-necked vestments they could fit over their heads. Then they left the verdure of the Garden to venture into the cold. 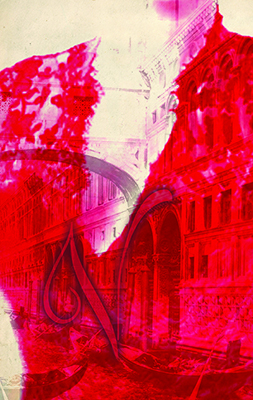 V had to go with them. How could she stay living in innocence? She was born to be fashionable.

Through the centuries her point became more precise (especially after the invention of scissors), yet V was not interested in making points, but in being them.

V always pointed down toward the vestibule of the vagina, but V’s pride was more than the vajayjay: it was the plunge, the valiant leap into the void.

She sprang to the wings on the helmets of the Visigoths, dove off ledges to the halls of Valhalla, folded herself into the inner elbows of the multiple arms of Vishnu.

V invested herself everywhere, from the V of the geese in fall to the In vino veritas signs above the wine bar.

Revelation was V’s position, even when she climbed inside the quavers of the voices of high school valedictorians. “I’m coming with you!” she always shouted, varooming into their visions.

She never wanted to be left behind. She always wanted to go forward, an arrow of a vibrant universal form—even on something as tame as the collar of a man without a tie or the blouse open to a woman’s cleavage by just one more button. Maintaining the adventure of flesh, she was voluptuous, but also a little vestal. She peeked from the necklines of Vermeer’s virgins and out from the crook of the seamstress’s thumb and index finger in paintings by Vuillard.

V had the memory of the long view. She never forgot how she vexed a vengeful deity as she leapt from innocence to become a veritable spiritual couturière. Her adventure is still a vestige of every journey. Even now V vaults onto travellers’ clothes as they revolve in suitcases turning in every baggage carousel from Venice to Vladivostok. V burrows into each traveller’s thought of liberty and frames the chest, the breast, the heart (even as it might reveal a scar), inserting her valour into their vast unknown.