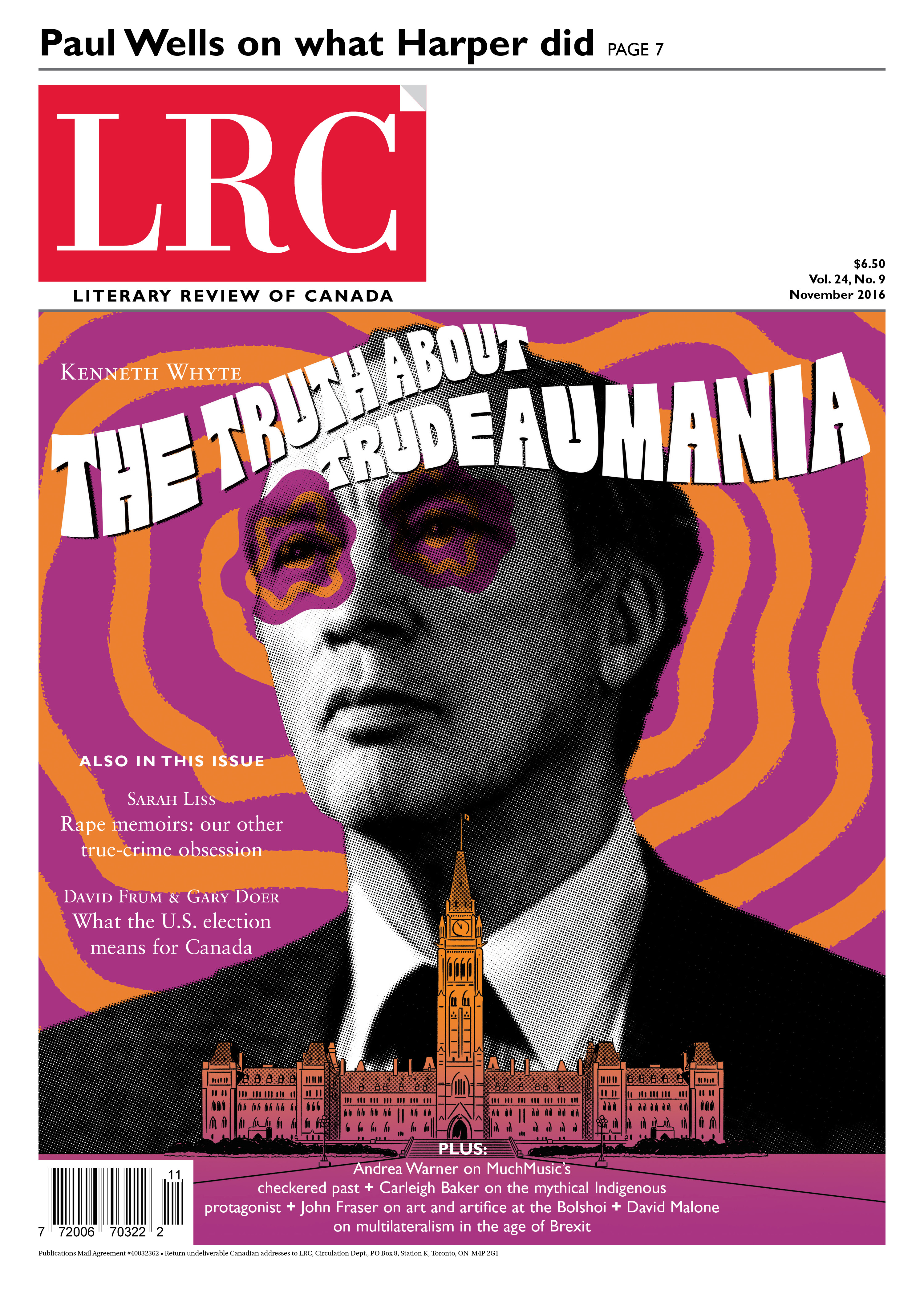 Re: “The Truth about Trudeaumania,” by Kenneth Whyte

l was impressed by how the reviewer of the two recent books on Trudeaumania knew more than about the subject than both of the authors. I  wrote one of these books, over a number of years, and yet it turns out that he is the authority, putting me in my place for taking a mere “fad” seriously, failing to understand it and exaggerating its significance. He even gets me to “admit” that Trudeaumania was “not a mania in the sense of a contagion that swept through most of the populace.” Silly me, I thought that was my argument, not a dark secret I was hiding from the LRC’s Grand Inquisitor. My main argument—that a particular demographic drove the mania and saw its vision of Canada confirmed through Trudeau’s success—he either misunderstands or ignores. Historians, he tells us, “find what they want in the record.” I feel greatly unburdened of professional obligations by this revelation. I will pray to be endowed by some greater power with intuitive gifts to rival those of the reviewer. Then I can forego all that research, watch an Austin Powers movie and get the general idea.
By the way, Robert Stanfield was photographed eating a banana during the Progressive Conservative leadership convention in September 1967, not in the federal election campaign of 1968 as the reviewer implies, but so what?

There are a couple of points in Ken Whyte’s review that need clarification.

First, the famous picture of Robert Stanfield eating a banana was not taken during the election campaign, but at the Progressive Conservative leadership convention at which Diefenbaker was deposed and Stanfield made leader. The campaign came later and produced another notable photo—Stanfield dropping the football while playing catch with reporters during a stopover.

Second, was there such a thing as Trudeaumania? I suppose it depends what you mean by the term, but I covered the election campaign for The Globe and Mail (I was Ottawa bureau chief at the time) and I remember an event in Victoria when Trudeau arrived by helicopter, landing in the middle of a large crowd amid great enthusiasm. He flew later that night to Edmonton, where the airfield was surrounded by crowds, and it appeared to me and to other reporters that his campaign was catching fire. Perhaps some people were maniacal, but there was certainly excitement and enthusiasm.

I’ve read neither Paul Litt’s Trudeaumania nor Robert Wright’s Trudeaumania: The Rise to Power of Pierre Elliott Trudeau, but I did read Kenneth Whyte’s review in hope that analyses of that spring 1968 phenomenon would escape our provincialism. Perhaps Litt and Wright do register the influence of a global, youthful passion for greater—if undefined—“liberation” on the mainly English-Canadian desire to view Pierre Elliott Trudeau as the apostle of flower power plus “constitutional renewal.” If so, such is not evident in Whyte’s review. However, if none of the above has set Trudeaumania in an international context, I will do so again, as I did in introducing my play (and opera, composed by D.D. Jackson), Trudeau: Long March / Shining Path,  in 2007 and George A. Walker’s woodcut-illustrated 2015 biography, Trudeau: La Vie en Rose.

So, compare snaps and film of the campaigning PET with those of Senator Robert F. Kennedy in his battle to secure the 1968 Democratic Party U.S. presidential nomination. PET’s Canadian crowds are just as touchy-feely as those that RFK attracted, though his are less erotic (i.e., kissing), if decidedly more messianic (i.e., clutching). Not only was the American media “massage” (merci, Marshall McLuhan) of RFK a stimulant for the Canadian embrace of PET, so were overseas events that projected a similar ideal of, to cite philosophe Herbert Marcuse, “kinship of the beautiful, the divine, the poetic, but also kinship of the beautiful and unsublimated joy.” I refer to the young of the Prague Spring who craved “socialism with a human face” and I refer to the Sorbonne students who paced the barricades in Paris’s Quartier Latin during the quasi-surrealist, revolutionary “Happening” of May 1968. I hold that “Trudeaumania” was (English) Canada’s as-usual-progressive-conservative response to a universal wish, that spring, especially in the Occident, for Love, Peace and Freedom (defined vaguely), all of which, for us, back then, a sexist, once-ethnic-Québécois-nationalism-extolling, patrician intellectual came—bizarrely, but consequentially—to symbolize.

Re: “Paul Wells on What Harper Did,” by Paul Wells

This is a comment on the review by Paul Wells of The Harper Factor: Assessing a Prime Minister’s Policy Legacy by Jennifer Ditchburn and Graham Fox. Wells is too kind to the book, which has a lot of signs of a work that was too hastily slapped together. There is no index, and there are a fair number of typos and, although it was supposed to produce a work that was “informed more by evidence than by partisanship,” even Wells notices that the book tilts away from people who might be expected to be supportive of Harper. In some cases, on hugely important topics, the bias is almost ludicrous. An assessment of Harper’s economic record is handed to David Dodge, who was a Liberal appointee as governor of the Bank of Canada. If Jack Mintz had written the chapter on the economy or Claudia Cattaneo the chapter on energy policy, Harper would have been reviewed much more favourably. On such important issues, a book like this that truly aimed to be non-partisan surely should have had opposing evaluations and let the reader decide whose view they found more convincing.

One of the biggest disappointments of economic policy under Harper was undoubtedly the 2011 renewal of the inflation control agreement. After the 2006 renewal agreement, Bank of Canada governor David Dodge and finance minister Jim Flaherty had approved an ambitious research agenda to examine important changes for the next agreement. One of these was a reduction in the target rate of inflation. Finally, the target rate of inflation was left at two percent, rather than being lowered. There were not even the most obvious caretaker-type changes in the measurement of core inflation (see my paper “Replacing the Bank of Canada’s CPI Excluding the Effect of Indirect Taxes with a CPI at Constant Tax Rates”), let alone a revision of the target inflation indicator itself. Oddly, this episode is ignored in the book. Although Harper made no changes in the 2011 renewal agreement, he at least avoided the kind of dysfunctional changes that were introduced by the Trudeau government in the 2016 renewal agreement. The target rate of inflation was effectively raised, since there had been a substantial reduction in measurement bias for the consumer price index between the 2011 and 2016 renewal agreements. The CPI measure of inflation that had served as the operational guide was replaced by three inferior core measures.