Although well thumbed, our sturdiest blueprint for the coming-of-age form of storytelling remains the Telemachy, the first four books of Homer’s Odyssey wherein Telemachus, son of Odysseus, rages against his mother’s suitors and, with Athena’s urging and assistance, hikes off in search of some trace of his father. Telemachus’s identity is forged in the furnace of his belief that his father remains alive. In the countless iterations of that tale undertaken since, art has frequently provided a character’s map from childhood to maturity, and it is to that art-obsessed subgenre of bildungsroman that Devon Code’s debut novel, Involuntary Bliss, belongs. Like Theo Decker in Donna Tartt’s The Goldfinch, who totes a painting through his life as both key and memento, the unnamed narrator of Code’s novel elevates art to a central position, relying on it to explain, to console and to express, although it does not necessarily express what he means it to.

In “The White Knight,” a short story from Code’s 2007 collection, In a Mist, a character named Frank Rinehardt devotes himself to the study of the films of Humphrey Bogart. Of Casablanca, Frank says, “it occurred to me that if I could make sense of the film in a way in which no one had managed to do before, I might imbue my own life with a sense of purpose it seemed to lack.” As time progresses, it becomes clear that Frank’s intellectual questing has become a spiritual thirst; he connects dots apparent only to him, eventually linking Bogart to a deep reading of the nearly cosmic significance of chess. “I am a believer,” he concludes. In “Alice and Roy,” from the same collection, characters are brought together by their appreciation of an obscure jazz singer, their letters to Down Beat magazine and their attempts to revive the singer’s reputation. Throughout Code’s work, characters—usually young males—latch onto codices, texts or cultural relics out of the past in order to graft some measure of meaning onto their lives. They go in search of designs for living and often find them in unusual places. It might be chess, or music, or, as in the case of Code’s 2010 Journey Prize–winning story, “Uncle Oscar,” croquet. His characters are in search of totems as well as shibboleths—that is, proof of their own identity—and a means of locating others who share their beliefs.

This remains true in Involuntary Bliss, which features a trio of young men bound by an obsession with an esoteric text they refer to only as “the Peruvian novella.” The plot is light. University classmates in the subject of “Cyclopean Studies” form a bond, one of their number dies tragically, the others stumble about attempting to make sense of things, women are wooed and lost, passage is booked to Machu Picchu, and it all leads, as these things inescapably do, to an ayahuasca experience. This is not a book much concerned with plot; it is a dialogue narrated by an intermediary—a book, above all, about ideas. It functions simultaneously as a bildungsroman and as a heady, talk-heavy philosophical novel, the trick being that the ideas and philosophies worried over by Code’s characters are ultimately nonsensical. Code is not interested in the ideas that fuse these young men’s identities, forging them into something built to withstand the rest of their lives, but in the zeal with which they adopt and cling to them, as well as the connections made, and unmade, thereby. 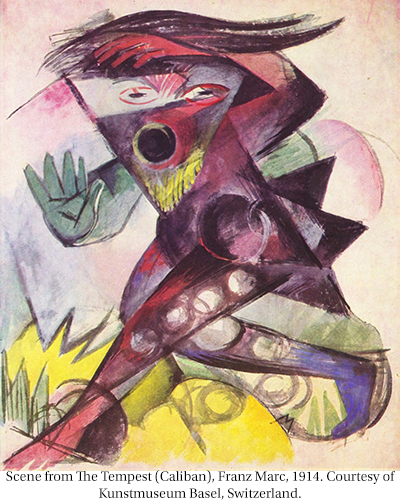 Since Code mentions Casa­blanca, let’s talk about McGuffins, those objects or goals that serve only to drive a story forward. Hitchcock used the term, and so, too, does Frank Rinehardt in “The White Knight,” identifying Casablanca’s McGuffin as the transit papers that will ensure their bearer safe passage to Lisbon. In Involuntary Bliss, the Peruvian novella fills the role, binding and motivating the three young men, although its contents remain mysterious to the reader. In Code’s hand, this enigmatic text is malleable and fantastical enough to allow him access to what he is really interested in: not the particulars of a belief system, but the processes and pathology of his characters’ near-fanatical belief.

Given that this is a story of following and not of leading, Code’s narrator is not the mouth from which we hear most of Involuntary Bliss’s story. He is merely the set of ears through which it is transmitted. These ideas, therefore, are in a way secondhand. It is James, friend and former classmate of the narrator, who relays most of the action over the course of a weekend in Montreal, where he has come to cobble together a new life in the wake of the tragic death of Warren, the third of the young men for whom the Peruvian novella constitutes something of a sacred text.

Involuntary Bliss displays the influence of Austerlitz, W.G. Sebald’s 2001 novel of history and identity, in which an unnamed narrator provides the true central character, Austerlitz, with someone they can tell their story. In the telling, Austerlitz, like James, is prone to dense blocks of thought, which translate into long paragraphs sometimes spanning several pages. These passages meander because Austerlitz is engaged in a complex process: assembling an identity that, through a complicated family history, has eluded him. His effort requires both discovery and invention, digging through archives as well as following his own interests in an attempt to piece together something whole. We make ourselves in part, suggests Austerlitz, from ideas. The novel, the events of which occur over several decades, amounts to the title character puzzling aloud to his friend about his travels and his fragmented personal history. He combines artifact and invention to achieve a bricolage identity.

The density of sentence and paragraph in Code’s novel also arises from a different need: play. Code’s most acrobatic prose comes in the service of describing systems of belief: the more outrageous or surreal, the better. Infants are the perfect revolutionaries; exotic dancers’ breasts are receptors and transmitters of “dynamic impressions”; Québécois art is misrepresented by the covetous attention directed toward bad Québécois artists by New Jerseyans with poor taste; the imminent arrival of the Four Horsemen is signified by societal symptoms such as “the hegemony of arborescent thinking.” In such passages, Code is at his most inspired and playful, laying bare an assertion that systems of belief are flawed, good for nothing so much as making zealots and fools out of the young. But he is also not above casting a fond eye back toward that period in life. Being misguided, he suggests, never felt so good.

In the late 1980s, into the cauldron of what was dubbed, for want of a better term, the post-­hardcore music scene of Washington DC, there arrived a group called the Nation of Ulysses. Their music was as abrasive as it was thrilling, a mash of noise-punk and free jazz. Onstage they presented a unified front, a phalanx of young men in black suits, shined brogues and pomaded hair, inexpertly bashing their instruments while shouting slogans, reciting manifestos between songs. Their first album was called 13-Point Program to Destroy America. Their desire was to provoke, and to do so they borrowed from Futurism, avant-garde jazz, French philosophy, Black Pantherism and Detroit’s proto-punk musical agitators MC5. The result was theatre: a series of three-minute love letters to movements, but not any particular movement. They paid tribute to the romance of the revolutionary ethos, the fury of young people discovering such belief systems and putting them to use in the creation of identity. When it came to specifics, the Nation of Ulysses refused to be pinned down, but that never seemed to matter. The energy was what inspired them, and that energy was what they effectively expressed.

That same energy is brought to mind by Code’s slim novel, the power that a Celestine Prophecy–like, quasi-holy text can exert over young men who willingly prostrate themselves before it, acting and feeling with the searing urgency of Goethe’s Werther. There are moments in Involuntary Bliss when readers may find themselves frustrated by Code’s unwillingness to divulge particulars, but reality could never reach the levels of absurdity cooked up in the young men’s brains—disclosing the actual contents of the novella, for instance, would have imposed a too-precise specificity, thereby ruining the illusion. Instead, he gives us the contact high; his characters’ mania is the real point, not the details. By dodging those specifics, Code has written a novel not about belief systems, but about believers; not about the dots, but about those who would define themselves by the fervour of their efforts to connect them.