Indigenous London: Native Travelers at the Heart of Europe

This is one book that can be judged by its cover, which features a startling 2012 artwork by the Cherokee painter America Meredith. The image is a playful riff on the jacket of the Beatles album Abbey Road. But instead of world-famous British rock stars striding over the zebra crossing in 1969, we see three Cherokee diplomats who toured London in 1762. The artist’s feat of time travel is both witty and unsettling, raising a host of questions. What are those Cherokees doing there, so far out of place and time? What was—and is—the meaning of their presence at the heart of the British Empire, straddling its rise and fall?

Coll Thrush’s Indigenous London: Native Travelers at the Heart of Europe addresses such questions in a wide-ranging exploration of the 500-year relationship between imperial centre and colonial periphery; between Londoners of all kinds—kings, queens, adventurers, onlookers, showmen, rakes, writers—and visiting folk from faraway lands invaded by Britain’s empire, often violently. Some of those visitors were lured or kidnapped; others came of their own free will in hopes of shaping British policy. The latter, mostly high-ranking envoys seeking talks with royalty and officials, also came to gather intelligence of what their people faced. One of the 1762 Cherokees, Utsidihi, gave a revealing demographic report when he got home: “the numbers of warriors and people being all of one color which we saw in England far exceeded what we thought possible.” His journey had taught him that the white tide of settlers flooding onto the Cherokee Nation came from an inexhaustible source: the slums of Europe’s biggest city and its rural hinterland. Such insights were doubtless intended by the British; sightseeing tours of London were propaganda contrived to impress foreign visitors with the empire’s might and reach, implying resistance would be futile.

“Settlers” is hardly the right word for land-hungry whites clawing at the frontier, repeatedly on the move. It was eastern North America’s indigenous peoples who were truly settled there, who lived in towns, farmed the land, and had done so since time immemorial. Many were still using great earthen pyramids built by their ancestors in a time before Spanish marauders brought (and followed) the first depopulating scythe of smallpox through the Americas, as they had in Mexico and Peru. The “pioneer” was essentially parasitic, taking over developed lands whenever the Native owners were weakened by warfare, disruption and plague. The Plymouth Pilgrims survived their first winter only by living in Wampanoag houses and eating the corn harvest left by the dead. Yet the most tenacious Anglo-American myth, from that day to this, is that all “Indians” were nomads, sparse in number, living only by what they could hunt in a “primeval” forest. A popular 1931 history of the United States even claimed that “a squirrel might have leapt from bough to bough for a thousand miles and never have seen a flicker of sunshine on the ground.” This was not simply mistaken. It was a self-serving lie rooted in Biblical notions that the Earth belongs to those who till it. By portraying the “savages” as not really using America in the first place, the “civilized” British and white Americans bestowed on themselves the right to take it. The same sleight of logic is still at work today, in both Canada and the United States, whenever First Nations are accused of getting in the way of pipelines, clear-cut logging and other forms of what we deem progress. 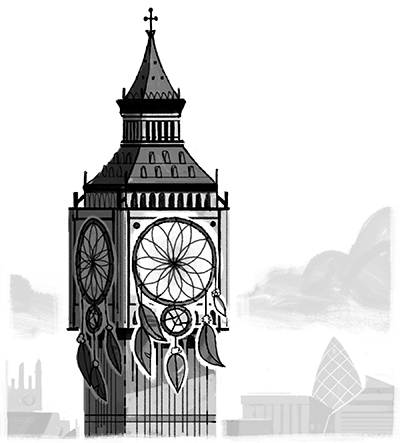 While indigenous diplomacy usually garnered little more than empty promises, it did occasionally bear fruit, notably the Royal Proclamation of 1763 on which Native rights in North America still rest today. The Proclamation enshrined the principle that only the Crown (now the federal governments of Britain’s two successor states) can lawfully alienate indigenous territory. When Stephen Harper’s pipeline “consultations” with First Nations were recently ruled invalid by Canadian courts, it was because Harper had turned the process over to private corporations.

Shakespeare’s Tempest, written a few years after the founding of Jamestown, drew on reports from Virginia and the Spanish Empire.

In the early days of contact, especially those of the faltering Jamestown colony in the Powhatan Confederacy, there were some beginnings of a reciprocal relationship between the British and the Native powers. In 1614 Pocahontas, daughter of the confederacy high chief who ruled from “Powhatan’s Tower” (likely an ancient earthwork) at what would become Richmond, Virginia, married the leading Jamestowner John Rolfe. Two years later this couple led a delegation to London during which Pocahontas was treated almost as an equal by King James and Queen Anne. A portrait of the day shows her in Jacobean dress, ruff and hat, and describes her (in Latin) as “daughter of Prince Powhatan, Emperor of Virginia.” Thrush writes that her presence at court was “a public-relations coup.” Both sides had high hopes for their alliance: new land for the British; new weaponry and other goods for the Powhatans. But Pocahontas’s stay in London ended sadly—in a way all too common for New World visitors: “two months later, she was dead, likely of dysentery, struck down as her ship descended the Thames.” One thinks of the Iroquoians kidnapped by Jacques Cartier at Stadacona (Quebec City) in 1534: of the ten he took to France, nine sickened and died.

Thrush, a professor of history at the University of British Columbia (and author of Native Seattle: Histories from the Crossing-Over Place) has a vast topic on his hands; it must have been hard to decide what to put in and leave out. His book is a feast of fascinating and important narratives involving about 40 indigenous peoples, from North America, New Zealand (or Aotearoa), Australia and the native Kingdom of Hawai’i overthrown and occupied by the United States since the 1890s. By focusing on London, Thrush not only unearths an indigenous presence there that is largely forgotten, but also gives himself a fresh standpoint from which to examine the complexities of colonialism and its fallout today. Some of the most moving passages describe the return to London of descendants, searching for their dead and forming modern communities within the metropolis.

Indigenous London seems to be written for general readers as well as students and academics. Each chapter is followed by an “interlude,” a blending of poetic imagination with primary sources (perhaps inspired by Eduardo Galeano’s technique in Memory of Fire). Mostly these vignettes succeed, although some strive too hard for effect or need more explanation. Newcomers to North American history and ethnography may feel a want of background on the various cultures from which indigenous travellers came. This is easily found elsewhere, although there are pitfalls for the unwary. As the settler-versus-nomad myth illustrates, North American history is highly politicized and always has been. The past is endlessly rewritten for the present, mainly by and for the winners. Even pre-contact population estimates are still bitterly contested—all the more so because the evidence has been swept away by the invaders’ roads and cities. Nothing remains of Powhatan’s Tower at Richmond; and when people remember that the place was once a capital, it is a more recent confederacy that springs to mind—the Confederate States of America.

A minor but off-putting problem for readers new to the subject will be identifying well-known ethnic groups and persons for whom Thrush uses autonyms and linguistically rigorous spelling, when in most other works they appear under longstanding Englished forms. This practice, with its whiff of overzealous correctness, is not followed consistently; why substitute Kanaka Maoli for Hawaiians, yet leave Mohawks (Kanienkehaka in their own language) as Mohawks? Future editions would benefit from a glossary of correspondences.

Thrush’s political sensitivities, although certainly needed to deconstruct the overweening ethnocentrism of imperial power, sometimes lead him astray. Among the book’s illustrations is a striking 1872 image by Gustave Doré called The New Zealander. This shows a robed man, probably a Maori, sitting on fallen stones beside the Thames. The figure seems to be holding a sketchbook and gazing at the broken dome of St. Paul’s Cathedral, which presides over a future London as ruined as ancient Rome. Taking the picture as a visual “lie” (albeit inverted) sustaining the colonial prejudice that “urban and Indigenous realities cannot coexist,” Thrush rips Doré for ignoring the fact that Maori had been coming to London for decades by 1872. Unfortunately, he seems unaware that Doré was merely echoing a then-famous passage from an 1840 essay by Thomas Macaulay, who had himself lifted the idea from a 1774 letter by Horace Walpole. Macaulay’s point was the remarkable durability of the Roman Catholic church, which he impishly suggested might still be in business long after England’s church and state had fallen, when “some traveller from New Zealand shall, in the midst of a vast solitude, take his stand on a broken arch of London Bridge to sketch the ruins of St Paul’s.”

That said, Thrush’s review of influences from indigenous visitors on literary London is otherwise sound. Shakespeare’s Tempest, written a few years after the founding of Jamestown, drew on reports from Virginia and the Spanish Empire. Another source (not mentioned here) was the brilliant essay On Cannibals by Montaigne, a founder of cultural relativism avant la lettre. Three Tupinambá visitors from Brazil told him they were mystified by the gulf between rich and poor in France: “some men gorged to the full with things of every sort while [others] were beggars at their doors.” This is sometimes dismissed as the essayist’s own social rhetoric, not reportage. Yet many similar observations made by the visitors in Thrush’s book bear out Montaigne’s truthfulness. The Mohegan author and minister Samson Occom, who spent some years in London during the 1760s, later told the Oneida that the English nobility “keep the rest of their Brethren under their Feet, they make Slaves of them.” Likewise, the Mohawk poet and celebrity Tekahionwake (Pauline Johnson) who visited in the 1890s and early 1900s: “With slums like this in the heart of London, they’ll dare to send missionaries to our Indians in Canada!”

The voices of Indigenous London often speak as eloquently to the world today as they do about the past.

Ronald Wright’s Stolen Continents: Conquest and Resistance in the Americas, originally published in 1992, was recently reissued in Penguin Modern Classics. His other books include the Massey Lectures A Short History of Progress (House of Anansi, 2004) and the novel A Scientific Romance (Knopf, 1997). His latest novel, The Gold Eaters (Penguin, 2015), is set during the Spanish invasion of Peru. Visit ronaldwright.com.