A small family, circa 38,000 BCE, sleeps on a shared bed of bison hides and pine boughs. The family is “warm,” which in their rudimentary but allusive language connotes family, safety and comfort. “When they slept, they were the body of the family. That is how they thought of themselves together, as one body that lived and breathed.” The daughter in the group, Girl, will have reason to remember and long for that warmth. This earthy closeness, and its disintegration, is reminiscent of Claire Cameron’s previous novel The Bear, which opens with its five-year-old protagonist curled up with her little brother, first in a tent, and then in a Coleman cooler, where they narrowly escape being eaten alive. The Bear is a high-risk plunge into consciousness-construction, the carrying voice being the free-associative but eminently pragmatic interior monologue of a very young and very traumatized child. The Last Neanderthal reprises with equal daring the consciousness of an unsophisticated but adept girl-survivor. There is something here of the current, compensatory (and thus problematic) vogue for female superheroes.

Running in parallel with Girl’s story is the present-day narrative of Rose Gale, an archeologist who, having just made the find of her life, must also grapple with the game-changer of being pregnant. “Considered old to be a first-time mother, [but] too young to have made a significant mark on [her] field,” Rose is far less pleased by the pregnancy than she knows her partner, Simon, will be. In her competitive field, stepping aside from her work even temporarily could mean forfeiting it altogether. She is no more inclined to abandon her prize than a Neanderthal huntress would be to give up a freshly killed bison.

The technical challenge of Cameron’s split-screen narrative is not only to shift gears smoothly—Girl’s story leads and is given more pages, which can make Rose’s seem interruptive—but also to keep the emotional stakes even. The story of Girl and her dwindling clan is an enthralling speculation about the nature of kinship, sexuality, emotional bonds and ethical reasoning in a prehistoric society. There is a pack order in this matriarchal culture, along with wisdom, affection and self-sacrifice. Stories and lessons are conveyed by firelight “with shadows and singsong yowls.” Morality is pragmatic: the one taboo, against incest, is empirically justified. There is no idol worship, although some hugging of trees; no hierarchy of being (the words “body” and “meat” refer to people and animals equally); there is great violence, but no great malice. This is the world before The Fall. 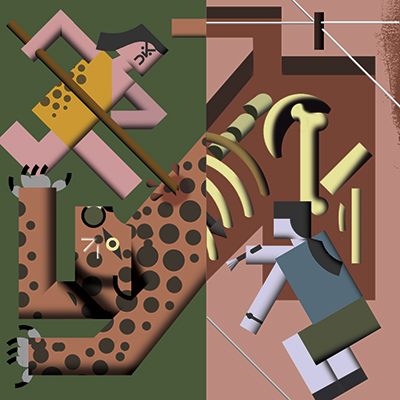 In one heart-thumping scene Girl finds herself split between a flight or fight response; as if standing at an evolutionary juncture, she realizes the danger of overthinking. The immediacy of Cameron’s third-person delivery enacts Girl’s determination to focus on the present, bodily, moment in order to survive. She is grateful, after a hunt gone wrong, that her head has not been separated “from the rest of her meat,” for she is keenly aware of the two kinds of meat: that which “gets to eat” and that which “gets eaten.” This existential bottom line propels a wonderfully visceral quality in the portrayal of Girl as she experiences loss, deprivation and childbirth—and, like The Bear’s protagonist, becomes the resourceful surrogate mother to a young boy.

Against Girl’s raw tale is Rose’s oddly flat first-person account, in which banal details of the manufactured world are described in close focus as if this will make them matter more. This is not entirely a problem of content: as Italo Calvino proved, it is possible to write fascinatingly about taking out the garbage. But although I am on board with Rose’s indignation about her professional predicament, the prospect of unpaid maternity leave and aspects of her postnatal care, warming to her character is another matter. It’s hard to muster real empathy for someone whose disclosures are unflaggingly procedural (“If I was adamant about anything in my life, it was that I didn’t travel with more than I could carry”) and who tends to speak like a droid (“While tears are a natural reaction to adversity, I believed crying played into negative assumptions about a woman’s ability to cope with difficult situations”).

One of the more believable scenes in Rose’s narrative is a domestic spat in an IKEA parking lot, when she and Simon are driven to a heated state of irritation by what some might call their first-world problems. But when Simon curls his lip and emits a cry worthy of a cave man, we are reminded of the task apparently assigned to us as readers: to draw connections between the halves of this historical diptych. But are Rose’s struggles analogous to Girl’s? If a sudden urge to purchase nifty storage solutions is evidence of a nesting instinct, it hardly rates against a pregnant Neanderthal ­tarping a hand-dug burrow with animal skins in the nick of time before winter. If irony is intended, the tone of Rose’s flat-packed narration does not prepare us for it. For this reader, the plucky cave girl makes the career woman seem a tad whiny (one dispatches a pair of leopards; the other survives a conference call). This can’t be the intended effect. In the second half of the book, when the pace of Rose’s story picks up, her situation becomes precarious and a crisis emerges, it is easier to go along for the ride. After a difficult labour, Rose feels like a hero (I will surely not be the only reader to identify), but still the emotional register is not quite right. Her acute postpartum difficulties are a textbook case; in a novel, this might not be a good thing, and we never see very far into her heart.

Different readers will bring, for one reason or another, different degrees of identification or empathy to the reading of a character, and so for others Rose may ignite a bigger spark. In any case, the uneven pairing of protagonists invites us to reflect on how, since time immemorial, the practice of mothering has been shaped by hard necessity and difficult, not to mention brutal, trade-offs. The social economy of a Neanderthal family is vastly different from ours, but economies these both are. (The root sense of this word, after all, is “household management.”) But perhaps the most important parallel between Girl and Rose is the irreducible aloneness they feel in their maternal responsibility. With respect to biological imperatives, each concludes that she is alone. So, too, with regard to social support. But while Girl’s solitude results from a perfect storm of catastrophes beyond her control, Rose’s is partly self-inflicted: she makes the tactical and emotional error of underestimating the goodwill of people around her—including the colleague who points out that the human mother-infant dyad is uniquely vulnerable: “All the other female primates can resume gathering food just hours after they give birth.” Substitute “go back to work” for “gathering food” and you have the dilemma faced by women who want to hold both their newborns and their careers close. The hubristic Rose is shocked by her vulnerability; even more, she resents being sidelined by it. She is impatient with, and yet represents, a postmodern society where, despite decades of progress under the banner of feminism, maternity is denormalized. “I’m pregnant, not sick,” she objects at one point. For me, this novel rekindled a cluster of bitter questions, such as why the experience of early motherhood is like being marooned on an island; why breastfeeding in public still causes such a fuss; why the value of childrearing is so deeply discounted; and how things would be if human social evolution had favoured matriarchy more.

Anne Marie Todkill is a writer and editor in Ottawa. In 2016 she received the Malahat Review’s novella prize.