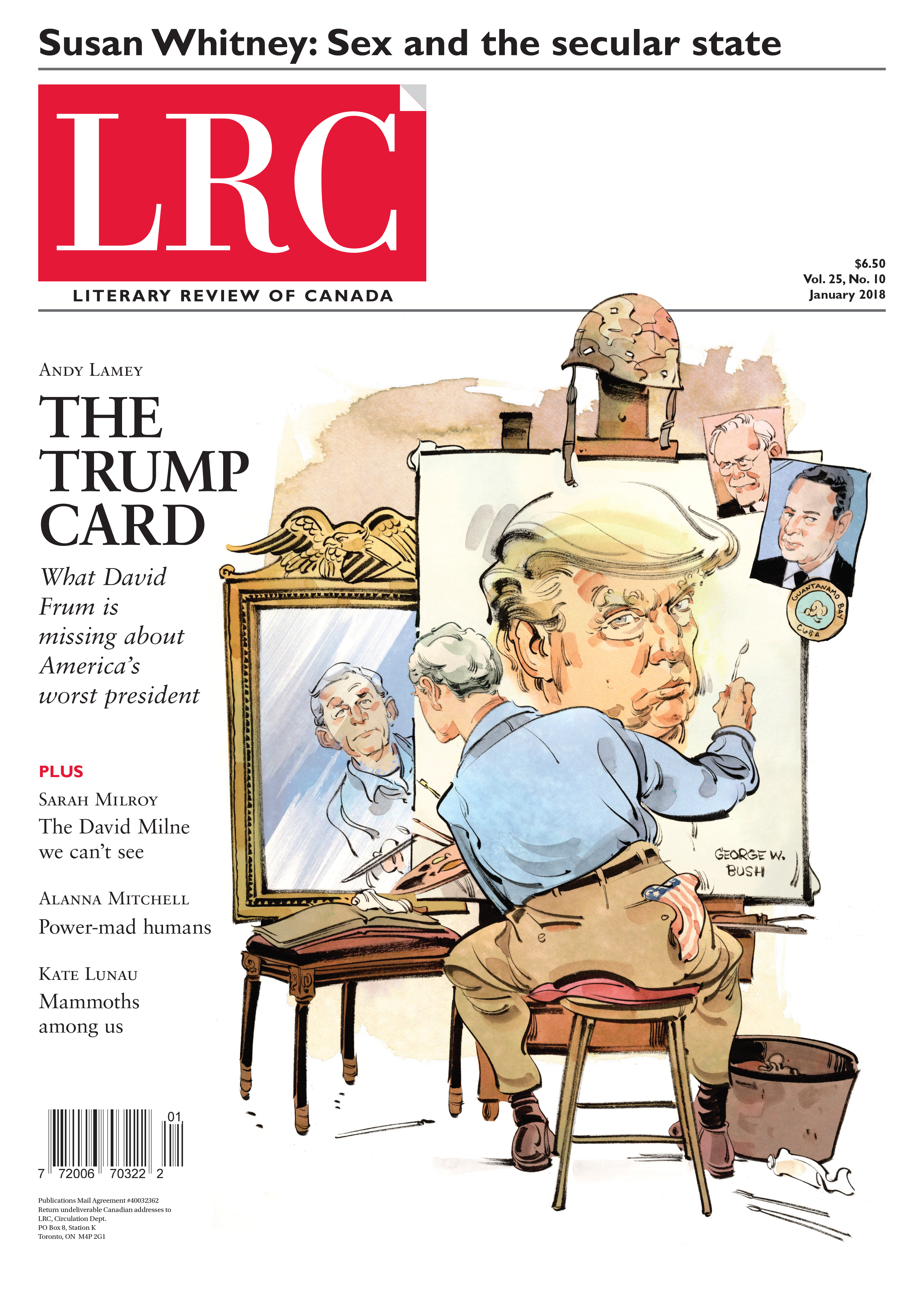 In Trumpocracy, David Frum says Trump “has ripped the conscience out of half of the political spectrum and left a moral void where American conservatism used to be.” That would be a remarkable feat for any singular actor on the political stage, let alone a man who has the intellectual curiosity of a grape. Andy Lamey suggests that Frum’s account “requires us to forget the moral void that was already present during the Bush years.” That’s true, but the moral void has long been exploited by the powerful and well connected in both parties.

As a born progressive, I will admit that Obama and his administration made an art of moral ambivalence. When Obama began his first term riding a wave of support, a variety of pundits declared the GOP dead. Two years later, it was the momentum that died, and Democrats lost control of the House of Representatives. Having witnessed their energetic black populist become an equivocating Harvard alum once in office, progressives, young supporters, and minorities failed to turn out.

The Clinton years were arguably worse. Public interest and ethical practice took a back seat to privatization, offshoring, and outsourcing. The profit-at-any-cost mentality championed by Reagan was now at full tilt, resulting in Clinton signing into law the Gramm-Leach-Bliley Act, which set the stage for the subprime mortgage crisis. Meanwhile, partisan bickering and the ensuing impeachment exposed gross hypocrisy on both sides of the aisle. Much of this would dog Hillary Clinton’s presidential aspirations in 2008 and 2016.

What, or who, were we to expect? Trump’s presidency is an aggregate of corruption in American politics. Every political lie knowingly uttered in the last four decades foretold the coming of Trump. Every moral capitulation for the sake of party identification or economic self-interest, every politician who considered themselves above the law or ethical norms, every effort to divide society using fear and racial animus, prepared the ground for this bitter harvest.

Re: “Is secularism really better for women?,” by Susan Whitney

Joan Wallach Scott’s Sex and Secularism is no doubt a nuanced and balanced book whose author has chosen a deliberately narrow focus. Certainly our world needs correctives to Western smugness about its own values. Secularists—I am one of them—can certainly use the reminder that many women choose their own religious practices and derive strength and comfort from them.

Nonetheless, I do not believe that secularism is the root of the intense emotion provoked by veiled Muslim women in some of our politicians and far too many of our citizens. English Canada has never embraced secularism with the enthusiasm of the French.

Moreover, I have also known Muslim women who wear various forms of hijab not by choice, but in fear of violence from their male relatives. Women across Iran have been removing the hijab in public to protest against their country’s dress code. On February 4, the think tank Center for Strategic Studies, a research arm of the office of Iranian President Hassan Rouhani, finally released the results of a survey report—conducted three years earlier—showing that almost half of the population wants the veil to be a personal choice, not a mandated one.

Secular society obviously has its own history of misogyny and discrimination, but as a woman I would still prefer, were I facing an issue of divorce or custody, to appear before a secular court rather than a religious one.

Re: “How we are (still) dying,” by Wayne Sumner and Sandra Martin

Sumner and Martin are both extremely well versed on the topic of assisted dying in Canada, though interestingly they come at the issue from an identical perspective—that of right to access—with little or no consideration for other views. I hope to provide a slightly different lens through which to examine our current situation.

While authors, lawyers, and others approach this from a purely theoretical standpoint, the implications for physicians go much deeper—we have now, literally overnight, been tasked with putting our patients to death, after centuries of having been told this is both unethical and illegal. Turning on that thin a dime has been extremely challenging for the vast majority of members of the Canadian Medical Association.

Since the time of Hippocrates, physicians have taken an oath to do nothing that would hasten the death of a patient. It is fair to say that an oath several hundreds of years old may not apply in current times, but physicians take their obligations and their professional ethics very seriously. The CMA’s code of ethics was drafted in 1868, and has been revised 19 times since then. It is a foundational document for the profession in Canada.

The CMA appeared as an intervenor in the Carter case, but did not argue for or against a change in the law. Rather, we represented the diverse views of our members.

While Sumner does not support the right to conscientious objection by individual physicians, this is a minority view espoused mainly by a handful of non-physician philosophers who will never be asked to make such a decision for themselves. Nearly everyone agrees that physicians should not be forced to participate directly in assisted dying, and in fact the Supreme Court, in the Carter decision, reinforced this, as did the subsequent federal law. The more pressing question is: for those physicians who elect not to participate, what should their obligation then be?

In a perfect illustration of how quickly this situation is evolving, a few hours before I sat down to write this letter, a court in Ontario rendered a decision that physicians who object still have an obligation to refer patients to a provider willing to undertake assisted dying. There is already conclusive proof in Canada that this approach is not required in order to ensure patient access; Alberta has developed a robust centralized system of referral that both respects all views of conscience and also ensures equitable access.

We have not heard the last of this issue. The CMA will continue to represent the views of those tasked with carrying out this service—the physicians of Canada.

Sumner is right that Canada’s judicial route to assisted dying laws makes us almost unique. Colombia’s constitutional court struck down the laws against assistance with dying back in 1997, but it took 18 years for guideline legislation to be passed.

The provinces are definitely exercising their right to approach assisted dying their own way, as a result of which citizens who have the bad luck of living in the wrong place are suffering injustice. But there seems to be awareness that consolidation should ultimately occur. When it does, the current variation among policies will be useful in helping us identify the best policies to keep.

The Council of Canadian Academies, tasked with independently examining issues related to medical assistance in dying, was actually told not to make recommendations. But a CCA person I spoke with pointed out that they will release their report to the public at the same time as they deliver it to the government, and they could word their findings in such a way as to make “virtual recommendations.” Also, they have done pretty extensive consultation—a couple of hundred groups (including the Right to Die Society of Canada) were invited to submit briefs, and one group, Dying With Dignity Canada, sent them a box containing several hundred letters from its members.

Regarding conscientious objection by doctors: beyond the fact that this right is pretty solidly enshrined in law, there is a question of practicality. How would you force doctors to perform what is currently a quite complicated procedure (four drugs are administered successively: midazolam, lidocaine, propofol, and rocuronium) and how likely would they be to perform the procedure gently and skillfully, if they were doing it against their will?

When a doctor conscientiously refuses to provide an eligible patient with medical assistance in dying (MAID), whose rights should prevail? Jeff Blackmer, a vice-president of the Canadian Medical Association, sides with the doctors.

Doctors with a sincere conscientious conviction that MAID is wrong may legally refuse to provide it to their patients. I believe that the justification for this legal right of conscientious refusal is much weaker than is commonly assumed.

The College of Physicians and Surgeons of Ontario requires conscientiously objecting practitioners to provide the patient with an “effective referral” to a willing and available practitioner. This requirement, to which Blackmer objects, recently survived a legal challenge brought by physicians who argued that, by making them complicit in a medical service they believe to be immoral, it infringes their freedom to practise medicine in accordance with their religious beliefs. At stake for doctors is the moral distress they would feel as a result of this complicity.

Under the current law, in order to be eligible for MAID a patient must be diagnosed with “a grievous and irremediable medical condition” which is causing “enduring physical or psychological suffering that is intolerable to them.” For eligible patients requesting MAID there is obviously a great deal at stake in securing timely access to the service.

It is not a radical view, that in these circumstances, the costs to eligible patients of delayed access to MAID are greater than the conscience costs to objecting physicians of taking the necessary steps to facilitate that access. Blackmer sees this issue from the side of the doctors; I prefer to speak on behalf of their patients.