Everyone expected it to happen at some point. But when it did, it hit with a heavy, frightening thud. Throughout April, even a good six weeks into the pandemic, Nunavut remained the only jurisdiction in Canada without any COVID-19 infections. Then, on April 29, someone tested positive in Pond Inlet, a community of about 1,600 on the northern tip of Baffin Island. There’s no need to panic, officials said. But many reacted on social media that day with “Fuck.” Nobody wants the coronavirus, but Nunavut, of all places, could really do without it.

Though the virus had already devastated regions around the world, there was a heightened sense of panic when it reached Nunavut. There is so much at stake. Many of the more than 38,000 people who inhabit the territory are members of large, extended families and kinship groups. A shortage of housing means they often live in overcrowded homes. In Pond Inlet, any food that isn’t harvested locally must be flown in, and water is trucked to homes.

The Canadian Arctic is intensely familiar with epidemics. In the 1950s, one-third of Inuit in the region were infected with tuberculosis, a contagious and sometimes deadly lung disease. The legacy of TB still lingers across the North today; two young adults have died from the disease in recent years. It’s just one of many examples that illustrate how the health and well-being of Inuit falls well below that of the average Canadian. And that buzzword “isolation” is a double-edged sword in Nunavut: ­living in a remote, fly-in territory may offer some control over borders, but it also means the closest hospital could be hundreds of kilometres away — and it may have only a handful of ventilators on hand. 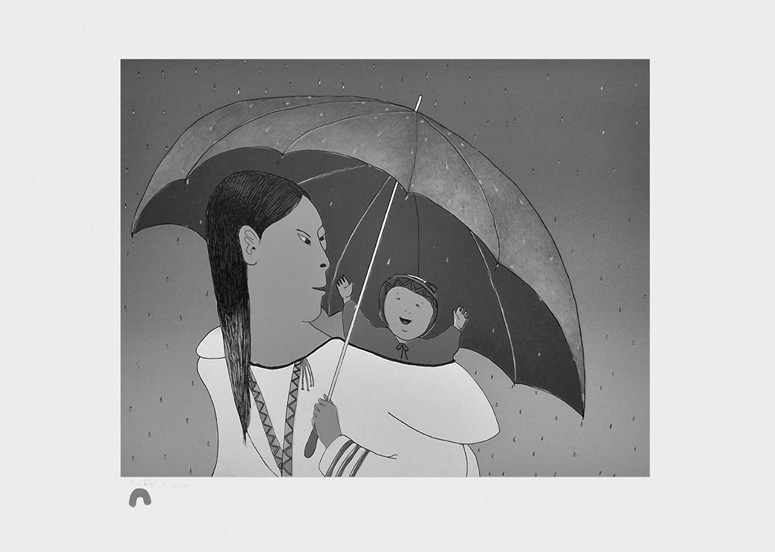 Almost as soon as Nunavummiut had processed the potent danger of a COVID-19 case, they were able to exhale relief when news emerged that the test result was, in fact, a false positive. A burden was lifted, not just in Pond Inlet but across Nunavut. At the west end of the territory, people in Taloyoak paraded through town on snowmobiles to celebrate.

In Iqaluit, Gwen Healey Akearok, director of the Qaujigiartiit Health Research Centre, says she feels lucky that Nunavut has remained free of COVID-19, but she also knows it isn’t actually luck. The territory has always had a strategy to keep people safe and healthy — one that’s rooted in compassion. We see it in the acts of kindness that abound during the pandemic: Checking in on elders and bringing neighbours fresh seal meat. The gentle reminders to children playing outside to keep their distance from each other. The live-streamed craft and cooking workshops. It’s food donations and distributions to families in need, or the songwriter who regularly performs her Inuktitut music on social media. All of these things, and more, nurture a sense of community across Nunavut’s expanse of two million square kilometres.

Nunavut is typically vulnerable to a narrative about how poorly its residents rank on health and social indicators. “We’re actually doing so well here,” Healey Akearok explains. “I want everyone to note where we’re excelling and remember it.”

The springtime in the Arctic is about as glorious as you’ll get anywhere. On southern Baffin Island, the hours of sunlight stretch longer by six minutes each day, until the late evening skies glow orange all night. Groups head out on snowmobiles to distant frozen lakes; they drill holes, jig, and pull up beautifully pink Arctic char. This year, popular spring fishing derbies are under way with participants physically distanced across the ice, taking care not to congregate over the group’s largest catch. There’s no controversy over people heading to their cabins on the weekends here, as there is with the rush of urbanites fleeing southern cities. In Nunavut, there’s endless tundra, fresh air, and snow etched with Ski-Doo trails. And even with a pandemic, some things never change — like the rhythms and colours of spring.

Nunavut itself is only twenty-one years old, but it has a weathered soul. There are Inuit alive today who grew up on the land and in snow houses, or igloos. There are those who survived government relocation into settlements, and many more who were sent away to residential school and returned with scars. The people who have lived and thrived on this land are extraordinary in their resilience to the pain that colonialism has inflicted.

By the end of May, government and health officials were still hosting regular COVID-19 updates at the territorial legislature, a three-storey postmodern building in Iqaluit that draws inspiration from a qaqqiq, or meeting place. In a wood-panelled chamber, officials sit two metres apart in seats padded with sealskin. The territory will begin to reopen, ever so gradually, in the weeks to come. This does not mean that the pandemic is over, Nunavut’s chief public health officer, Michael Patterson, insists. It does not mean that the threat has passed.

“Are you at all surprised that COVID-19 hasn’t arrived in the territory yet?” a reporter asks him. “Ee,” Patterson responds without skipping a beat. Onlookers laugh at the Inuktitut affirmation and nod, nervously.

It seems inevitable that the virus will touch the territory at some point; planes won’t stay grounded forever in a place that relies on air travel and, in many sectors, an out-of-territory workforce. Summer is coming, and with it the urge to leave the homes where people have been cooped up for months. The hope is that Nunavut will have lived and learned enough to weather whatever storms are ahead — a never-ending task in Canada’s North.

Having enjoyed the opportunity to work with Inuit at hockey schools in the mid-2000s, I think about them from time to time. This article put me back in Iqaluit and Kuujjuaq. Sarah Rogers writes so well, I feel like I am there again.