Beyond the Known: How Exploration Created the Modern World and Will Take Us to the Stars

In 1997, Jared Diamond’s Guns, Germs, and Steel: The Fates of Human Societies made its dramatic appearance and won the Pulitzer Prize the following year. It was a blockbuster history book, and bookstores continue to stock large quantities. But it was not written by a historian.

Trained as an evolutionary biologist, ornithologist, and geographer, Diamond had zeroed in on a single question: Why were there such disparities in technology among human groups? His answer — the luck of the draw in geography — was a surprise at the time. Diamond argued that groups most proximate to a broad diversity of plant and animal species (as well as water sources) had the most opportunities to marshal the few food sources biologically capable of being domesticated. Such groups were also more immune to disease because of their proximity to livestock, the main source of contagion. Since Eurasian peoples won this lottery, they were the ones who ultimately conquered, displaced, or eradicated Indigenous peoples in the Americas, Australia, and Africa.

Guns, Germs, and Steel is a sweeping history, held together by a novel hypothesis. It’s a formula that Andrew Rader has followed with Beyond the Known. From the beginning of time, he argues, our species has been hard-wired for adventure — constantly wanting to find out what lies beyond. We have always been trekking, with no choice but to boldly go where no one has gone before. 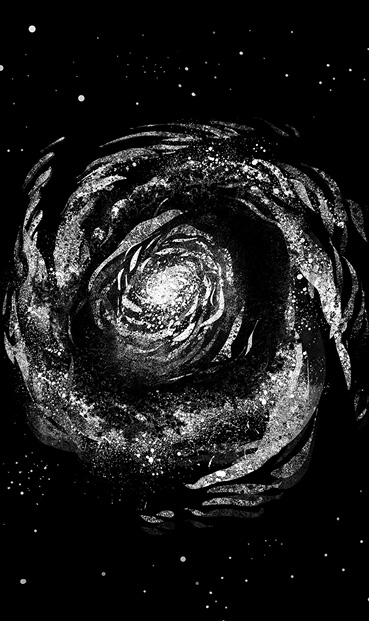 We can’t help but search the skies.
Image by Dushan Milic

At first glance, this sounds like a story we’ve heard before: like the hominids in Stanley Kubrick’s 2001: A Space Odyssey, we can’t help but touch the alien monolith that suddenly appears before us. But Rader’s sweeping thesis is deceptively simple, focusing on the difference between risk and uncertainty.

We can’t truly predict the outcome of any action, but if we have done something comparable in the past, we can roughly calculate our chances of success or failure. The insurance industry, for example, is based on the principle of calculable risk. If we have no comparable experience, however, we are faced with uncertainty, and what we do next is really a stab in the dark. Whether searching out new continents or searching for new life in other solar systems, these are uncertain enterprises driven by something deep inside us, what John Maynard Keynes once described as our “animal spirits.” While humans can never really know enough about what lies beyond to make any kind of calculation of risk, we nonetheless persist in exploring.

As Rader tells it, human history is the story of our inbred ease with unsureness. He devotes roughly a third of Beyond the Known to all of human exploration before 1492, when Christopher Columbus landed on an island somewhere in the Caribbean. He starts some 1.5 million years ago, with the migration of Homo erectus from the Great Rift Valley of East Africa to the Middle East, China, and Southeast Asia, and then tracks the migrations of Homo sapiens. As a species, our curiosity has been driving us for a very long time: from Africa to the Middle East some 120,000 years ago; to Australia roughly 50,000 years ago; and to Europe and Siberia about 10,000 years later. Around 12,000 BCE, we were crossing over from northern Asia to the Americas. We never knew what was around the corner, but we went anyway.

Civilizations — the word comes from the Latin civilis, which gave us civitas, or city — eventually emerged in Lower Mesopotamia and the Nile River Valley (3000 BCE), the Indus River Valley (2500 BCE), and along the Yellow and Yangtze Rivers (2200 BCE). In the Americas, Tlapacoya was settled near present-day Mexico City as early as 5000 BCE, and Aspero, in modern-day Peru, was built sometime between 3700 and 2500 BCE. As time progressed and hierarchical societies developed armies and navies, the need to find new accessible food sources — or to avoid danger — was supplanted by greed. The poster child of the greedy civilization, of course, was the Roman Empire, which lasted in the West until the fifth century. “An observer would hardly imagine that this tiny city would grow to dominate the entire Mediterranean,” Rader writes, “but its inhabitants possessed one critical characteristic: curiosity. Rome was open to new ideas and quick to adopt them.” Yet the real explorers of the Classical world were those who lived on the periphery, such as the Phoenicians who explored the Mediterranean and Alexander the Great of Macedonia, who made his way to present-­day India and Afghanistan, driven by an “undying fascination with seeing and understanding the world.”

The middle third of Rader’s book looks at “rediscovering the world.” The twelfth-century Muslim Berber adventurer Ibn Battuta travelled roughly 50,000 kilometres through Central Asia, India, and China. Like Alexander the Great, he was motivated by a “restless desire to understand the world”; the title of Battuta’s travel account, A Gift to Those Who Contemplate the Wonders of Cities and the Marvels of Traveling, says it all. In the late fifteenth century, Western Europeans began sponsoring voyages to Africa, Asia, and the Americas to open up trade routes and plunder other lands. It was an era marked by a fierce competition among powerful states, the building of overseas empires, the exploitation and at times the eradication of Indigenous populations, the establishment of slavery as a global business, and almost constant warfare in Europe and its possessions beyond. But it was also an era indelibly marked by unquenchable curiosity.

In addition to their military duties, British, French, and Spanish navies were charged with discovering what remained of the unknown. In the eighteenth century, for example, Captain Cook sailed on ships named Endeavour, Resolution, and Discovery — all names that suggest the desire to fill in the gaps of human knowledge. By the twentieth century, many thought only the polar regions were left. The exploration of these frozen parts of earth had less to do with greed — though Robert Falcon Scott, Ernest Shackleton, and Roald Amundsen were certainly motivated by fame — and more to do with adventure and the acquisition of knowledge.

“History is far too important to be left to academic historians alone.”

The last third of Beyond the Known deals with the literal final frontier: the sky and the planets beyond. This comes as no surprise, as Rader is a for‑real whiz‑kid rocket scientist. He attended Carleton University, where he obtained undergraduate and graduate degrees in aerospace engineering. He went on to get his PhD in long-­duration space flight engineering from MIT. He was then a candidate for the Canadian Astronaut Corps from 2009 until 2017 (during that time, he won the Discovery Channel’s competition show Canada’s Greatest Know-It-All). In 2014, Rader was under consideration for a one-way settlement expedition to Mars, a mission for which he was ready to give up his life on earth. He now lives in Los Angeles, where he is a mission manager for SpaceX, the private aerospace manufacturer and space transportation service founded by Elon Musk.

But Rader doesn’t focus just on human flight, or what he describes as the “massive strategic failure” of the space shuttle. He’s also interested in how we have sated our inquisitiveness with robots — from the Soviet Union’s Luna 1 and Venera 12 to NASA’s Mariner 4 and Kepler Space Telescope — and will continue to do so. By searching the skies, we have the potential to change our thinking as an entire species. Given the size of the universe, or even our home galaxy of 250 to 400 billion stars, it seems more likely than not that some form of life more intelligent than ours exists. And maybe this life is avoiding contact with us, bound by something like the Prime Directive in Star Trek, until we are capable of managing the encounter. That’s all the more reason to continue our explorations, in order that we can grow and learn enough to deserve such contact. “Eventually, perhaps, only species who are enlightened enough to survive will be permitted to join the interplanetary congress of worlds,” Rader writes toward the end of his book. “May we be so lucky.”

History is far too important to be left to academic historians alone. Generalists as well as scholars who come from different disciplines can and should write it, because they are often the ones who have something new to say. In a time when so many professional historians are grappling with past injustices, Rader’s examination of one of humankind’s more enigmatic characteristics (in his highly accessible style) is a welcome break.

While Beyond the Known largely draws on popular secondary works, rather than new sources, Rader is careful in how he reconstructs his tale. As an engineer, he has developed an eye for the telling detail (comparing the Vikings’ main hall at L’Anse aux Meadows, for example, to an NBA court). He also seems to have the social scientist’s ability to piece together evidence in surprising ways, including how the global spread of sweet potatoes and coconuts indicates pre-­Columbian contact between Polynesian explorers and Indigenous peoples in the Americas.

Ultimately, Rader shows that it’s in our DNA to explore. The urge to figure out what we don’t yet know — to experience what we have not yet experienced — is the hallmark of our species. That’s why we’d be mistaken to apply a simple cost-benefit calculation to further exploration: We can’t possibly know what we will find, and thus what material benefits we will ultimately derive from twenty-first-century adventures and beyond. Only through exploration and an inborn acceptance of uncertainty can we continue to work at solving the fundamental questions of science and the very nature of existence that have nagged at us since the beginning.