The first time I met Rick Salutin, we were both in need of a certain kind of salvation. We are talking about 1990 here, the start of the last decade of the previous century. Bob Rae had recently been elected the first (and still only) New Democratic Party premier of Ontario. The great and the good of the left were in a state of more-than-the-­usual righteousness, while the night riders of the right were gnashing their teeth and sharpening their swords. Both sides were looking for human sacrifices. Journalistically, it was not a safe time for either a left-­leaning disturber of the status quo or a vacillating, indistinctly right-of-­centre magpie. This would be Mr. Salutin and Mr. Fraser, who discovered each other in the eye of an ideological storm.

Rick, who thirty years later is in serious danger of becoming a “national treasure,” had been busy burning his bridges. His scathing account of the 1988 free trade federal election was particularly damning about how the NDP under Ed Broadbent made a huge tactical error by concentrating all its ire on the Liberals, thereby splitting the combined forces of the centre-­left and assisting the return of the Mulroney Tories to high office. If it was not completely true, it was true enough, which probably fuelled the anger of the NDP establishment grandees at what they took as a betrayal of a just cause. This outrage, in turn, apparently filtered down to affect Rick’s standing with the mainstream media, which, for the most part, began to shun him. He’d become a pariah.

I, on the other hand, had been floating on a certain success after assignments in China and the United Kingdom, for the Globe and Mail, but I had committed the apparently unforgivable sin of accepting the editor post at Saturday Night, under the proprietorship of he whom we now can call the Lord Black of Crossharbour. The rampant speculation was that I was going to turn the beloved magazine of Robert Fulford (probably a tad more right than me, but we can leave that aside) into a Black-­manipulated hard-right rag. In certain circles, I too had become a pariah. 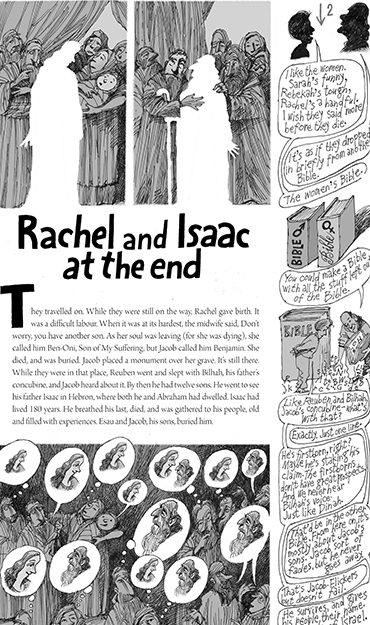 A surprisingly original act of exegesis.
Image by ECW Press

So we found each other, and in November 1990, Saturday Night published Rick’s first post-­pariah-­hood journalism, where he suggested that the CBC and the Globe and Mail were in unwitting cahoots and constituted a novelty: Canada’s first post-war Ministry of Propaganda. He described a “common law” merger of interests, whereby each media organ fuelled a kind of comfortable understanding of our politics that, directly and indirectly, supported the other. On one level, of course, this was a complete nonsense, and the two organizations scoffed the article away. But the readers didn’t. There was enough cleverness and common sense in the article to make them rethink how they viewed their principal news sources, and on the fringes of the great and the good, people talked up the theory.

The Globe and the CBC were up against a pure and critically effective form of Salutin functionalism, which is his special brand and could be defined as a way of explaining behaviour that pays no attention to what people say they are doing, or even what they think they are doing, concentrating instead on what they actually do. In this article, which we gave the title “Brian and the Boys,” and in others he subsequently wrote for the magazine, Rick was, in effect, saying that in politics or journalism, motives don’t matter; what counts is effects.

And that, friends, was the beginning of Salutin’s second coming and his journey toward national treasuredom. The Globe and Mail, clever institution that it is, recognized a comer and soon afterwards hired him as a regular media commentator, robbing me of an ideological balancing act that parlayed Salutin against David Frum. I loved the strong stuff from both of them, but time, of course, declines to stand still. Rick dwindled into becoming one of Canada’s most trenchant and challenging journalist-­commentators, and — moving smartly ahead thirty years — we now have something that was not expected: a remarkable and sweetly original act of scriptural exegesis called Gideon’s Bible.

The Gideon of this new book is not the Biblical Gideon whom God chose to lead the Israelites away from idolatry and to defeat the marauding Midianites, but the Gideon whom Rick Salutin and his partner, the television producer Theresa Burke, created. The offspring was appropriately named, though: the Old Testament Gideon was a challenger and so is Gideon Salutin. You might say God put the contemporary Gideon on earth to keep Rick humble. Not an easy task, you might also say, but the young — our own young! — have that capacity. Curiously, and for the longest time apparently, Rick forgot to explain to the Gideon of his loins who he was named after.

This lack seems to have reawakened rabbinical twitches deep within both father and son. The result is Gideon’s Bible, and I won’t disguise it: I loved it from the first page to the last, because most of all it is a tribute to the triumph of the spirit that leads us all to reach out and share, and to the other side of that equation, to reach out and dispute. Adding precious salt for flavouring, these particular Talmudic musings are heavily illustrated by the brilliant Serbian illustrator Dušan Petricic, with wonderful sketches of father and son captured in a joyous communion of both serious and joking conversation, all set amid a crowded cast of the leading Biblical worthies. But the real wonder of this little book is that it never veers too far from the evolving relationship between father and son. This is rather appropriate. Rick was a rabbinical student with very serious intentions in his youth. We get some insight into this from Margaret Atwood, Gideon’s godmother, who has written a loving, edgy foreword where she recalls her and Rick’s shared youth as camp counsellors. “Rick as a seventeen-­year-old was in his ultra-­religious phase,” Herself tells us. “He was pious, superior, argumentative, judgmental and immersed in the Torah. I thought he was annoying, and he most likely thought I was an evil witch.” Soulmates, in other words.

How this translates into the story by Salutin père et fils is the fun of Gideon’s Bible. A formerly serious and believing rabbinical student is now a humanist and atheist who nevertheless does not quite know how to abandon God, or at least the heritage of God. Gideon the son is not an atheist, or at least not yet, but he is clearly genetically programmed to be a challenger. The dialogue ranges over Gideon’s young life and his father’s inescapable march toward sage-like maturity. The layout of the pages is fun. Contemporary exegesis of classic tales — say, Jacob’s flight and his dream — comes in the illustrated dialogue around the text. Theology is hopelessly, and gloriously, mixed up with the here and now and the personal:

Gideon: How does he know God’s there when he wakes up?

Rick: He feels it. Some people think there’s a state of religious feeling not confined to any religion. You can call it God or something else or nothing at all. Sometimes it’s called awe. Heschel —

Gideon: Your guy at the seminary.

Rick: — called it radical ­amazement. Others named it the Mysterium Tremen­dum. That’s Latin for —

Gideon: I get it. Did you ever feel that?

Rick: I thought so, back then.

What’s so compelling about this and other passages is that the business of faith is never traduced, although religion itself comes in for a few whacks. Gideon Salutin was not taught any religion in his youth; it’s as if his dad was sufficiently bummed out by his own teenage and young man zealotry that, like many parents, he didn’t want to inflict his “mistakes” on his offspring. Nice try, Rick, but it never works, or hardly ever. As Philip Larkin famously observed, parents “fill you up with the faults they had / And add some extra, just for you.” Fortunately for Gideon Salutin, his “faults” are DNA-­crafted to stand up to the father’s occasional bombast, while Rick himself is a genuine odd duck: just when you think you have him pinned down, he will surprise you and make you shake your head about something that seems obvious and sensible but that never occurred to you before, or at least not in that particular light. Time and again, political and editorial pulpitry sheds contemporary light on these ancient texts, while illuminating the journey father and son are on.

Consider how Rick and Gideon, now firmly an adult, talk about Joseph revealing himself to his creepy brothers. You will recall, I am sure, that Joseph was sold into slavery in Egypt by those jealous siblings, but that he rose to become Pharaoh’s right-hand man.

Rick: There’s a midrash [a rabbinic interpretation of Bible stories] where Joseph says: The brother you think is dead is right here in this house. They look around and say, Where? He opens his arms and says: It’s me!

Rick: Then he says it was all part of the plan.

Gideon: If you believe God plans everything.

Rick: Think of it as: it all worked out in the end.

Here the dialogue is broken, to explain that the family cottage burned down in a winter lightning storm when Gideon was just five. When they rebuilt, Gideon got himself a treehouse and Rick a screened porch.

Gideon: I learned from that.

Gideon: Change takes time. At first I thought, You get the insurance. You get the plan, that’s it. But we went every weekend while Mike and his crew built it. There was always something new but there were new problems to solve.

Rick: When I was fired by The Globe and Mail after writing a weekly column for 20 years, we were at your karate class. You saw my face.

Rick: I told you and said it might be a good thing. You said

Gideon [as a child]: Like the fire at the cottage.

Gideon: They’re awful things you’d never choose to happen. But after, if it works out, you’re kind of glad.

Living in a time of plague, as we do, helps us understand the pull of Biblical journeys and the eternal question of where was — where is — everyone trying to go. The search for something beyond the freighted struggle for survival takes on even more significance and meaning. I don’t think either of the Salutins would argue that they have made a major foray into a deeper understanding of Biblical mysteries. They don’t have to. They have unpretentiously woven their own stories into an eternal one in such a magical way, it would almost make you want to take a guided tour of the Holy Land with the two of them sweetly nattering all along the way.